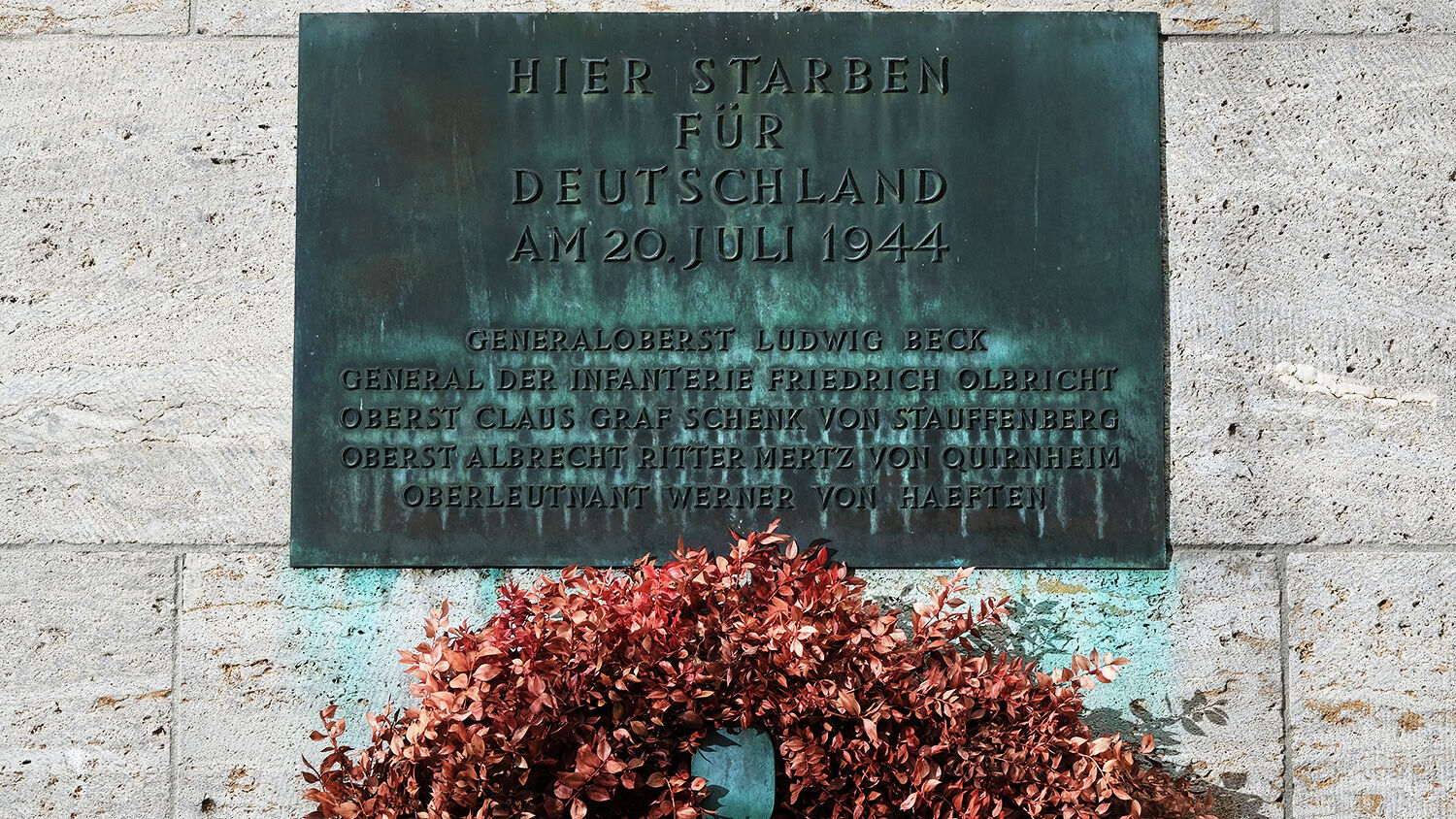 A wreath and memorial plaque to leading members of the World War ii German resistance hangs on a wall in the Bendlerblock courtyard, where the men were executed in Berlin, Germany.
Sean Gallup/Getty Images

Unless Germany learns where its old demons truly come from, it will never overcome them.

On Saturday, Germans memorialized those who attempted to assassinate Chancellor Adolf Hitler on July 20, 1944. As a German, I’m aware that the topic of resistance is emotional and controversial. In history classes, we frequently discussed the resistance to the Nazi regime. In recent years the conspirators against Hitler have been portrayed as heroes. In a video message about the 75th anniversary of the assassination attempt, current German Chancellor Angela Merkel praised these men as great role models for Germany.

This Saturday, 7/20, is the 75th anniversary of “Operation Valkyrie,” the assassination attempt on Adolf Hitler: https://t.co/yAxixcGrnE

“Only if we understand our history,” Ms. Merkel said, “we can also build a good future.” That is true. Germans have a glorious future awaiting them but not until they fully, deeply understand their history, rather than trying to rewrite it.

The facts are well established. On July 20, 1944, Col. Claus Schenk Count von Stauffenberg tried to kill Hitler with a bomb. The device exploded, but Hitler was only slightly injured. The next day, Stauffenberg and about 200 coconspirators were executed, the first of many. At his execution, Stauffenberg is reported to have said, “Es lebe das heilige Deutschland!” (“Long live holy Germany!”).

“They followed their conscience and thereby shaped a part of Germany’s history that otherwise would have been solely defined by the darkness of National Socialism,” Merkel stated on July 13. “We, too, have a duty today to stand up against all those tendencies that want to destroy democracy.” Every July 20, she added, “we remember all those who opposed national-socialism. Thankfully, there were many.”

Merkel said the resistance fighters can be seen as an example for Germans today. (In 2010, then Defense Minister Karl-Theodor zu Guttenberg claimed the resistance fighters serve as example for Germany’s army.) Merkel concluded that “without such actions, our constitution may not have come into existence.” Merkel carefully chose the wording of that sentence, because there is no proof to back it up.

Those are dangerously misleading statements if you understand the history of the resistance fighters.

Stauffenberg’s courage to stand up against a powerful evil dictator is admirable. But portraying him as a hero for democracy is dangerous. All indications are that the establishment of democracy was not on his mind at all. Stauffenberg’s past, his inner circle, the timing of the attempted assassination, and his plans for Germany after Hitler all speak against him as a true liberator.

Stauffenberg was a Nazi, and so were his coconspirators. Their motives for killing Hitler are highly disputed in Germany. To say that he and other resistance fighters contributed in some obscure way to the establishment of democracy is a total illusion. What brought democracy and the constitution into existence was the Allied victory. Stauffenberg’s primary goals were to prevent Allied forces from entering Germany and to retain as much conquered territory as possible in a negotiated settlement to the war.

Andrew Roberts writes in The Storm of War, “Far from acting out of democratic values, however, the majority of the plotters were simply trying to remove an incompetent corporal [Hitler] who they realized was the major impediment to a negotiated peace, which objectively speaking was Germany’s only hope of preventing a Soviet occupation.”

After Germany’s defeat in World War i and the subsequent Versailles Treaty, Stauffenberg’s family lost many of its nobility rights. While serving in Africa during World War ii, Stauffenberg lost a hand, two fingers and his left eye in combat. He initially viewed Hitler as a man who could bring back some of Germany’s lost glory. At what point Stauffenberg’s mind changed from loyal supporter to resistance against Hitler is unknown. But the undeniable fact is that he joined the plot only after it became clear that Germany would lose the war.

Many of those he conspired with were anti-Semites and hated democracy as much as they hated Hitler. They had risked their lives conquering other nations. Never did they stand up to the evils at home. They watched the deaths of millions of Jews, the killing of innocent citizens in conquered nations, and the executions of their own comrades. Many of them ordered these atrocities. Some may have disagreed with Hitler’s brutality to one degree or another, but their real goal in stopping Hitler was to prevent another defeat and unconditional surrender to Allied forces.

The conspirators’ fear of defeat grew even stronger after the Allies landed in France on June 6, 1944. Facing Soviet Russia in the East and the Allied forces on the West European mainland, defeat was inevitable. But the generals knew Hitler would never surrender until the entire nation was destroyed and all hope for negotiating peace was lost. At this point, some in the military were willing to allow the Allies to take over Germany to end the madness, but not Stauffenberg. He worked with increased urgency to stop Hitler.

Stauffenberg’s plan was to assassinate Hitler, get control of the military, appoint a new chancellor, and negotiate a peace treaty that would secure the territory that Germany had already conquered.

If Stauffenberg had succeeded in the attempted assassination, Germany’s subsequent history would have obviously changed, but it would not have become the constitutional democracy Chancellor Merkel indirectly implied. Germany may have ended the war earlier, but it would not have ended Nazism, as some would like to think. In fact, Nazism didn’t even end after the Allied forces conquered and occupied Germany and tried to eradicate it. (Read “The Nazi Underground—Revealed!” and Germany and the Holy Roman Empire.)

Portraying the resistance fighters as heroes is a dangerous attempt at “rewriting Nazi history.” Merkel may attempt to rewrite this history in an effort to oppose right-wing extremism today, but Germans will never be able to build a better future until they understand, rather than rewrite, their own history!

Stauffenberg and his colleagues are not the true heroes of World War ii. There were Germans who risked their lives to oppose Hitler and save lives, but they were few and persecuted. The true liberators of Germany were the men who landed in Normandy, France—the very men Stauffenberg opposed! Those soldiers were the ones who broke open Germany’s concentration camps. They risked their lives, not to save an evil German empire with slightly different leadership, but to liberate all Europe and the world. Those men put an end to Germany’s warmongering, mass exterminations and cruelty.

But even the men of D-Day only brought temporary peace.

Believing that Germany could have been liberated without outside intervention is a fantasy. It’s an attempt to make people believe that the only problem in Germany is a few extremists. But believing the nation’s current problems are caused by a few extremists is as dangerous as believing Germany’s World War ii history is solely Hitler’s fault.

Such a shallow understanding of history and the present is dangerous. Germany’s Nazi problem goes much deeper. In order to overcome its old demons, Germany must understand where they come from.

The Bible reveals that every person on Earth is capable of unbelievable evil (Romans 8:7). Germany’s history shows that its people are capable of terrible destruction. The Bible calls Germany, anciently and today, “the worst of the heathen” (Ezekiel 7:24). But all the crimes and atrocities that the Assyrians of old and the Germans of our time have committed have been inspired by “the god of this world,” Satan the devil (2 Corinthians 4:4).

Unless Germans realize that their ancestors have been and they themselves are influenced by that evil being, they will not be able to build a prosperous future.

We can only turn to God when we learn from history. Germany one day will do just that. There are many prophecies in the Bible that show that Germany has a glorious future (Isaiah 19:23-25). In fact, this future awaits everyone who has ever lived and is willing to obey God.

This may sound too wonderful to be true, but God will bring it about. In fact, He is preparing a few teachers to teach this history to all mankind. This truth is explained in Mystery of the Ages, by Herbert W. Armstrong. As a result of God’s coming educational program, mankind will come to fully understand its history and will consequently build a most prosperous future. Request your free copy of Mystery of the Ages and learn about God’s master plan for mankind.