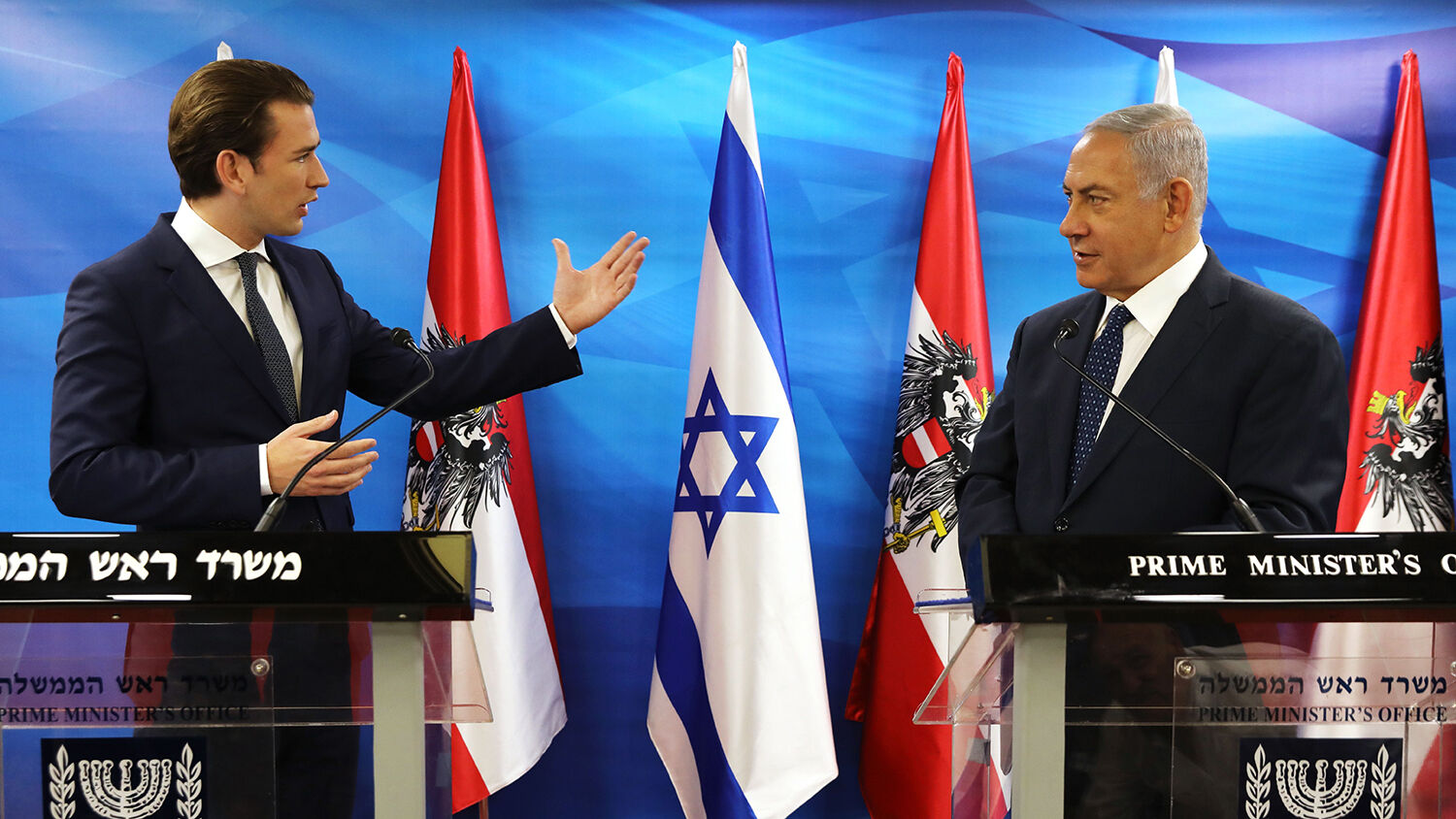 Will Sebastian Kurz fulfill the hopes of Benjamin Netanyahu?

Austria’s history is stained with anti-Semitism. For decades, Austrian leaders have despised many of the Jews’ policies. Europe as a whole has historically shared this viewpoint. But we are now witnessing what could be a historic turning point, a change hinging on one man: former Austrian Chancellor Sebastian Kurz.

Israeli Prime Minister Benjamin Netanyahu welcomed Kurz to Jerusalem on July 10 as a “tremendous friend of the State of Israel, a champion of fighting anti-Semitism, a great leader for Austria.” Throughout his years as Austria’s foreign minister and chancellor, Kurz has built a personal relationship with Netanyahu.

Prime Minister Benjamin Netanyahu met with former Austrian Chancellor @SebastianKurz.
“You have been a tremendous friend of Israel, a champion of fighting antisemitism, a great leader for Austria. It’s good to see you again, back in Jerusalem. You are warmly welcomed as a friend” pic.twitter.com/6bMMVsdD9F

In their meeting, the two leaders discussed the challenges of the refugee crisis, terrorism and Iran’s pursuit for nuclear weapons. “I am very concerned about Iran’s statement to want to enrich more uranium,” Kurz told Austrian reporters after his meeting with Netanyahu. He also said that Austria would act with Europe, “united and determinedly,” against Iranian nuclear ambitions.

Thank you, Prime Minister @netanyahu, for our productive meeting! We discussed border management measures & the prevention of illegal migration. #Israel’s security is a top priority for us and it is vital that #Iran complies to all elements of the nuclear agreement. pic.twitter.com/TRmgtWlhq0

In 2018, Kurz impressed Netanyahu when he visited the Wailing Wall and gave a passionate speech about Austria’s commitment to stand with Israel. The security of Israel, Kurz said, is “a matter of state” and a moral obligation for Austria. “As Austrians, we will support Israel whenever it is endangered,” he promised. This was viewed as an enormous sign of friendship and reconciliation. Netanyahu responded that Kurz should encourage his European Union colleagues to do the same.

With the exception of United States President Donald Trump, few other Western leaders have shown solidarity with Israel. Most, in fact, have shown themselves quite hostile toward this sole democracy in the Middle East. In 2017, 78 percent of all country-specific resolutions of the United Nations were directed against Israel, according to the UN-Watch organization. That percentage was even higher in previous years.

In the midst of Arab and Western hostility, Kurz’s support for Israel seems to be a breath of fresh air.

After Iran publicly violated the 2016 Joint Comprehensive Plan of Action, Netanyahu wrote on his social media accounts: “Apparently, there are some in Europe who won’t wake up until Iranian nuclear missiles land on European soil. Then it will be too late.”

Netanyahu greatly desires that more European countries follow Kurz’s example. And he is not the only one who wants this.

Our generation must take its responsibility very seriously and never forget the horrible crimes of the #Shoah. I am absolutely committed to ensuring the safety of Jews in Austria, #Israel and all over the world. pic.twitter.com/f1XE2YGarH

Germany’s influential former defense minister, Karl-Theodor zu Guttenberg believes Europe is not doing enough in the Middle East. He presents himself as a friend of Israel and is a cofounder of the Friends of Israel Initiative. The initiative’s website states that its founders are most concerned “about the onslaught of radical Islamism, as well as the specter of a nuclear Iran, both of which threaten the entire world.”

Kurz and Guttenberg both call for Europe to take a stronger stance against Iran and to ally with Israel. Bible prophecy foretells that this will happen. Right now, Kurz is leading the way in the fulfillment of these prophecies.

Trumpet editor in chief Gerald Flurry explains in his free booklet The King of the South that Iran will soon lead an Islamic power bloc that threatens Israel and pushes against Europe. Bible prophecy foretells that Europe will confront this radical Islamic power (Daniel 11:40). Although many in Israel will view Europe’s war against Iran with gratitude, Europe’s ambitions are not altruistic.

The Bible reveals that Catholic Europe wants to control the Holy Land. Posing as a peacekeeping force, the armies of German-led Europe are prophesied to surround Jerusalem (Daniel 11:41, 45). Israel will view the emerging European superpower as its ally (Ezekiel 16), despite the fact that Germany and Austria have committed some of the worst crimes against Jews in history. It “seems the Israelis can trust their worst historical enemy, but they can’t trust God to protect them! And God is their only source of help,” Mr. Flurry writes in Hosea—Reaping the Whirlwind. He continues:

Still, Israel continues to be “lovers” with the Germans. Soon it will go to the Germans in far greater desperation. This will lead to its destruction. It is not the Arabs who are going to destroy it. The friendship between Germany and the biblical nations of Israel is going to lead to one of the biggest double-crosses in human history!

We are about to see the most devastating betrayal in history! Just as sure as Europe will present itself as Israel’s ally, it will yet again betray the Jews! But in the end, it is God who allows this to happen. Notice Hosea 5: “I will go and return to my place, till they acknowledge their offence, and seek my face: in their affliction they will seek me early” (verse 15).

Hosea recorded Israel’s response: “Come, and let us return unto the Lord: for he hath torn, and he will heal us; he hath smitten, and he will bind us up” (Hosea 6:1).

This prophesied double-cross will punish the Jewish people and the other descendants of the ancient Israelites. Because of this suffering, they will learn to stop trusting deceitful “lovers” and instead trust God. This astonishing turnaround will lead the whole world to repentance.

To learn more, request a free copy of Hosea—Reaping the Whirlwind, by Gerald Flurry. Mr. Flurry explains in detail why the Israelis should not put their trust in Europe. To learn more about Europe’s centuries-long ambition to rule Jerusalem, read “Sebastian Kurz Sets His Sights on Jerusalem.”