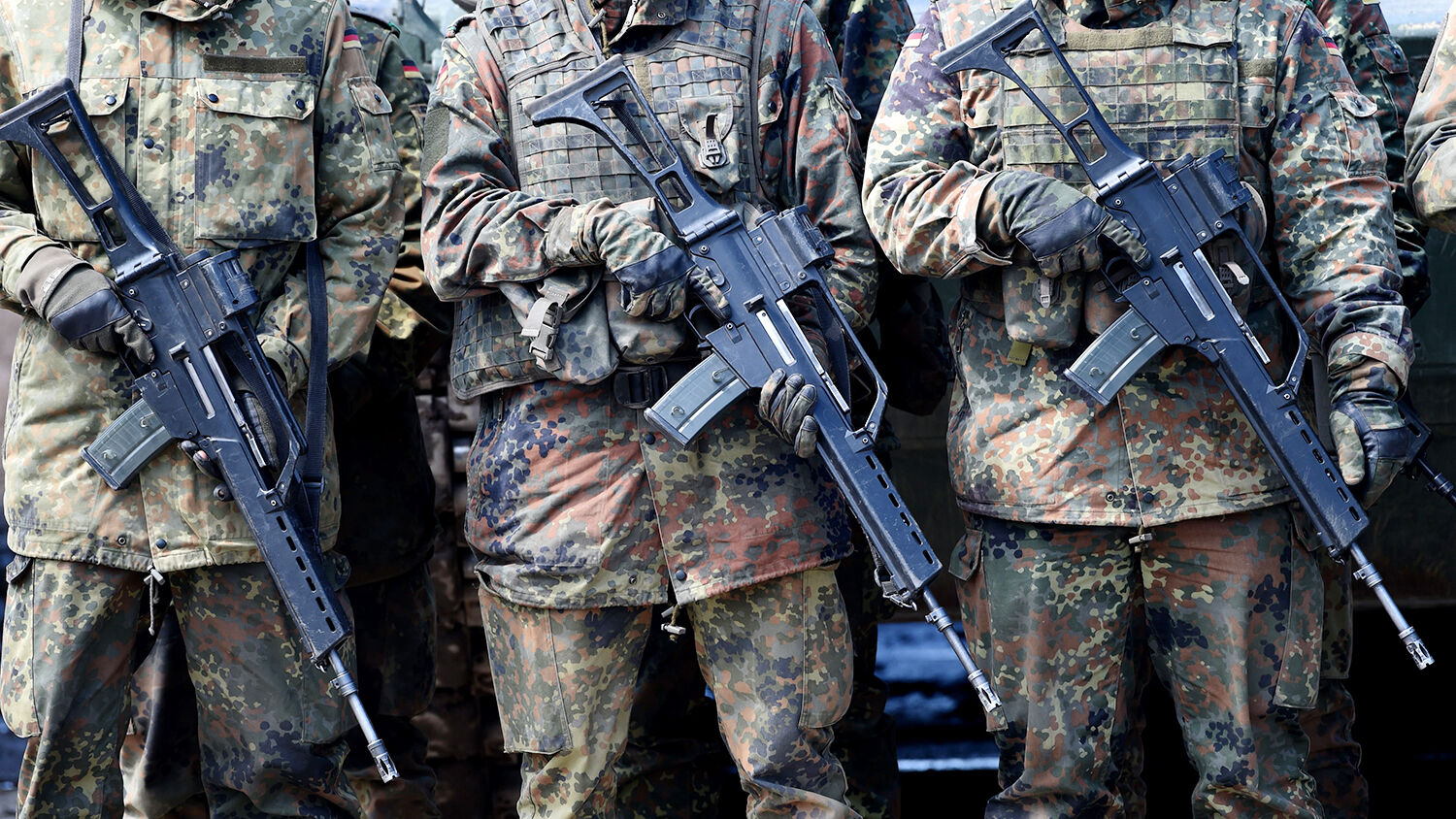 Soldiers of the German Bundeswehr hold HK G36 rifles during a practice of the Very High Readiness Joint Task Force, which is part of a nato tank unit, at the military training area in Munster, Germany, on May 20.
PATRIK STOLLARZ/AFP/Getty Images

Arms export licenses granted in Germany this year have already surpassed last year’s total, according to data published by the German Economic Ministry on July 11. Authorities approved $6.1 billion in arms exports in the first six months of this year; the total for all of last year was $5.4 billion.

Both countries are actively involved in Yemen’s civil war.

The German government said it would ‘immediately’ stop selling weapons to all parties involved in the war in Yemen - including major buyer Saudi Arabia https://t.co/tJOloGMiJ9 pic.twitter.com/mqs2cNumE7

The rhetoric German politicians use to discourage arms sales to conflict zones is clearly not being followed in practice. Germany-Foreign-Policy.com wrote: “The current figures refute the grand coalition’s recurring assertion that it is committed to a restrictive arms export policy.”

The website said that the newly released figures confirm that Germany’s military exports continue to follow a long-term pattern of growth, despite the various dips in exports that occurred in 2018, which German-Foreign-Policy.com attributed to the splintering government coalition. It noted that the primary issue stopping exports was a backlog of export licenses waiting for approval.

How is Germany achieving such high arms export numbers?

According to German-Foreign-Policy.com, it has been taking advantage of a backdoor.

“… German defense companies started long ago to relocate production abroad in order to avoid restrictions on arms exports from the federal republic,” wrote the website (Trumpet translation). The biggest defense company to do this is Rheinmetall. Though based in Dusseldorf, it now supplies vast quantities of ammunition to Saudi Arabia via its subsidiary companies rwm Italia and Rheinmetall Denel Munition (South Africa).

Not all of Germany’s arms exports go to Saudi Arabia and Yemen. Last year, Hungary was the leading customer for German tanks, ordering 44 Leopard main battle tanks and 24 self-propelled artillery systems. This year, Hungary has already contracted nearly $2 billion worth of German weapons exports—more than any other country. Germany’s exports strengthen Europe even as they strengthen its strategic partners in the Middle East.

Small arms exports are also increasing, though not through Germany directly. The German government stated that it should no longer export small arms to countries outside the European Union and nato. Accordingly, small arms sales decreased from $47 million in 2013 to $451,000 in 2018.

But the sale of German-designed small arms to countries outside the EU and nato is actually still increasing. The only difference now is that German firms have moved production to outside the country to such places as the United States and Mexico.

Current data on Germany’s arms exports is notoriously difficult to find. Information on major deals is always released after the deal has already been made. According to German Arms Trade, an independent research database, some dual-use technologies, such as engines powering German-made ships and tanks, do not need export licenses, meaning their production is not affected by Germany’s policy on arms exports.

Germany’s “restrictive” arms export policy is prevalent in its rhetoric but a lot less common in reality.

While many in Germany are calling for reduced military exports, the opposite is happening. Where is Germany’s arms export policy taking the world?

It is leading to a clash with Iran.

The nations that are importing German weapons are largely Arab nations that are fighting Houthi rebels in Yemen. The Houthis are supported by Iran, the world’s foremost terrorist-sponsoring nation. Iran has recently used its breach of the nuclear deal to blackmail Europe for help against U.S. sanctions.

Trumpet editor in chief wrote in April 2013, “Northern Africa is turning into a battleground with enormously important prophetic implications.” He drew attention to Iran’s proxies causing conflict in the region, warning that “Iran isn’t the only one interested in Africa. Germany is making strong inroads as well. Both of these powers are racing to get as much control of North Africa as they can. They will inevitably clash with each other.”

By increasing arms exports to moderate Arab states, Germany continues to make inroads into the Middle East in preparation for this clash.

How did Mr. Flurry accurately describe today’s events in 2013?

He used Bible prophecy. Notice what he wrote in “A Mysterious Prophecy”:

“For they have consulted together with one consent: they are confederate against thee: The tabernacles of Edom, and the Ishmaelites; of Moab, and the Hagarenes; Gebal, and Ammon, and Amalek; the Philistines with the inhabitants of Tyre [Lebanon]; Assur [Assyria or Germany] also is joined with them: they have holpen the children of Lot. Selah” (Psalm 83:5-8). Here are the modern names of these nations, as taught at Ambassador College under Herbert W. Armstrong: Edom—Turkey; Ishmaelites—Saudi Arabia; Moab—Jordan; Hagarenes—anciently dwelt in the land known as Syria today; Gebal—Lebanon; Ammon—also Jordan.

Psalm 83 prophesies that Saudi Arabia and other Arab states will align with Germany. This alliance will oppose and conquer Iran and have major consequences for the world you live in.

To understand more about the prophetic significance of German weapons exports, read “The Whirlwind Prophecy,” by Gerald Flurry.