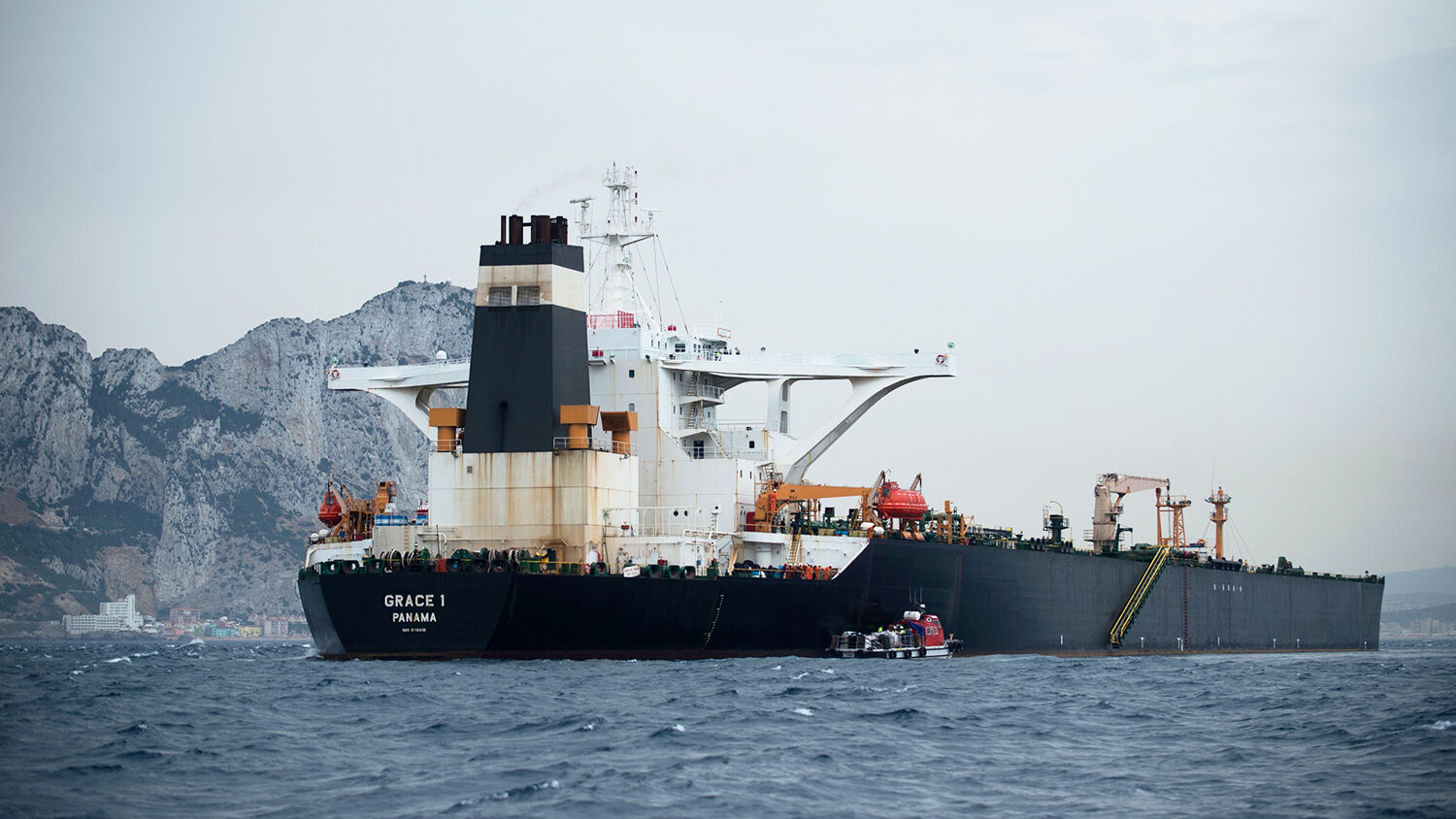 jerusalem
The United Kingdom essentially joined the United States last Thursday in its high-pressure campaign against the Iranian regime when it decided to impound a massive Iranian oil tanker sailing off the coast of Gibraltar.

Yesterday, the Islamic Revolutionary Guard Corps attempted to return the favor when it momentarily blocked the path of a UK tanker, the British Heritage, before being forced to stand down by a Royal Navy frigate.

Britain’s decision to impound the Iranian tanker and its forthright response to Iran’s Revolutionary Guard underscores a huge shift in British policy toward Iran, one that is emboldened by a growing relationship with the U.S.

Gatekeeper of the Mediterranean

Known as the “Rock,” the tiny British enclave of Gibraltar, which overlooks the entrance to the Mediterranean, has been a critical asset to Britain since Spain ceded the territory in 1713. In the early hours of July 4, over 300 years later, Britain proved that Gibraltar still retains strategic value when it directed 30 Royal Marines to board Iran’s Grace 1 tanker as it sailed into the Mediterranean Sea.

The vessel was due to offload its cargo of Iranian oil at Syria’s Banyas Refinery, contravening European Union sanctions imposed on Syria in 2011. So Britain decided to act.

“That refinery is the property of an entity that is subject to European Union sanctions against Syria,” noted Gibraltar’s chief minister, Fabian Picardo, in a statement. “With my consent, our port and law enforcement agencies sought the assistance of the Royal Marines in carrying out this operation.”

While the decision to detain the vessel was about enforcing sanctions on Syria, Britain was clearly going after Iran. Britain confirmed that Grace 1 is filled to capacity, holding 2 million barrels of oil as it sits at anchor off the coast of Gibraltar.

While the Royal Navy was acting within its mandate to impound the vessel, its decision to do so took most by surprise, especially Iran.

It’s doubtful that Iran anticipated the UK would have the courage to pull off such a move. For years, the UK has shared Europe’s dovish position on Iran, rather than following the U.S.’s more confrontational approach.

Matthew Oresman, commercial sanctions adviser, highlighted Britain’s unexpected intervention, as reported by the National, “This is the first time that the EU has done something so public and so aggressive. I imagine it was also coordinated in some manner with the U.S., given that nato member forces have been involved.”

Indeed, it makes sense that the U.S. was aware of what the UK was planning and perhaps worked together with Britain.

Shortly after Britain captured the ship, U.S. National Security Adviser John Bolton tweeted, “Excellent news: UK has detained the supertanker Grace 1 laden with Iranian oil bound for Syria in violation of EU sanctions. America and our allies will continue to prevent regimes in Tehran and Damascus from profiting off this illicit trade.”

Excellent news: UK has detained the supertanker Grace I laden with Iranian oil bound for Syria in violation of EU sanctions. America & our allies will continue to prevent regimes in Tehran & Damascus from profiting off this illicit trade.

The fact that Grace 1 was even near Gibraltar is a result of the reinstatement of U.S. oil sanctions on Iran.

Ships usually travel from the Persian Gulf through the Red Sea and Suez Canal to reach the Mediterranean Sea, a 4,100-mile journey from Iran to Syria. But since the start of 2019, Iranian oil vessels traveling to Syria were denied access through the Suez Canal.

Grace 1 was forced to take the 14,500-mile trip around Africa, an expensive but still profitable voyage for supplying much-needed oil to Syria, Iran’s ally.

Britain’s bold move, however, didn’t come without the risk of Iranian retaliation against British assets.

After Britain impounded the Grace 1, Iranian Expediency Discernment Council Secretary Mohsen Rezaee tweeted that “if the UK does not release the Iranian oil tanker, our officials are duty-bound to reciprocate and seize a British oil tanker.”

Before reports surfaced of Iran’s attempted seizure of the British Heritage, the UK was already moving to protect its assets in the Persian Gulf.

The Times reported on July 9 that a Royal Navy frigate, hms Montrose, escorted an Isle of Man-flagged tanker as it passed through the Strait of Hormuz into the Gulf of Oman. But by early afternoon, the hms Montrose was called to protect the British Heritage from an attempted Iranian seizure as it transited the Strait.

After the incident, the UK Ministry of Defense stated that “contrary to international law, three Iranian vessels attempted to impede the passage of a commercial vessel, British Heritage, through the Strait of Hormuz.”

“hms Montrose was forced to position herself between the Iranian vessels and British Heritage and issue verbal warnings to the Iranian vessels, which then turned away,” the statement said. Media reports indicated that aiming the Montrose’s 30-mm guns at the attack boats also encouraged the Iranians to stand down.

Before deciding to impound Grace 1, British leaders must have modeled the very scenario of brinkmanship that played out in the Persian Gulf yesterday. Yet Britain still decided to act.

From what we can gather via @MarineTraffic AIS readings, the British Navy’s HMS Montrose sailed alongside the British Heritage from UAE’s west coast through the Strait of Hormuz and then BH continued into Gulf of Oman. At 17:42 UTC (2019-07-10), HMS Montrose slowed down abruptly. pic.twitter.com/w2DNQiAbv7

This is not the usual slow-moving, timid British foreign policy that we are used to. Three times between 2004 and 2009 British Navy soldiers or marines have been taken captive by Iranians while working inside the Persian Gulf. But not yesterday.

For its part, Iran did go through with its attempted seizure of the British Heritage, even though it was being flanked by hms Montrose.

As Jerusalem Post analyst Seth Frantzman wrote today, perhaps Iran was testing whether the UK would fold under pressure. “Iran is brazen. If the reports are accurate, its attempt to harass the tanker was done openly and done with full knowledge of the presence of the British Navy to test the UK’s response and also to see if the U.S. is serious about its international coalition.”

These two actions, impounding Grace 1 and not standing down when provoked by the Iranian fast boats, indicate that Britain has deliberately chosen a firmer course on Iran. And given that the frontrunner to be Britain’s next prime minister, Boris Johnson, supports a tough response on Iran, it is likely to stay that way. In an interview with the Jewish Press, Johnson stated, “I certainly think you could not fault the UK government for being tough on Iran’s sanction busting. As prime minister, I’d make sure we continue to do everything we can to constrain Iran’s disruptive behavior in the region.”

Just how far Mr. Johnson or Britain’s current leadership is willing to go to constrain Iran is yet to be seen. However, it becomes far easier to act boldly against Iran when you know the resurgent U.S. is doing the same. Britain’s newfound international confidence is, in part, a result of the boldness of its longtime ally.

But there is another related reason.

As noted by Trumpet editor in chief Gerald Flurry in his article “Saving America From the Radical Left—Temporarily,” the election of U.S. President Donald Trump has led to a temporary resurgence of the U.S., both internally and abroad. Mr. Flurry wrote, “Donald Trump has proved himself willing to take a stand where others have not. It is quite something to behold him resisting these anti-American forces! … When you compare what this president is doing to what his predecessor did, there has been a clear change in direction, one that will slow the speed at which America is being pulled apart.” The forecast of a resurgent U.S. under President Trump is based off an ancient prophecy found in 2 Kings, which is explained in his article.

As we addressed in our August issue of the Trumpet, Mr. Trump’s high-pressure campaign against Iran appears to be working. While Bible prophecy shows that Iran will not be restrained in the long term, it is possible that suffocating U.S. sanctions could temporarily chasten Iran.