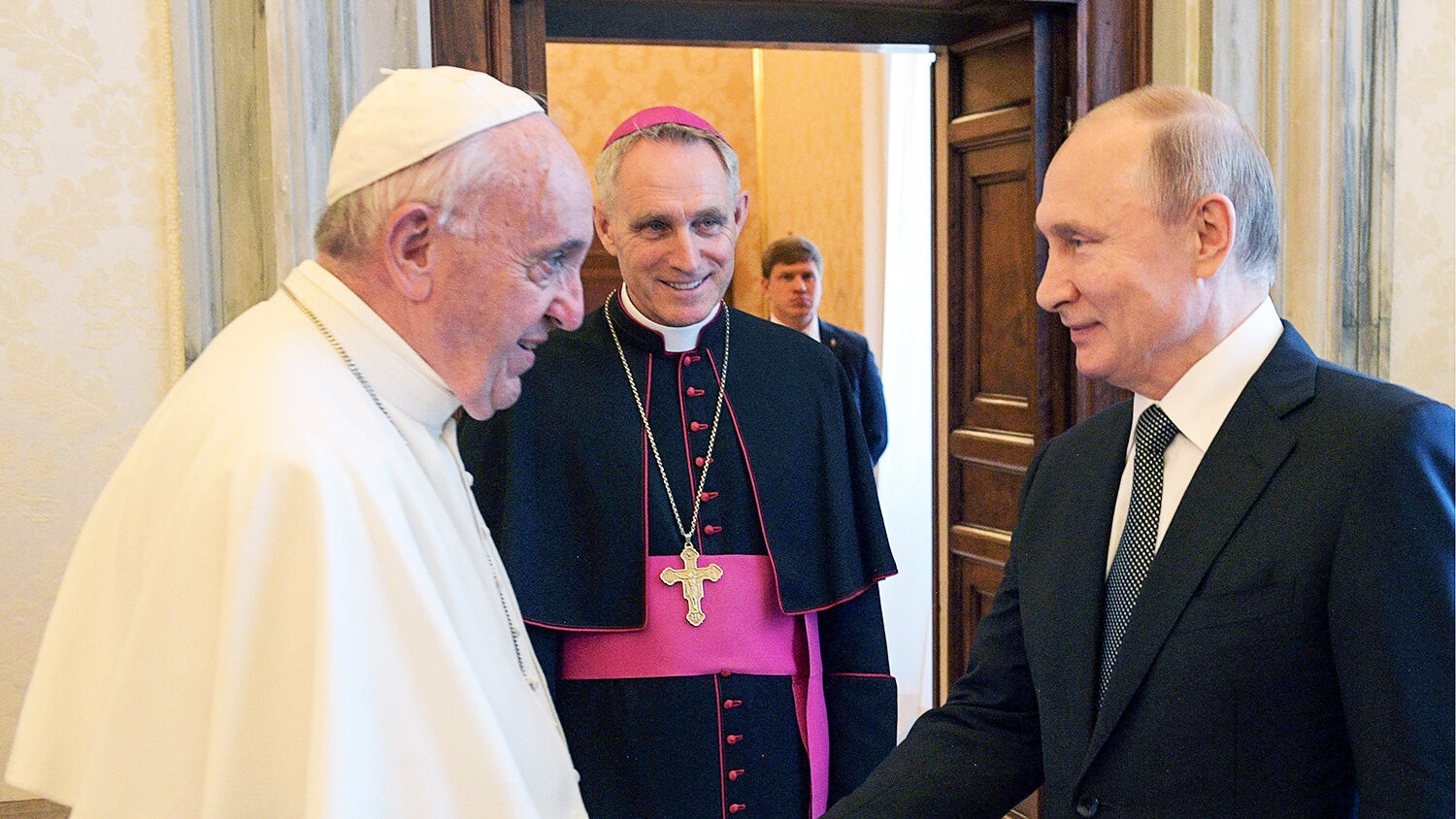 A possible answer to the mystery baffling news commentators

Russian President Vladimir Putin met with Pope Francis at the Vatican on July 4. This is his third meeting with the pope—a high number for a dictator who is closely allied with the Orthodox Church, which split from the papacy almost 1,000 years ago.

The meeting was private and little is known about what was discussed. But the situation in Ukraine was expected to be high on the agenda. A statement released by the Vatican said that the pair discussed the situation in Syria, Ukraine and Venezuela, as well as “the life of the Catholic Church in Russia.”

Following the meeting, Putin met with Italy’s president and prime minister. While speaking with Prime Minister Giuseppe Conte, Putin asked for help in improving relations between Russia and the European Union. In particular, he called for an end to EU and United States sanctions that have cost his country $50 billion since 2014. Putin claims, however, that the EU has suffered even more with limited access to the Russian market. Conte offered his support in improving relationships between Russia and the EU.

This political and religious relationship between Russia and Europe has been improving for several years.

In February 2016, Pope Francis met with Patriarch Kirill, leader of the Russian Orthodox Church. This was the first time leaders from these two churches had met since the Great Schism of 1054.

The meeting between Pope Francis and Patriarch Kirill wasn’t just about religion. It was about geopolitics. https://t.co/L00NZ7dXle

Many regard the Russian Orthodox Church as essentially a tool of the government. There is unconfirmed evidence that Kirill is a former kgb agent, and definite evidence that many church leaders were kgb agents.

Putin, a former kgb agent himself, has used the Russian Orthodox Church as a political tool to rally Russians around his vision for their country. And now Putin appears to be getting the Catholic Church on his side. This warming relationship began to appear when Putin first met Pope Francis in November 2013. The same month, Ukraine unexpectedly suspended preparations to join the EU. Then came March 2014: Russia invaded Ukraine, and the Vatican remained silent. In February 2015, the pope condemned the “fratricidal violence,” implying that Ukraine was in the midst of a civil war, rather than identifying the foreign invasion. In June 2015, Putin met Francis for a second time.

The Trumpet has long expected Russia and a German-led Europe to make some kind of a deal. The Vatican, which often plays a very public political role, could be a big part of making that happen.

History warns us of exactly what to expect from a deal between Germany and Russia.

In the lead-up to World War ii, both Russia and Germany had growing imperialistic dreams. Secret cooperation under the 1922 Treaty of Rapallo allowed them to use each other’s expertise to advance militarily and without fear of being stabbed in the back. So when the leaders of Germany and Russia came together in 1939 to sign the Molotov-Ribbentrop Pact, the two were already old friends. This “non-aggression pact” split Eastern Europe between Russia and Germany and led to worldwide Communist support of the Nazi regime. That is until Hitler turned on the Russians in 1941.

This short snippet of history reveals the nature of centuries of Russo-German relations. They rapidly swing from best friends to worst enemies.

We see the same pattern repeating today. Europe, with Germany and the Vatican leading, is increasingly collaborating with Russia: inviting it back into Europe’s Human Rights Council, building the Nord Stream 2 pipeline, and holding discussions with the Italian prime minister about furthering Russia’s relations with the EU, for example.

Europe and Russia have several intersecting interests that have the potential to cause a lot of friction—fuel, a common border on Eastern Europe, etc. They need a deal to ward off the other’s threats. The Vatican could be helping make this happen.

The Bible prophesies that the last resurrection of the Holy Roman Empire is forming in Europe today. The Vatican forms the “holy” part of this otherwise political union. Revelation 17:1-5 describe a woman (symbolizing a church) riding a scarlet-colored beast. This “whore,” as verse 1 calls her, is the Catholic Church that rides, or heavily influences, the German-led European political beast. (To prove this biblically prophesied church-state union, please read our free booklet Germany and the Holy Roman Empire.)

The presence of a deal between these two nations is not a sign of peace. Like the Molotov-Ribbentrop pact, and so many others before it, it is a sign of exactly the opposite. Both of these nations are looking to secure their shared border—so they can pursue their imperialistic aims elsewhere! It is a precursor to war!

This is why the Vatican’s cooperation with Russia is so concerning. Europe, and especially Germany, has been increasingly collaborating with Russia. And now Putin has made a third visit to Pope Francis, one of the most influential political players in Europe.

Watch this increasing collaboration: It is “a precursor to war!” The Bible shows that the imperialistic dreams of Russia and Europe will soon affect the entire world. To understand why Europe and Russia are working together and where it will lead, please read Mr. Flurry’s article “Germany and Russia’s Secret War Against America.”