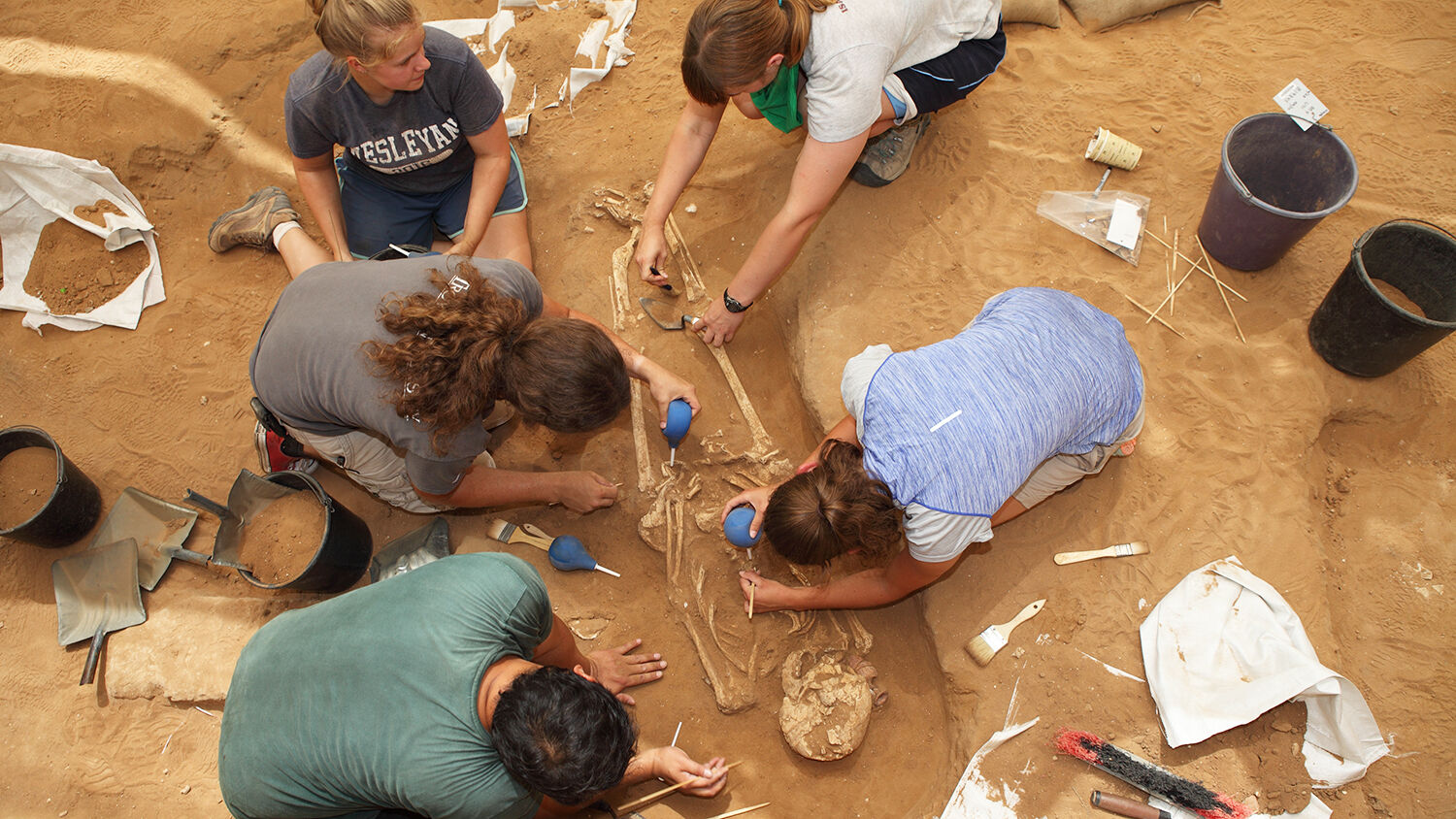 A team of archaeologists extract skeletons at the excavation site of the first Philistine cemetery ever found on June 28, 2016, in the Mediterranean coastal Israeli city of Ashkelon.
MENAHEM KAHANA/AFP/Getty Images

But you won’t find that in the reporting or the scientific study.

jerusalem
Hundreds of news sources picked up on a recently published study claiming the Philistines were immigrants from southern Europe. But none, at least from my reckoning, drew attention to the most compelling aspect of the study.

That is: The Philistines likely came from exactly where the Bible says they came from—ancient Crete.

Instead of drawing attention to the Bible, articles covering the July 3 study stressed the general “southern European” origins for the ancient Philistines.

Take a look at these headlines:

These headlines are factual and true, but they simply don’t go far enough.

To be fair, it wasn’t the editors’ fault. The authors of the study didn’t connect the Bible to its results either; strange, since the Bible is the best historical source for understanding both the origin and culture of the Philistines.

The eighth-century b.c. prophet Amos wrote, “Are ye not as children of the Ethiopians unto me, O children of Israel? saith the Lord. Have not I brought up Israel out of the land of Egypt? and the Philistines from Caphtor, and the Syrians from Kir?” (Amos 9:7).

One hundred years after Amos, Jeremiah recorded, “Because of the day that cometh to spoil all the Philistines, and to cut off from Tyrus and Zidon every helper that remaineth: for the Lord will spoil the Philistines, the remnant of the country of Caphtor” (Jeremiah 47:4).

The Bible says that the Philistines, at least in part, came from Caphtor. Any good Bible atlas or dictionary will tell you that Caphtor is associated with the Mediterranean Island of Crete, just south of Greece.

But what does the report say?

The groundbreaking study, “Ancient DNA Sheds Light on the Genetic Origins of Early Iron Age Philistines,” analyzed the dna from 10 different ancient people discovered in excavations on the southern coast of Israel. These people were all buried in Ashkelon, one of the five major cities of the Philistines.

Three of the people were carbon-dated to around 1600 b.c. give or take 100 years. These early inhabitants of Ashkelon had similar dna to those from eastern Mesopotamia or Anatolia (the area of modern-day Turkey).

The next four individuals were dated to around 1250 b.c. with a similar margin of error. Unlike the earlier group, these Ashkelonites had similar dna to southern Europeans, rather than the local population.

The final three people were dated to around 1000 b.c. However, their make-up was different again, with the “European” dna being largely bred out of the population.

The authors summarized their findings this way:

We find that all three Ashkelon populations derive most of their ancestry from the local Levantine gene pool. The early Iron Age population [1250 b.c. group] was distinct in its high genetic affinity to European-derived populations and in the high variation of that affinity, suggesting that a gene flow from a European-related gene pool entered either at the end of the Bronze Age or at the beginning of the Iron Age. Of the available contemporaneous populations, we model the southern European gene pool as the best proxy for this incoming gene flow.

Or more simply, the study shows that there was an influx of foreigners from “southern Europe” sometime after 1600 b.c. and before 1250 b.c. (again, give or take 100 years). In itself, this discovery is noteworthy and complements what we already know from the material culture of the Philistines. As the authors bring out, the now-proven fact that the Philistines were from southern Europe is also indicated by the Philistine’s Greek-like culture (for more on this please read “Uncovering the Bible’s Buried Civilizations: The Philistines”).

However, it seems like the study’s conclusions and definitely the reporting on the study don’t go far enough.

I don’t pretend to understand all the nuances involved in comparing the genome of ancient individuals. However, in reading through the fine print of the study, something jumped out at me that is surely most important. This part of the study compared the “southern European infused” Philistines to their closest relatives elsewhere.

And guess where the most similar people are found?

Buried under the subhead “Genetic Discontinuity Between the Bronze Age and the Early Iron Age People of Ashkelon” it says:

The best-supported one infers that [the ‘European Philistines’] derives around 43 percent of its ancestry from the Greek Bronze Age ‘Crete_Odigitria_BA’ and the rest from the [earlier local population].

Surely the fact that the closest match they found in the study comes from Crete—right where the Bible says—deserves a mention.

But you won’t find it mentioned in any of the articles, apart from a passing reference in this one. The article quoted Ashkelon excavator and participant in the dna study Dr. Daniel M. Master, who concedes that while not enough evidence is in, the best matches come from Crete. The article stated (emphasis added):

With the new dna study, researchers are getting ever closer to empirically pinpointing the Philistines’ exact origins, but require more ancient dna samples from the Aegean to provide a precise location.

Cautious not to over-reach from the study’s general impressions, Master said that there are “better matches from Crete,” emphasizing that until there are more samples available, “at the moment we cannot prove the specific location from whence they came.”

If the best matches are from Crete, as the study and Dr. Master attest, then why aren’t more people reporting it? And why isn’t that in the abstract for the paper or even in the conclusion. Why bury it in the middle of the study?

Of course, four bodies from Ashkelon is not a huge sample size. And more information needs to be gathered.

No one is asking for a screaming headline stating, “BIBLE PROVED TRUE!” But how about writing something like “From our limited sample size, it looks like the Bible is correct in stating that the Philistines came from Crete”?

The Bible mentions a place called Caphtor, which is probably modern-day Crete. There’s no connection between the ancient Philistines & the modern Palestinians, whose ancestors came from the Arabian Peninsula to the Land of Israel thousands of years later. https://t.co/FKqqoQRWdx

Instead, the biblical text is ignored almost entirely. That is astounding, considering it is the best-written source of history for the Philistines.

Without a doubt, every person involved in the dna study, and likely most of those excavating at Ashkelon, down to the humble square volunteer, is aware of what the Bible says about Philistine origins. Most of the excavators at Ashkelon are likely motivated to dig in the Middle East dust because, at some level, they believe in the accuracy of the biblical text.

And for that matter, most people reading all the articles about the Philistine dna study believe in biblical accuracy as well.

And so, when Crete turns up as the location of the closest relatives of the Philistines, why doesn’t anyone shout it from the rooftops! I wrote, “Ding! Ding! Ding!” next to the words “Crete_Odigitria_BA” when I read through the study.

I’m likely oversimplifying the study and its results. But it seems odd that people would painstakingly excavate millennia-old bodies from the earth in Ashkelon, spend years in the lab analyzing their dna in comparison with the dna of countless others from the region, and then, when the facts come out, not relay to the public everything those bones have to say.

At the same time, more evidence has been uncovered that upholds the veracity of the Bible. On Friday, archaeologists excavating at Khirbet a-Ra’i announced they had discovered biblical Ziklag. From its location to the Davidic period remains to the likely destruction at the hands of the Amalekites, the archaeological remains seem to match the biblical account nicely. Thankfully, there are some archaeologists who don’t shy away from accepting when the facts on the ground match the text.

To make sure you don’t miss any archaeological discovery that aligns with the Bible, check in regularly with our sister website and be sure to look out for our new Watch Jerusalem print magazine.