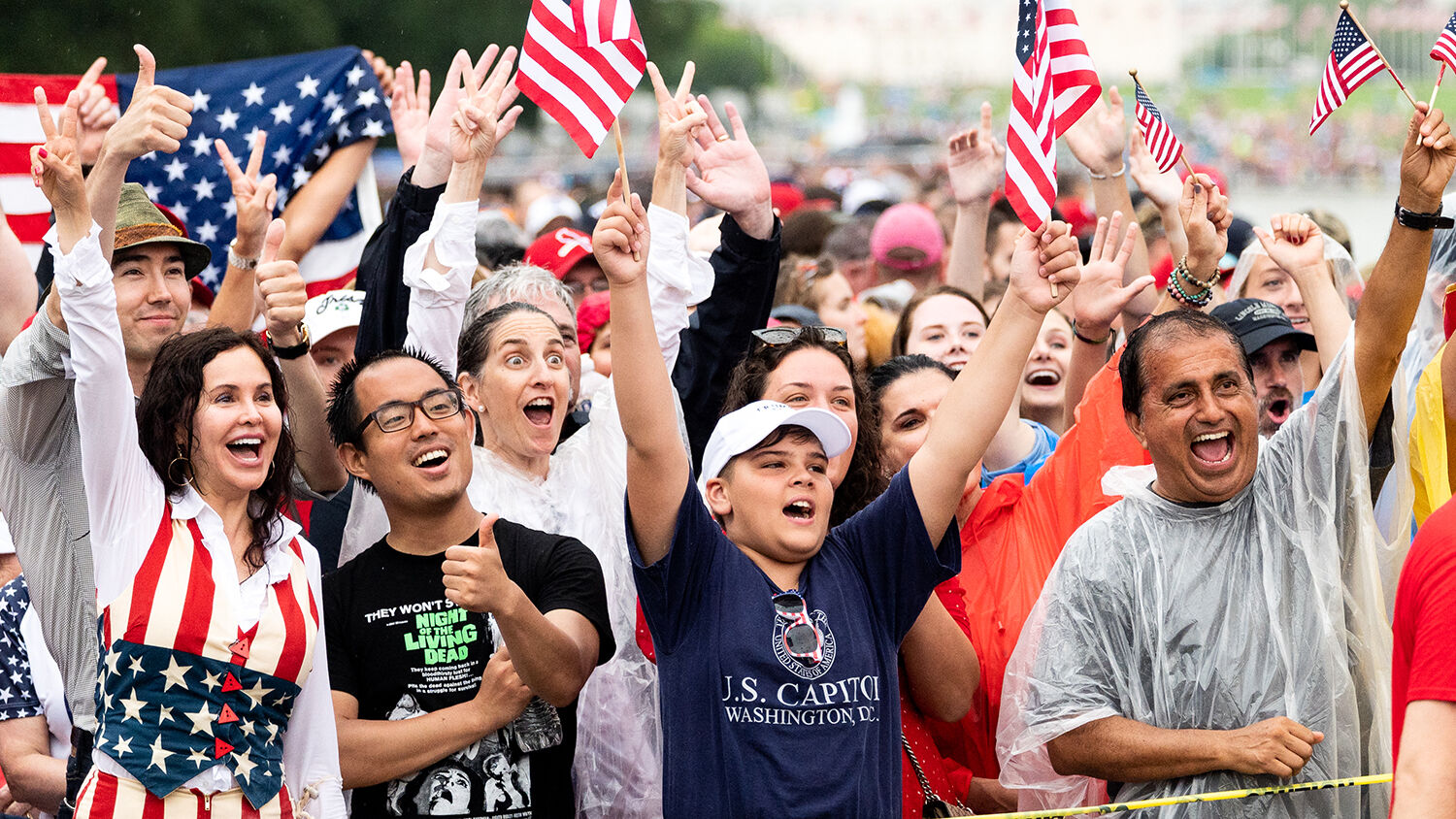 A crowd waits for President Donald Trump to speak at the National Mall in Washington, D.C., on Independence Day.
Getty Images

Just days before Americans celebrated the Fourth of July, Gallup released new data showing that fewer Americans than ever are extremely proud of their country.

A poll of all 50 states revealed that fewer than half of American adults are “extremely proud” to be American—marking an 18-year low—and 3 percent are not proud at all.

Supporters of the Democratic Party tended to be the least proud of the United States. Only 22 percent of Democratic supporters said they were very proud to be American.

Most Americans say the American Political system does not make them proud of their country. #IndependenceDay2019 #gallupnews pic.twitter.com/GVgEt81KJV

To many, these results are unsurprising. “Record-low American patriotism is the latest casualty of the sharply polarized political climate in the U.S. today,” reported Gallup. “Since the start of George W. Bush’s second presidential term in 2005, fewer than 60 percent of Americans have expressed extreme pride in being American.”

The data points to some serious problems with how an increasing segment of Americans view their country. A number of recent events exemplify this.

Thomas Jefferson drafted the Declaration of Independence and called slavery an “abominable crime,” yet he was a lifelong slaveholder. His statue stands in our Slavery & Freedom exhibition with the names of the 600 men, women and children he enslaved at Monticello. #ANationsStory pic.twitter.com/fNIpuaSKe7

Also on July 1, the Wall Street Journal reported that Nike had decided to cancel its special edition Air Max 1 Quick Strike sneaker. The shoe sported a Fourth of July theme with the 1770s-era Betsy Ross version of the American flag, with 13 stars to represent the original 13 colonies.

The reason for the cancellation? Former nfl quarterback Colin Kaepernick contacted Nike after pictures of the shoe began to circulate online and complained that he found the flag offensive because of its alleged connection to the era of slavery.

“Nike has chosen not to release the Air Max 1 Quick Strike Fourth of July as it featured an old version of the American flag,” said Mark Rhodes, a spokesman for the company, in an email Monday. https://t.co/NiDH9P0spJ pic.twitter.com/imhmsM4Tdb

Nike listened to Kaepernick and pulled the product from shelves just before it was scheduled to go on sale.

There is something very concerning about this decline in American patriotism. It is one of the most important domestic trends in recent years.

In the introduction to his booklet Great Again, Trumpet editor in chief Gerald Flurry writes:

Do you believe the United States of America has been mainly a positive force in the world for most of its history?

Do you have a favorable view of the Founding Fathers, the Constitution, separation of powers, rule of law, Manifest Destiny, freedom of religion, freedom of speech, free-market economy and America’s role in World Wars i and ii?

If you do, then surely you are deeply alarmed by the state of America today.

All of these pillars of American history and identity are being vilified and destroyed. America’s educators are teaching oncoming generations to be embarrassed by them. Even the nation’s leaders see them as shameful. On many foundational issues, they share the views of America’s worst enemies!

The decline in patriotism is a result of a deliberate assault, which the mainstream media cannot see. America has combatted tyranny and autocracy in this world, but now it is being undermined from within.

“There is a spiritual dimension to America’s decline that most people do not see,” writes Mr. Flurry. That dimension is critical to truly understand why patriotism in America is declining.