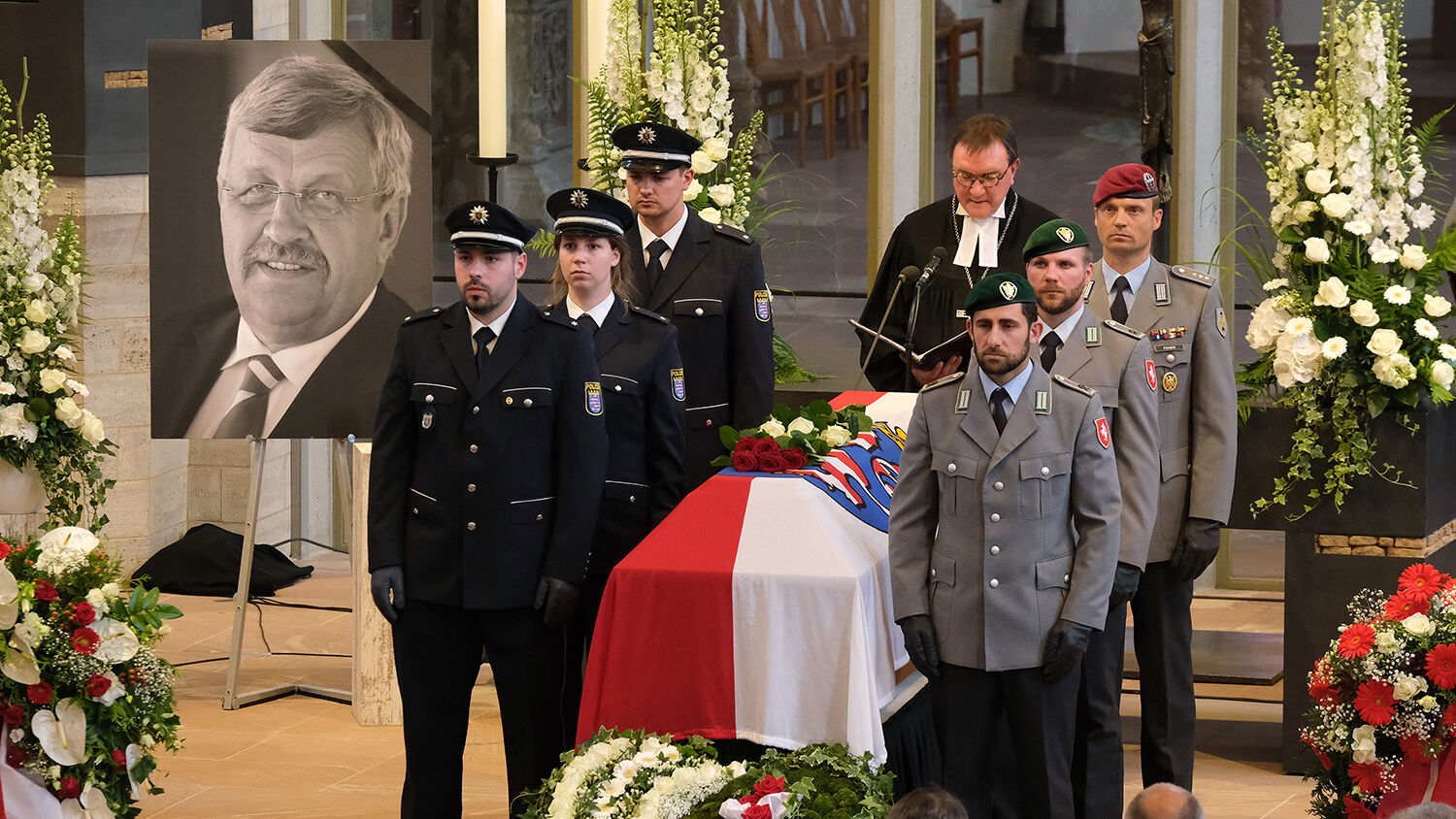 An honor guard stands at the coffin of murdered German politician Walter Lübcke at his memorial service at St. Martin church on June 13 in Kassel, Germany.
Sean Gallup/Getty Images

The murder of Walter Lübcke is a warning sign that Germany’s right-wing extremist problem is about to explode.

Pro-migrant politician Walter Lübcke was shot and killed in his garden on June 2. The murderer is considered a right-wing extremist. This assassination marks another low point in Germany’s refugee crisis and has triggered weeks of debate.

Lübcke served in the German state of Hesse as the administrative chief of Chancellor Angela Merkel’s Christian Democratic Union for the Kassel area. Throughout the refugee crisis, he publicly supported Merkel’s decision to let hundreds of thousands of migrants into the country. His support for Merkel’s policy aroused the anger of various citizens in his district. A network of citizens who violently opposed the politician formed online. Encouraged by the network, Stephen E. illegally obtained guns and shot Lübcke.

“We now need a quick and efficient investigation to also protect the many local politicians who are threatened,” Greens interior politician Irene Mihalic demanded (Trumpet translation throughout).

“The danger is not only the right-wing extremist perpetrator who had the finger on the trigger,” German President Frank-Walter Steinmeier warned, “the danger is rather a climate or networks in which people feel legitimated or even encouraged to do such acts.”

“The comprehensive investigation of the crime now has top priority,” he added. “We must never again underestimate the danger of terrorism from the right, no matter who it affects!” Steinmeier concluded that if the democratic representatives are threatened, “then our democracy is in danger.”

Right-wing extremism includes anti-Semitic, anti-Islamic and xenophobic views. Interior Minister Horst Seehofer pointed out that there are about 25,000 right-wing extremists in Germany, about half of which are “definitely ready to use violence.” These numbers are concerning. He warned that monitoring 12,000 people to avoid any possible crime “is hardly possible.”

Seehofer’s words are not reassuring. He promises more security measures but admits that he can’t guarantee Germans’ safety. Thousands are protesting against right-wing extremism, yet right-wing networks are growing.

Seehofer believes that Germans need “to show moral courage, stand up, and distance themselves clearly and unmistakably from hatred, anti-Semitism, xenophobia.”

But the extremist minority intimidates the neutral majority. Worse, these extremist acts are the most visible and violent symptoms of a much more widespread anger directed at mainstream politicians and politics.

The hatred in Germany’s right-wing networks is spreading through social media chatrooms. Right-wing extremist networks are making connections with sympathetic police officers, soldiers and weapons dealers. Fear among politicians and opponents is spreading, yet no one is providing solutions. Germany’s weak government is watching democracy itself erode.

But they won’t watch long. The Bible prophesies that Germany’s extremism will again surface (Revelation 17:8) and directly lead to the rise of another German dictator (verse 10). (To learn more about these specific prophecies and how they are coming about, request a free copy of Germany and the Holy Roman Empire.)

“Every reader should closely watch what is happening in Germany,” Trumpet editor in chief Gerald Flurry wrote in 2016 concerning the refugee crisis. “That nation is going through some dramatic changes that are about to reshape the country and the whole of Europe. Yet most of the world is asleep to how serious these changes are.”

Bible prophecy clearly shows that the rise of extremism in Germany is leading to the subsequent rise of a strong German leader.

Notice what is written in Daniel 8: “And in the latter time of their kingdom, when the transgressors are come to the full, a king of fierce countenance, and understanding dark sentences, shall stand up. And his power shall be mighty, but not by his own power: and he shall destroy wonderfully, and shall prosper, and practise, and shall destroy the mighty and the holy people” (verses 23-24).

This coming leader will promise peace. He will promise to solve Germany’s refugee crisis in the Middle East. Germany and Europe will allow him to seize enormous power. And in the end, he will lead Germany to destroy many nations.

German extremists have now proved willing to kill their own politicians. Germany’s prophesied strongman will channel that hatred for his own evil purposes. We haven’t seen the worst from Germany yet. But the Bible also shows that the worst will be followed by the best event possible: Jesus Christ’s return. Read “Watch Germany!” by Gerald Flurry to learn how the refugee crisis shows Germany’s dark future and how it directly points to God’s soon-coming intervention.