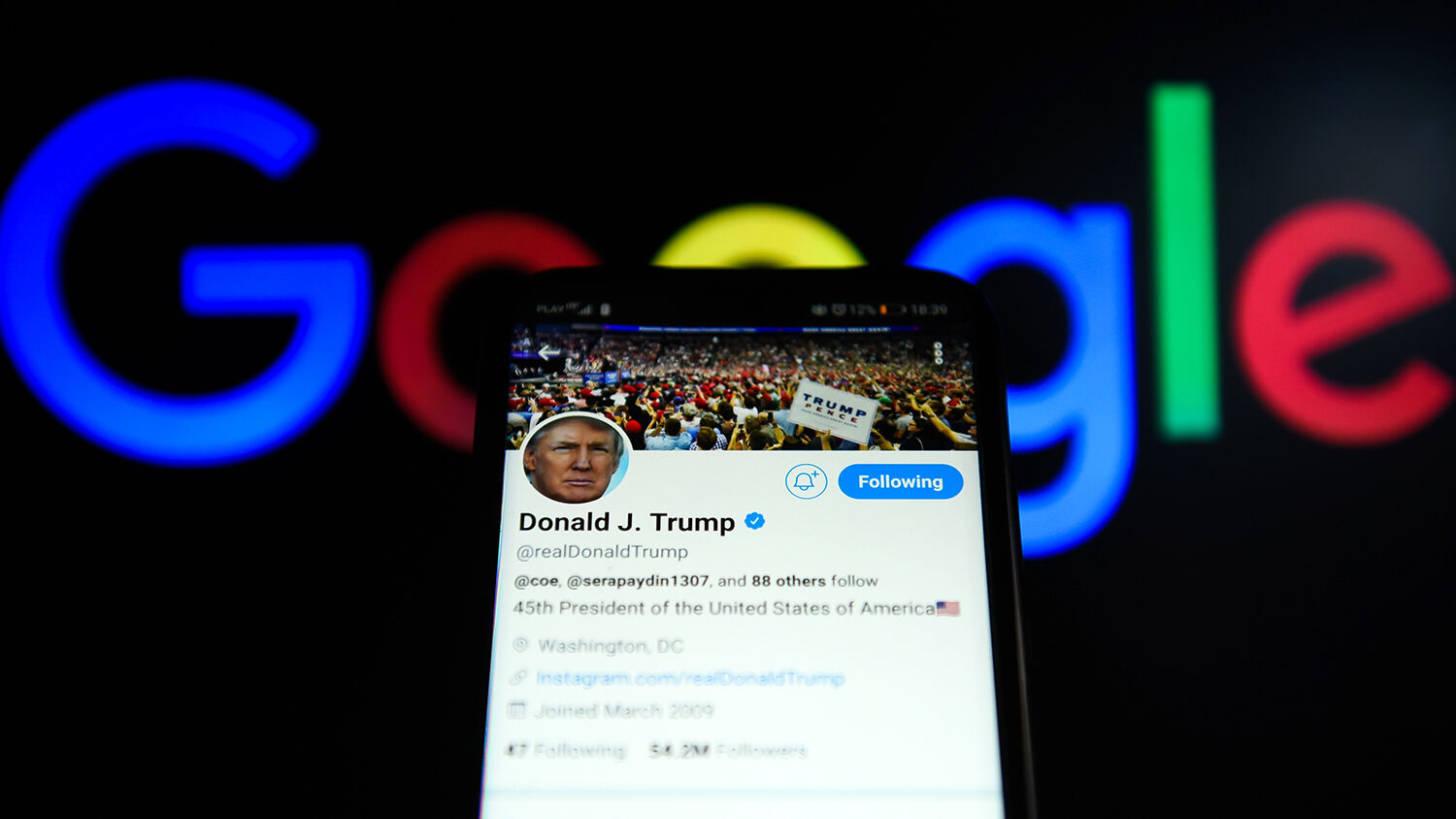 In this photo illustration, the President of the United States, Donald Trump’s twitter account is seen displayed on an Android mobile phone in front of a computer screen with the Google sign.
Getty Images

Tech giants are censoring what you watch and read, and the consequences extend far beyond the 2020 election.

For three years, United States President Donald Trump has been warning that Google is colluding with the Democratic Party to suppress positive news about his administration. Project Veritas has now released secretly recorded video footage of a senior Google executive admitting that Google is biasing its search algorithms in order to control the information available to Americans. The goal is to prevent Mr. Trump from winning reelection.

Project Veritas is an investigative organization founded by James O’Keefe. It publishes secretly recorded videos that have exposed executives and other authorities at abortion companies, technology firms, media outlets, election commissions and other places speaking frankly about their liberal biases and how they have acted on those biases. The Project Veritas website says it was founded to “investigate and expose corruption, dishonesty, self-dealing, waste, fraud and other misconduct in both public and private institutions in order to achieve a more ethical and transparent society.”

In late May, Project Veritas investigators secretly recorded a conversation with Jen Gennai. Gennai is the head of responsible innovation, a department Google recently established to manage artificial intelligence “fairness” and “ethics.” She previously worked in its “Trust and Safety” department. She stated outright that Google is using its power to try to keep people like President Trump out of office.

“Elizabeth Warren is saying we should break up Google,” Gennai said. “… I love her, but she’s very misguided. [T]hat will not make it better, it will make it worse. Because all these smaller companies who don’t have the same resources that we do will be charged with preventing the next Trump situation. [A] small company cannot do that ….” She said that the election of President Trump in 2016 was a disaster for Google, the media and the American people. “So now … we’ve been [asking], what happened there, and how do we prevent it from happening again?”

After Project Veritas published evidence of Google’s bias against conservatives, Gennai posted an article on Medium emphatically stating that Google “has no notion of political ideology in its rankings.” Google, which owns YouTube, took the Project Veritas video accusing Google of censorship—and censored it.

But more information keeps coming to light. On June 25, Project Veritas published a leaked e-mail thread on “transparency and ethics” in which a Google employee machine-learning recruiter says conservative commentators Jordan Peterson, Ben Shapiro and Dennis Prager “are Nazis.” This employee recommended removing content produced by these three individuals from Google’s “suggestion feature,” so that fewer users will see what they post.

Google got a lesson on free speech today. Have a watch.

There is an abundance of evidence that YouTube has already taken similar steps.

According to a 56-page report published by the Heartland Institute, YouTube has shut down entire conservative video channels for ideological reasons. YouTube censors shut down the channels of Legal Insurrection and Pamela Geller after they posted videos supporting Israel. They also placed more than 100 videos from Prager University, Dennis Prager’s nonprofit organization, on “restricted mode.” This mode was meant to censor inappropriate sexual content from children, but it is being used to prevent people from seeing educational videos with titles like “If You Live in Freedom, Thank the British Empire,” “Why Isn’t Communism as Hated as Nazism?”, “Radical Islam: the Most Dangerous Ideology,” “Make Men Masculine Again” and “The Ten Commandments: What You Should Know.”

Google is the most popular search engine in the world. More than 90 percent of all online searches worldwide are conducted through Google or its YouTube subsidiary. And biased Google engineers are censoring information based on the company leadership’s political views.

Former U.S. President Barack Obama was known as “Silicon Valley’s president.” Big Tech companies like Amazon, Apple, Facebook, Google and Microsoft had close relationships with his administration. Data from the Campaign on Accountability shows that Google representatives attended White House meetings more than once a week during Obama’s presidency. During his eight years in office, almost 250 people left his administration to work for Google or vice versa. It was Obama’s Federal Trade Commission that ruled that Google was not an Internet monopoly that should be split into smaller companies.

It appears that former Obama administration officials now in Silicon Valley are continuing their fight against President Trump and American conservatives by censoring conservative content from the world’s most powerful media!

This type of nefarious activity is dangerous.

The Bible prophesies about an evil king who casts the truth to the ground. “Yea, he magnified himself even to the prince of the host, and by him the daily sacrifice was taken away, and the place of his sanctuary was cast down. And an host was given him against the daily sacrifice by reason of transgression, and it cast down the truth to the ground; and it practised, and prospered” (Daniel 8:11-12).

In ancient times, Seleucid Emperor Antiochus Epiphanes fulfilled this prophecy when he desecrated the temple in Jerusalem with an idol bearing his likeness. But the book of Daniel is primarily for this end time (Daniel 12:4). So this prophecy about Antiochus has a dual fulfillment, and is prophecy for today.

“The obvious question arises, why would God allow such a terrible thing to happen?” Mr. Flurry writes. “The answer is back in Daniel 8:12. [N]otice: It says it was ‘by reason of transgression.’ The sins of the people gave Satan his opening. Their prayers to God are not being answered. That is why Antiochus can do all of his dirty work: because there’s so much sin going on inside Israel. That was woefully true of spiritual Israel, God’s Church, and it is equally true of our nations today. Our people are saturated in sin and lawbreaking of every imaginable type—and proud of it! That’s why God punishes us with such a devastating curse!”

A political Antiochus in America cast the truth to the ground for eight years. He is out of office now, but his supporters are at work in Silicon Valley. They are attempting to prevent President Trump from winning reelection by controlling what information Americans can watch and read. The dangers posed by such censorship go beyond an attempt to undermine a certain president or party.

Now that you know they exist, you might want to check out some of these censored videos, or look for “The Ten Commandments: What You Should Know” on YouTube’s restricted mode. But you definitely need to read Mr. Flurry’s booklet America Under Attack. It explains the vital unseen reason why these troubles in American society are threatening to rip it apart.