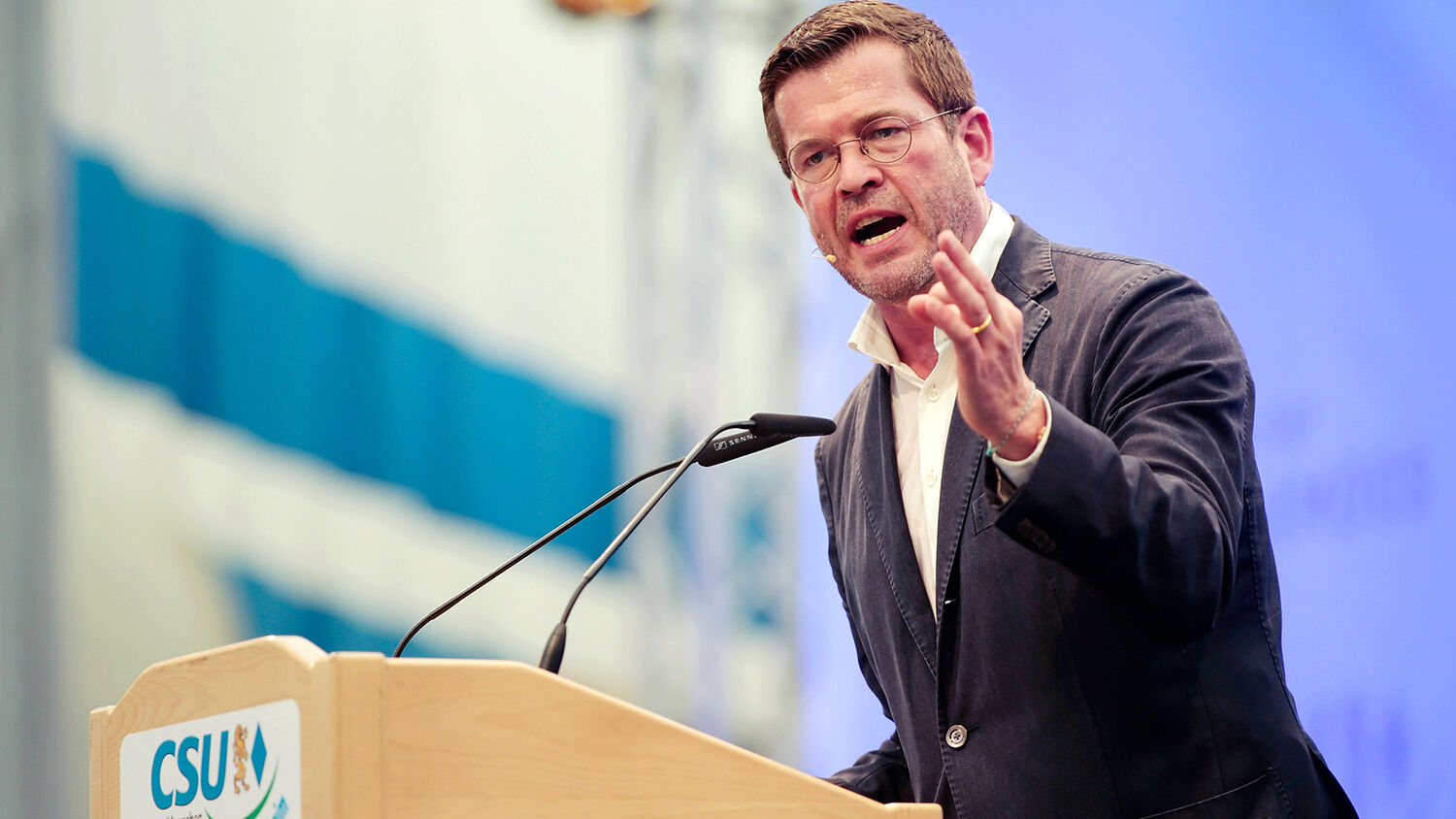 The moment he is waiting for could come this year.

Who will succeed German Chancellor Angela Merkel? There is hardly a more momentous question in European politics today. But not a single politician, analyst or commentator has a definite answer. No candidate seems qualified; no rival strong enough and no alternatives in sight. As Merkel’s end nears, the desperation for a successor nears unbearable levels. One man has been waiting to take advantage of this situation.

“Angela Merkel is not at her end yet,” Germany’s Focus magazine commented in October 2018. “But possible successors are already warming up. The preliminary decision may come soon. There are several candidates—and one joker.”

Following a plagiarism scandal, Guttenberg resigned from all political offices in 2011 and moved to the United States. Recently, he has been in Germany more frequently and has reportedly bought an estate in northern Germany. Over these years of political absence, Guttenberg has stayed in contact with former colleagues and deepened his relations in business and government. Some of these contacts spoke anonymously with Focus in 2018 and said that Guttenberg is planning a comeback.

Guttenberg has not said publicly that he wants to come back—quite the opposite. But this could be part of a well-calculated plan. Most crucial in his plan is the timing. The perfect moment for his return may come this year.

Guttenberg “is currently watching closely what is happening in the union parties–and is flirting with a comeback,” Focus wrote. He observed for months “how Merkel and csu [Christian Social Union] leader Horst Seehofer lost authority–and how discontent has grown between the union parties.” It wrote:

Out of the conversations [with his contacts] it emerged that Guttenberg considers a comeback—in a situation in which Horst Seehofer and Angela Merkel no longer enjoy the confidence of their party members and no successor is accepted by a large part of the party. Guttenberg could then initially become csu chief and then chancellor candidate of the union, that’s one consideration.

Guttenberg is member of the csu, which cooperates on the national level with Merkel’s Christian Democratic Union (cdu). Prior to every national election, the two parties agree on one chancellor candidate to represent them both. For the last four elections, the cdu and csu supported Merkel as their candidate. But a leadership crisis in both the csu and cdu could be an appealing time for Guttenberg to make a comeback.

This may explain why Guttenberg responded so furiously after the csu unanimously appointed Markus Söder as Seehofer’s successor as csu leader. After his appointment in January, Guttenberg criticized both Söder’s qualifications and character in two interviews.

Guttenberg told Austrian newspaper Kleine Zeitung that Söder “so far doesn’t reach the level of the big party leaders of the csu.” He told Frankfurter Allgemeine Zeitung that Söder lacks “the gift for empathy” and questioned his ability to lead intellectual discussions. In general, Guttenberg doubts that Söder can “make the shift from a skilled but brute power politician to a humble team player.”

“Above all, the new party leader has to be much more present in Berlin, where the decisions are made. That too is a new challenge for Markus Söder,” Guttenberg told Frankfurter Allgemeine Zeitung.

Söder is not seen as a chancellor candidate the cdu and csu would support. But there isn’t an obvious candidate from the cdu either. Merkel’s favorite, Annegret Kramp-Karrenbauer, is declining in popularity. Her rivals, Friedrich Merz and Armin Laschet, are lurking in the wings but neither one captivates the party or people. An internal power struggle between the three has already begun, and Guttenberg is watching it closely.

Prominent politicians from the cdu-csu have openly speculated that their current governmental coalition could break before the end of 2019. This would force Merkel to leave the chancellery prior to the 2021 elections. Some speculate that Former Finance Minister Wolfgang Schäuble could lead a transitional government. But due to his age, he would be only a temporary solution.

The cdu needs to find a successor before the coalition breaks, otherwise the party will be leaderless and could fall into chaos. In recent years, Germany’s mainstream parties have increasingly lost support to the growing smaller parties. Unless the cdu finds a solution to its leadership crisis soon, it runs the risk of losing its ruling status.

In one of Germany’s neighboring countries, something similar happened, but the chaos was prevented by one man: Sebastian Kurz.

Focus has claimed that Guttenberg’s comeback plans are, in part, inspired by Kurz. “Guttenberg observed the rise of Sebastian Kurz very closely, [his contacts] say. He had analyzed exactly how Kurz transformed his party from the övp [Austrian People’s Party] into the Liste Kurz and thus became the chancellor of Austria,” it wrote.

The övp was declining in votes, which led to an internal power struggle. Following the resignation of the övp’s leader in 2017, Kurz knew exactly what to do. He presented the party with two options: Grant him unprecedented power as party leader or decline his leadership—and decline into insignificance. After gaining the party’s support, Kurz dissolved the existing coalition and led his party to election success.

A survey published by Focus in May 2018 showed that 38 percent of Germans would vote for Sebastian Kurz. Only 33 percent at the time said they would vote for the cdu-csu, even though Kurz hails from the same side of the political spectrum.

Germans are yearning for a leader like Kurz. Robin Alexander, deputy editor in chief of Germany’s Die Welt, explained on May 21 why Kurz is also a “German story”:

It is the story of a yearning, the longing for an alternative to a political discourse that is increasingly perceived as unrealistic, to a grand coalition that is seen as increasingly outdated, and above all to Angela Merkel. The Austrian, who is exactly half the age of his German colleague, has inflamed the fantasies of all those who think—or vaguely feel—for over three years that the eternal chancellor is in the way of something new that is overdue.

Guttenberg sees Germans groaning for a leader like Kurz. Perhaps he believes he can satisfy that desire.

The Trumpet and its predecessor, the Plain Truth, have proclaimed for decades that a strongman will soon rise in Germany. Referring to the end time, just prior to the return of Jesus Christ, the Bible reveals that a German strongman will rise to take “the kingdom by flatteries” (Daniel 11:21). This man will not be voted in but rather take advantage of Germany’s desperation. Trumpet editor in chief Gerald Flurry wrote in “Germany—A New King Is Imminent”:

Mr. Flurry then indicated that this dramatic turn of events could happen this year.

Revelation 17 also prophesies that in this end time 10 kings, with one supreme leader, will rise in Europe. These leaders are of one mind and come to power at approximately the same time. The Bible also reveals that these 10 kings will rule as dictators (Revelation 13). Kurz’s powerful political moves give a strong indication that Austria is already on its path to such a dictatorship. Germany’s current political crisis opens the door for a dictator to rise.

This German strongman will follow in the footsteps of Adolf Hitler and the emperors of the Holy Roman Empire. “And there are seven kings: five are fallen, and one is, and the other is not yet come; and when he cometh, he must continue a short space” (Revelation 17:10).

“One is” refers to Adolf Hitler. During this period, God raised up one man to deliver these prophecies and God’s message of hope to the world. This man’s name was Herbert W. Armstrong, editor in chief of the Plain Truth. Mr. Armstrong prophesied that the rise of this last king will lead to Jesus Christ’s return, when He will put an end to mankind’s rebellion. You can learn more about Mr. Armstrong’s Bible-based prophecies in our free booklet He Was Right.

While we don’t know exactly how this man will come to power, the Bible’s prophecies about his rise are sure. Read “Germany—A New King Is Imminent,” by Gerald Flurry, to learn why Germany’s new leader will drastically change world events and, in a direct way, lead to the return of Jesus Christ.