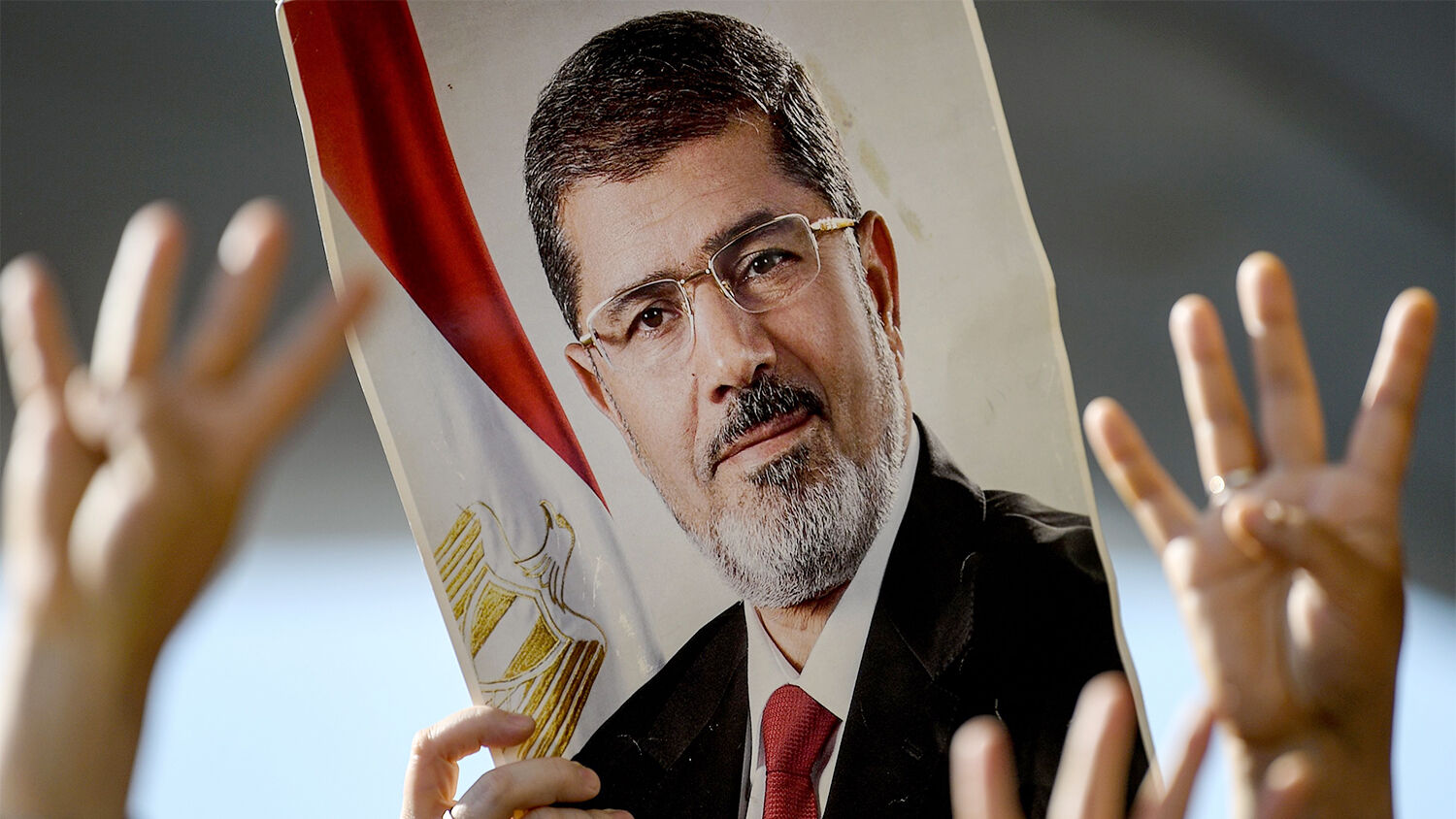 People flash the Rabia sign (a four-fingered hand sign by pro-Morsi supporters ) next to a poster of former Egyptian President Mohamed Morsi as they attend a symbolic funeral ceremony on June 18 at Fatih mosque in Istanbul.
-/AFP/Getty Images

Has the radical Egyptian dream died with the dictator?

Screams erupted from an Egyptian courthouse last Monday as former President Mohamed Morsi collapsed, dead. The alleged heart attack brought Morsi’s six years of imprisonment to a climactic close. An ignoble end for the man who, through the course of a single year, savaged the Egyptian economy, radicalized the nation, and crowned himself pharaoh in all but name.

The death of Egypt’s first “democratically” elected president has flung the Arab Spring back onto the world stage. It was in the wake of the 2011 uprising that Morsi and the Muslim Brotherhood surged to power. Now the figurehead of the movement is gone—hastily buried in a Cairo grave. Is his dream of a radical Islamic Egypt buried with him?

One source proclaims an emphatic, “No!”

That source is the Bible.

Morsi hasn’t lived to see it, but the repercussions of his disastrous time in office have left Egypt in a prime position to go radical again.

Intellectuals scoff at the use of the Bible as a means to understand geopolitics. But God has a lot to say about the rise and fall of nations—particularly in the end time. Egypt is no exception.

Egypt is directly mentioned 611 times in the King James Bible. Many references relate to the nation’s interaction with the patriarchs and ancient Israelites of the Old Testament. But some refer to the Egypt of today.

God has a lot to say about modern Egypt. Look at Daniel 11:40. It speaks of a king of the south—a conglomeration of radical Islamic nations led by Iran. (Our free booklet The King of the South explains this in detail.) But notice verse 43 in particular. It shows Egypt and Libya will be part of the alliance. This alliance has never existed before. God says it will come about. That makes it news in advance, aka prophecy.

It makes sense that God would mention Egypt’s role in the end time. It has a large population and one of the strongest militaries in the Arab world. It controls the Suez Canal, a waterway that facilitates 18,000 ships per year, almost 10 percent of all international trade. Egypt also shares a border with Israel: The distance from Cairo to Jerusalem is only 263 miles.

These pivotal factors help explain why Egypt is so important to Iran. Daniel 11 indicates “the king of the south” will move aggressively, pushing at other world powers—particularly Europe. Control of the Suez would be a gargantuan push by radical Islam. Iran has already made considerable inroads into the region in what Trumpet editor in chief Gerald Flurry has described as “a deliberate and calculated Iranian strategy to conquer the Red Sea.”

The Prophet Daniel said the king of the south would ignite a war that triggers what God calls the Great Tribulation. The Arab Spring and Morsi’s rise thrust Egypt toward this radical alliance.

That push toward radicalism went into overdrive with the protests in 2011. Naive Western sympathizers saw a chance to install democracy in a series of rioting Arabic nations. Egypt—perhaps the most stable and pro-Western candidate—was a prime target for then United States President Barack Obama.

Abandoning America’s long-time ally Hosni Mubarak, the Obama administration started ratcheting up the pressure. It worked. The White House cheered on as the ousted Mubarak stepped down and elections were called. Not satisfied with his work, Obama also made sure that the radical Muslim Brotherhood—the only real organized political faction—was on the ballot box.

With that, the U.S.-endorsed Arab Spring dragged Egypt into despotic chaos and radicalism.

The Muslim Brotherhood won. The vote might have been considered democratic, but the Brotherhood was not. Early indications of Egypt’s trajectory came when opponents to the new government were stripped naked and crucified on trees outside the presidential palace.

Morsi gave himself unprecedented power over the new constitution, prompting Mr. Flurry to write, “If you thought Mubarak was evil, wait till you see Morsi in action.”

While all this was happening, Egypt’s economy collapsed. Tourism became nonexistent. There was a 60 percent drop in foreign exchange reserves. The Egyptian pound devalued. This led to skyrocketing food prices, mass unemployment and fuel shortages. The effects are still being felt by the poverty-stricken masses today.

Meanwhile, the U.S. blocked its ears to Morsi’s anti-Semitic rhetoric and chose to ignore the unfolding nightmare. Thankfully, the Egyptian military did not. Abdel Fattah al-Sisi capitalized on the national discontent and pulled off a popular military coup. Egyptians cheered and the world breathed a brief sigh of relief.

Morsi was behind bars. The Brotherhood was labeled a terrorist organization and run out of Egypt.

While the full effects of Daniel 11:40 were not realized, the groundwork was laid. And it remains in place to this day.

The damage has been done. What was once a stable U.S. ally is today a fractured and frail basket case. Consider the aftereffects of Morsi’s year in office.

The economy is still in pieces. Economic reform has started to bolster gross domestic product growth, but national debt remains high. So too does unemployment, sitting around 8.1 percent. Some 26 percent of the nation lives below the poverty line.

Unemployment, poverty and empty bellies do nothing to ingratiate the population to Sisi or his government. And they aren’t the only unhappy ones.

Despite heavy crackdowns, Sisi has been unable to completely quell radicals and domestic terrorists. The Sinai Peninsula is a hotbed of insurrection. The insurgency is an embarrassing ongoing conflict for the government, showing the military’s limited reach beyond the banks of the Nile.

Though Mubarak was a dictator, his no-nonsense government kept enemies of the state in check. Now bombings and attacks on peripheral outposts are commonplace. Islamic State affiliates are on the loose—a far cry from the relative stability under Mubarak. Porous borders to the West also endanger national stability. Libya has become a fractured and radicalized state—with multiple factions vying for power. This has led to the rise of more Islamist groups on the doorstep.

To bring Egypt back to pre-Morsi prestige, Sisi has implemented harsh crackdowns on dissent, a move berated by many in the West.

Notice what the Wall Street Journal stated last week: “Mr. Morsi’s election, a year after the 2011 revolution that ousted President Hosni Mubarak, began a brief era of political freedom that lasted until the military takeover in 2013.” How quickly we forget. Today the liberal left is eager for another Arab Spring in Egypt. They hate Sisi—a convenient excuse for those who backed the failed policies of the Obama administration.

Left-wing pundits have learned little from the Arab Spring. Few, if any, recognize the disastrous results of removing strongmen from power and attempting to establish democracy in the Middle East. People are quick to condemn Sisi, but consider what would have happened had the military not intervened. Egypt was turning into a radical Iranian ally!

And it will happen again. Egypt is frail at a time when regional powers are on the rise. Sisi faces opposition from poverty-stricken citizens, radical factions, persecuted minorities, neighboring countries, and left-wing foreign media.

Regimes rise and fall, but Bible prophecy will always come to pass without fail. Again, be sure to read our free booklet The King of the South. God has forecast the radicalization of Egypt. You need to prove that statement and act upon that knowledge. God promises protection from the coming world upheaval for those who respond today.