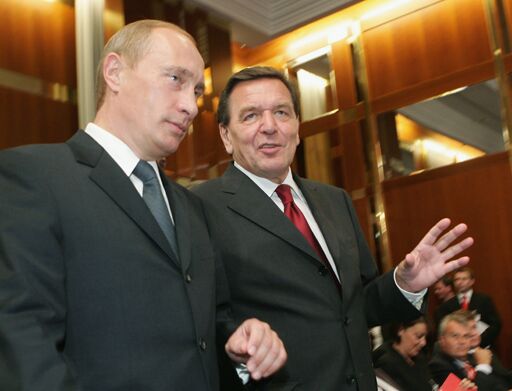 Russia and Germany are caught up in a high-stakes game of energy politics. The fallout will shape the order of European international relations for the foreseeable future.

Halfway through her first 100 days in office, Germany’s Chancellor Angela Merkel has been thrust into stormy waters that are proving both a test and a serious challenge to her government’s tenuous hold on foreign policy. At stake is a trade-off between territory and energy in Europe.

During the previous chancellorship of Gerhard Schröder, Germany appeared to enjoy warm and close relations with Russian President Vladimir Putin. It was a convenient politico-economic relationship: Russia got German investment to kickstart its ailing economy, and in return Germany received preferred access to Russia’s massive energy resources.

However, the Russian president’s clever and deliberate ploy to use energy colossus Gazprom as a lead arrow in his pouch of foreign-policy quirks has the German public suddenly realizing that they appear to have placed too many eggs in the Russian energy basket.

Germany presently relies on Russia to supply a whole third of its oil and gas supplies.

On the surface, such a level of dependence poses a significant geopolitical conundrum for Germany and a nice bargaining tool for Russia. But nothing is always as simple as it may first appear.

Earlier this month, in the dead of winter, Germans watched as their gas supplies fell markedly. When they suddenly realized that Russia had screwed down the tap, the media, certain politicians and the public within Russia’s major economic partner-client cried foul. What happened is that, using an apparent spat with the Ukraine over gas prices as the excuse, Russia deliberately cut gas supplies to Ukraine, full well knowing that by doing so the pressure would drop all the way across the chilled landscape of Central Europe to its main customer, Germany.

How could this be? How could the deliberate, detail-conscious Germans have overlooked the prospect of being held to ransom by allowing themselves to become so heavily dependent on a single foreign monopoly for the provision of a large portion of their energy? Even more so, how could German foreign-policy gurus have allowed such a state of affairs to occur, given the history of Russo-German relations?

Added to this, the lumbering Russian bear, known for its long-term perspective on things, would hardly have ignored the prospect of a sharp reaction from Germany, its strongest foreign-policy ally, by permitting such a thing to happen. Russian President Putin is too shrewd of a political strategist to have not thought this thing through. Something does not quite gel in this whole scenario.

There is no doubt that Vladimir Putin’s hiring of ex-chancellor Schröder into a chief position as project chairman of the Baltic Sea gas pipeline is one vital key to understanding the Russo-German component of this equation. The die was cast last September in an agreement between Russia and Germany to link the two countries by routing a strategic pipeline direct from the Russian town of Babayevo to the coast at Vyborg, thence under the Baltic Sea to the town of Greifswald in northeastern Germany. This pipeline will bypass not only the Baltic countries, but, crucially, Ukraine and Poland, delivering gas to Western Europe through the gateway of Germany.

Thus, regardless of the current shenanigans involving Russia’s demonstrated power to turn off the gas to Ukraine, it will no longer need Ukraine’s cooperation in distributing gas unhindered to the European Union, its largest customer. By 2010 it will be able to hold Ukraine to ransom by turning off the tap, with no effect on the rest of Europe, which will receive gas routed through Germany instead.

But, as Hamlet said, there’s the rub.

As long as Germany and Russia remain friends, Germany will have the power to control the gas flow from Russia to EU nations. The EU draws a quarter of its energy needs from Russian sources. This is a powerful strategic tool for Germany to possess in bargaining with other EU nations. Just as the Germans have ensured that they control the gates on the much-used canal and river routes from East to West Europe, they will hold the whip hand when it comes to controlling the supply of gas as well.

In all of this, Ukraine will be left out in the cold by both Germany and Russia, for Ukraine is the bargaining chip within the whole scenario. The deal is simply this. Behind the scenes, Germany has quietly agreed to trade off Ukraine’s efforts to join the EU for access to Russian energy. In exchange for Germany’s energy deals, Russia gets its great breadbasket of the great Ukraine plain, and a buffer zone to boot between an eastward spreading EU and a historically unpredictable ally, Germany. The EU, on the other hand, courtesy of Germany by 2010, gets access to Russian gas.

By 2010, when the Baltic Sea pipeline is completed under the guiding hand of Chairman Schröder, Germany will strategically control the flow of gas to the principal EU powers in the Western segment of the EU. As Russia demonstrated last week, that’s a weapon that can make or break a government’s will, or bend it to the power of the controller.