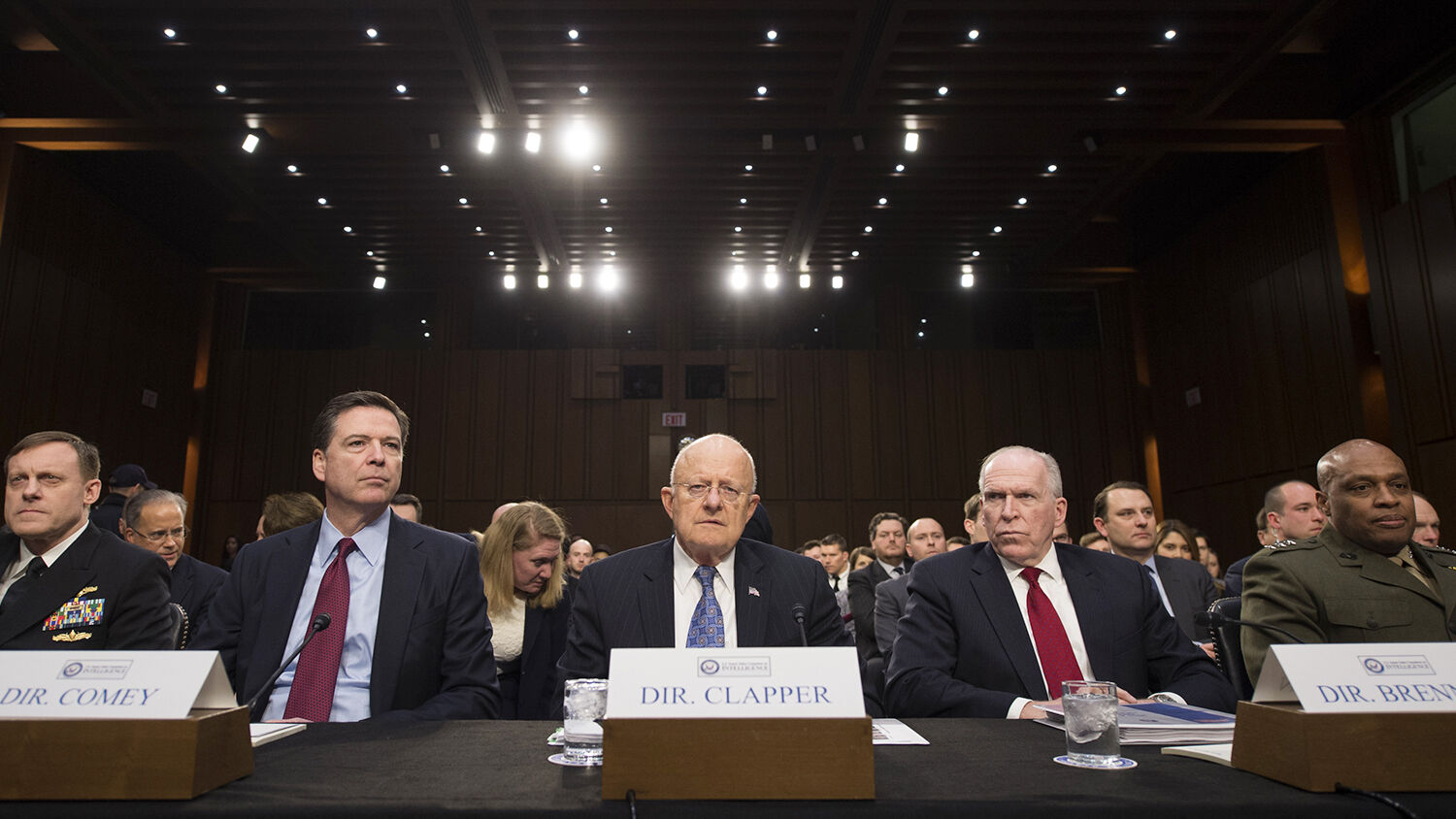 Expelled from government office, Obama administration officials are taking over the mainstream media.

Barack Obama has changed his retirement plans. When the former president thought his successor would be fellow Democrat Hillary Clinton, he joked about playing dominoes with retired talk-show host David Letterman. In 2015, he told a crowd of students that he planned to eventually return to the work of advancing his agenda in local communities. But after Donald Trump’s upset victory, Obama has chosen a different profession: the movies.

The former president is not the only one from his administration who is now in media. A surprising number of high-level officials, including top spies, now work for technology, media and news firms. Yet looking back, this shouldn’t be surprising. During Obama’s eight years in office, his administration’s intelligence community became entwined with the national media to an extent that should shock anyone who believes in free speech.

Now, Obama and his spies are working for Netflix, cnn, nbc and other media outlets. They are working to advance the same agenda they advanced when in government: Take down Donald Trump and, as Obama said during his election campaign, “fundamentally change America.”

One of the most shocking, illegal and treasonous examples of the extremes to which the Obama administration went was the Clinton-Steele dossier.

In April 2016, a lawyer from Hillary Clinton’s presidential campaign hired former British spy Christopher Steele to find damaging information on Donald Trump. Steele worked with Russian agents to write unsubstantiated reports that the Trump campaign worked with Russian agents. The Russians told Steele that the Russian government had given the Trump campaign damaging information against his political opponents. They told him that the Russian government had blackmail proving Trump was with prostitutes in a Moscow hotel. Steele sent his dossier to the Obama administration (Jonathan Winer at the State Department and Bruce Ohr at the Justice Department, who relayed the reports to the Federal Bureau of Investigation). Steele sent his reports to a number of news organizations (the New York Times, the Washington Post, the New Yorker, cnn and Yahoo News).

The fbi used the Clinton-Steele dossier to obtain a warrant to spy on the Trump campaign. The Obama administration coordinated the spying to frame Donald Trump with a false accusation that his election campaign illegally worked with the Russian government.

“The officials in the meeting would need to figure out how the investigation could continue despite the fact that its central focus, Trump, was about to be sworn in as president,” Andrew McCarthy wrote for National Review.

These politicians, security officials and spies were literally strategizing how to continue using false accusations to investigate their new boss after he took office. Comey later revealed the strategy suggested by Clapper: Inform Trump about the salacious parts, but not that the fbi was investigating him for collusion with Russia. Comey flew to Trump Tower, told the president-elect that cnn had a dossier of rumors about him. But he did not tell Trump that Clinton’s campaign paid for the dossier, or that the fbi, of which Comey was the director, was investigating him.

According to a House Intelligence Committee report, Clapper discussed the dossier with cnn’s Jake Tapper around the time Comey was briefing Trump on the same topic. After this discussion, cnn reported that Comey had briefed Trump on Jan. 6, 2017, and Buzzfeed published the entire 35-page Clinton-Steele dossier. Once the media had published the dossier, Clapper resigned as director of National Intelligence on Jan. 20, 2017—the day Donald Trump took the oath of office.

In the past, presidents and spies have segued to more ordinary pursuits after their time in government. Not Barack Obama and his national security establishment. They are waging a media war against President Trump. After leaving office, Barack and Michelle Obama signed a deal with the online video giant Netflix. They will be producing anti-Trump documentaries, including an adaptation of Michael Lewis’s book, The Fifth Risk: Undoing Democracy, about Trump’s failure to appoint qualified people to government positions.

Susan Rice also works for Netflix as a member of its board of directors. She recently criticized President Trump on msnbc for suggesting he might accept information on political opponents from foreign governments, despite the fact she was instrumental in the Obama administration’s attempts to use Russian rumors to bar Trump from office.

James Clapper, who was also in that Oval Office meeting, still works as a cnn national security analyst. He condemns Trump for declassifying documents related to the surveillance of his campaign during the 2016 election, and is spreading the rumor that Trump is encouraging Russia to interfere in the 2020 elections.

Meanwhile, nbc has hired former cia Director John Brennan as a national security analyst. Like Clapper, Brennan has been accused of leaking to the press classified information claiming Russia had meddled in the 2016 election. His goal is to defame and depose President Trump—an agenda he can continue pursuing in his new job.

These former cia agents, fbi officials and national security bureaucrats have become some of the best-known faces in a new, hybrid industry where “deep state” spies are rebranded as journalists.

The fact that the major media is hiring spies and agents from the Obama administration is concerning. Since President Trump took office, his Justice Department has more than tripled the number of investigations into government leaks to the media outlets. Many Obama-era spies and intelligence officials are now working for the very news agencies that publish these leaks.

The team of cnn reporters who reported on the Jan. 6, 2017, meeting, where then fbi director James Comey briefed Donald Trump about the salacious parts of the dossier, actually won the Merriman Smith Award for broadcast journalism at the White House Correspondents’ Association dinner the next year. But this team of reporters only knew about that meeting because then Director of National Intelligence James Clapper leaked the information to cnn reporter Jake Tapper.

This type of partnership between spy agencies and the press is routine in Third World countries, but it does not bode well for the health of American democracy.

In the 1970s, when it was revealed that former cia director Allen Dulles attempted to manipulate news media for propaganda purposes by collaborating with 400 American journalists, there was a public outcry. Today, people praise the brave cnn reporters who collaborate with spies against a president whom 63 million Americans voted into office. A truly free press prioritizes evidence-based reporting to inform people about the world around them. Almost nothing is worse for democracy than journalists colluding with political operatives and spies to misinform the public.

Now the very same spies who tried to rig the 2016 presidential election with lies, innuendo and wild conspiracy theories actually work in the mainstream media.

While campaigning for the presidency in 2008, Barack Obama promised to curb data collection of U.S. citizens. But he never kept that promise. Instead, he greatly expanded the power of America’s surveillance state. During his administration, intelligence agents illegally monitored journalists, members of Congress, the Trump presidential campaign and millions of American citizens. Now that Obama is no longer president, many of the 850,000 people who held top-secret clearances in his administration are looking for—and finding—work at Netflix, cnn and nbc.

It’s a matter of fact that top Obama administration officials tried to use their power to subvert the outcome of the 2016 presidential election. In the lead-up to the 2020 election, they are using their power in the media to spread propaganda about the Trump administration.

Americans today are not living in the nation of their Founding Fathers, or even of their own fathers. The nation’s government has been evolving away from the constitutional republic it once was into an authoritarian technocracy run by powerful, unelected bureaucrats, civil servants, military leaders and intelligence agents. Had Obama’s spy agencies been able to overturn the results of the 2016 presidential election and oust Donald Trump from office, they would have staged a coup d’état. It would have actually ended our constitutional republic. If unelected bureaucrats and espionage agents can use propaganda to keep a duly elected candidate they don’t like out of office, what can’t they do?

They rule the country, instead of the American people.

President Trump is leading a populist revolt against Obama’s deep state, and he is making progress toward restoring the rule of law in America. But Obama and his top brass are fighting back, using the extensive media connections they have developed over the last decade.

“There is an unseen reason why troubles are intensifying as never before,” Trumpet editor in chief Gerald Flurry writes in America Under Attack (request your free copy). “You cannot understand events without recognizing this truth. An event occurred in 1986 that marked a major turning point in history. It has radically altered everything that has happened since: culture, family, education, religion, science, finance, politics, international relations—everything we do. Yet what is most remarkable is, almost no one even knows it happened. … We are seeing bold, blatant lies become a bigger and bigger part of today’s political landscape.”

There is a major undercurrent against the rule of law and America’s Constitution today. The deep state, built up by President Obama, continues to oppose President Trump with any means it can find—legal or illegal. Even though Obama is no longer in office, this spirit of lawlessness persists. And a new deep state–media hybrid is blinding many of our people to reality!