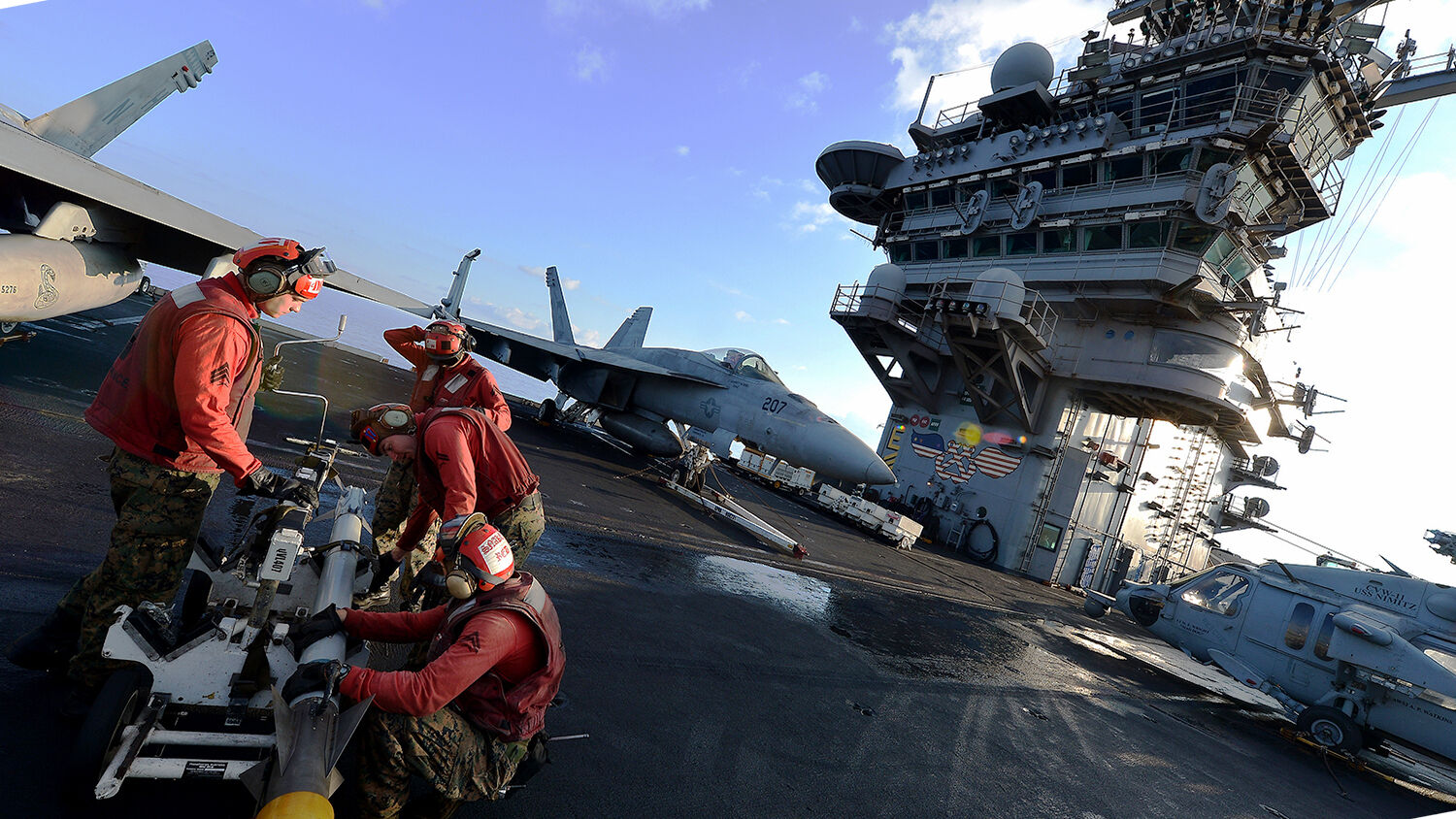 U.S. Navy personnel load a rocket onto an F/A-18E Super Hornet on the flight deck of the uss Nimitz aircraft carrier in the Mediterranean Sea.
ALBERTO PIZZOLI/AFP/Getty Images

Former Army Ranger says much of America’s military spending is in vain.

The United States is investing an enormous amount of resources in “flawed” concepts that will fail to succeed in a full-scale war. This was the verdict of a report released on June 12 by the Center for a New American Security and authored by former U.S. Army Ranger Chris Dougherty. It warned that without a complete overhaul of strategy, America would likely lose a conventional war against a major power, such as Russia or China.

The main claim of the report is that high defense spending creates a false sense of security, but much of that money is misspent. It stated: “For the first time in decades, it is possible to imagine the United States fighting—and possibly losing—a large-scale war with a great power.”

Adapting to a Changing World

The current strategy pursued by the U.S., writes Dougherty, “rests on a foundation of strategic and operational assumptions that were the product of an anomalous historical period of unchallenged U.S. military dominance. The assumptions from that period are now deeply flawed or wholly invalid and must be updated for an era of great-power competition.”

Today’s reality of warfare differs from the last decade in substantial ways. For example, during campaigns in the Middle East, the U.S. mainland was not threatened in nearly the same way it would be if Russian or Chinese missiles were inbound on a daily basis. In a war with other great powers, the U.S. would have to compete with its adversaries without relying on “safe havens” in the U.S. being free from attack.

America also needs to stop expecting to fight on its own terms, Dougherty warns. If war were to break out with a major adversary like Russia or China, no longer would American forces be able to choose the time and location of their battles, as they did with regional threats in the Middle East. American forces would be compelled to fight when and where their enemies decided to attack.

Mobilization speed could also be a problem. Using current strategies against a major power, the U.S. is unlikely to bring its overwhelming force to bear before the enemy seizes vital territory and resources.

Dougherty also criticizes the entire U.S. approach to confronting area-denial weapons possessed by Russia and China. The two nations’ missile strategies are aimed at making it too risky for an enemy to operate large assets like aircraft carriers in certain strategic zones, forcing them to stand off and attack or defend from farther away.

He warns that U.S. strategists have focused so much on directly countering these new missiles that they are neglecting solutions that would exploit their adversaries’ weaknesses.

“When you get into a fight where somebody’s got a shield, you don’t spend your entire time slamming your sword into their shield,” he explained to Military.com. “You try to find a way around that shield.”

“U.S. armed forces are the most powerful in the world by a wide margin, and yet they increasingly run the risk of losing a future war with China or Russia,” warns Dougherty.

The Trumpet has previously looked at the U.S. military’s wasteful spending, showing that money does not necessarily buy security. In recent wars, America has spent mountains of money, but made little progress.

Herbert W. Armstrong, founder of the Plain Truth newsmagazine, predecessor of the Trumpet, warned as far back as the 1950s that America needed to make major changes if it is to win another war.

What kind of changes did he recommend?

Only three years after he said that, the U.S. entered the Vietnam War. By the time that conflict ended with America’s retreat and the fall of Saigon, American strategy in East Asia and its global prestige were severely damaged.

Since then, America has had no real victories, only drawn-out conflicts costing it dearly in both money and blood. America had indeed won its last war, just as Mr. Armstrong said.

God promised blessings for obedience to His law and curses for disobedience. One of these promises is directly applicable to America’s military today: If the nation refuses to obey His laws, God says, “I will break the pride of your power; and I will make your heaven as iron, and your earth as brass: And your strength shall be spent in vain …” (Leviticus 26:19-20).

God specifically mentions military defeats as part of these curses of disobedience. “The Lord shall cause thee to be smitten before thine enemies: thou shalt go out one way against them, and flee seven ways before them …” (Deuteronomy 28:25). The U.S. experienced this in Vietnam and in every war since then.

America’s misspending is only part of the problem. No matter how advanced the U.S. military’s capabilities are, they will not be able to win another war. This prediction is not just based on history and current events, it is based on the proven track record of fulfilled Bible prophecy.

To understand more about the causes—and solutions—of America’s military malaise, and how the Bible predicted them far in advance, request a free copy of He Was Right and read “America Has Won Its Last War.”