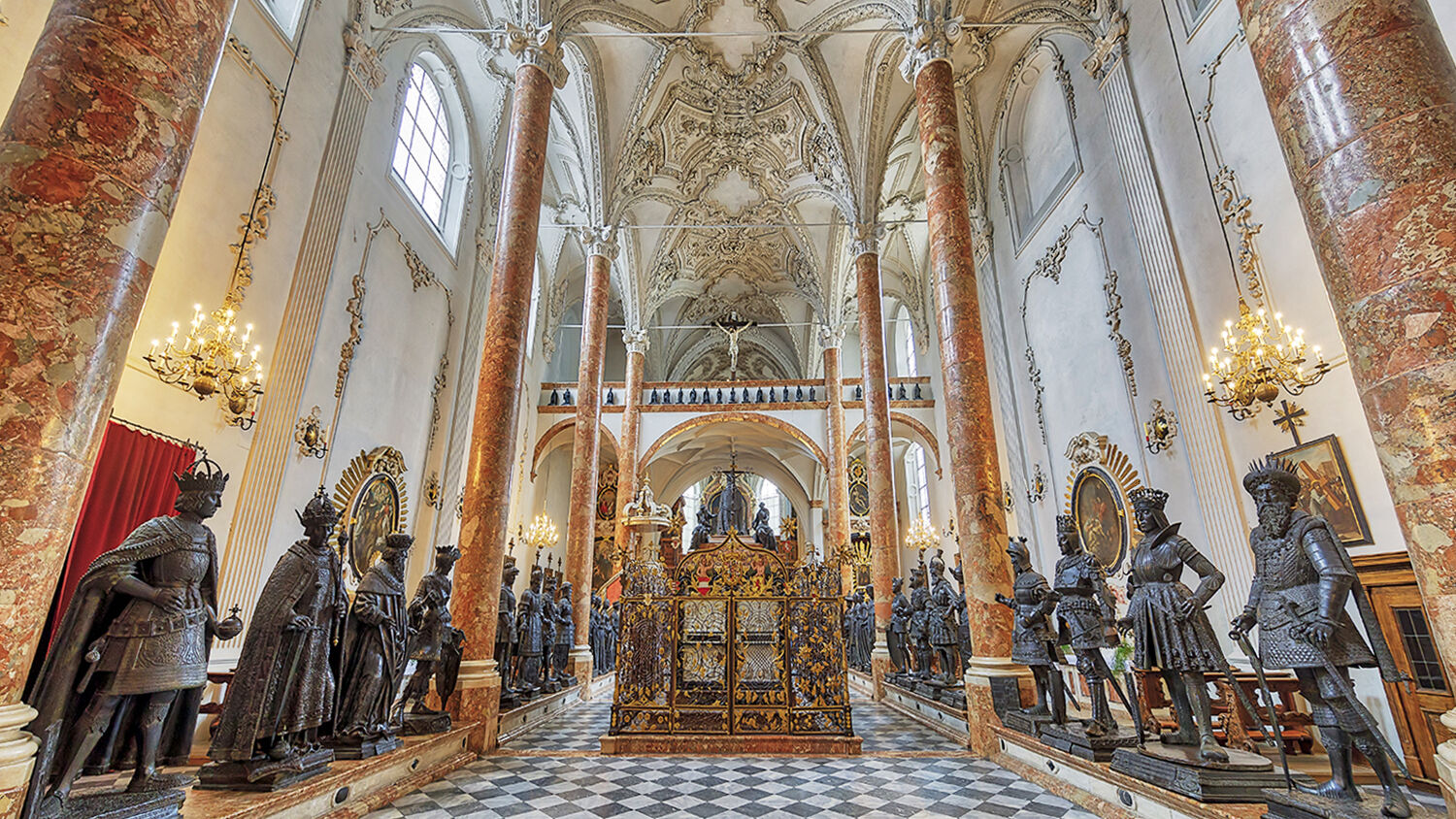 The Hofkirche (Court Church) in Innsbruck, Austria, is known by locals as “Schwarzmander Church” thanks to the 28 life-size bronze figures that stand guard, watching over the tomb of Emperor Maximilian i.
Laszlo Szirtesi/Getty Images

On January 11, Austria began celebrating the “Maximilian Year,” honoring the 500th anniversary of the death of Holy Roman Emperor Maximillian i. The Catholic Church and Austrian authorities are organizing over 100 celebratory masses and other events. The yearlong, large-scale, nationwide celebration marks a striking change in how modern Austria deals with its history. During the rule of the Holy Roman Empire, such venerations were common—though they always ended bloodily.

Emperor Maximilian i is seen as the founder of Austria’s Catholic Habsburg Empire. Through marriages, wars and oftentimes violent religious and cultural missionaries, the emperor extended the dynasty’s reach in Europe and laid the foundation for the Habsburgs’ possessions in Latin America. He was crowned emperor of the Holy Roman Empire in 1508 and died 11 years later.

Maximilian’s ambition was to revive the empire of Charlemagne, who united all of Western Europe under the Catholic faith in a.d. 800. Lacking military strength, Maximilian never achieved his goal. The Austrian government-sponsored website The World of the Habsburgs commented, “Although Emperor Maximilian i, a son of Frederick iii, is principally known for his policy of dynastic marriage, he by no means fought shy of war; within 40 years he conducted no fewer than 25 military campaigns.”

He used the media of the time, including the newly developed printing press, in a revolutionary way to promote himself and the empire’s heritage. Due to his heavy promotion of his image on coins throughout the empire, ads today portray him as a “selfie-taking” emperor.

I’m in Innsbruck for a conference on Emperor Maximilian I, for the 500th anniversary of his death. His concern that he should be remembered after his death is legendary: is this giant billboard outside the main station enough for you, Max? #FollowMax500 1/ pic.twitter.com/JsO1st6aXI

The underlying goal is to raise awareness for the historic figure of Maximilian i and his importance for the state of Tyrol. The events will attempt to revive the state’s history and emphasize the present-day significance of Maximilian i for Tyrol.

Tyrol was Maximilian’s primary residence, and the state honors his anniversary with over 120 events, including tours, exhibitions, light shows, concerts, musicals and children’s programs.

In “Austrian Catholics Start Year Celebrations for Emperor Maximilian,” Catholic news service Crux wrote the following at the beginning of the celebration:

The country’s decision to publicly honor a former Catholic ruler, who died Jan. 12, 1519, marks a noteworthy change in mainstream Austrian culture, which has sought to distance the country from its Christian past and national history in recent decades.

Why Not Venerate Maximilian?

Austria today is reviving its buried history for the same reason the Holy Roman Empire has always done. When the Habsburg dynasty began closely cooperating with the Vatican, they needed a saint whom the people could venerate and rally around.

One of Maximilian’s efforts to bring the medieval traditions back to life was to honor a “saint” of his time: Leopold iii (1073–1136), ruler of Austria. Next to Charlemagne, Leopold iii is credited with having played the most influential role in setting up Austria’s Catholic identity. The abbey in Klosterneuburg is his burial place and today stands as one of the most impressive monuments to his legacy. The monastery is marked by an impressive large iron crown on its dome, representing the crown of the Holy Roman Empire.

Austria portrays this special relationship in the exhibition “The Emperor’s New Saint—Maximilian i and Margrave Leopold iii in Times of Changing Media.” Maximilian promoted Austria’s new saint on a level not seen before. But why did he do it? The World of the Habsburgs website explains:

The veneration of canonized rulers as patron saints of the Habsburg lands was not only a question of piety, but also an intensely political affair. The ruling monarch saw himself as a successor of the saints, whose reliquaries served as attributes at the ruler’s accession as a sign of legitimate, divinely ordained sovereignty. …

A suitable figure was found in Margrave Leopold iii from the house of the Babenbergs ….

The veneration of saints or rulers of the past served as a tool to solidify Austria’s identity, a heritage the people ought to live and fight for—a powerful force that could be wielded by the political leader.

Austria is promoting Maximilian i for the same reason. But should a man like Emperor Maximilian i be celebrated? The veneration itself doesn’t seem harmful, but it has a powerful effect on the people of the land that few realize.

There are parallels between the Habsburgs’ veneration of Leopold iii and the Holy Roman Empire’s level of power: The more they venerated Leopold, the more powerful and violent the empire became. Cherishing the heritage unified the citizens of the empire in confrontations with Turks, Protestant reformers and Jews.

At one point in time, Maximilian i even believed that Jewish writings, such as the Talmud, blasphemed Jesus. His call to burn and destroy all copies was revoked by the pope. After the death of Maximilian i, the veneration of Saint Leopold continued as a particular way of counteracting the Protestant Reformation.

Maximilian i’s grandson, Charles v, who succeeded him as emperor, also swore his alliance to the Catholic Church.

In Charles v’s conquests, he brutally converted many in Latin American to Catholicism and pushed back a Muslim invasion. But his greatest challenge came with the Protestant Reformation, which divided Christian Europe. He ordered the killing of “heretics” and advanced the Inquisition. As Protestantism swept through Europe, heretics were brutally tortured until they denied their faith or lost their lives. But the reformers grew stronger and formed military alliances to fight back. The religious conflict culminated in the Thirty Years’ War (1618-1648).

“The world has probably never seen a more vile period than those dark and miserable years of the 14th, 15th and 16th centuries,” Trumpet executive editor Stephen Flurry commented in Germany and the Holy Roman Empire.

How did the Catholic Church and its allied emperors justify such brutality? They portrayed their heritage, faith and saints as the supreme achievement of human history, an achievement that needed to be defended—violently, if necessary.

In the end, the Protestant Reformation broke the hold of the Catholic Church in many European countries. But due to the unyielding rule of the Habsburg dynasty, Austria, Spain and Italy remain predominately Catholic to this day.

As Protestants sought to do away with the polluted Catholic history and culture, the Holy Roman Empire promoted it even more.

Guttenberg and the Holy Roman Empire

In 1663, Saint Leopold was promoted as the patron saint in all the lands of Austria by his namesake, Leopold i. He started a tradition that continues till this day. Every year on Leopold’s Day (November 15) pilgrimages are held.

One of the other things Leopold i did was elevate the Guttenberg dynasty to the status of Reichsfreiherr, which translates to “Baron of the Empire.”

Following the lineage of the Guttenberg dynasty brings us up to the modern day. Former German Defense Minister Karl-Theodor zu Guttenberg is a descendant of Holy Roman Emperor Leopold ii (1747–1792), also of the Habsburg dynasty.

On Nov. 15, 2018, Guttenberg gave a festival speech at the traditional regional Austrian holiday “St. Leopold’s Day.” Guttenberg said, “In Germany, it would not be possible to print St. Leopold on the front page of the invitation. We would have a month-long debate on whose toes we could possibly step on by doing so.”

The history of Leopold iii is more controversial than one might think. He laid the foundation of religion, which is something that has caused many violent conflicts in Europe. Those who followed in Leopold’s name used him as an emblem during their bloody campaigns.

Guttenberg knows that Protestants, Muslims, Jews and even liberal Catholics look at these “saints” of old with disdain. Still, he praises how Austrians honor their history, and he wants Germans to do the same.

In 2017, he told Bavarians that if they don’t “recall where we came from, what our history means,” then other cultures will come in and define Germany. He urged them to remember their history “with its dark and bright sides” and to take a “non-apologetic stand for our culture.”

Maximilian i faced a similar struggle as Catholic leaders do today. The church is plagued by scandals and departing members. Maximilian used the media, cultural events and the veneration of saints to bring the empire back to its peak. Historically, those who didn’t follow along became an outsider, then persecuted, and eventually a martyr.

The veneration of saints and the corresponding bloodshed follows a historic pattern in which the Holy Roman Empire thrived. It seemed peaceful in the Middle Ages, and it seems peaceful today. But look how it ended back then, and you will see how it will end today. The Bible warns that bloodshed is coming.

In 1935, a seemingly peaceful Adolf Hitler claimed to follow in the tradition of Charlemagne. Years later, he caused the greatest bloodshed seen on Earth. This isn’t coincidence. Professor and renowned German medieval researcher Johannes Fried pointed out in an interview with the German popular newspaper Die Welt that Hitler’s statements were “preparing for his own acts of violence, to praise Charles was a strategy of legitimacy.” The Trumpet and its predecessor, the Plain Truth, have warned for decades that history is about to repeat itself.

It Will Happen Again

The Bible predicts with absolute certainty that it will happen again!

Daniel 2 prophesied that there would be four world-ruling empires before God intervenes supernaturally to save and rule mankind. History clearly identifies these empires as the Babylonian, Persian, Greek and Roman empires. Daniel 7:23-24 show that the “fourth kingdom,” or the Roman kingdom, would have 10 successive kings or resurrections. The last seven are led by the Roman Catholic Church, forming the Holy Roman Empire.

God allows this empire to rise seven times so that mankind will learn the consequences of sinning against His law. After the next and final resurrection of this evil empire, Jesus Christ will return and put an end to it (Daniel 2:44; 7:27; Revelation 17:14).

But before His return, this world and the modern-day nations of ancient Israel (primarily the United States, Great Britain and the Jewish nation in the Middle East) will suffer in an unparalleled way before they repent. To learn more about these prophecies and the identity of nations, read The United States and Britain in Prophecy, by Herbert W. Armstrong. All of our literature is free.

The last resurrection will be the most powerful. Correspondingly, it will also be led by the most qualified leader. Daniel 8:23 reads: “And in the latter time of their kingdom, when the transgressors are come to the full, a king of fierce countenance, and understanding dark sentences, shall stand up.” In reference to that verse, Trumpet editor in chief Gerald Flurry wrote:

I believe it will be a man like Karl-Theodor zu Guttenberg, who actually holds the title “Baron of the Holy Roman Empire.” Daniel 11 describes the European strongman as being eloquent and coming to power by flatteries. Merkel’s coalition in Germany is very weak; it is on the verge of failing. I believe when Merkel leaves office, you will see the strongman of the Holy Roman Empire get control.

The leader of this rising empire has to be Roman Catholic, grounded in the history of the Holy Roman Empire, and a dynamic leader that all of Europe can identify with. Guttenberg fulfills these qualifications and venerates the Holy Roman Empire as emperors before him did.

Austria is already reviving the heritage of the Holy Roman Empire. But it won’t be until Germany fully embraces that history and has its Charlemagne-like leader that we will see the violent side of this empire in Europe. This will happen sooner than you might think.