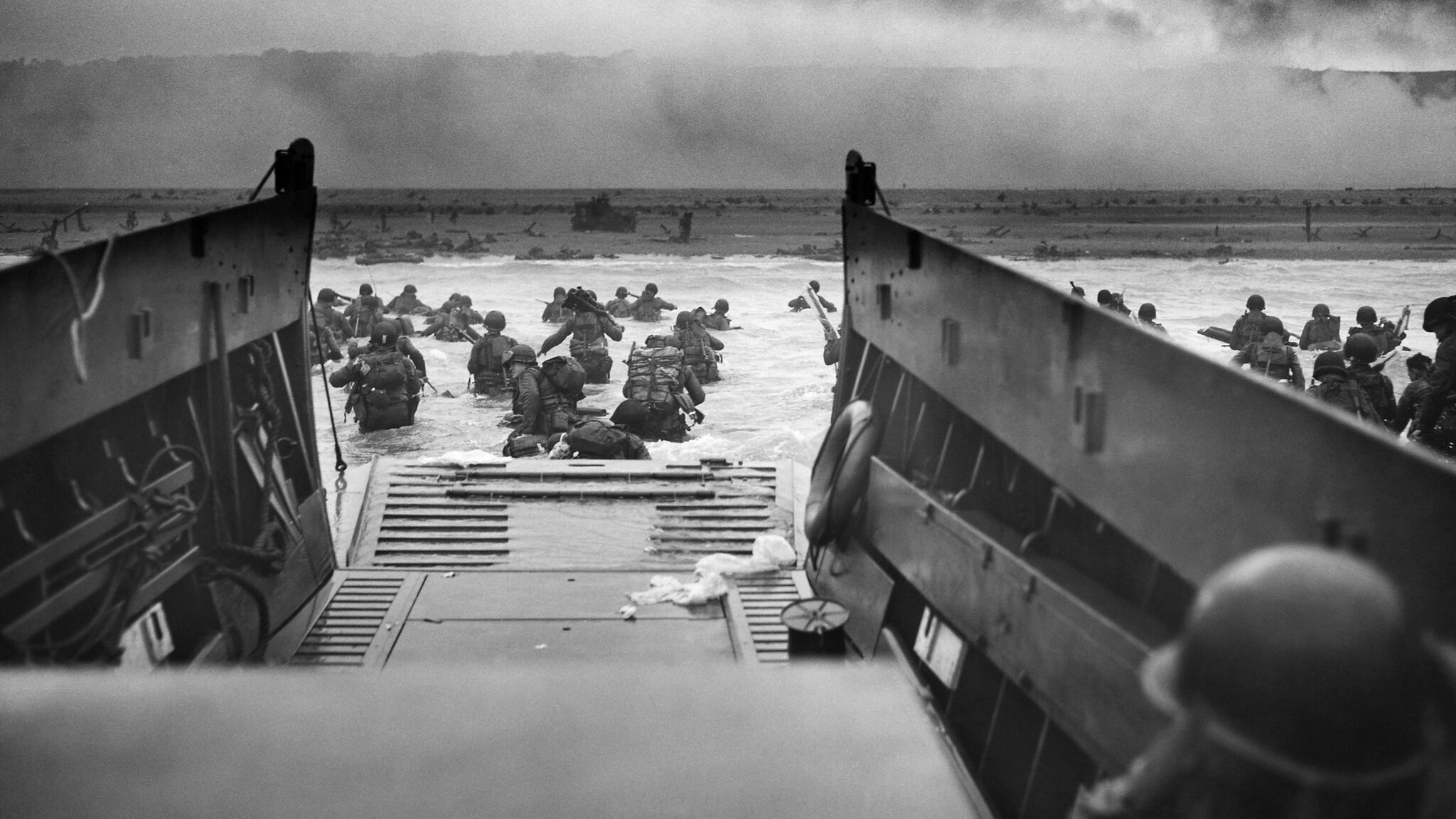 Why You Need to Remember D-Day

Why You Need to Remember D-Day

The coast of Normandy, France, is streaming with former soldiers, politicians, reporters and tourists this week. Tomorrow marks the 75th anniversary of the D-Day invasion, the largest amphibious landing in history. More than 156,000 American, British, Canadian and other Allied troops crossed the English Channel and broke upon Adolf Hitler’s fortifications to try to wrest Europe away from Nazi Germany.

Two summers ago, I walked that coast. It was one of the most moving experiences of my life. It etched in my mind how important it is that we remember history. We must make it real—because it was real.

Whether it’s Normandy on June 6, 1944, or ancient China or any other event, history can feel distant, sterile. It’s text on a page or images on a screen. You don’t understand the reality of the past—or the future, or even the present—unless you project yourself into it by an act of imagination. Not daydreaming or fantasy, but well-informed, purposeful, life-changing imagination.

Fail to do so, and one day reality will brusquely intrude without warning and impose its inescapable lessons firsthand.

My imagination was jolted at Utah Beach, Pointe du Hoc and Omaha Beach. Leaving footprints in those sands—so easy to walk now, so stained with blood then. Peering out from inside the cold concrete German bunkers at the gray seas once dotted with thousands of Allied ships. Traversing craters 40 feet wide and 20 feet deep caused by Allied shelling. It was awe-inspiring and humbling to think of the college-aged boys who traveled to this remote shore, swallowing their fear, summoning the willingness to kill and be killed, to liberate people they had never met.

They faced artillery, drowning, mines, bullets, mortars, falling and other perils in a strange land. And for many, that was where they remained, never to return home.

The exact number of men drowned, shot and otherwise killed that day and in the action that followed is unknown. But the loss of life was at least 4,500, probably more than 10,000. Today, 9,386 Americans are still there, buried near Omaha Beach at the American Cemetery in Collville-sur-Mer. Canadians buried their dead at Bény-sur-Mer; the British at Bayeux. More gravestones can be found elsewhere.

It is emotionally overwhelming to stand in a green field among thousands of white stone monuments—standing in perfect attentive formation like the soldiers over whose bodies they stand, inscribed with dates of death clustered mostly around a few blood-soaked months in 1944.

These men were willing to do whatever was needed to get the job done. And the job was saving civilization as we know it. The flame of freedom in Europe had been extinguished. Adolf Hitler, the Nazis, the German nation, its allies and collaborators in government, society and even religion had taken over. Albanians, Belgians, Czechs, Danes, Dutch, Finns, French, Hungarians, Slovaks and populations beyond were controlled by Nazis in Berlin.

At incomprehensible cost, these young men did it: By day’s end, they had taken control of the beachhead, the literal starting point of victory in Europe and Allied victory in the Second World War.

Driving through the coastal towns, you still see signs proclaiming the gratitude of the French to the Americans, the British and the Canadians for sending their sons—to fight, to die, to set them free.

D-Day was real. But it happened 75 years ago. Only the ancient among us remember this history firsthand. The men still living who stormed those beaches in their early 20s are now in their late 90s. Amazingly, there are still about 300 who traveled to Portsmouth, England, today, and will cross the Channel tonight and arrive tomorrow in Normandy, France. By the next major anniversary, many of them will be gone.

For most of us, wars and the reasons they are fought are a hum in the background, easy to ignore.

For 93 percent of humanity, remembering and knowing that D-Day was real requires an act of imagination. Most of us are far removed from the clamor of war. Our wars are fought by professionals, on small scales in faraway, obscure theaters. We see 90-second reports on them every now and then. For most of us, wars and the reasons they are fought are a hum in the background, easy to ignore.

Because men fought and bled and died for France and for all of us, our world is much different from what it would be otherwise. We have the luxury to devote our attention to other concerns. We have the luxury of fighting far pettier battles. We have people waging battles for the “right” for a man to be called a woman, for college students to be protected from hearing people disagree with them, for the destruction of traditional family and “toxic masculinity.” We feel so insulated from war that we have a 29-year-old member of Congress claiming that carbon emissions are our generation’s World War ii. We have presidential candidates saying that climate change is their primary political concern.

Entrusted with the future of our country, these leaders—and many others, less directly—are squandering our time, our resources and the sacrifices of our predecessors to serve their ideologies, their careers or even just their bank accounts. They are leading us back into the dangers that ultimately cause world war.

They forget history. Through neglect, they make what was real unreal, simply because it occurred one lifetime ago.

The last world war ended 15 months after D-Day with America’s atomic strikes on Hiroshima and Nagasaki. The explosions and radiation, which killed hundreds of thousands, cut short the war and saved hundreds of thousands of other lives, but they also thrust the world into a new era: the age of weapons of mass destruction.

Few people alive are old enough to remember that. The rest of us must imagine the reality of an entire city being destroyed by a single bomb. But few make the effort to do so.

Especially since the end of the Cold War, the risk of nuclear war has almost disappeared from most minds. But the number of weapons of mass destruction is far higher than at the end of World War ii, the number of countries possessing them is far greater—and the destructive power of nuclear weapons has increased exponentially. A single bomb can be far more powerful than all the bombs dropped during World War ii combined.

The Global Challenges Foundation says the world now contains 15,350 nuclear weapons. “Right now, 4,000 of these weapons are in active deployment, meaning that they are available for use at any time,” it says. “A nuclear war could be just moments away.”

More and more nations have been working to build or improve nuclear weapons and the means of delivering them. Among them are Germany and Japan, Axis powers of World War ii. Also among them are radical nations like Iran and North Korea. Many of them are becoming increasingly belligerent, like Russia and China. Russia’s new “Satan 2” missile is the largest ballistic missile in history and can basically destroy not just a city but any European nation or an area of the U.S. as large as Texas. Several major nations are developing missiles that can fly triple the speed of any bullet and can maneuver to avoid interception.

These nations—and perhaps smaller groups, like terrorists—can unleash suffering and death orders of magnitude beyond D-Day, Hiroshima and Nagasaki combined.

But our leaders—and we ourselves—have forgotten what it means to wage war, to suffer and die. We skim past the news of current wars, and we ignore the proliferation of nuclear weapons and people willing to use them. We spend our imaginations on entertainments, not history.

The warning signs were there before World War ii. They are certainly here now. It is far more comfortable to insulate ourselves from that reality, but very soon, reality will intrude.

The threats facing our world are about to erupt into actual disasters—disasters that shatter our illusions.

The Bible prophesies that Europe is about to be swallowed in tyranny again—one even more barbaric and oppressive than that of World War ii.

Back then, a generation of young Americans, British and Canadians rose up to defend Western civilization—at the greatest cost they could pay. But these end-time prophecies contain not a word about any resistance coming from these countries. They indicate that they will be largely engaged in civil war against themselves. These nations are explicitly counted among the victims of a new German-led empire that will dominate the Continent.

Compare our nations today to even what they were at the time of the last world war, and it is not difficult to see why the multiplying threats will easily overcome us this time. We not only lack any semblance of faith in God, we lack moral fiber, we lack historical memory, and we lack even the sense to know that transgender rights, racist police and carbon emissions are phony battles.

The Bible is also clear that nuclear war is coming. Jeremiah 2:15 discusses cities “burned without inhabitant.” Habakkuk 3:17 describes plants stripped of blossoms and fruit, fields that yield no food, and stocks of animals wiped out. Verse 16 shows this is the work of invading soldiers. Amos 5 describes an attack destroying 90 percent of a city’s population, and then 90 percent of those remaining surviving—99 percent destruction!

The weapons we possess could bring these prophecies to pass overnight. The Outrider foundation says “only 100 15-kiloton bombs—out of the current global stockpile of almost 15,000 nuclear weapons—need to detonate in order to create ‘nuclear winter’ and make life on Earth uninhabitable.”

In Matthew 24:21-22, Jesus Christ prophesied, “For then shall be great tribulation, such as was not since the beginning of the world to this time, no, nor ever shall be. And except those days should be shortened, there should no flesh be saved”—not one person on Earth would live!

You must study history and you must work your imagination to recognize that these warnings are real.

That time is coming. Those nuclear weapons will be used. And the signs Christ gave of when this warfare would break out are being fulfilled right now! You can read about this in Trumpet editor in chief Gerald Flurry’s booklet Nuclear Armageddon Is ‘At the Door.’

You must study history and you must work your imagination to recognize that these warnings are real.

Isaiah 33:18 states, “Thine heart shall meditate terror.” “God says to meditate on the terror to come. We must face it,” Mr. Flurry writes. If we don’t, we become susceptible to deception, complacency and other nation-destroying threats.

Thankfully, the same scriptures that foretell these disasters also show their hope-filled outcome. This time it is not the young masculinity of a generation fed to machine guns, but something far more powerful and far more permanent.

Matthew 24:22 finishes by stating that “those days shall be shortened.” Each prophet who forecast this destruction also foretold what lies on the other side. Amos 9 describes Israel rebuilding the cities destroyed in war. In fact, these people have so much peace and abundance, they cannot gather it all in fast enough (verse 13). Jeremiah says that despite all this trouble, “there is hope in thine end” (Jeremiah 31:17).

How will “those days be shortened”? What is the “hope in thine end”? Nothing less than the return of Jesus Christ. The coming destruction will not only punish us for our sins of complacency, immorality and rebellion against God, but it will also teach us to turn from those sins to our Creator.

“[T]hey shall all know me, from the least of them unto the greatest of them, saith the Lord …” (verse 34). “[T]he earth shall be filled with the knowledge of the glory of the Lord, as the waters cover the sea” (Habakkuk 2:14).