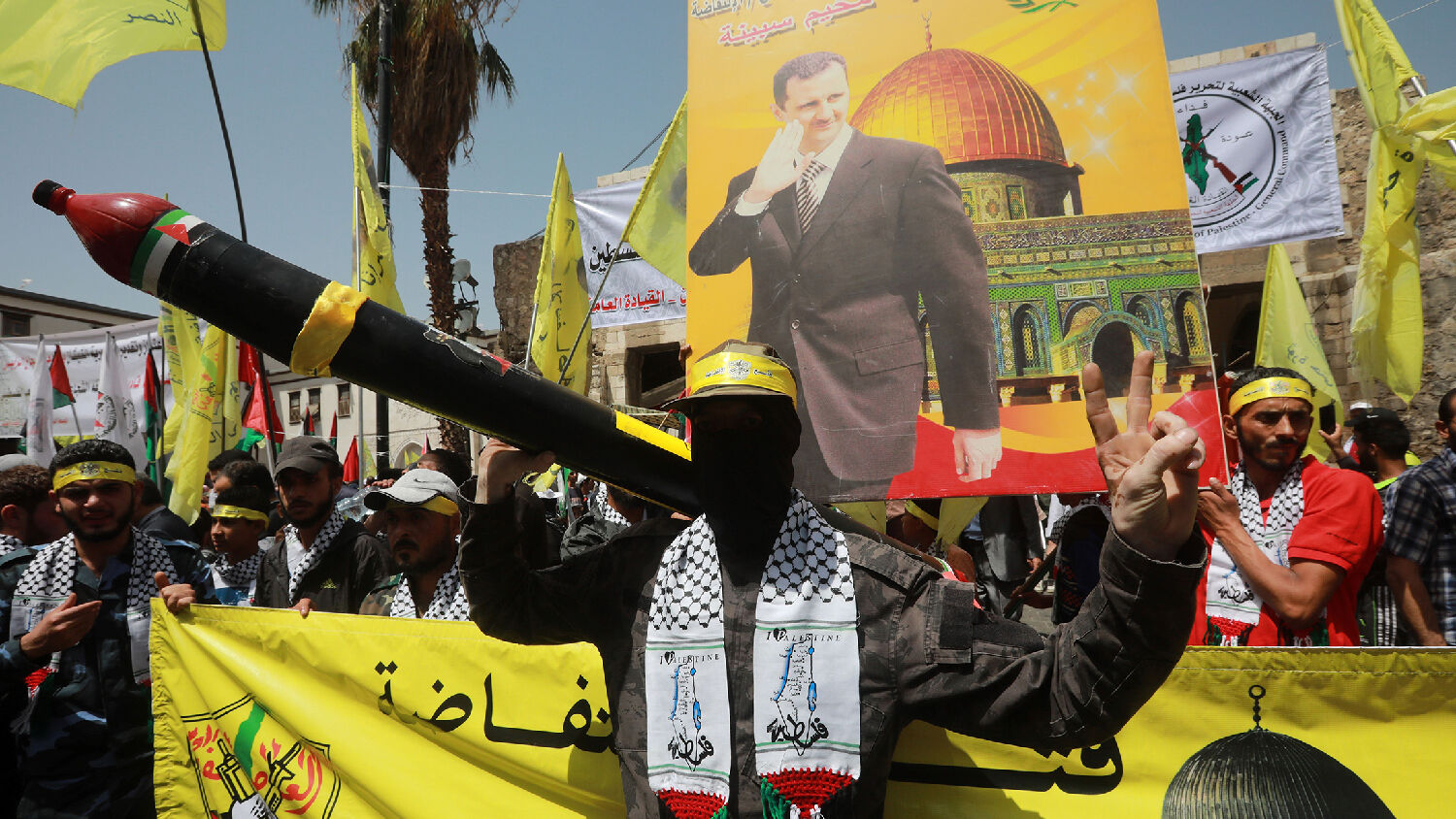 A Palestinian man poses with a fake missile as members of Fatah al-Intifada march to celebrate al-Quds Day (Jerusalem Day) in the Syrian capital of Damascus on May 31.
LOUAI BESHARA/AFP/Getty Images

Israel’s response will lead to Iran being kicked out of the war-ravaged country.

Using proxy forces in Syria, Iran again launched rockets aimed at Israel on the evening of June 1. Israel responded swiftly to these attacks, targeting Syria and causing the war-ravaged country to suffer even more, hastening the fulfillment of Syria’s prophesied split from Iran.

The rockets aimed at Israel were reportedly launched from the Damascus area and appeared to be long-range models. One fell short into Syrian territory, and the other struck inside Israel’s Golan Heights.

The Israeli Defense Forces (idf) did not specify who launched the attack, stating instead that they view “the Syrian regime as responsible for all attacks against Israel from Syrian territory.” Multiple news sites reported sources saying that this was clearly the work of Iran’s Shiite proxy terrorist group, Hezbollah.

Iranian troops and many of its proxy militias are working in Syria to defend President Bashar Assad’s regime in the nation’s ongoing civil war. This provides Iran an ideal launching pad for strikes against Israel, while hiding in the midst of a foreign nation and using several proxy forces.

On May 12, following increased United States sanctions on Iranian oil, four oil tankers off the coast of the United Arab Emirates were attacked. U.S. intelligence indicates that Iran was behind the attack. On May 14, Iranian-supported Houthi rebels used seven drones to attack two oil facilities in Saudi Arabia, a major oil-producing country and rival to Iran. On May 19, a rocket—launched from a region known to be controlled by many Iranian-backed Shiite militias—landed less than a mile from the U.S. Embassy in Baghdad.

“After the attacks in Iraq, Saudi Arabia and the U.A.E., this is another message the Iranians are sending,” said Lebanese Brig. Gen. Abdel Kader (Ret.). “Tehran is saying, ‘We are capable of wreaking havoc with the security and stability of the whole region’” (theNational.ae).

Iran’s use of proxies allows it to divert blame. “It is typical of the anonymous way they operate,” Kader said. “Nobody can prove that the official regime of the Islamic Republic is behind these attacks.”

Although some of Iran’s forces and the proxy fighters it supports suffer losses in retaliation efforts, Iran is willing to pay this small price while its host nations bear the brunt of the punishment. This is exactly what happened in the latest round of rocket attacks fired from Syria.

Within hours of being targeted, Israel responded with rocket attacks against the Syrian military, including two artillery batteries, observation and intelligence posts, an aerial defense battery, and, according to Syrian media reports, other Iranian targets in al-Kiswah, south of Damascus. The strikes reportedly killed 10 people. The idf identified the targets and said that Israelis “hold the Syrian regime accountable and will firmly operate against any attempt to harm Israeli civilians.”

We hold the Syrian regime accountable and will firmly operate against any attempt to harm Israeli civilians. pic.twitter.com/XtDTqz7Btc

In a second attack on Sunday, Israel fired on a Syrian air base in the city of Homs, reportedly killing five and destroying a rocket warehouse. Also stationed at the airbase are Iranian and Hezbollah forces. idf officials had previously identified the base as a place where Iranian forces are attempting to entrench themselves in Syria.

At a ceremony marking the unification of Jerusalem during the 1967 Six-Day War, Israeli Prime Minister Benjamin Netanyahu said, “While we do not make light of Iran’s threats, neither are we deterred by them, because anyone who tries to hurt us will be hurt far worse. We have proven this many times in the history of our state. We proved it just last night.”

While Iranian forces and its proxy fighters are suffering from Israeli strikes, Syria is bearing the brunt of the attacks. It is suffering for harboring Iranian militia. If Syria ever wants to rebuild from its eight-year civil war, it will have to kick Iran out. The Bible prophesies that this will happen.

In “The Imminent Iran-Syria Divorce,” the Trumpet stated that Iran’s presence in Syria is part of its goal to control the Shia Crescent—land stretching from Iran and Iraq to Syria and Lebanon on the west coast. “Iran needs to control this territory in order to project power into the Mediterranean and to threaten Israel” (ibid).

The Bible clearly prophesies of an end-time allegiance of many of the countries in the Shia Crescent.

Daniel 11:40 identifies an end-time power bloc called “the king of the south,” which Trumpet editor in chief Gerald Flurry proves in his free booklet The King of the South is a radical Islamist alliance, led by Iran. This alliance will include Iraq, Egypt, Ethiopia, Eritrea, Libya and other nations. It will not include Syria.

Psalm 83 identifies another end-time alliance. “For they have consulted together with one consent: they are confederate against thee: The tabernacles of Edom, and the Ishmaelites; of Moab, and the Hagarenes; Gebal, and Ammon, and Amalek; the Philistines with the inhabitants of Tyre; Assur also is joined with them …” (verses 5-8). This alliance has never occurred in history, so it is for our day!

The Psalm 83 alliance is between certain Middle Eastern nations and Germany (Assur). One of the nations in this alliance is the Hagarenes, or modern-day Syria.

Based on these prophecies, we know by the full assurance of God’s inspired Word that Iran’s position in Syria is not permanent.

Losing Syria will cut Iran off from the eastern Mediterranean, but as we have stated, this could lead Iran to “redirect more attention on its strategy to control the nations along the Red Sea and into Egypt, which will give it Mediterranean access from the south” (ibid). As Daniel 11:40-43 show, these nations will ally with Iran.

In “How the Syrian Crisis Will End,” Mr. Flurry wrote: “What we are seeing right now in Syria is a major biblical prophecy in the process of being fulfilled! What happens in Syria will lead to mighty nations changing course and the foundations of this world being shaken!”

This is a powerful admonition to watch what is happening in Syria. The more Iran causes Syria to suffer, the more it is leading to the fulfillment of Bible prophecy and the formation of the king of the south and Psalm 83 alliance. For more information on these prophecies, read Mr. Flurry’s article “How the Syrian Crisis Will End.”