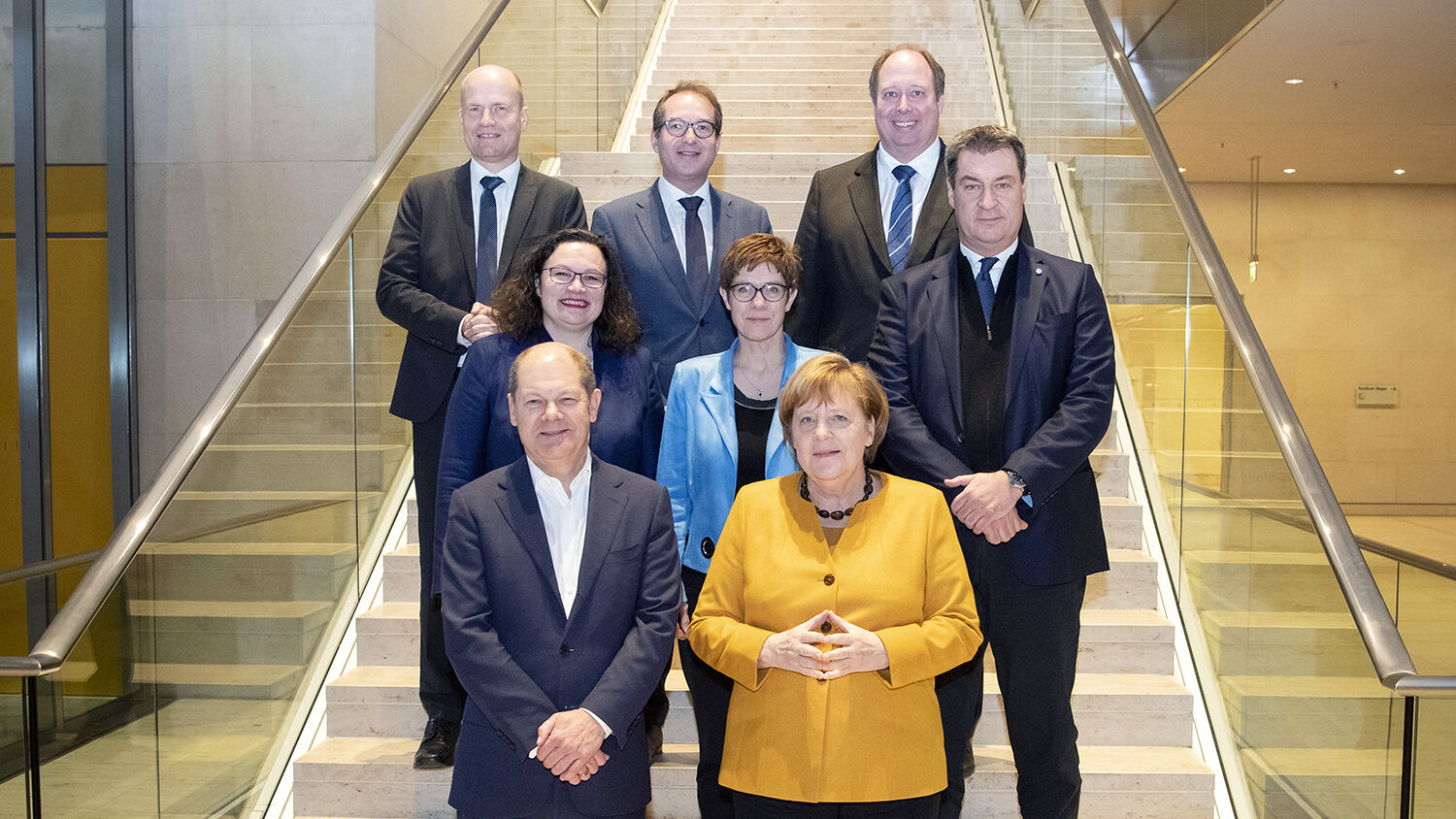 The coalition committee of the cdu, spd and csu pose for a photo on March 14 in the Bundestag in Berlin, Germany.
Guido Bergmann/Bundesregierung via Getty Images

Chancellor Merkel’s term could end sooner rather than later.

Andrea Nahles, leader of Germany’s Social Democratic Party (spd) and a major supporter of the current coalition government, announced her resignation on June 2. This could further destabilize the already fractured coalition, bringing a quicker end to Angela Merkel’s term as chancellor.

Nahles took over the party leadership in April 2018 in hopes of winning over more voters to the spd. She was the strongest spd supporter of the coalition with Merkel’s Christian Democratic Union (cdu) and its sister party, the Christian Social Union (csu). However, it appears that her efforts have not done much good for the party, with spd popularity dropping 3 percent over the past year.

If the spd gets a leader who aligns it further with the left, the party may leave the coalition and potentially force snap elections and end Merkel’s chancellorship. Or Merkel’s party may make a minority government in partnership with the pro-business Free Democratic Party (fdp) and the Greens. These parties differ sharply on various issues.

Many have warned that the coalition could soon collapse, and various cdu members have called for “a new start” to renew the party’s image. Without it, they believe the coalition will be rejected by the people.

Olaf Scholz, vice chancellor of the spd and its most senior politician, has ruled out a coalition with the cdu. Even if the coalition does not collapse immediately, voters are tired of it and ready for change.

“Three grand coalitions in a row would not do democracy in Germany any good,” Scholz said during an interview with Tagesspiegel newspaper on June 1. “No one wants a continuation of the current coalition after 2021—not the citizens, not the cdu, and certainly not us Social Democrats.”

European election data has shown that voters in Germany are increasingly abandoning traditional parties such as Merkel’s cdu in favor of smaller groups.

In search of change, German voters are increasingly willing to challenge the status quo. In recent elections for the European Parliament, the Greens, which usually receive a small percentage of the vote, came in second only to the mainstream, center-right cdu and csu. This is a major upset in the traditional order: The Greens sent 18 members to European Parliament, while the spd sent only 16, winning only 16 percent of the vote.

Although still in the top spot, the cdu received its worst-ever results. Some polls now suggest that the Greens have surged ahead to become Germany’s number one party.

cdu and spd leaders are racing to reassure everyone that the coalition will not fall apart. “I expect the spd will make the now-necessary personnel decisions quickly, so as not to impair the ability of the grand coalition to act,” said Annegret Kramp-Karrenbauer, cdu leader and Merkel’s designated successor.

But the reality remains that the coalition is more fragile than ever. If resignations and loss of support in the polls continue, Merkel’s term as chancellor may be over sooner than expected.

Will her successor manage to fix the problem? Or will Germany continue having weak coalition governments? Although nobody can predict the intricate details of what will happen next in the coalition’s troubled saga, there is a way to know what will ultimately happen in this developing German leadership crisis.

The Trumpet looks at these events from a long-term perspective through the lens of Bible prophecy. The Bible prophesies that a strong leader will come to power in Germany. He will be “a king of fierce countenance,” who will subjugate the world by the combined power of a united Europe. He is prophesied to be a German, the leader of the biblical “king of the north” (Daniel 8:23-24; 11:40-45).

In our booklet on this subject, A Strong German Leader Is Imminent, Trumpet editor in chief Gerald Flurry writes:

The leadership crisis in Germany is another sign of a dissatisfied country, which will help bring about the rise of this undemocratically elected “king.” Last year, when similar coalition meltdowns were plaguing the German political scene, Spiegel Online called this new, divided epoch in German politics the “era of instability.” That instability is only getting worse.

In 2009, Mr. Flurry said in a Key of David program that this prophesied strong leader could “take advantage of a weak coalition” to enter power. The fractured political landscape in Germany is creating the ideal conditions for this to be fulfilled.

To read more about this coming strong leader and how a German-led Europe is about to radically change the world you live in, request a free copy of A Strong German Leader Is Imminent and read our Trends article “Why the Trumpet Watches the Rise of a German Strongman.”