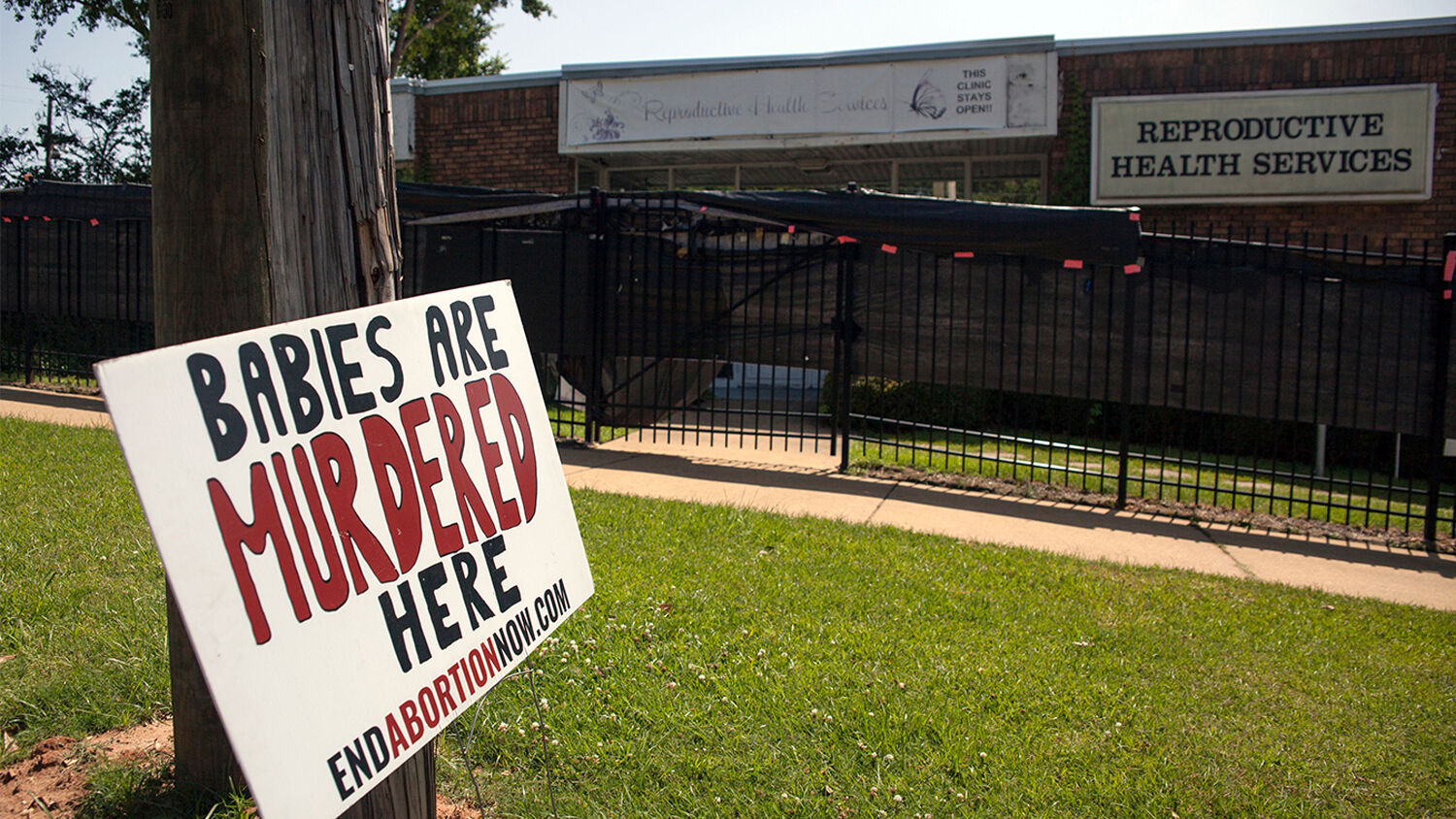 An anti-abortion sign outside the Reproductive Health Services building in Montgomery, Alabama, on May 20
SETH HERALD/AFP/Getty Images

Anti-abortion laws are passing, and it is sending the pro-abortion left into hysterics.

Abortion advocates in America have been working in recent months to liberalize abortion laws, making it easier than ever to kill the unborn. But now others, seeking to protect life, are pushing back—and pushing hard.

This issue is reaching its biggest watershed since the Supreme Court unilaterally legalized abortion nationwide 46 years ago with Roe v. Wade.

An estimated 61.3 million babies have been aborted in America since that decision, which established that a woman can abort her unborn baby up until it could survive outside the womb, around 24 to 28 weeks. State legislatures are now considering bills to make abortion legal until birth in some cases. New York passed its law on January 22. Rhode Island and Virginia have debated similar measures. This past Sunday, Illinois Democrats pushed a bill that, if passed, would be the nation’s most extreme, removing all abortion restrictions and expanding insurance coverage of abortion. Virginia Governor Ralph Northam supported a bill that would allow an “abortion” even after the baby was delivered.

Meanwhile lawmakers in other states are moving to the opposite position—not just back to Roe v. Wade’s 24-to-28-week standard, but toward complete protection of life in the womb. So far this year, Ohio, Kentucky, Utah, Arkansas, Mississippi and Georgia have passed laws making the cutoff point for legal abortions considerably earlier. Most of these allow abortions only before six or eight weeks, which is when existing technology can first detect the baby’s heartbeat—and most women do not even realize they are pregnant. Similar bills have been introduced in Louisiana, Texas and South Carolina. Two weeks ago, Alabama made performing an abortion a felony in nearly all cases. Two days later, Missouri legislators passed legislation to ban abortions at eight weeks, and the governor is expected to sign it into law by mid-July; after that, doctors who break the law will face 5 to 15 years in prison.

Supporters say this wave of laws is a direct challenge to Roe v. Wade. They want to send the issue back to the Supreme Court.

This is an extraordinary development. After seeing states pass laws that encourage abortion, you could be forgiven for thinking the whole culture was moving that direction. To hear the mainstream media, you would think everyone agrees abortion is wonderful. The strident left capitalizes on the feeling of inevitability behind their movement: Culture is always sliding toward liberalization and greater tolerance of their extreme views.

But this trend shows that many people disagree.

Anti-abortion bills are not new. North Dakota, Iowa and Oklahoma have all tried to pass bills restricting abortion and failed. What is new is that these bills aren’t getting killed—they’re becoming law. And these successes cheer the people horrified by America’s ongoing abortion holocaust.

Why are these bills now passing? Many people are pointing to a familiar name: President Donald J. Trump. He nominated Neil Gorsuch and Brett Kavanaugh to the Supreme Court, boosting hopes that Roe v. Wade may one day be overturned. The president has also appointed many conservative judges to appellate courts, increasing lawmakers’ confidence that their new laws will withstand appeals. (At the same time, this is also what has motivated liberal lawmakers in other states to pass their pro-abortion laws: to preserve abortion in case the Supreme Court reverses Roe v. Wade.)

Perhaps President Trump has also infused conservatives with some courage and will. His unapologetic combativeness with the left has helped to expose just how radical, unbalanced and nonnegotiably illogical their views are. Maybe more conservative leaders are recognizing the benefit in taking a more hard-line approach, and are doing what is right in spite of whatever attacks may come.

And those attacks are coming.

Leftists, fanatical about killing unborn babies, view dissenters as fundamentalist barbarians. Perhaps they don’t constitute a majority outside the Democratic Party, the media and academia, but even if abortionists are a minority, they are loud and proud. And anti-abortion laws have provoked a lot of hyperventilation and hysteria.

In Alabama, hundreds of angry protesters stormed the state capital. Statewide, thousands more called for the law to be repealed and the lawmakers unseated. At a large rally in Montgomery, a protest organizer said: “I think this size shows us that people are mad. And we are in the majority and that abortion rights are human rights and that’s what we want for the state of Alabama.”

“Clinicians reacted with disgust to the passage of the bill” in Missouri, Associated Press reported. During debate on the measure, abortion supporters chanted, “When you lie, people die,” and, “Women’s rights are human rights” before being escorted from the chamber. Outside, after the bill passed they shouted, “Shame! Shame! Shame!” Some women had dressed as characters from the The Handmaid’s Tale, a book and tv series which, as AP described it, “depicts a dystopian future where fertile women are forced to breed.”

Democratic Minority Leader Crystal Quade told Republicans on the Missouri House floor, “Since you’re fine with forcing children who have been raped to have their rapists’ babies, I truly hope when y’all go to sleep tonight that you think about that.” Others have taken this grotesque sentiment to a much more extreme level.

Daily Wire writer Matt Walsh, an anti-abortion advocate, praised Alabama for passing its law. After posting to social media about his stance, he received a torrent of threats from sick and unhinged leftists. They said, for example, that Walsh’s own mother should have aborted him, that he should kill himself, that they wished his wife and 5-year-old daughter would be brutally raped, and that his own daughter would get a million abortions. “You are the best reason for abortion I have ever encountered,” one said. “It is a crime that your mother failed to exercise her right …. One can only hope that by some happening that error in judgment is remedied. This is not a threat but a hope, a wish, that you, and all who think like you do, are permanently silenced.”

What evil had Matt Walsh committed? He had publicized some facts about abortion. For example: Children conceived due to rape account for less than 1 percent of abortions. More than 85 percent of abortions can be attributed to these top six reasons: 1) Not ready for a child—timing is wrong; 2) can’t afford a baby now; 3) have completed my childbearing; 4) don’t want to be a single mother/am having relationship problems; 5) don’t feel mature enough to raise a child; and 6) would interfere with education or career plans.

“You can disagree with our case, but if our ‘don’t kill people’ position sends you into a blind rage, that should tell you something about your own psychological state,” Walsh wrote. “Speaking of questionable psychological states, this week I have been inundated with hate mail from abortion supporters who are upset in general about my pro-life views, and in particular that I have the gall to suggest that the children of rape victims should not be executed for the crimes of their fathers. I have also pointed out that rapists use abortion to cover their tracks, which is a documented, self-evident, but apparently completely taboo fact.”

For the crime of pointing this out, there are people who believe Walsh and his family should be harmed and that the world will be better off when he is permanently silenced. For a segment of America today that claims “we are in the majority,” this is morally superior thinking. They feel justified for being filled with such hate!

I am 46 years old. Roe v. Wade was decided a little less than six months after I was born. So in my lifetime, this country has smiled on the deaths of 61.3 million people my age and younger who would otherwise be alive today.

That is more people than died at the hand of Mao Zedong, or of Joseph Stalin, or of Adolf Hitler. This is an unparalleled holocaust, and it is still going.

Now people are standing up and saying, Enough!

They have tried stopping it in other ways, but nothing has worked against Roe v. Wade—for 46 years! Finally, in recent months, they are starting to get some traction. And it is sending abortionists into a vicious rage.

Amid all the issues that are dividing Americans today, here comes another. This fight will grow more ferocious as these competing bills and laws make their way through states and subsequent legal challenges.

On one side are people trying to save lives. They are recognizing the basic fact that this is a life-and-death issue. On the other side are people fanatically committed to snuffing out lives for the sake of convenience, and then demonizing anyone who opposes them.

When you look at the way they are thinking, and the depths to which they will descend to defend their position, you realize there is something very dark going on.

This is what happens when people jettison absolute standards of right and wrong, and they prioritize convenience, or career, or prosperity, over human life—to the point of justifying killing a child. Taking such a stance perverts one’s thinking.

There is no other real way of understanding the wicked and violent sentiments coming from these pro-abortionists than that they have opened themselves up to an evil spiritual influence.

It may sound drastic, but they are being manipulated by the devil, who has been a murderer from the beginning! (John 8:44). He is the real instigator behind the war on marriage, the war on family, the war on humanity and human reproduction.

The Apostle Paul prophesied twice that in our age, people would become “without natural affection” (Romans 1:31; 2 Timothy 3:3). You certainly see this in the absence of natural feeling so many women have for their unborn children. They and the people influencing them and putting instruments into their bodies are killing 1 million babies a year, just in this country!

Paul also prophesied that people would be “lovers of their own selves, covetous, boasters, proud, blasphemers, disobedient to parents, unthankful, unholy, … false accusers, incontinent, fierce, despisers of those that are good … lovers of pleasures more than lovers of God” (verses 2-4). All these are painfully evident in the abortion movement.

As conservatives finally push back against abortion in a meaningful way, how radical will abortionists get? How many of their threats will they carry out? The more that people acquiesce to Satan’s influence, the uglier things will get.

And if you have wondered what the purpose of a human life is, before and after birth, this article will explain the wonderful, inspiring, stop-you-in-your-tracks purpose for which God created each human being! This is truth you need in order to understand the abortion war: “The Inspiring Truth Abortionists Should Know.”