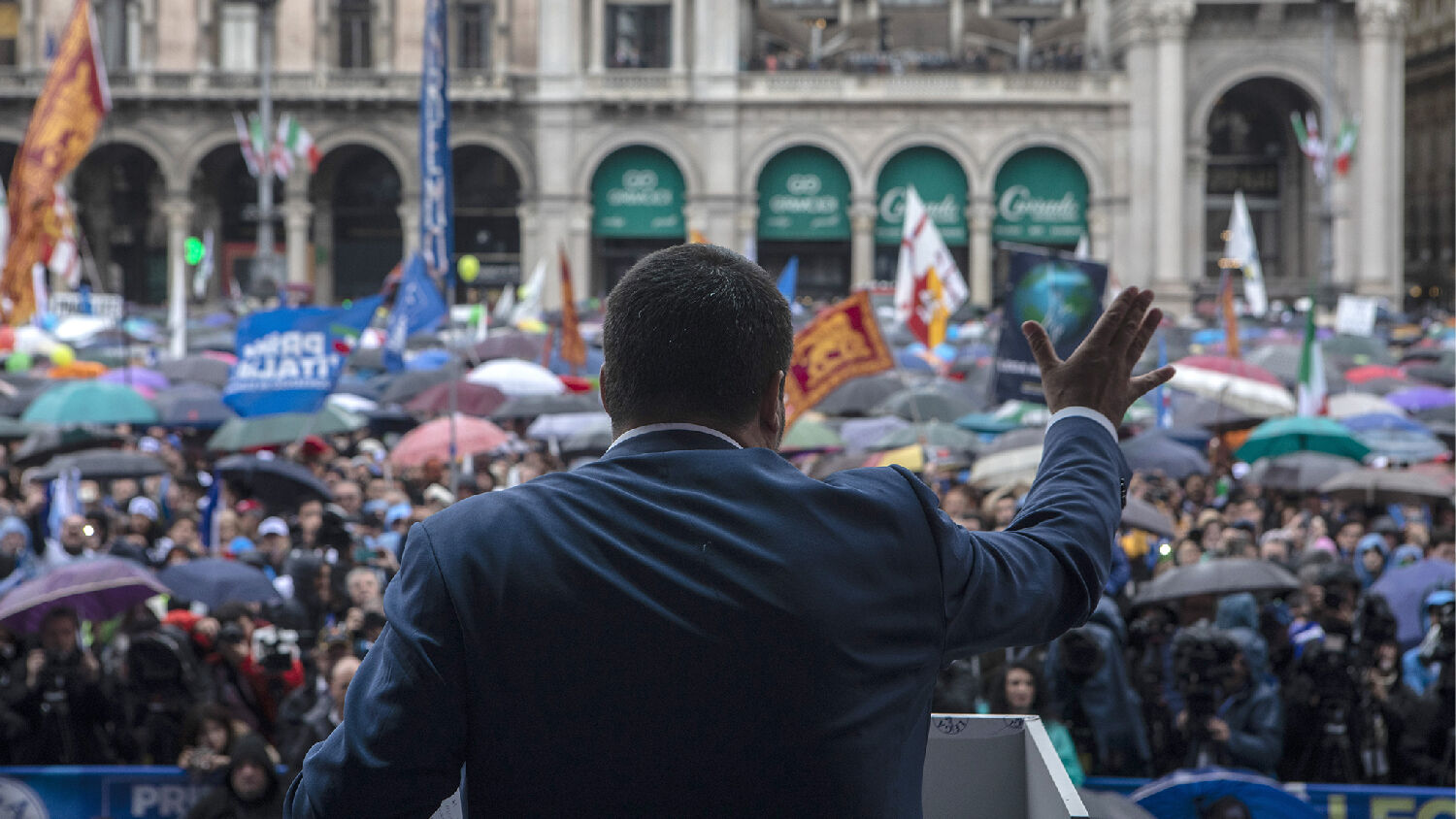 Lega leader Matteo Salvini speaks during the political rally “Towards a Common Sense Europe” at Piazza Duomo on May 18, in Milan, Italy.
Emanuele Cremaschi/Getty Images

Soccer fans lined a sidewalk in Milan on April 24, holding a massive banner reading “Honor to Benito Mussolini” and raising one arm in the fascist salute. The event took place in Piazzale Loreto, near the spot where the corpse of the fascist dictator was displayed after his execution.

This display of support for fascism, occurred the day before Liberation Day. This day commemorates the 1945 liberation of northern Italy from occupation by Nazi Germany, which had been facilitated by Italian fascist collaborators. Mussolini was assassinated shortly thereafter, on April 28.

Italy is experiencing a rise in fascist and anti-Semitic expressions in public. For decades, it has been common for hardcore soccer fans to shout anti-Semitic insults at their opponents, including calling rival fans “Jews.”

Now, support for fascism is spreading beyond fringe groups and into the mainstream, thanks largely to populist leader and Deputy Prime Minister Matteo Salvini.

The deputy prime minister has been known for making symbolic gestures and associating himself with Benito Mussolini. He has responded to criticism by repeating one of Mussolini’s most famous quotes: “Tanti nemici, tanto onore” (“So many enemies, so much honor”). At a campaign rally in Forli, Salvini chose to make a statement by speaking from the same balcony that Mussolini once spoke from. When he published a book-length interview about himself, he chose a publisher that supports fascist literature, founded by a man who openly admits to being a fascist.

Salvini spends more time actively campaigning than he does working from a desk, but he also makes statements by what he chooses not to do. For example, he skipped this year’s 74th anniversary celebration of Italy’s liberation from the Nazis on April 25.

An old-fashioned tactic has been very successful for Italy’s deputy prime minister Matteo Salvini on the campaign trail in the run up to the European elections: a grueling schedule of rallies staged up and down the country https://t.co/dFKmW2H8o9 pic.twitter.com/mnTvgYQEC2

Much less has been done in Italy than in Germany to distance the country from its fascist history. Three descendants of Mussolini, still bearing his surname, are active in politics. One of them, Caio Mussolini, is running in European elections for the Brothers of Italy party. The party has displayed large campaign posters in the colors of the Italian flag, emblazoned with the infamous dictator’s name.

This reveals a startling truth about Italian politics: “The strength of Mussolini’s rhetoric, drawing heavily on the old glory of the Roman Empire, still has not lost political currency,” wrote the Associated Press. Caio Mussolini said that the pull of Italy’s past remains strong, and “many want to write Mussolini on the ballot.”

Although the Brothers of Italy did not take the top spot in Italian elections, voters still made a definite statement by voting overwhelmingly for Salvini in European elections on May 26. Of the five other parties that received a notable share of votes, three are also right-wing. This is a clear indication of the nation’s political preferences, and more importantly, of discontent with the previous decade of leaders. Italians are frustrated and searching for alternatives.

The revival of fascism in Italy is part of Europe’s identity crisis and backlash against refugees. In “Europe’s Old Demons Return,” the Trumpet stated, “When one feels threatened, it is human nature for resentment and anger to well up. Unsurprisingly, anti-migrant rallies have become increasingly common across Europe. The number of protesters at these rallies is increasing too, and many rallies have a solid contingent of Nazis.”

This is true of Italian politics today. The country has not dealt with its fascist past, and after years of disappointment from corrupt politicians, more people are becoming attracted to right-wing and even fascist ideology to solve Italy’s identity crisis.

This is also true of Europe as a whole. Many Europeans are looking for a leader to bring them through the immigration crisis and prevent radical Islam from permanently changing their nations. This leader will indeed come. But how will he come, and from where?

The Trumpet watches this trend closely, because Bible prophecy describes this search for leadership. It gives sure answers, which shed light on what kind of man will soon lead Europe.

Daniel 8:23 describes this leader. It shows that he is to appear in “the latter time,” the time right before Jesus Christ’s return—the time we are living in today. The wider context shows that this “king of fierce countenance” leads “the king of the north” (Daniel 11:40), which corresponds to modern Europe led by Germany.

“As Europe’s old demons return, and the basic urges of self-preservation and nationalism once again take hold, Germans will increasingly look for a leader and political party willing and able to lead Germany (and even Europe) through this transformation” (ibid).

This search for leadership is being manifested by populism in many European nations. Italy is a prime example. But even though Italy is greatly impacted by the incoming migrants, your Bible says that this coming leader will be German.

In his booklet on this subject, A Strong German Leader Is Imminent, Trumpet editor in chief Gerald Flurry writes:

Yet if you look at the whole vision, it is tied to the return of Jesus Christ to this Earth. That may be hard for some people to believe, but it is clearly prophesied in your Bible! It is actually mentioned in about a hundred biblical prophecies.

This strong leader will temporarily unite Europe. However, his power will not last long. When Christ returns, this strong leader of Europe “shall also stand up against the Prince of princes; but he shall be broken without hand” (Daniel 8:25). At His return, the all-powerful Christ will put an end to human misrule on Earth and establish His Kingdom, finally bringing the peace that has eluded mankind for so long.

To read more about how Europe’s identity crisis is transforming its politics, and why this will change the lives of both Europeans and non-Europeans alike, request a free copy of A Strong German Leader Is Imminent, by Gerald Flurry.