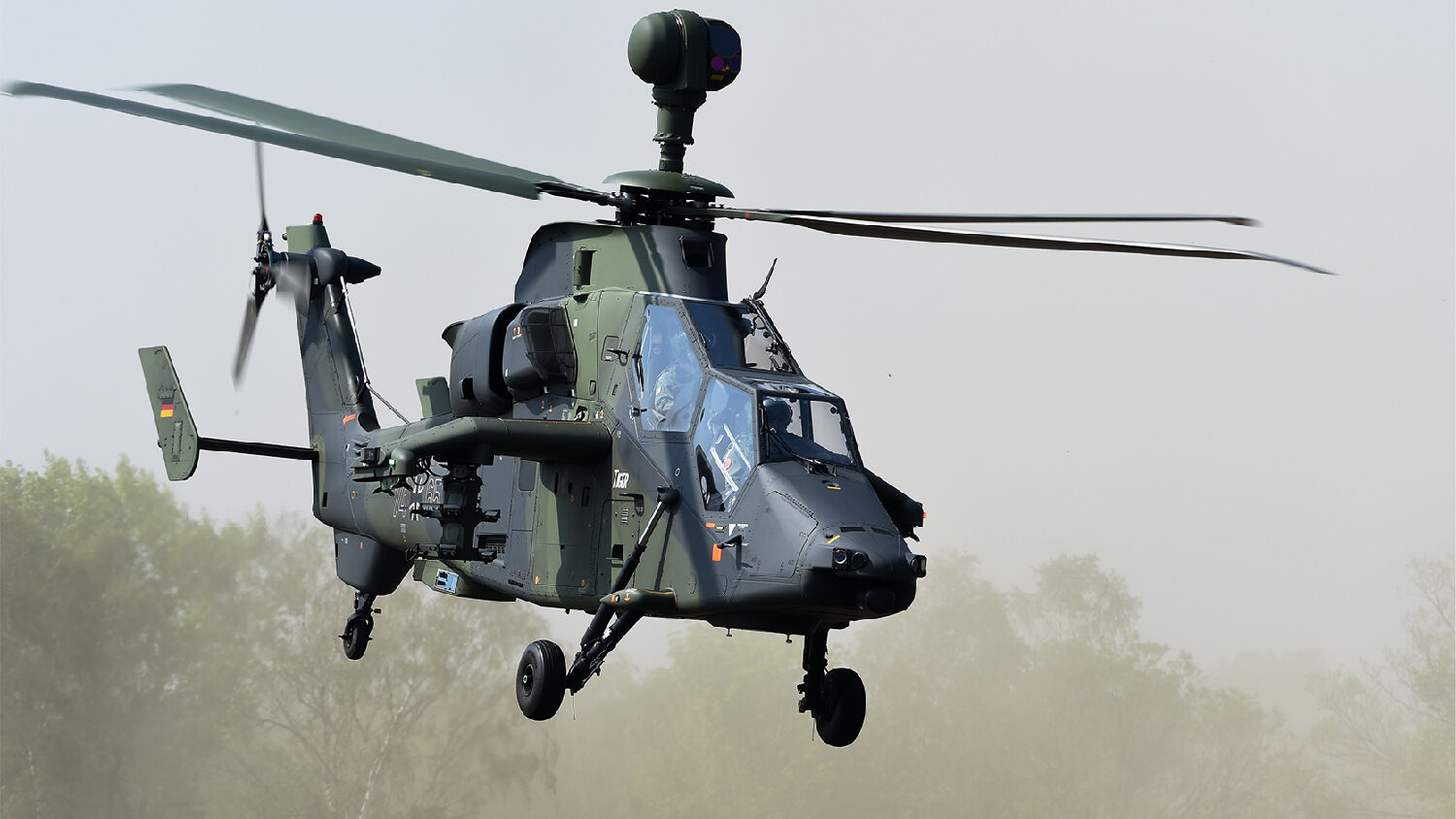 A Tiger helicopter of the German Bundeswehr practices with the Very High Readiness Joint Task Force as part of the nato tank unit at the military training area in Munster, Germany, on May 20.
PATRIK STOLLARZ/AFP/Getty Images

The world wants more German leadership, and it is about to get it.

Germany informed nato on May 17 that it will raise its military spending by €5 billion (us$5.6 billion) this year. This is the largest defense spending increase Germany has made since the end of the Cold War, and comes as Germany has been pressured to contribute more to nato and world security.

After raising its defense spending, Germany will be spending 1.35 percent of its gross domestic product on its military. This is still short of the 2 percent minimum required by nato; however, the defense alliance and its principal member, the United States, welcome it as a step in the right direction. Currently, only 7 of 29 nato countries meet their minimum defense spending requirement.

The 1.35 percent of gdp figure equates to about €47.2 billion ($52.8 billion) per year. This means that Germany will now spend more on its military than any time since it reunified after the Cold War.

Germany also announced that it intends to increase military spending next year, raising it to 1.38 percent of gdp. The last time Germany spent this percentage of its economy on its military was in 2009.

Defense Minister Ursula von der Leyen has called for more spending, saying that the military needs an increase of at least €12 billion ($13.4 billion) to prevent major German and joint-European defense projects from collapsing.

#NATO has just released its Annual Report for 2018. Out of 29 member states only the #US, #Greece, the #UK, #Estonia, #Poland, #Latvia and #Lithuania have reached the agreed guideline of spending 2% of GDP on defense: https://t.co/W2ND9ZbBhS pic.twitter.com/sf0uy8zbOZ

Germany’s low military spending compared to its strong economy—especially as world conditions grow more unstable—has motivated the United States and other nations to ask it to shoulder more of the global security burden. Bloomberg recently called for Germany to expand its influence into Africa, where it once had colonies, in order to counteract Chinese expansion.

So far, Germany’s leadership has been slow to deploy its military or even expand its military capability. However, that will soon change.

We are now living through the final resurrection of the Holy Roman Empire. It will soon return to power, led by an economically, politically and militarily dominant Germany. The Trumpet has watched this German resurgence since it began, as our predecessor, the Plain Truth, did for decades prior. In his 2014 article “Germany’s Urgent and Dangerous Military Decision,” Trumpet editor in chief Gerald Flurry wrote:

In 1957, when Germany was a pile of rubble, [Herbert W.] Armstrong said, “Germany is going to rise again with great power.” He said the same thing in 1970. In 1980, Mr. Armstrong wrote, “I have been forecasting this revived Roman Empire publicly since February 1934. Now, it may go together suddenly, rapidly.” It is doing just that today! In 1983, he said, “The Bible prophesies of this coming United States of Europe, a new united superpower, perhaps more powerful than either the Soviet Union or the United States.” He went on to say that we don’t realize the thoroughness of the Germans, and that they are going to carry through what they started in World Wars i and ii in another world war—World War iii.

The Holy Roman Empire will revive one last time (Revelation 17:10). It will be led by someone who is radically more aggressive and powerful than German Chancellor Angela Merkel and the current administration. Your Bible, which predicted Germany’s rise, also predicted that strong leader’s appearance. Mr. Flurry explained this in the same 2014 article:

Here is another prophecy we need to watch in light of what is happening in Germany and Europe today: “And in the latter time of their kingdom, when the transgressors are come to the full, a king of fierce countenance, and understanding dark sentences, shall stand up” (Daniel 8:23). The book of Daniel is prophecy for the end time (Daniel 12:4, 9). This is talking about the fact that sometime soon, this European empire will be led by a strongman—as it has been so many times in the past.

This man is also described in Daniel 11:21: “And in his estate shall stand up a vile person, to whom they shall not give the honour of the kingdom: but he shall come in peaceably, and obtain the kingdom by flatteries”—in other words, it strongly indicates that this “vile person” will not be voted in. Watch Europe for this strongman! He is about to come on the scene.

Watch as these prophesied events move closer to fulfillment. When this is fulfilled, it will radically change the world you live in, bringing intense suffering and destruction to the world. But this devastating power will not last long; Jesus Christ will come back to put an end to the violence, forever (Daniel 2:44). To read more about the future of Germany and Europe, and how it will change the world around you, request our free book The Holy Roman Empire in Prophecy.