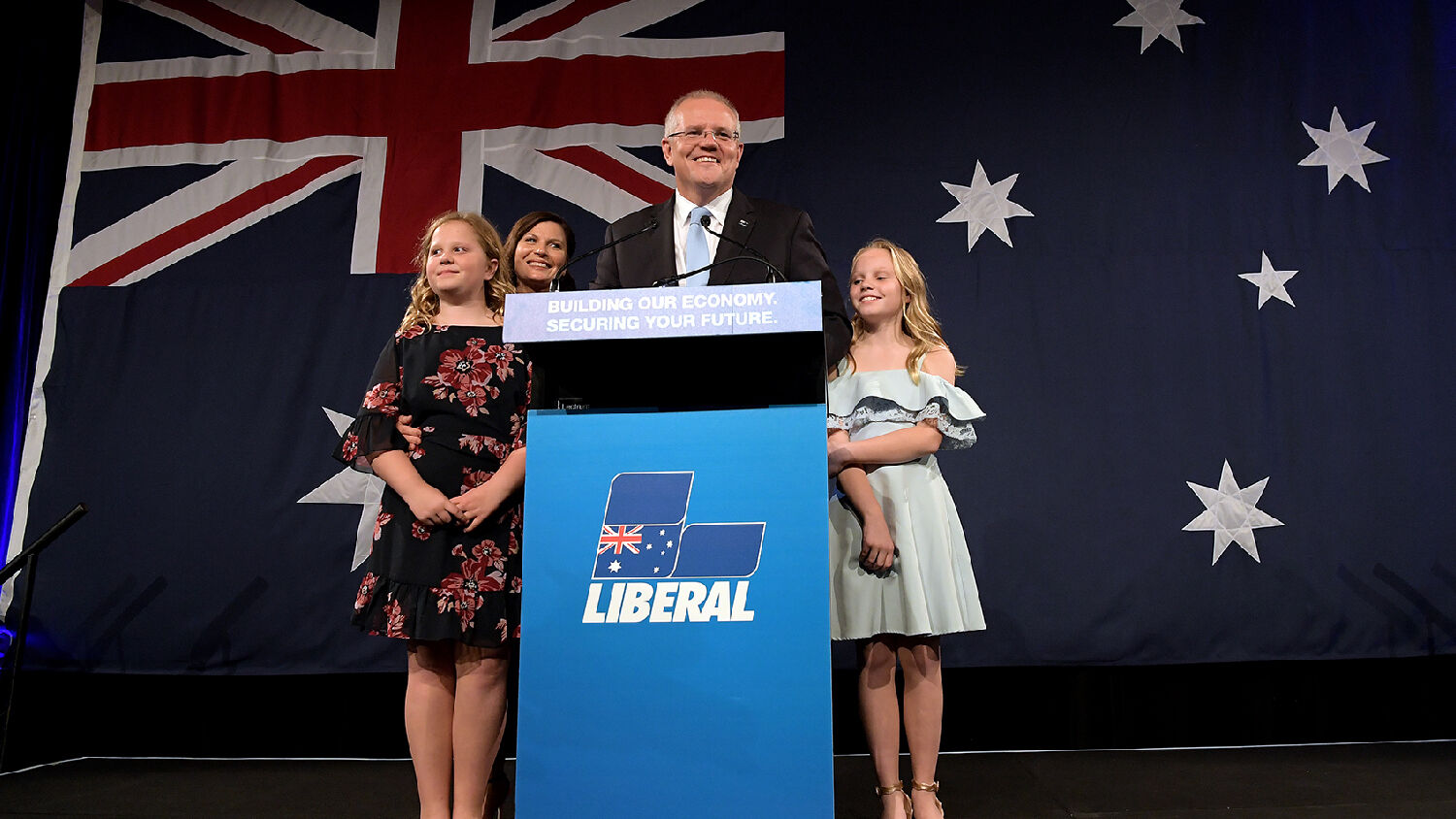 Australian Prime Minister and leader of the Liberal Party Scott Morrison—flanked by his wife, Jenny, and daughters, Lily and Abbey—delivers his victory speech at the Sofitel Sydney Wentworth on May 18 in Sydney, Australia.
Getty Images

The Australian Liberal-National coalition won the May 18 federal elections, defying opinion polls and clearing the way for Prime Minister Scott Morrison to remain in office. The coalition currently has 77 seats, enough to form a majority, and is predicted to come away with more once counting is finished.

For the majority of analysts, who had predicted a win by the Labour Party, these elections were a disappointment and, in many cases, a shock. Leading up to the elections, every single one of 56 news polls since 2016 predicted that Labour, headed by Bill Shorten, would emerge victorious.

Every last one of those polls was wrong.

Gone is the Washington Post’s “counternarrative to the rise of nationalists and conservative groups” and their assertion that Labour would “handily defeat the Liberal-National party coalition that has governed the country for 5½ tumultuous years.”

American President Donald Trump called Mr. Morrison on the day of his victory and congratulated him, comparing it to his own election in 2016. Many other observers have drawn a comparison between Mr. Morrison’s unexpected victory and Brexit, or compared it to the 2016 election of President Trump. In all three cases, the polls utterly failed to accurately gauge reality.

Now, as pollsters scramble for answers in an attempt to save face, one must ask how so many major polling agencies, over so many consecutive months, could have made so many errors.

How did pollsters get the Australian election result so wrong? https://t.co/g322pbNydZ pic.twitter.com/cVhYO9v3Lc

The media remains reluctant to admit they were wrong, running headlines that try to pass off Morrison’s victory as a last-minute miracle turnaround. Some take up the popular (and unsupported) narrative that the uneducated are less likely to respond to polls, and therefore Mr. Morrison’s supporters, who are broadly categorized as less educated, are less likely to impact the polling results. The one source contradicting the polls was research done on social media posts, which predicted a coalition win. But that was not mentioned in the media.

Are these explanations correct? Or do the polls show that—especially when it comes to politically polarizing subjects—our society has a dangerous aversion to facing the truth? Election analyst Kevin Bonham commented on the polling failure to sbs News:

[O]ne poll can be 3 percent out and that’s what you would sort of expect now and then by random chance. But all the polls being out by that amount in the same direction and getting all the same results is something that absolutely cannot happen by random chance. … It’s absolutely proof of a systematic issue. … If they are doing true random sampling independent of each other, there is no way that they would all get results so close to each other at the same time.

Bonham suggested that due to all the poll results being skewed by the same amount, it is likely that polling companies altered their findings to avoid producing results that differed too much from their competitors. Newspoll, YouGov, Ipsos and ReachTEL conducted the opinion polls.

Theories abound for the surprise outcome, and there will only be more as time goes on. Regardless, the end result is that Australians voted against massive spending on climate change.

The American Spectator applied this lesson to U.S. politics, writing that American Democrats “don’t understand that, given a choice between expensive utopian schemes and creating an economy that will permit them to provide for their families, most people (including Aussies) will vote for the latter.” If Democrats refuse to learn this lesson, concluded the Spectator, “they will regret it next year on Election Day.”

Poll manipulation points to a common problem in Australian and American society, politics and media: infiltration by the radical left. Trumpet executive editor Stephen Flurry discussed the polling failure and its real causes in his May 20 Trumpet Daily Radio Show episode. Comparing the failure to the 2016 U.S. elections, he said, “We’ve seen this play out before. … They’re so far to the left—the commentators, the pollsters—[that] they … draw up the question the way that it will ensure the result they want.”

However, just as in America, it appears that the radical left has been slowed down temporarily. This is not only about a polling failure; it points to God’s miraculous intervention. “There is a clear change of direction,” said Mr. Flurry. “God is behind it, particularly for the United States. But I think you see it also for Britain, and now Australia as well.”

Trumpet editor in chief Gerald Flurry wrote in depth about this change of direction in his article “Saving America From the Radical Left—Temporarily.” Discussing American politics and how the rise of President Trump has slowed down the radical left, he wrote, “[W]hen you compare what this president is doing to what his predecessor did, there has been a clear change in direction.” He went on to explain how this change in direction “will slow the speed at which America is being pulled apart.”

This change in direction is now impacting Australian politics. However, as with America, it is only temporary. To find out how you can be spared during the coming collapse of these nations, read “Saving America From the Radical Left—Temporarily.”