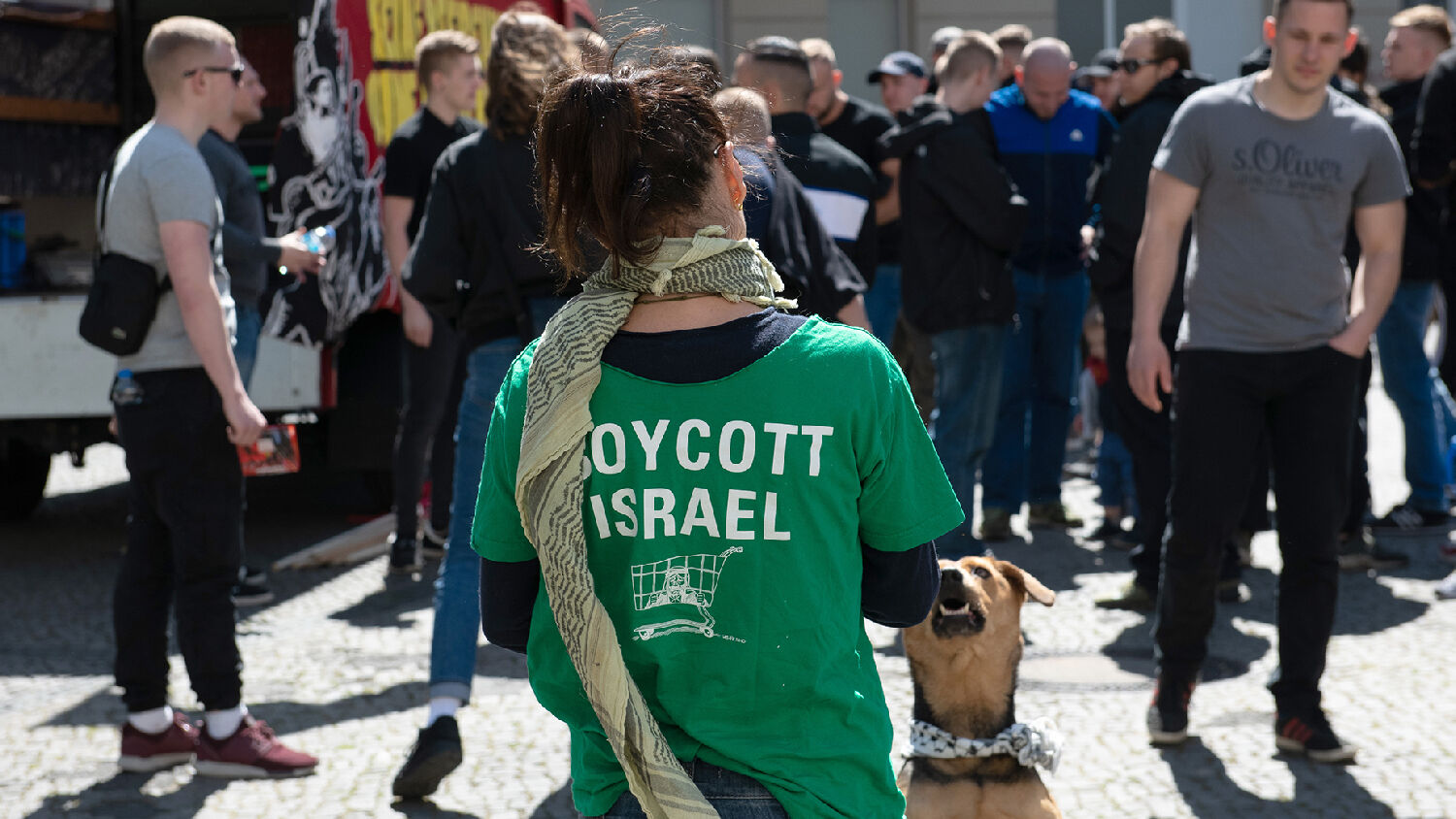 A protester wears a T-shirt reading “Boycott Israel” at the Karl-Marx Platz in the district of Neukoelln.
Getty Images

Israelis are thankful for condemnation of bds movement, but they should still be wary.

On May 17, Germany’s parliament passed a non-binding motion on “resting the bds movement.” bds stands for Boycott, Divestment and Sanctions, an international movement targeting the State of Israel. This decision seems to stand with the Israeli government, but beneath the surface, something else is boiling. Bible prophecy foretells that Germany will double-cross Israel.

Since Germany joined the United Nations Security Council as a non-permanent member in January, the German government has presented itself as pro-Israel. On the 70th anniversary of the admission of Israel into the UN, German Foreign Minister Heiko Mass lamented the “one-sided treatment and exclusion” of the Jewish state in UN committees. Maas concluded that Israel’s security should be questioned “nowhere and by no one.”

The UN is known for its anti-Israeli bias. Germany’s Bild.de noted that in 2017, 78 percent of all country-specific resolutions were directed against Israel. But as Bild.de also pointed out: “Despite the great announcements by Maas to stand by Israel’s side, Germany has repeatedly supported past resolutions that have been initiated by Israel’s enemies” (Trumpet translation throughout).

FM @HeikoMaas on 70th anniversary of Israel’s admission to the UN: We would like to reiterate once again today that Germany stands, also in the UN, shoulder to shoulder with Israel, whose security and right to exist must never be called into question by anyone anywhere. pic.twitter.com/2E9Fcls97q

Yair Netanyahu wrote to Maas on Twitter: “It will be nice if you stop interfering in our internal business and stop funding hundreds of radical left-wing ngos in Israel that seek its destruction. Use the hundreds of millions of € you use for this to fund hospitals, schools and churches in Germany!” Yair Netanyahu is the son of Israeli Prime Minister Benjamin Netanyahu. He holds no political office but is known for controversial statements on social media. Bild.de commented:

The fact is that funds from the EU and Germany are being used by organizations that not only criticize Israel, but also defame the Jewish state, and which are close to the anti-Semitic boycott campaign (bds) or even partially support terrorist propaganda.

According to a report by the Israeli Ministry of Strategic Affairs, the EU pays millions of euros annually to demonstrably anti-Israel organizations. The independent Mideast Freedom Forum has recently criticized EU funds being poured into pots from which the Palestinian Authority pays pensions to terrorists.

The bds movement demands that Israel withdraw from the West Bank, the Golan Heights and East Jerusalem, and it calls for the “right of return,” by which Palestinian refugees and their descendants in other countries could emigrate to Israeli territory. For years, many European nations, including Germany, have supported these demands.

Many claim that the bds movement targets the Jewish state but not Jews. They emphasize that it bases its demands on UN resolutions. But as n-TV.de noted: “The implementation of UN Resolution 194, the third core requirement [of the bds], would de facto equate to the annihilation of the Jewish state. The right of return described therein was formulated 70 years ago—at that time for just under 700,000 Palestinians. Today there are more than 5 million.”

After Yair Netanyahu’s criticism, Germany’s parliament passed a motion calling for the German government to stop its support for the bds, identifying the movement as anti-Semitic. The resolution reads:

The arguments and methods of the bds movement are anti-Semitic. The campaign calls for a boycott of Israeli artists as well as stickers on Israeli merchandise that deter their purchase, which is reminiscent of the most terrible phase of German history. “Do Not Buy” stickers of the bds movement on Israeli products awaken associations to the Nazi slogan “Kauft nicht bei Juden!” (“Do not buy from Jews!”) and corresponding graffiti on facades and shop windows.

The German Bundestag condemns and resolutely opposes all anti-Semitic statements and abuses that are formulated as alleged criticisms of the State of Israel’s policies, but are in fact expressions of hatred of Jewish people and their religion.

Many in Israel’s government have celebrated the German parliament’s decision. The Israeli Foreign Ministry said, “We welcome the Bundestag resolution, adopted by a large majority, against bds. The German parliament recognized the anti-Semitic nature of bds and its illegitimate boycott activities. This is an important step, which we hope will be adopted by other European legislative bodies.”

But does this mean that Germany truly stands with Israel? One resolution does not undo years of opposition. And it does not undo anti-Semitism that exists among Germans.

A recent report published by Germany’s Interior Ministry revealed that anti-Semitic offenses increased by 19.6 percent to 1,799 in 2018 compared to 2017. The report also claimed that the German people respond like a “sounding board for conflicts around the world.” This means that the more Israel as a nation is accused of being the main reason for the conflicts in the Middle East, the more Jews are attacked in Germany.

Bible prophecy reveals that Germany’s “love” for Israel is deceitful. In the end, it will lead to one of the most devastating betrayals in history. Trumpet editor in chief Gerald Flurry writes in Hosea—Reaping the Whirlwind:

It seems the Israelis can trust their worst historical enemy, but they can’t trust God to protect them! And God is their only source of help.

Still, Israel continues to be “lovers” with the Germans. Soon it will go to the Germans in far greater desperation. This will lead to its destruction. It is not the Arabs who are going to destroy it. The friendship between Germany and the biblical nations of Israel is going to lead to one of the biggest double-crosses in human history!

While Germany represents itself as standing “shoulder to shoulder” with Israel, as Mass claimed, it will actually betray the Jewish state and the Jewish people.

Daniel 11:40-45 reveal that the Germans will go so far as to attack Iran, Israel’s chief enemy, but afterward, it will betray Israel and turn against it.

Today, Germany is cozying up to Israel, which fulfills part of the prophecy. And warning signs of this double cross are detectable, beneath the surface. In Isaiah 10:5, God says Germany is the rod of His anger. Due to the sins of the Jewish people and other descendants of ancient Israel (which includes America, Britain and other English-speaking nations), God will punishment them. This will ultimately lead to their repentance, turning them back to God to receive His blessings. To learn more about this beautiful outcome, request a free copy of Ezekiel: The End-Time Prophet, by Gerald Flurry.