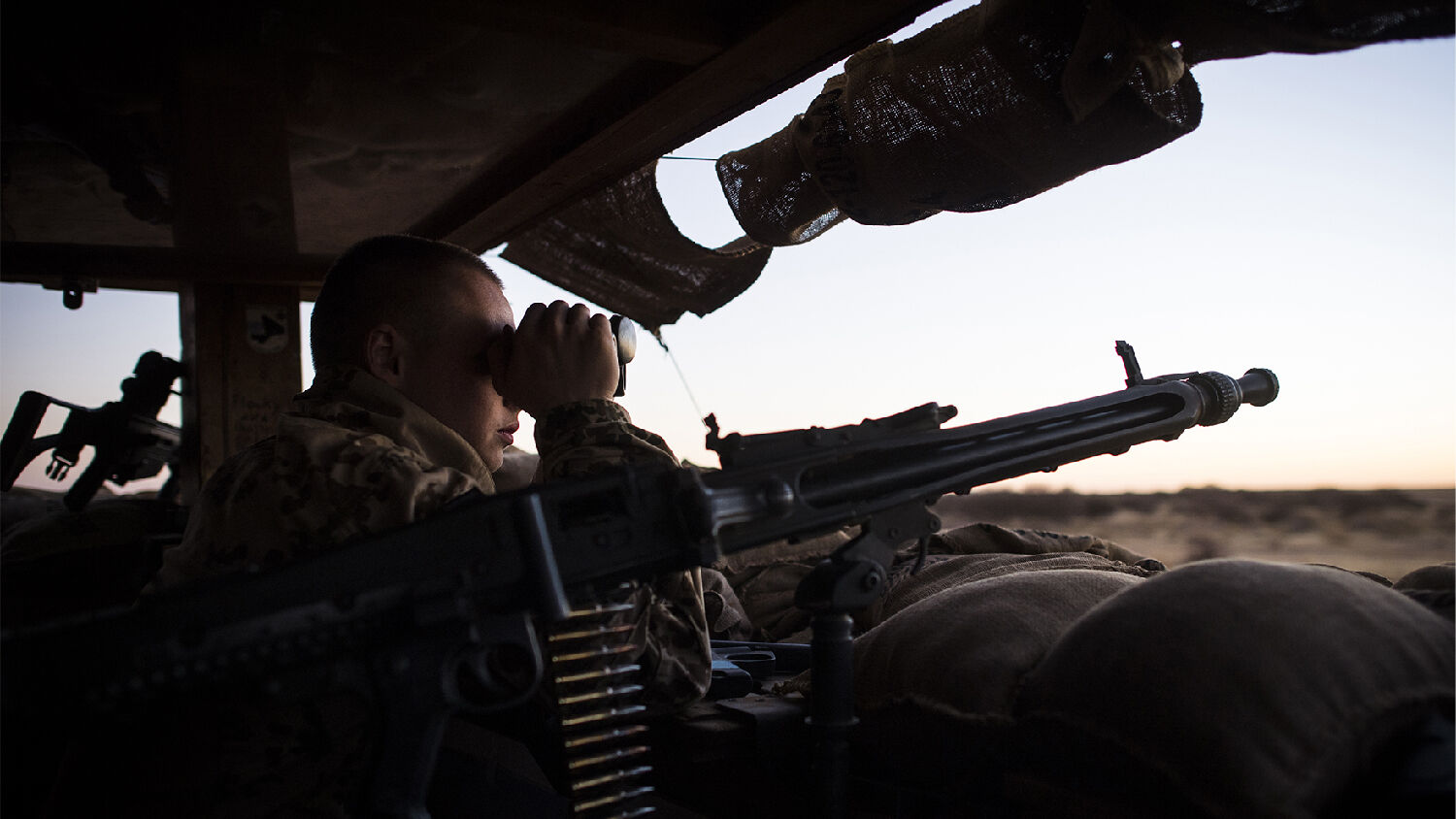 A soldier of the Bundeswehr, the German armed forces, stands guard at Camp Castor in Gao, Mali.
Getty Images

Containing radical Islam in the Sahel and Somalia is preparation for confronting Iran.

Germany’s Bundestag, the lower house of parliament, voted on May 9 by a great majority to continue the deployment of German soldiers in Mali and Somalia to May 2020.

Germany supports two missions in Mali, one led by the United Nations and the other by the European Union. A total of 1,030 German troops are involved there. The Somalian deployment is an EU mission apart from the UN. There are 80 German military personnel there.

The UN mission in Mali is primarily intended to combat instability by training local government forces in counterterrorism tactics so they can protect themselves from jihadist fighters attempting to overthrow the government. Of the 1,030 German troops in Mali, 840 are devoted to this UN mission. Since the German Army became involved in Mali in 2013 as part of a UN peacekeeping mission, more than 150 UN troops have died.

The German government has called Mali’s security “fragile” and sees the training of government soldiers as imperative for the stability of the country. Much of the country is still outside of government control, and despite being driven out of urban areas by European and UN soldiers, the Islamic militants have thrived in rural areas.

Europe is increasingly taking note of the situation in Africa’s Sahel region, as “unprecedented” levels of jihadist attacks have transpired there recently, according to the UN. This week, EU diplomats held talks with their counterparts from the region.

“The mission is taking place in this region because Mali is at the heart of the Sahel zone,” the German federal government stated in a press release. “It is a hinge that joins North, Central and West Africa, which means that it plays a key role in the stability and development of the entire Sahel region.” The press release acknowledged a vital geopolitical reality: Instability in African nations directly impacts Europe.

Somalia and Mali are major hubs for human trafficking and smuggling, troubles which affect not only these African nations, but the entirety of North Africa, and even Europe. Migrants pass through these countries on their way to Europe.

The German government acknowledged that, so far, progress in the region is quite limited, and left to itself, Mali’s limited government security forces would probably be unable to control the country in any meaningful way.

EU nations have trained local Somalian government forces as well, but have more recently stepped back from that role to focus on fighting piracy. The extended mandate for Somalia allows Germany to continue supporting Operation Atalanta by contributing personnel to the EU’s anti-piracy force, EU navfor Somalia, which patrols off the Horn of Africa, in the Gulf of Aden, the Arabian Sea and part of the Indian Ocean.

In Somalia, the EU’s top priority is keeping radical Islam at bay and pirates out of the strategic Gulf of Aden and Bab el-Mandeb strait. This seaway, which leads to the Suez Canal, is the most direct path for cargo, oil and gas being shipped to and from EU countries. If blocked, ships would be forced to sail thousands of additional miles to navigate around almost the entire continent of Africa. The Bab el-Mandeb is an especially important choke point for oil, according to the U.S. Energy Information Administration. In 2016, 2.8 million barrels of oil passed through this choke point northward bound for Europe each day, and 2 million barrels passed southward. In terms of volume of oil, it is the third-largest choke point in the world after the Strait of Hormuz and the Strait of Malacca.

What do Somalia and Mali, two nations on opposite sides of northern Africa, have in common? Instability in either one threatens the security of a strategic waterway.

Mali may be landlocked. But what goes on here has a huge influence on its Mediterranean neighbours. Unrest and terrorism in Mali can quickly spread to the rest of the region.

Many analysts see that it is in Europe’s interest to stop radical Islam from destabilizing North African nations. However, none take advantage of one vital information source, which shows where German troop deployments in Africa are leading. What is this source? It is at the heart of why the Trumpet watches Germany’s rearmament and increasing willingness to deploy troops abroad, and why we watch radical Islam’s increasing belligerence. That oft-neglected, yet vital source of information is Bible prophecy.

Bible prophecy predicts that modern Germany will surround what Scripture calls “the king of the south” (radical Islam, led by Iran). (Request your free copy of The King of the South, by Trumpet editor in chief Gerald Flurry, for more information.)

This describes what we are seeing today: Germany is placing small numbers of its forces strategically around vital choke points and “hinge” locations in order to contain radical Islam. Soon, though, Germany will go beyond mere containment and begin to actively attack radical Islam. Mr. Flurry explains this prophesied strategy in his booklet Germany’s Secret Strategy to Destroy Iran:

How, exactly, has the king of the north surrounded the king of the south? Its troops haven’t encircled Tehran. It doesn’t have bases and aircraft carriers dotting Iran’s borders. But it has made some very intelligent, very strategic deployments and deals that give it a presence all the way around Iran’s sphere of influence.

Look at the map—Iran and its allies are in the middle of a deadly circle!

Remember, Daniel 11:40 is a prophecy for “the time of the end.” In Daniel 12, verses 4 and 9 both specify that God sealed this amazing prophecy to be opened only for “the time of the end.” How incredible that we are seeing it being fulfilled right now! This whirlwind strategy is about to explode into all-out war. In fact, it will spark World War iii! But there is good news. The same Bible that prophesied this specific strategy with this powerful whirlwind also prophesies in detail that World War iii will end with the glorious return of our Savior, Jesus Christ!

When Germany and Iran clash, it will radically alter the world you live in. There will be a time of immense suffering, just as the Bible predicts. But there will also follow, shortly after, the return of Jesus Christ, to bring an end to war, forever. If you would like to learn more about the detailed prophecies describing how Germany’s clash with radical Islam will unfold, request your free copies of our booklets Germany’s Secret Strategy to Destroy Iran and The King of the South, by Gerald Flurry.