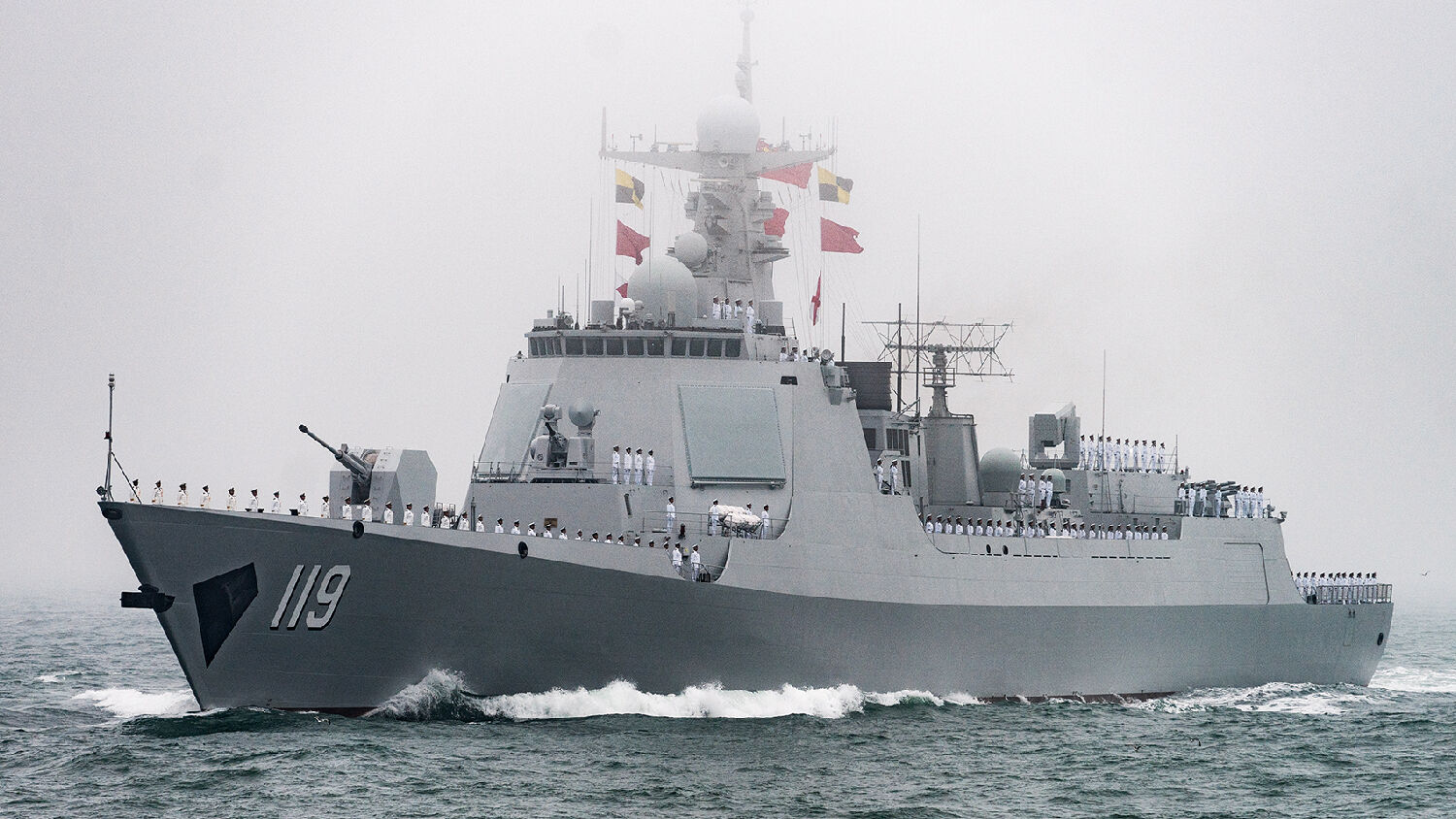 The Guiyang destroyer of the Project 052D takes part in a military parade marking the 70th anniversary of the Chinese Navy.
Getty Images

The United States Department of Defense released its annual report on the Chinese military on May 2, emphasizing the transformation of China’s People’s Liberation Army (pla) Navy into “a global force.” The report reveals decisive steps forward in China’s naval power, its plan to control two oceans, and its successful deployment of credible sea-based nuclear forces.

Analysts say China’s submarine fleet now possesses the ability to launch a retaliatory nuclear attack in the event of a nuclear attack on the Chinese mainland. As stated in the report, China currently has four operational Jin-class submarines that can launch ballistic missiles, representing “China’s first credible, sea-based nuclear deterrent.” The U.S. military has closely monitored China’s use of Hainan Island over successive years, and reports that it is equipped with extensive facilities for Jin-class ballistic-missile submarines. Submarine activity there has sharply increased in recent months.

The report shows that China has been focusing on expanding its sea power in several key regions: the South China Sea, the East China Sea and, increasingly, the Indian and Arctic oceans.

The vast majority of China’s exports to Europe pass through the Indian Ocean, as do vital energy imports from the Middle East. As a result, Geopolitical Futures wrote, “Chinese naval doctrine now calls for a permanent carrier presence in the Indian Ocean.”

China is also developing intermediate-range anti-ship missiles. It has already tested and deployed the DF-26, a precision-strike anti-ship missile, which can carry conventional or nuclear payloads. With a range of over 3,500 miles, it is designed to discourage the U.S. Navy from sending its own aircraft carriers into conflict zones.

China is already working on the next generation of its carrier fleet, modernizing its attack submarines, and preparing to build a new fleet of nuclear-powered ballistic-missile submarines. Chinese carriers still lag behind the U.S. Navy in terms of technology. They are not nuclear-powered and lack modern equipment to launch and recover aircraft, resulting in greater wear on each plane and fewer missions flown. Training is also a limiting factor: The first group of naval aviators trained fully in China graduated only in 2015, and China has operated carriers only since 2011, when it acquired a second-hand vessel from Ukraine.

Since then, China has built one carrier of its own, planned to officially enter service this year. Another one appears to be in the early stages of construction and is expected to further narrow the technology gap with the U.S. These carriers are increasingly necessary to secure China’s immediate region of interest. Although not yet up to the standard of global force projection that the U.S. has, and limited by inexperienced crews, they are adequate for China’s current operations and are rapidly improving. Chinese experts have called for at least six carriers to be developed to protect strategic regions such as the South and East China seas and as far out as the Indian Ocean.

China has also shown increasing interest in the Arctic. According to the report, China operates research outposts in Norway and Iceland. In 2017, the Chinese icebreaker Xuelong became the first official Chinese vessel to traverse the Northwest Passage. China has since built a second icebreaker, the only one in the world that can break through ice while sailing backward. It has also attempted to expand into Greenland: A plan to buy an abandoned naval base in Greenland prompted complaints from Denmark; the Department of Defense report also cited evidence showing China wants to build satellite facilities in Greenland. Currently, the only other major power active in the Arctic is Russia.

China is also enhancing its coast guard. “This year’s report placed heavier emphasis than past years’ on China’s use of its coast guard and so-called ‘maritime militia’ in gray zone operations in the South and East China seas,” wrote Geopolitical Futures. The tactic of swarming contested islands with Chinese Coast Guard vessels and fishing boats has prompted the U.S. to warn China that these armed vessels will soon be treated as combatants. China has pursued a strategy of making numerous aggressive but unarmed provocations, all of which “fall below the threshold of provoking armed conflict,” said the report.

What is China’s strategy? Why the extensive focus on islands in the South China Sea and gaining control of the oceans around China and beyond?

In a time of war with another major power like the U.S. or Europe, China will need to bring its ships out far enough from the mainland to attack its enemies. This means passing through the South and East China seas and having a secure zone from which to launch strikes. To do this, China is focusing on dominating and controlling strategic choke points. Whoever controls these points holds the keys granting access to the broader Pacific Ocean, where China can hide its nuclear ballistic-missile submarines.

These choke points are mentioned in Bible prophecies written thousands of years ago. And China’s control of them is prophesied to have grave effects for the U.S. and Britain. In his article “China Is Steering the World Toward War,” Trumpet editor in chief Gerald Flurry wrote:

This warning is not just for an ancient nation. It is a prophecy for the modern-day descendants of Israel! Two nations in particular represent Israel in this end time: America and Britain.

Although many analysts watch China closely today, none could have predicted China’s meteoric rise as far back as one man did. His name was Herbert W. Armstrong, the founder and editor of the Plain Truth newsmagazine. In December 1959, he wrote:

Lenin wrote that the way to Paris, London and New York is via [Beijing] and Delhi. [P]art of the Communist plan [is] to place India and Pakistan in a giant vice between Russia and China. … Red China insists it has a legal right not only to Tibet but [also] to many parts of India and Southeast Asia. … Their constant dream for centuries has been ultimate world conquest! … China knows, however, that in this highly industrialized age she can accomplish this dream only as an ally of Russia. … China is now ready to begin devouring the rest of Asia with Russia’s secret military backing.

Mr. Armstrong predicted China’s rise, based on prophecies in Ezekiel 38. In combination with other Asian nations, this superpower will be involved in crucial end-time events, eventually helping to field an army of 200 million men (Revelation 9:16). China’s increasing sea power is only one example pointing to their prophesied militarization.

In “Why the Trumpet Watches the Rise of China as a Superpower,” we wrote:

It is amazing to see how God’s prophecies about China for our day coincide with China’s recent activity. God gave China its unique geography and influenced world events enough to ensure they would unfold according to His prophecies. Now this Asian giant is coming out of its isolationist ways. It has gained tremendous economic clout that poses a considerable threat to the United States. Its capability as a military power is also rising to levels commensurate with those foretold in Scripture.

But that doesn’t get to the heart of why the Trumpet reports on China’s rise. We follow this trend because of what will happen after the siege. All of these major events prophesied in the Bible are part of a series of events that lead right up to the return of Jesus Christ.

China is a nation you must watch if you want to understand the world around you. China’s rise as a superpower already impacts the world, and will continue to do so as more prophecies are fulfilled. Though it means war in the short term, it ultimately will lead to the best news you could ever hear: the return of Jesus Christ. To read more about China’s rise, request your free copy of our booklet Russia and China in Prophecy.