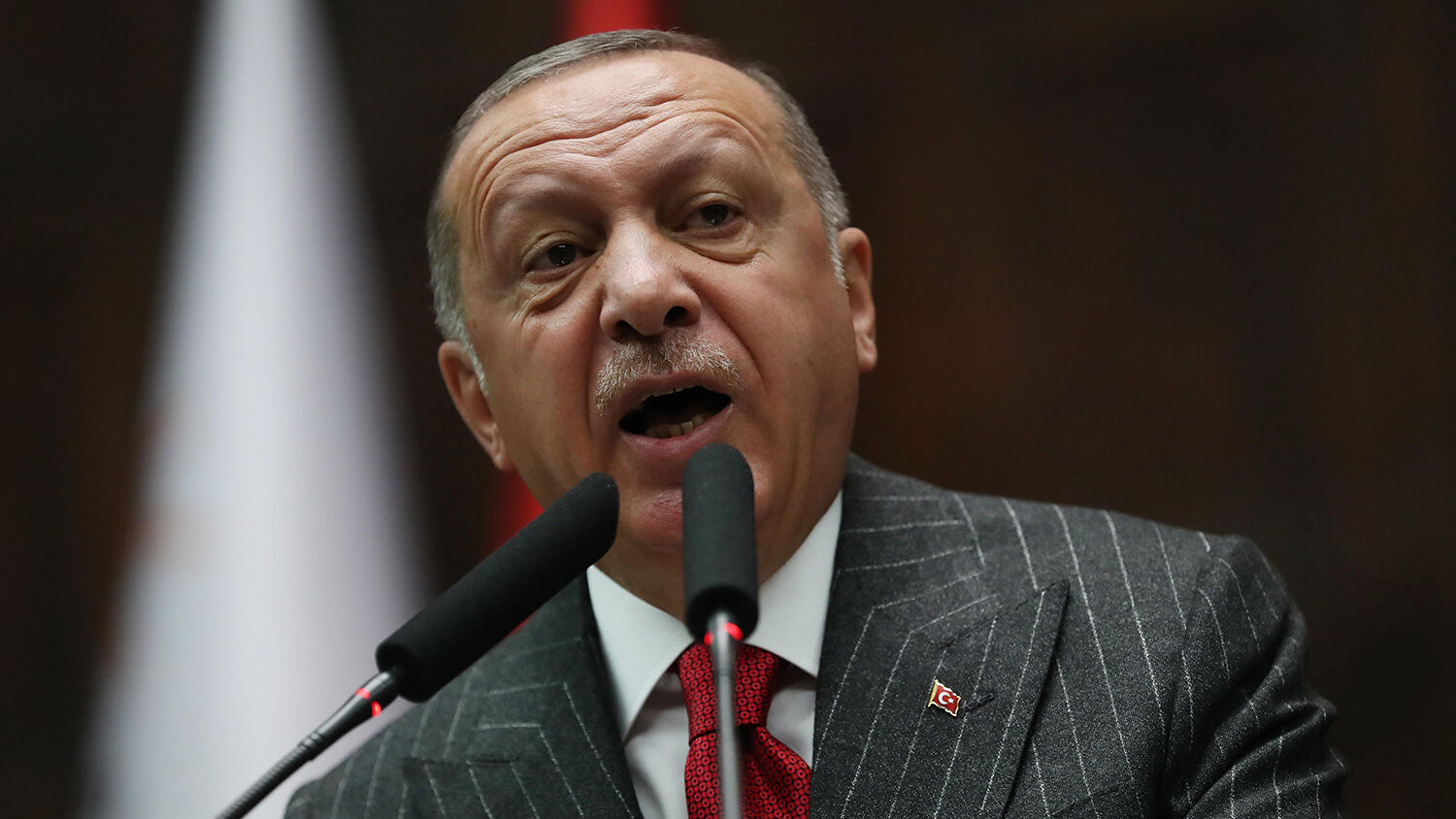 Turkish President Erdoğan addresses party members during his party’s parliamentary group meeting at the Grand National Assembly of Turkey on May 7, in Ankara.
ADEM ALTAN/AFP/Getty Images

Turkey’s strongman cracks down further on opposition to his power.

Turkey’s Supreme Election Council announced on May 6 that the results of Istanbul’s recent election will be nullified and the vote will be rescheduled. President Recep Tayyip Erdoğan’s party had been defeated in the original vote on March 31. Opposition candidate Ekrem İmamoğlu was sworn in as mayor on April 17. However, his mayorship has been canceled and an interim mayor appointed until new elections are held on June 23.

Erdoğan controls all levels of government and jails his opponents in politics and the media. Despite this, his party lost in Istanbul—but now he is voiding that vote. This confirms that democracy in Turkey is dead.

Erdoğan rose to prominence in 1994 when he was elected mayor of Istanbul. He established the Justice and Development Party (akp) in 2001, became prime minister in 2003, and transitioned to president in 2014, tightening his grip on the country with each passing year. The 2014 election included suspicious akp victories at the local, parliamentary and presidential levels. In 2016, a section of the military attempted to oust Erdoğan from power, but the president quickly and easily defeated the coup and took the opportunity to purge about 150 generals and other government officials.

When the opposition social-democratic Republican People’s Party won the Istanbul vote by a narrow margin, the akp filed a formal complaint. Erdoğan called for a “return to the ballot boxes,” saying, “Fraud and corruption are evident here”—ignoring the fact that fraud and corruption have been evident in his party’s victories.

The election board said that the decision to rerun the election was based on material evidence of fraud, including unsigned documents and ballot officials who are not civil servants. But few believe these are legitimate crimes. In the past, there was much stronger evidence of fraud by Erdoğan’s party, but it was never investigated. The Republican People’s Party deputy chairman, Onursal Adıgüzel, posted on social media, “It is legal to run against the akp, but illegal to win against them. This is plain dictatorship.”

In the June 23 repeat election, Erdoğan will apparently prevent fraud and corruption by appointing members of his own party as election monitors.

Analysts see Mr. Erdoğan’s fingerprints on the decision, and warn that Turkey and free elections no longer belong in the same sentence. “For nearly 70 years, there was a consensus in Turkey that political power changed through the ballot box, and that consensus came to an end today,” says Soner Çağaptay of the Washington Institute for Near East Policy, an American think tank. “I thought there was one institution in Turkey that could act somewhat independently,” said Kemal Kirişci, a senior fellow at the Brookings Institution, “and I was wrong.”

The Wall Street Journal wrote, “A repeat election in Istanbul could set the stage for a brutal confrontation between an increasingly authoritarian Mr. Erdoğan and an emboldened opposition, which won control of the capital Ankara and several other large cities in the municipal election.”

A large number of frustrated citizens are demanding that members of the election board resign and are fearful of the effect that a repeat election will have on a vulnerable economy.

The Wall Street Journal wrote that for Erdoğan to lose a city of 16 million people, with a $4 billion annual budget and a staff of 82,000, “risked spawning a powerful rival for the next presidential election,” which will be held in 2023. “It is too big for Mr. Erdoğan to lose,” said Çağaptay. Erdoğan’s party has ruled in Istanbul for the last 25 years, since he became mayor.

The Istanbul election came during a time of increasing fears that Turkey is falling deeper and deeper into dictatorship. The opposition party’s victory indicated the vote was, to some degree, free and fair. Many thought that Erdoğan’s losses in Ankara and Istanbul were an opportunity to prove that Turkey is still at least partially free.

Journalists called the results a “turning point … which showed that Turkish democracy—or what remains of it—still has a pulse.”

“The fact that Erdoğan has lost Ankara and Istanbul, … two symbols of political and financial power, will give hope to a young generation of Turks who have seen nothing but Erdoğan’s electoral victories,” the Brookings Institution wrote shortly after the election. “The results also prove that Turkey is not a dictatorship. But make no mistake, Turkey is still an autocracy. And it is clearly still too early to rule Erdoğan out of Turkish politics. But there is no doubt that the Turkish strongman has entered the last and most difficult stage of his political career.”

That was until Erdoğan exerted his newest bold display of authority. Since Imamoglu took office on April 17 (before being removed on May 6), several investigations into the alleged fraud have begun, and at least 100 ballot officials have been questioned.

Mehmet Bekaroğlu, a Republican People’s Party member of parliament, claimed that Erdoğan’s party threatened election board judges with prison if they voted against redoing the vote.

Whether this claim is true or not, Erdoğan will not give up his role as Turkey’s strongman.

The January 2018 issue of the Trumpet focused on the roles of authoritarians around the world. The articles “King Me” and “Recep Tayyip Erdoğan: Self-Serving Sultan” noted that between the failed coup of July 2016 and January 2018, Erdoğan had fired 146,713 teachers, academics, politicians, military officials; shut down more than 3,000 educational institutions; dismissed 4,463 judges and prosecutors; and arrested 61,247 individuals. He shut down 187 media outlets and arrested 308 journalists. In 2017, Turkey passed a law allowing Erdoğan to stay in power until 2029 as long as he continues to win elections. And as long as he has the power to annul election results that he doesn’t like, his party will continue to win elections.

It is not yet certain that Erdoğan and his party will hold on to power in Istanbul or the nation as a whole, but it wouldn’t be surprising. It wouldn’t be the first time he has come out of a setback with more power than ever. And it seems that this is already the case in his party’s defeat in Istanbul.

Erdoğan will not let go of his power without a fight. Could he be the man to lead Turkey in its fulfillment of Bible prophecy?

Biblical prophecy does not say whether or not Erdoğan will continue to rule Turkey, but it does indicate that there will be a strong ruler in Turkey capable of navigating powerful alliances, especially with a German-led Europe. It also states that Turkey will be part of one of the greatest double crosses in history, against the modern nations of Israel (read more of these prophecies in our free booklet The King of the South). Given Erdoğan’s self-serving alliance in nato, as well as his cool relationship with the Jewish state of Israel, he becomes a probable candidate to lead Turkey to fulfill those prophecies.