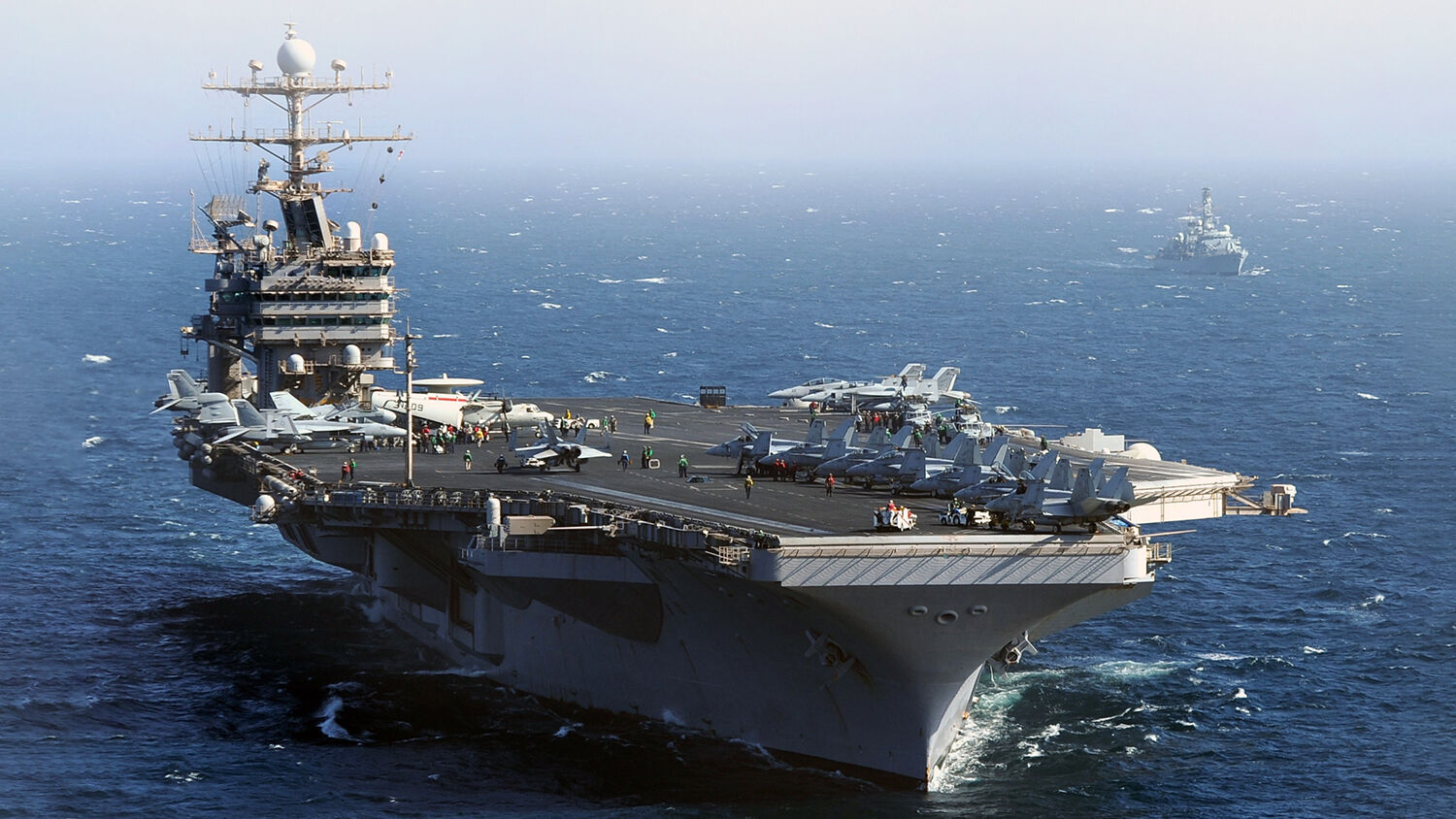 The New York Times seems to think so.

jerusalem
United States National Security Adviser John Bolton wrote on May 5: “In response to a number of troubling and escalatory indications and warnings, the United States is deploying the uss Abraham Lincoln Carrier Strike Group and a bomber task force to the U.S. Central Command region to send a clear and unmistakable message to the Iranian regime that any attack on United States interests or on those of our allies will be met with unrelenting force.”

The statement is meant to give notice to Iran that the U.S. is aware of an imminent threat to allied forces in the Gulf, and it is bringing in muscle to persuade Iran from acting. If history is our guide, this show of force by the U.S. will make Iran think twice before acting.

Mark Dubowitz, who studies Iran for the Washington-based policy institute Foundation for Defense of Democracies, said, “If past is prologue, the regime will always move aggressively forward when it senses American weakness and recoil when it sensed American strength.”

The uss Abraham Lincoln carrier group was already in the Mediterranean and was due to enter the Persian Gulf in two weeks. Now it is sailing straight to the Gulf. Far from a huge change of policy to prevent an attack on American allies in the region, it is simply a restoration of the status quo. U.S. carrier groups are often present in the Persian Gulf.

This show of strength actually makes the Middle East safer, not more dangerous as many in the media are reporting.

However, the New York Times, Politico and BuzzFeed would have you believe there is no current threat to American forces in the region, and it is not Iran but the U.S. that is the aggressor in the Middle East.

According to them, Bolton’s statement and the corresponding redeployment of forces are aggressive U.S. actions that are pushing the region toward war.

But is that true?

A couple of weeks ago, Axios revealed that Israeli intelligence tipped off the U.S. that Iranian proxies were planning an attack on American or allied forces in the Gulf. cnn also revealed, after Bolton’s statement, that Iran was planning to move some of its ballistic missile capabilities onto ships. The Wall Street Journal also revealed that intelligence had warned that Iran was seeking to use its proxies to target U.S. forces in Kuwait, as well as to orchestrate drone attacks in the Persian Gulf.

And so, what seems to be an understandable reaction to a threat of violence—the redeployment of a carrier group to the Gulf, which has been the status quo for the past two decades—has now turned into an international event of a belligerent and warmongering America trying to pick a fight with Iran.

On May 6, Politico headlined this piece: “Trump Inches Toward Military Confrontation With Iran.” The article stated: “Taken together, Trump’s ‘maximum pressure campaign’ against the Islamic Republic and its latest attempt at gunboat diplomacy may be reaching a hazardous crescendo.”

Then it quoted Alex Vatanka, a senior fellow at the Middle East Institute, saying: “I don’t think either side wants to go to war, but this is the kind of brinksmanship that could get out of hand.”

Tensions escalated between the United States and Iran on Monday as the Trump administration accused Iran and militias that it backs of threatening American troops, and Iran signaled it might soon violate part of the 2015 nuclear deal it reached under former President Barack Obama. …

Taken together, the moves by both sides have brought relations between President Trump and Iran to a new low after a period of rapprochement that began in 2013 during the Obama administration.

While it is true that there were better relations between the Iranian regime and the U.S. under President Barack Obama, that didn’t result in a restrained Iran.

But the New York Times won’t talk about that. It went on to write (emphasis added):

The Trump administration has consistently sought to isolate Iran’s clerical government. One year ago, Mr. Trump withdrew the United States from the nuclear deal that was brokered with world powers and, in the last month alone, moved to cut off Iran’s remaining oil exports and designated an Iranian military unit as a terror organization.

Iran’s expected suspension of some elements of the nuclear deal appeared to be a response to the aggressive American policies, which were underscored by the announcement of the uss Abraham Lincoln heading to the Gulf.

See, to the New York Times, it’s America that is aggressive—not the clerical regime in Iran, which as recently as last week told Israeli Prime Minister Benjamin Netanyahu that he should learn to swim because Iran is about to push Israel into the Mediterranean.

But to the New York Times and others, it’s the United States that is the aggressor in the Middle East.

Then the New York Times wrote this:

The sanctions on Iran’s oil exports were escalated two weeks after the country’s Islamic Revolutionary Guard Corps was placed on the State Department’s list of foreign terrorist organizations—the first time that the designation was given to an arm of another nation’s government.

American intelligence and Defense Department officials had opposed the terror designation, concerned that Iran would similarly target or attack American troops and intelligence operatives in the region. Last week, President Hassan Rouhani of Iran declared all American forces in the Middle East as terrorists and labeled the United States government a state sponsor of terrorism.

And so, for the New York Times again, it’s the United States that instigated the escalation. They designated part of the Iranian military as a terrorist organization. “Defense officials,” likely holdovers from the Obama administration, warned the government that Iran might retaliate, and lo and behold, we see that Iran is planning to retaliate.

To the New York Times, if only the State Department didn’t designate them as a terrorist organization, we would not have come to this.

They are arguing that Mr. Trump is pushing the region into war.

What the New York Times failed to address was whether the Islamic Revolutionary Guard Corps actually is a terrorist organization—which it is. It funds, supplies and directs Hezbollah, which has killed hundreds of Americans through terrorism. It also funds, supplies and directs Iraqi militias. A report released last month stated that it caused at least 608 American deaths in the Iraq War. Iran also funds Hamas, another well-known terrorist organization.

This week, Iranian-backed proxies in the Gaza Strip fired 690 rockets at southern Israel. (I was among those who had to seek cover.) Also this week, Israel assassinated the individual responsible for transferring cash between Hamas and the Islamic Revolutionary Guard Corps.

Proof is everywhere in the Middle East that Iran is the aggressor. But not for the New York Times.

Toward the end of the article, the authors wrote, “But memories of the Iraq War and Mr. Bolton’s own long history of harsh rhetoric on Iran have left administration officials under pressure to produce evidence of the imminent threat. By late Monday, no one in the Trump administration had stepped forward to make a specific case.”

With this, the New York Times actually implies that the Trump administration is deceitfully inventing an imminent threat from Iran toward the U.S. or its allies.

To them, Trump and his cabal of foreign-policy hawks like Mr. Bolton and Secretary of State Mike Pompeo want a war with Iran, and so they are making up threats to position themselves to strike.

Who would have thought that the New York Times would side with Iran over the United States?

But this is exactly what is happening.

Is the United States really steering the region toward war?

The New York Times and others might want you to believe so. But even as it peddles that narrative, it is actually downplaying the real aggressor in the region—the Iranian regime.

American strength has proved to be the only deterrence against Iran’s aggressive behavior in the region. And that’s why the U.S. is moving its carrier group back to the Persian Gulf.

The New York Times is not just going against facts—it’s also countering what the Bible says of the Iranian regime.

For two decades, we have continually drawn attention to a latter-day prophecy in Daniel 11:40, which discusses two end-time kings. One of those kings, the king of the south, is described as pushing at the other king, which then leads to a devastating counterstrike. Since 1994, Trumpet editor in chief Gerald Flurry has forecast that the radical Islamist regime of Iran leads this king of the south.

This is why we constantly report on every destabilizing, belligerent and aggressive action of the Iranian regime.

Iran’s pushy foreign policy is actually a sign that we are close to the fulfillment of Daniel 11:40.

In effect, when the New York Times peddles a narrative that it’s not Iran but the United States that is the aggressor in the Middle East, it is actually countering the warning message that God is giving.

But you do not need to be fooled. The ever increasing aggressive policies of Iran are a sign of where we are in the timeline of prophetic events that culminate in the return of Jesus Christ to this Earth. While the U.S. certainly has its sins (and we consistently expose those as well), it is Iran that is the true aggressor in the Middle East—just as the Bible said it would be in the last days.

To understand more about these prophecies concerning Iran and how it will push the world into another world war, please read Mr. Flurry’s free booklet The King of the South.