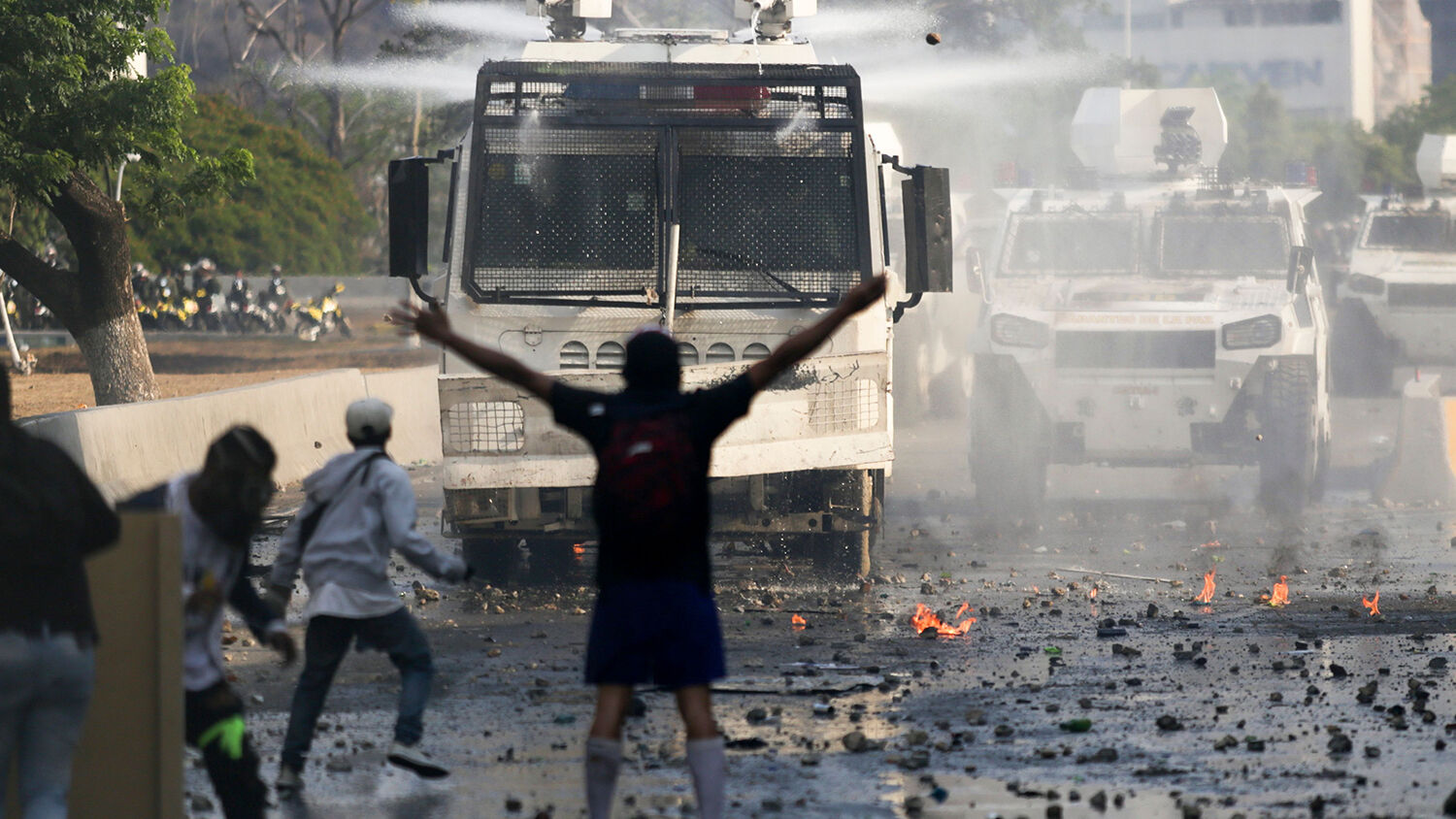 Anti-government protesters clash with security forces in Caracas during May Day celebrations on May 1.
CRISTIAN HERNANDEZ/AFP/Getty Images

Thousands of Venezuelans clashed with pro-government forces on April 30 when opposition leader Juan Guaidó and a small cadre of military officers tried to overthrow Venezuelan President Nicolás Maduro. This attempted coup, dubbed Operation Freedom, was supposed to trigger a split in the Venezuelan military, force Maduro into exile, and usher in Guaidó as an interim president until free and fair elections could be held. Instead, it prompted pro-Maduro security forces to crush all resistance. More than 60 people were injured and video footage shows an armored vehicle running over demonstrators.

At first, it seemed like Operation Freedom might succeed. United States President Donald Trump tweeted, “The United States stands with the people of Venezuela and their freedom.” U.S. national security adviser John Bolton announced that several key members of Maduro’s government had agreed to a peaceful transition of power to Guaidó. But when Maduro failed to flee the country, the coup failed. The whereabouts of Guaidó are currently unknown, but many other opposition leaders have already been arrested.

U.S. Secretary of State Mike Pompeo told cnn on April 30 that Maduro was actually preparing to surrender power and seek asylum in Cuba, but that the Russians had talked him out of it.

“He had an airplane on the tarmac,” Pompeo said. “He was ready to leave this morning, as we understand it, and the Russians indicated he should stay.”

Ties between Russia and the U.S. have worsened since Russia annexed part of Ukraine in 2014. Now it is making a play in America’s hemisphere by supporting an anti-American regime in Venezuela.

“We haven’t seen the Russians in the Western Hemisphere this strongly with the Cuban Missile Crisis, with military assets,” Rep. Michael McCaul told Fox News on Wednesday. “They love nothing more than to poke us in the eye.”

Russia has publicly admitted to sending military personnel and nuclear-capable strategic bombers to Venezuela. Rep. Mario Díaz-Balart has even suggested that Russia may have already installed nuclear missiles in Venezuela, like its attempt to install nuclear missiles in Cuba in 1962. He did not offer proof of his claim, but Russia has the missiles and the political connections in Venezuela to make this frightening scenario a reality.

There have been no foreign nuclear weapons in the Western Hemisphere since the Cuban Missile Crisis.

Both Russia and China are making economic and military inroads into the Caribbean Sea. “There is a new Cold War in the Caribbean,” reported guest contributor Scott B. MacDonald in Global Americans. “Venezuela is the current flashpoint, but Cuba, a country where China has emerged as a major investor and trade partner, is next, especially in the face of a reassertive U.S. seeking to protect its geostrategic underbelly.”

Even the European Union is starting to get involved in the great power jockeying in the Caribbean. While the EU has joined the U.S. in calling for free and fair elections in Venezuela, it has also threatened to sue the U.S. at the World Trade Organization over sanctions imposed on Cuba. Like Russia and China, the EU is more concerned about protecting its economic investments in Latin America than it is about toppling anti-American dictatorships. China, Europe and Russia are all backing Cuba against the U.S.

Astonishingly, Bible prophecy indicates that China, Europe and Russia will soon be backing many other Latin American nations against the United States. Some 2,700 years ago, God inspired the Prophet Isaiah to write about a vast trade bloc—“a mart of nations”—that would form in the end time (Isaiah 23:3).

Verse 1 shows that a lead nation in this trade bloc would be “Chittim.” Trumpet editor in chief Gerald Flurry explains in his booklet Isaiah’s End-Time Vision that Chittim, or Kittim, is an ancient name for modern China. Another leading entity in the trade bloc is “Tyre.” Mr. Flurry explains that this represents “the commercial center” of modern Europe. A related passage in Ezekiel 27 mentions ancient names for modern Russia (Tubal and Meshech), showing that it too will join this “mart.”

China, Europe and Russia will team up to besiege the nations of end-time Israel (the United States and Britain, primarily). And since roughly half of U.S. seaborne-trade passes through the Caribbean Sea and Gulf of Mexico, these three powers will need to dramatically increase their presence in the region. So it is tremendously significant that Russia is moving military equipment into Venezuela while the EU moves to thwart America’s embargo against Cuba. A time is coming when a collation of foreign powers will “conquer” the Caribbean and use it to economically besiege the United States.

For a more detailed explanation of why God is sending such terrible curses on America, read Mr. Flurry’s article “America Is Being Besieged Economically.”