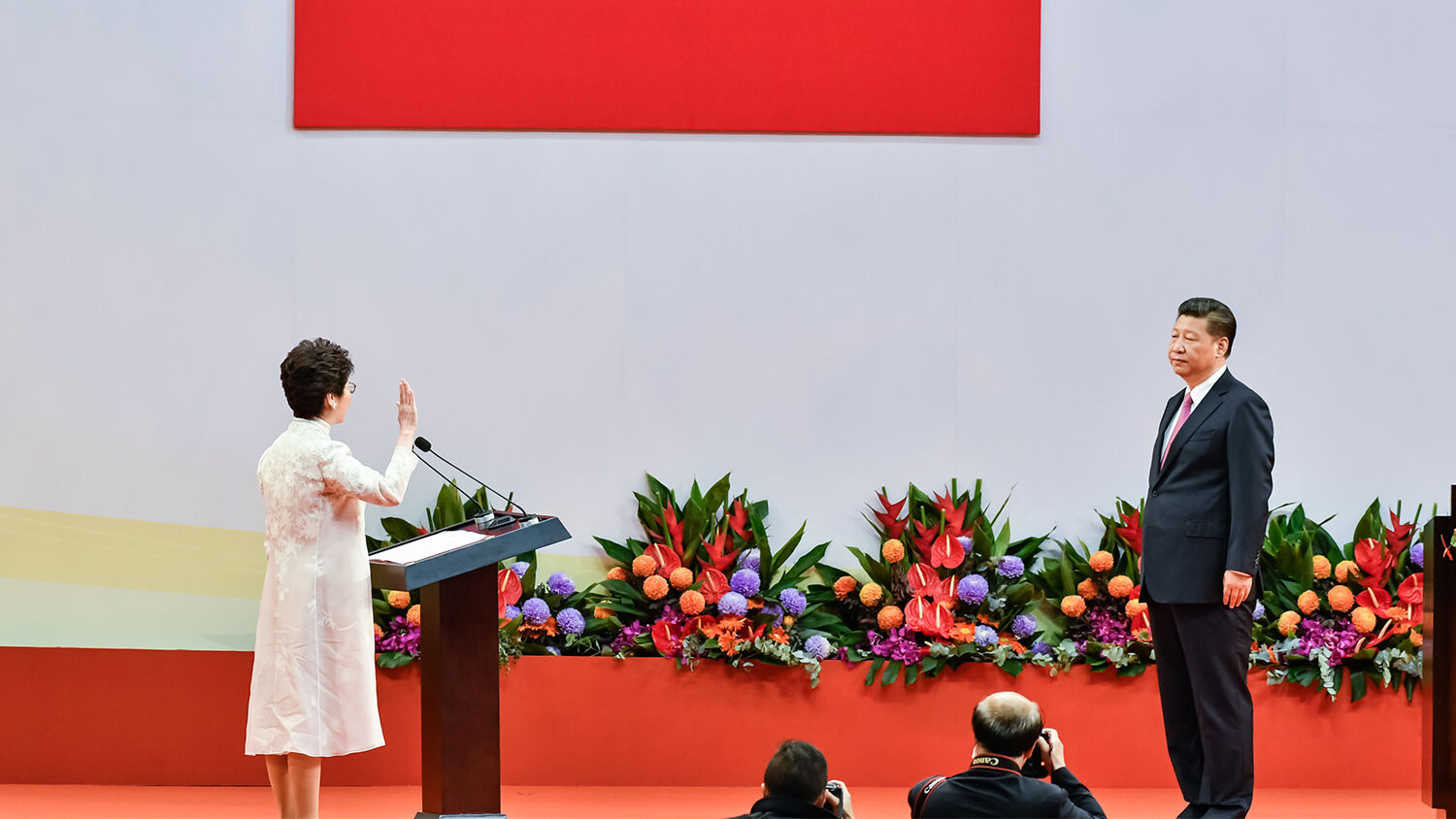 Crackdowns on peaceful protesters and pro-independence movements show who is in charge.

China is tightening its grip on Hong Kong. One recent demonstration of this came when Hong Kong Chief Executive Carrie Lam Yuet-ngor vowed in a report released on April 18 to rid Hong Kong of pro-independence movements. The report and the policies it delineates were specifically requested by the Chinese government in Beijing in a clear encroachment on Hong Kong’s autonomy.

Lam promised in the report to continue banning the pro-independence Hong Kong National Party and to “prohibit any act and activity endangering national security (including ‘Hong Kong independence’),” which is a movement that advocates for Hong Kong to become a sovereign nation.

A member of the Civic Party of Hong Kong called Beijing’s heavy-handed interference in Hong Kong’s domestic affairs “unprecedented” and said, “We fear that it will open a flood gate and in the future Beijing could interfere with any other domestic issues.”

On April 24, in another sign of China’s tightening grip, a Hong Kong court sentenced four prominent pro-democracy activists to prison for public “nuisance charges” committed during the 2014 Umbrella Movement protest. The 2014 peaceful protests were a reaction to Beijing’s decision to allow only preapproved candidates to run for the 2017 election of Hong Kong’s chief executive. After a weeks-long trial that was closely watched by Beijing, two founders of the peaceful movement were sentenced to 16 months in jail, while two others received eight months.

Twenty-two years ago, Britain ceded Hong Kong to Chinese rule. At that time, China promised the people of Hong Kong that for at least 50 years, they would be allowed to continue their economic policies and have a “high degree of autonomy.” But less than half that time has elapsed, and it is clear that China is breaking this promise and dramatically tightening its grip on Hong Kong.

This highlights two prophetically significant trends: the decline of British power and the rise of China as a superpower.

Situated strategically between the South China Sea and the Pacific Ocean, Hong Kong is at a vital crossroad connecting the East to the West. Its location also imbues whichever power controls it with the ability to control the strategically important South China Sea. The combination of the legacy of British rule and this strategic geographic location helped to make Hong Kong one of the wealthiest and most important cities in the world.

In biblical terms, Hong Kong’s geography makes it a “sea gate.” In Genesis 22:17, God promised to give the descendants of Abraham control over the “gates of their enemies” (International Standard Version). One of the main nations that descended from Abraham is Britain, which you can prove by reading The United States and Britain in Prophecy, by the late Herbert W. Armstrong. In his masterful book, Mr. Armstrong offered a clear definition of this biblical term:

A gate is a narrow passage of entrance or exit. When speaking nationally, a “gate” would be such a pass as the Panama Canal, the Suez Canal, the Strait of Gibraltar ….

The term can also apply to important coastal locations such as the Cape of Good Hope, the Falkland Islands and Hong Kong. During the colonial era, Britain and the United States came to possess dozens of these sea gates. Mr. Armstrong proved that the peoples of the United Kingdom and the U.S. are the descendants of Abraham in whom this promise was fulfilled. He explained that this fact is one major proof that the U.S. and UK are, in fact, Abraham’s descendants. He wrote:

[T]he nations who are Abraham’s racial descendants are to possess the gates of their enemies. … Britain and America came into possession of every such major “sea gate” in this world! So we must be modern Israel.

The Bible also prophesies that Britain and the U.S. would later lose control over these “sea gates.” Deuteronomy 28:52 states: “And he shall besiege thee in all thy gates, until thy high and fenced walls come down, wherein thou trustedst, throughout all thy land: and he shall besiege in all thy gates throughout all thy land, which the Lord thy God hath given thee.”

In 1954, the British gave the Suez Canal away. Soon after, the Cape of Good Hope, Malta, Singapore, Cyprus and the Panama Canal were given away. With Britain’s handover of Hong Kong to China in 1997, and as the British continue to lose their other sea gates around the world, this prophecy is racing toward complete fulfillment.

Meanwhile, China now controls many of the formerly UK- and U.S.-run sea gates, which is contributing to its rise. Just as with the decline of Britain, China’s rise was also prophesied in Scripture.

Gaining control of Hong Kong was a major boon for China.

Hong Kong is an important gateway in and out of mainland China, especially because it is vital to controlling the South China Sea. It also attracts foreign investment. Last year, 46 percent of overseas-funded projects approved by China came through Hong Kong. More than a thousand mainland companies are listed in Hong Kong’s market, accounting for $2.6 trillion or 68 percent of its market. Hong Kong is the largest offshore renminbi market, a platform for Chinese banks to strengthen their international market position. “With Beijing’s plans to make Hong Kong its most important offshore yuan trading center, the city would be indispensable to China,” Dr. Lim Taiwei of the National University of Singapore’s East Asian Institute said.

Hong Kong is also a key player in the Greater Bay Area plan, China’s blueprint to transform Hong Kong, Macau and nine other southern Chinese cities into a global center for advanced technology and innovation, rivaling America’s Silicon Valley. This plan intends to make Hong Kong an even greater financial and trading hub than it already is.

One reason China is tightening its grip on Hong Kong is to take advantage of Hong Kong’s economic wealth. And China’s power is increasing in considerable part because of this domination.

In the late 1950s, about a decade after the Communist Party of China won a bloody civil war, Mr. Armstrong predicted that China would eventually combine its military might with that of Russia and become an aggressive world power. The December 1959 Plain Truth states:

Red China insists it has a legal right not only to Tibet but [also] to many parts of India and Southeast Asia. … [The Mongols and Chinese’s] constant dream for centuries has been ultimate world conquest! … China knows, however, that in this highly industrialized age she can accomplish this dream only as an ally of Russia. … China is now ready to begin devouring the rest of Asia with Russia’s secret military backing.

Today, it is clear that China and Russia are close partners, and that they are both becoming more aggressive. How could Mr. Armstrong have predicted these trends with such accuracy? He based his forecasts on Bible prophecy, just as the Trumpet does today.

Ezekiel 38 describes a powerful alliance between Russia and China along with other Asian powers. The book of Revelation calls this Asian bloc “the kings of the east” (Revelation 16:12). Revelation also says that the kings of the east will amass a staggeringly large army of 200 million men (Revelation 9:16). These are some of the scriptures Mr. Armstrong relied on to make his accurate forecast about China’s rise.

The combination of Hong Kong’s strong economy and its strategic “sea gate” location facilitating control over the South China Sea makes it easy to see why China is tightening its grip on the territory. Even though 28 years remain of the 50 that China promised Hong Kong a “high degree of autonomy,” China is breaking its promise and using its tightening grip on Hong Kong to achieve its “constant dream” of conquest.

To understand more about this subject, please request your free copies of The United States and Britain in Prophecy and He Was Right.