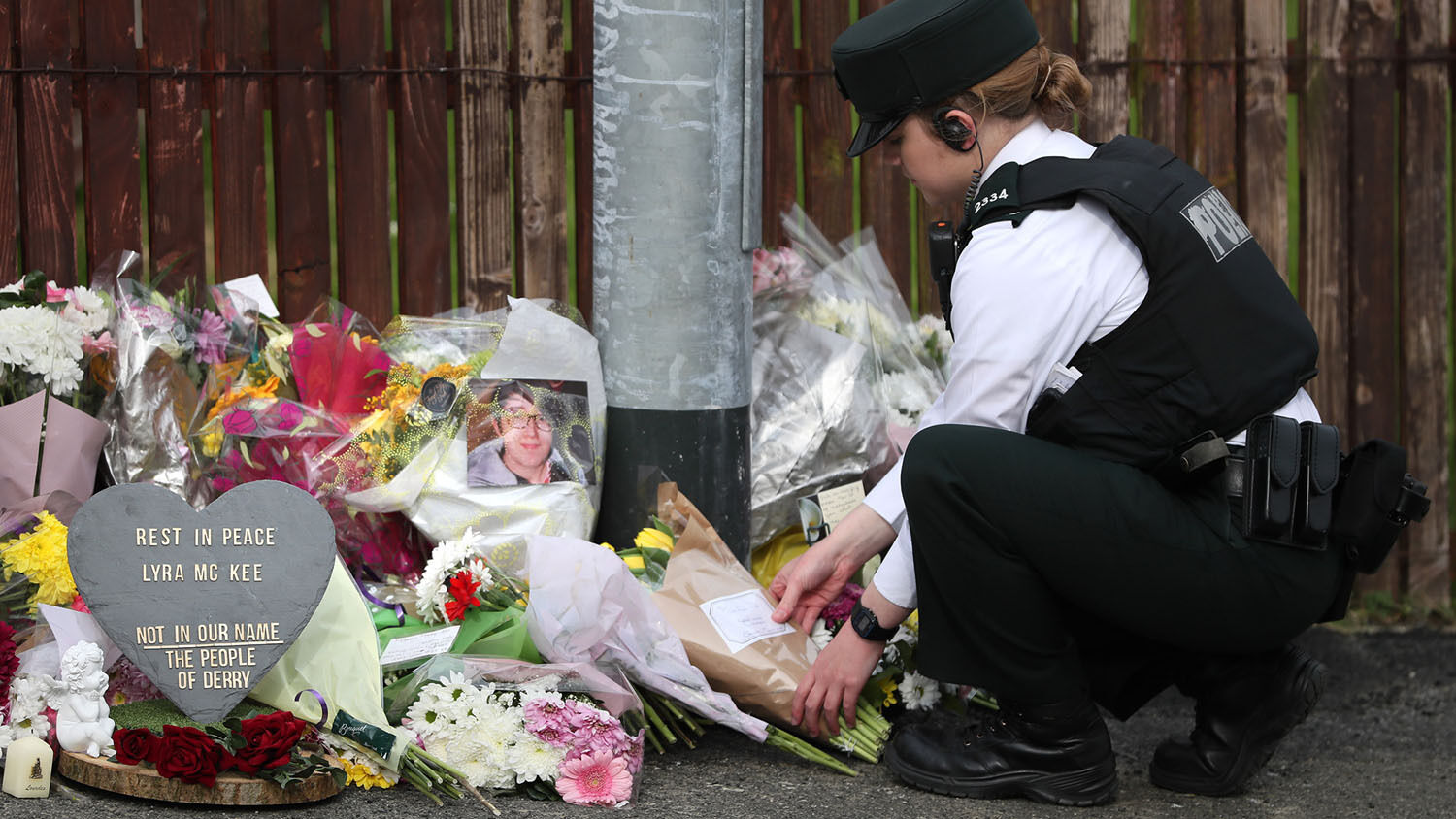 A police officer lays flowers at the scene where 29-year-old journalist Lyra McKee was shot last night in Londonderry, Northern Ireland, after guns were fired and petrol bombs were thrown in what police are treating as a “terrorist incident.”
Brian Lawless/PA Images/Getty Images

With the death of a journalist in Londonderry’s riots, what should we watch for in an increasingly violent Northern Ireland?

Irish journalist Lyra McKee was shot and killed by a member of the New Irish Republican Army (ira) during a riot in Londonderry on April 18, while standing beside a police vehicle. The incident has sparked new outrage and fears in a city historically known as a flashpoint for violent opposition against British rule.

Lyra McKee, born in Belfast, had been covering the tensions in Northern Ireland when her life was ended by a bullet from an ira terrorist, most likely aimed at one of the police officers she was standing beside.

The New ira, formed in 2012, is a combination of violent groups springing from the Provisional ira. The Provisional ira was a terrorist group that agitated for independence from Britain and engaged in violent terrorism during the Troubles, lasting from the late 1960s to 1998, when it and other political groups in Northern Ireland signed a ceasefire established by the Good Friday Agreement. The New ira opposes that agreement. It detonated a car bomb in Londonderry in January and mailed parcel bombs to targets in London and Glasgow in March. The group admitted to killing McKee and issued an official apology. But the apology reveals underlying attitudes of division and the potential for more violence.

“In the course of attacking the enemy, Lyra McKee was tragically killed while standing beside enemy forces,” read part of the New ira apology statement. The statement went on to describe in what way ira members were to “engag[e] the enemy” and called police conducting search warrants “heavily armed British crown forces.”

These “heavily armed British crown forces” are in reality regular police officers carrying out legal search warrants, aimed at preventing violence on the anniversary of the Easter Rising of 1916. Rioters used the search warrants as a pretext to stage the protests, which led to an ira member killing McKee. The rioters also threw gasoline bombs at police vehicles. In the hours before she died, McKee tweeted about the “absolute madness” she witnessed on the streets of Londonderry.

It appears that the ira only issued the apology after being called upon to do so by other left-wing groups and pressured by police, who designated the incident as a terrorist act. A 57-year-old woman has been arrested as a suspect in McKee’s murder, but the investigation is ongoing.

Sinn Féin is the political element of the ira. Those who oppose British rule of Northern Ireland tend to align with Sinn Fein. Ten years ago, when a Northern Ireland police officer was killed during riots, a prominent Sinn Fein member called the gunmen “traitors.” When the Belfast Newsletter asked party members if the same could be said of those who killed McKee, most declined to use that terminology.

Increasing violence in Northern Ireland is becoming harder to ignore. Many think back to the Troubles, which killed more than 3,000 people. The violent groups of decades ago were never fully eliminated, as the New ira demonstrates. Their increasing aggression has many concerned for the future of Northern Ireland and for the peace of the United Kingdom in general.

In the March 2000 issue of the Trumpet, late columnist Ron Fraser wrote that “the public fails to realize … that Northern Ireland is still an armed camp! Individual ira Brigade leaders possess a mindset of never parting with one bullet—they would rather die first!” This mentality still exists, with deadly consequences.

The Trumpet also wrote about the European Union’s increasing involvement in this controversy, predicting that “it is entirely feasible that [then] Prime Minister Blair’s government may find the outcome of the Irish peace process being dictated by the European Union.” Today we see exactly that: The EU is using the Irish border issue as a sticking point in Brexit negotiations.

The tension in Northern Ireland, caused by Brexit and resurgent nationalism among some Northern Irish, is a thorn in Britain’s side.

There is a specific reason why the Trumpet watches Northern Ireland. When the Bible mentions Israel in its prophecies, it is referring to the modern-day descendants of that ancient nation. These include Britain, its commonwealth and the United States. (Request a free copy of The United States and Britain in Prophecy, by Herbert W. Armstrong.) Bible prophecies describe rioting and anarchy, which will lead to British cities being thrown into chaos and burned.

The word pestilence just means destruction or death (see the Gesenius’ Lexicon). One definition of the root word is “to lay snares, to plot against, to destroy.” So this pestilence could be a plague of violence or burning—not necessarily a physical disease at all! It can be defined as a plague of violence or rioting—such as the Baltimore riots in 2015 or the September 11, 2001, terrorist attacks! Why would the first third be burned with fire (verse 2), if it refers to a disease epidemic?

The only way to stop the rioting, looting and destruction is for individuals—and the nation—to repent toward God. Treaties like the Good Friday Agreement will eventually fail to restrain the natural human tendency of factional violence, as recent events are increasingly demonstrating. Lyra McKee’s tragic death shows the violent intent behind this movement; as one friend of McKee said after the shooting, the ira has avoided truly taking responsibility “by saying it was an accidental shooting. You don’t shoot accidentally.”

Don’t we see that same plotting and spirit of violence today in the tensions simmering over Northern Ireland and Brexit? That tension snapped only a few decades ago. Could it do so again? As Europe continues using the Irish border dispute as leverage to gain power over Britain, renewed violence might result.

Regardless, violence will engulf Britain’s cities. But there is good news: You can be protected from it. To find out how, and to read more on the subject of Britain’s future, request your free copies of The United States and Britain in Prophecy and Ezekiel: The End-Time Prophet.