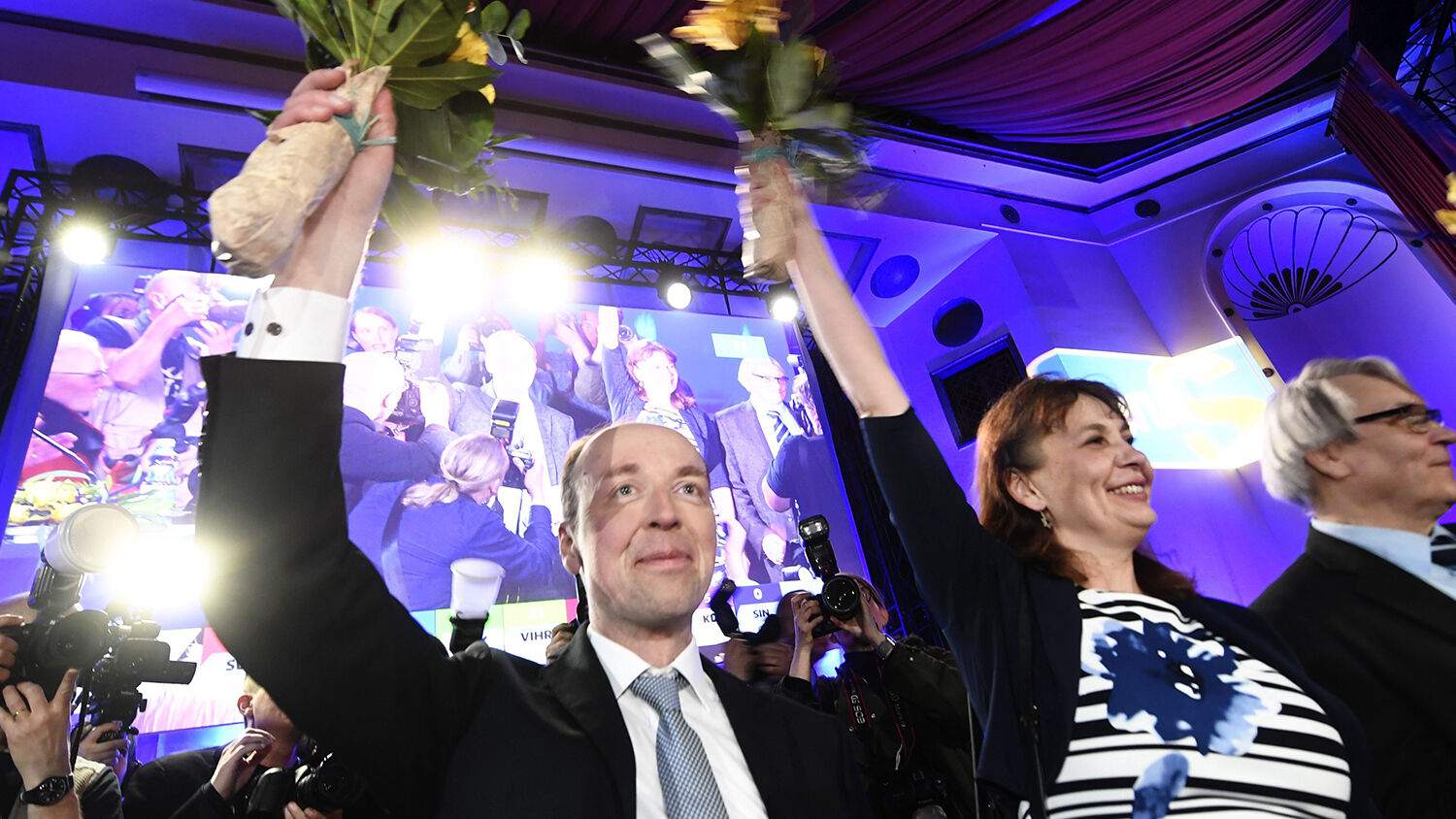 Finland’s election shows that the European Union can no longer ignore the far right.

A former fringe party classified by the media as far right came within a whisker of winning Finland’s election on April 14. The Finns Party won 39 seats in Parliament and 17.5 percent of the total vote compared to the Social Democrats’ 17.7 percent.

But the big takeaway from the Finnish vote is how the fear of migration tops almost every other political issue.

Social Democrats chairman Antti Rinne campaigned on the promise to relieve Finns’ financial problems. Many Finns were unhappy with the strict austerity program of Finland’s center-right party under the leadership of Prime Minister Juha Sipilä. Rinne is now in the position to start coalition negotiations and become prime minister. But his party gained only 40 of the 101 required seats to run the government. Rinne needs to form a coalition with at least two or three more partners.

A coalition with Sipilä’s Central Party seems likely, but it won’t be straightforward, since the Social Democrats’ campaign was built on opposing his center-right government. Forming such a coalition would lead to difficult compromises and could be seen as a betrayal of voters. What’s more, it would further strengthen the far right in the country.

The Social Democrats could also form a coalition with the far right. Before the elections, Rinne said that his party would find it “very difficult” to form such a coalition. But after the Finns Party came within 0.2 percent of winning the election, it will be hard to ignore them. Excluding the Finns Party from negotiations would greatly limit coalition talks and upset a significant portion of the population.

Unlike in years past, one can no longer push the far right aside. But cooperating with instead of opposing Finland’s far-right party also brings concerns. Since 2017, far-right party leader Jussi Halla-aho has moved Finns Party further to the right—and more than doubled its seats in Parliament from 17 to 39. Campaigning against the European Union’s monetary and migration policies, the party soared in popularity. Deutsche Welle commented:

In order to win votes, Halla-aho used the same strategy many right-wing populist parties resort to: disproportionately inflating and generalizing the actual problems criminal asylum-seekers pose. Suddenly, all immigrants became potential sexual criminals, the people of Finland were threatened by an “invasion” of Muslims. The actual figures do not back up those claims, but it was nonetheless easy to tout the mantra: “Finland first.”

Due to its geographic location, Finland has been significantly less affected by the refugee crisis than those on the European mainland. Migrants in Finland make up less than 3 percent of the population. In Germany, 12.5 percent of the population has a foreign nationality, and every fifth German has an immigration background. Under Sipilä, Finland has already tightened asylum laws significantly, granting fewer asylums and conducting more deportations.

If you consider Finland’s economic state and the threat from Russia’s rising military power, you would think the topic of migration would have played little-to-no role in the election. And yet the far right in Finland almost won the election largely due to this issue.

There is no doubt that migration poses a danger to Western civilization. This danger may be greater than the Western media and leaders will admit, and less dangerous than the far right claims. But how great the real danger is, or is not, is not actually the most important factor to consider when it comes to Europe’s leadership. The bigger question is: How fearfully do people perceive that danger and how will the EU deal with it?

EU citizens feel ignored by their leaders, and their fears are increasing no matter what the EU tries to tell them.

At the beginning of 2019, “the Finns Party was polling at 10 percent, but then a high profile criminal case led to a debate about asylum seekers and criminal migrants,” Deutsche Welle noted. “According to police statistics, 18 percent of criminals are migrants, while migrants, as a whole, make up less than 3 percent of the population. The number of votes that went to the far-right populists almost doubled.”

But Finland’s migration influx has little to do with EU policy against which Halla-aho campaigned. Most immigrants to Finland in recent years did not come from Muslim countries but from Russia and Ukraine. This fact “played no role in Finland’s election campaign,” Deutsche Welle noted. “People are obviously dissatisfied with their governments; they want change, even if their feelings of insecurity are not always supported by facts.”

The people’s fears might seem irrational; nonetheless, the EU threatens to fall apart if these fears remain ignored. Quoting statistics and facts matter little to a population that believes that their leaders are lying to them. European parliamentary elections will be held in less than five weeks’ time. All indications are that far-right parties will gain unprecedented success.

The EU can no longer ignore far-right parties or the voters who support them. But how will it deal with the fear spreading across Europe?

Europe’s Fear and Its Coming War

“A trend is unfolding in Europe that you should keep a close watch on,” Trumpet editor in chief Gerald Flurry wrote in “The Holy Roman Empire Goes Public—Big Time!” He continued:

Europeans have been besieged by immigrants from the Middle East, growing Muslim populations within their midst, cityscapes filling with mosques and minarets, portions of their cities turning into Muslim enclaves that local police dare not enter, even Islamic terrorist attacks.

The people in Europe are suspicious. Of course not every migrant is a terrorist. But how can you know if the Arabic-looking man that visits a mosque every Friday and rides every morning in your bus with his backpack will not one day detonate a bomb?

Every terrorist attack, every crime committed by a refugee adds to the increasingly irrational fear of European citizens. Radical Islam is purposely spreading this fear to divide Europe. But little does it know where it will end.

The king of the south (radical Islam headed by Iran) is increasingly pushing at Europe. But Europe will respond in an unexpected way. Daniel 8 reveals that “a king of fierce countenance” will rise in Europe and lead its armies to war. Today, this might still seem irrational. But watch: As the people’s fear grows stronger and stronger, they will do almost anything this prophesied strongman tells them to do.

The Bible foretells that this man will lead Europe into war against radical Islam. As a result of the utter destructiveness of modern warfare, the people in Europe will never again fear a Muslim invasion. But their fears and conflicts will not end.

Next, the people in Europe will fear the rise of Russia and China. Daniel 11:44 says that “tidings out of the east and out of the north [referring to Asian nations]” will come; as a result, Europe will be led into yet another war. As the Prophet Habakkuk reveals, in this end time, it will seem as if wars will never end (Habakkuk 2:17).

But the Bible also reveals that hope lies just beyond the turmoil, not only for those who survive the coming nuclear war but for all mankind that has ever lived. Request a free copy of The King of the South, by Gerald Flurry, to learn about how and when wars, fears and suffering will end. The prophecies discussed in his booklet show exactly why right-wing parties in Europe are rising, why people fear radical Islam, and how God will intervene in world affairs and give people freedom from fear.