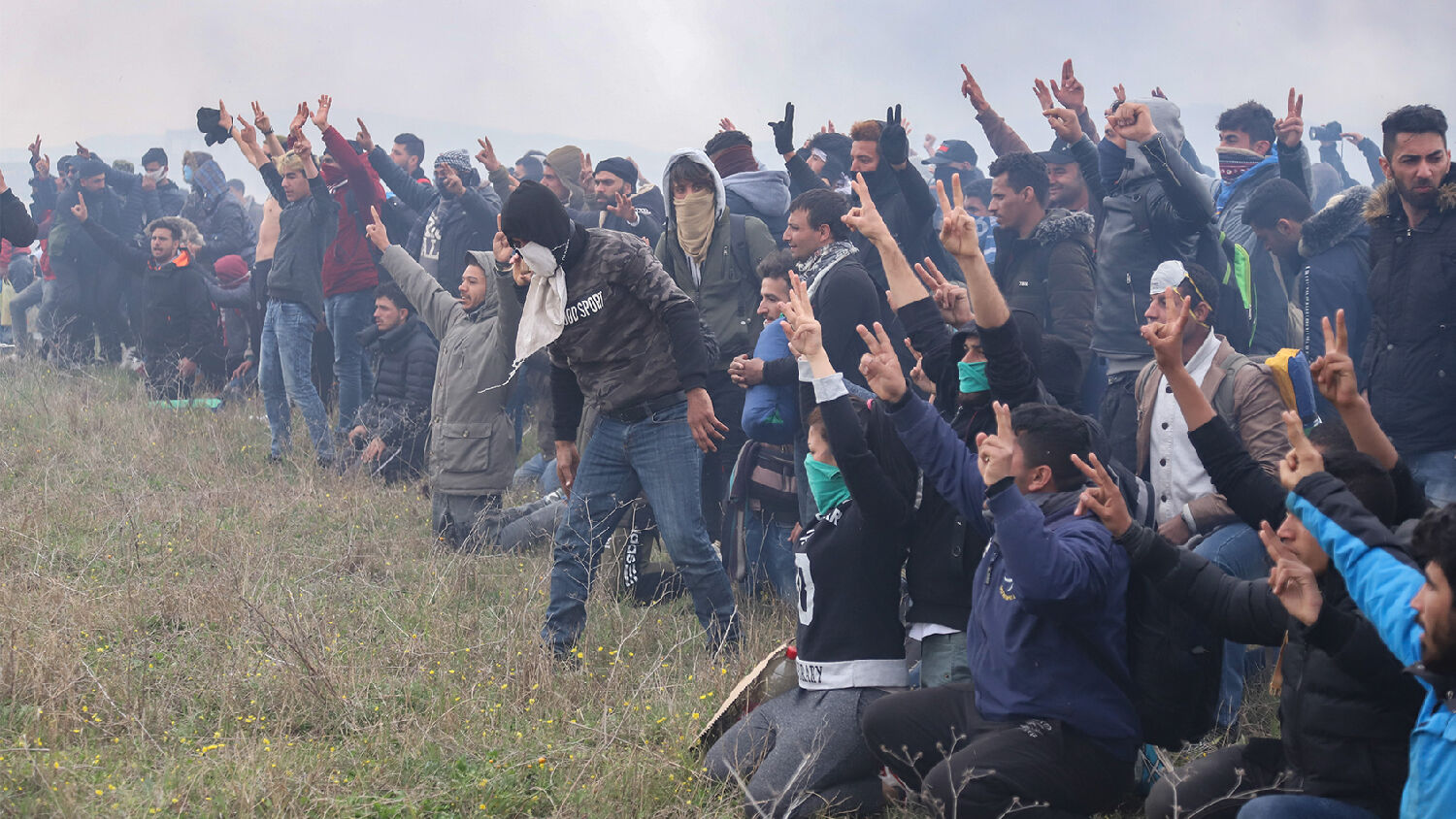 After a false rumor of open borders spread via social media, angry migrants throw stones, bottles and sticks at Greek police on April 6, trying to march to Greece’s northern border and continue into Central and Northern Europe.
Getty Images

Cardinal Robert Sarah warns Europe of the dangers of mass immigration. Returning to Europe’s Catholic ‘roots and identity’ is the proposed solution.

A high-ranking bishop in the Catholic Church has made it his mission to open Europe’s eyes to the dangers posed by Muslim immigrants.

“As a bishop, it is my duty to warn the West,” said Cardinal Robert Sarah, the Vatican’s prefect of the Congregation for Divine Worship and the Discipline of the Sacraments. Known for his conservative stance on social and moral issues, he has called out liberal Catholics, declaring that “it is a false exegesis [interpretation of scriptural text] to use the Word of God to promote migration. God never wanted these heartbreaks.”

The cardinal claims that the immigration crisis is not only harmful to Europe, but to the migrants themselves. “All migrants who arrive in Europe are penniless, without work, without dignity. … The church cannot cooperate with this new form of slavery that has become mass migration.”

Cardinal Sarah has compared the modern influx of Muslim migrants to the invasions of barbarian tribes that ultimately brought down the Roman Empire in a.d. 476. If Europe’s policies toward Muslim migrants don’t change, Sarah warned, Europe will be “invaded by foreigners, just as Rome has been invaded by barbarians. … If Europe disappears, and with it the priceless values of the Old Continent, Islam will invade the world and we will completely change culture, anthropology and moral vision.”

In an interview with French journalist Nicolas Diat, the cardinal made his comparison clear. “As during the fall of Rome, elites are only concerned to increase the luxury of their daily life and the peoples are being anesthetized by ever more vulgar entertainment. … The barbarians,” he said, referring to Islamic migrants, “are already inside the city.”

The number of migrants fleeing to Europe has fallen dramatically since 2015, when Europe recorded its highest number of arrivals at more than 1 million. However, Cardinal Sarah warns that fresh arrivals of Muslim immigrants are not the only problem. He also cited the disparity between the birth rate of native Europeans and Muslims in Europe. “If the West continues in this fatal way,” he said, “there is a great risk that, due to a lack of birth, it will disappear.”

Sarah’s views and declarations put him at odds not only with his liberal colleagues, but also with the pope. Pope Francis has been an outspoken advocate for liberal immigration policies, especially in his ongoing feud with United States President Donald Trump over the proposed wall at the U.S.-Mexico border. “It is the fear [of migrants] that makes us crazy,” Pope Francis has said. In 2016, he declared that “a person who thinks about building walls … is not Christian.”

The Trumpet watches Europe’s migrant crisis with great interest. And despite the differences of opinion between political figures—and even clergy—we can know for a fact that conservative voices like Sarah’s will win out. This is because of key prophecies in your Bible!

Daniel 11:40 prophesies that Europe will be instigated by an aggressive king of the south. Iran is drawing closer and closer to having nuclear weapons by which it could threaten the West. Terrorist attacks are occurring all over Europe. Islam is literally pushing into Europe in the form of migrants who refuse to assimilate.

Soon, once the pushing becomes too much to handle, Europe will push back “like a whirlwind” and crush the king of the south.

What is it that will act as the catalyst to unify the nations of Europe into the king of the north? Sarah touched on this in his interview with Diat. In order to deal with the “threat posed by Islamism,” he says, Europe must “rediscover its Christian roots and identity. A West that denies its faith, its history, its roots and its identity is destined for contempt, for death and disappearance.”

Europe’s Catholic roots, and the accompanying history, are key to European unification. Trumpet editor in chief Gerald Flurry brought out this point in his article “The Spirit of Charlemagne Is Alive in Europe.” Throughout the past 1,400 years, the Holy Roman Empire has risen up time and again. The first rise of this church-state combine was led by Justinian after a.d. 527, as he championed the Imperial Restoration of the Roman Empire. Five more resurrections of that kingdom have followed, and one more is occurring today! “Each of these empires,” Mr. Flurry wrote, “has been an unholy union between the Vatican and worldly European rulers and their armies. Each of these empires has spilled rivers of blood in the name of God.”

Perhaps the most prominent aspect of the Continent’s “roots and identity,” as Cardinal Sarah put it, is the second resurrection of the Holy Roman Empire: Charlemagne. Mr. Flurry has drawn much attention to the spirit of Charlemagne rising in Europe today. He has repeatedly referenced Otto von Habsburg’s declaration: “We do possess a European symbol which belongs to all nations equally. This is the crown of the Holy Roman Empire, which embodies the tradition of Charlemagne” (emphasis added).

Mr. Flurry continued in his article:

Pope Leo iii crowned Charlemagne (Charles the Great) emperor of the Holy Roman Empire on Dec. 25, a.d. 800. He is honored in history because he reestablished Western Europe for the first time after the fall of the Roman Empire 300 years earlier. But what was his reign like? It was continuous war! It was a bloody empire unlike any that came before it. Charlemagne spilled rivers of human blood ….

That is the spirit of Charlemagne.

That is the spirit that is rising in Europe today. It is the spirit that Cardinal Sarah is encouraging the West to return to in order to combat the threat of Islam! By “rediscover[ing] its Christian roots and identity,” coming under the umbrella of Catholic unity, Europe is rediscovering the bloody spirit by which Justinian, Charlemagne, Otto the Great, the Habsburgs, Napoleon and Hitler built their empires!

As the immigration crisis in Europe continues to agitate, watch for Europe to move closer to a Catholic-dominated combine following in the spirit of Charlemagne.

Also request a free copy of our book The Holy Roman Empire in Prophecy to better understand the history and future of Europe.