The Trumpet is just the tip of an unfathomably huge iceberg 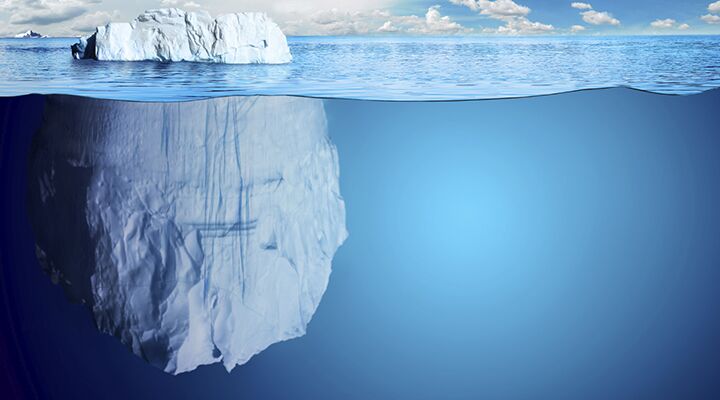 The Trumpet is just the tip of an unfathomably huge iceberg

There are always critics. We recently received a letter complaining that the Trumpet focuses too much on Germany’s threat to the United States while ignoring several other potential problems. “While I think your articles are good,” the letter said, “I find that they suffer from tunnel vision. You seldom mention the many other plagues and catastrophes that are upon us as a nation.”

Well, here’s another edition of the Trumpet talking about Germany. Does this man have a point? Does the Trumpet have tunnel vision?

Or is he the one with limited vision? Might there be more to the picture than this man understands?

The Trumpet may in some ways look and read like other newsmagazines. But those magazines merely contain reports on what is currently happening in the world. Their contents are dictated by the world around them. They report on a staggering number of global trends and problems.

By contrast, this magazine’s contents are dictated by current events only partly. The flood of information our writers and editors see and read each month is sifted through a very precise filter: We focus on what God tells us to.

That filter is best summed up in one Bible verse, which constitutes virtually the whole purpose for the magazine you hold in your hands right now: “So thou, O son of man, I [this is God talking] have set thee a watchman unto the house of Israel [that’s America, Britain and other Western nations]; therefore thou shalt hear the word at my mouth, and warn them from me” (Ezek. 33:7). God knows there are catastrophes awaiting mankind, specific catastrophes. And He wants to warn people of what is about to happen—what He foretold millennia ago would happen. Humanity has brought impending destruction upon itself. God has no pleasure in the death of the wicked, but wants all people to turn to Him (v. 11).

To deliver His warning, God uses people. He sets up a “watchman,” revealing to him the meaning behind His Bible prophecies. (Revelation is the only way to understand them, as “no prophecy of the scripture is of any private interpretation”—II Peter 1:20.)

If those prophecies focus on Germany’s threat to the U.S., so then does the Trumpet. If God reveals that He prophesied of a German-controlled Europe one day making slaves of Americans after a nuclear World War III, you can be sure that as we see current events setting the stage for that scenario, we’re going to trumpet as loudly as we can about it.

That critic wrote that he thinks immigration is a greater threat than Germany. But what does the Bible have to say about immigration? In comparison to those things you see often in the Trumpet, somewhat little. If God sees it as more of a minor threat, so do we. (We do, however, plan to write about it in an upcoming issue).

The Trumpet purports to be nothing less than God’s warning to mankind. (That’s not to say there’s nothing to criticize; like everyone, we make mistakes. We pray that they won’t be major mistakes.)

It was probably for statements like these that another reader recently criticized us for being “one-sided, dogmatic and intolerant” in our publications, as well as “self-congratulatory.”

But is it possible that we’re speaking the truth?

Christ made what most people—especially religious people of His day—considered outlandish statements. He claimed to be the Son of God. People called it blasphemy. But what distinguished Him from anyone else who may have said such things is that He could back those statements up. The more deeply someone looked into His life, the clearer it would have been that He was exactly who He said He was.

The same is true of the Trumpet. The fact is, this magazine is just the tip of an unfathomably huge iceberg.

Other publications put out by the Philadelphia Church of God, which publishes this magazine, begin to reveal more of that iceberg. They serve purposes quite different from that of the Trumpet. For example, we have advertised in this magazine True Education, the “Trumpet Jr.”—our magazine for youth. If you’ve never seen it, you wouldn’t know that it has featured articles about (among many other things) health, travel, sportsmanship and sex. To this point, we have yet to broach the subject of Germany. Another magazine we produce, called Royal Vision, contains “principles of living” material—marriage, family and child rearing, education, faith, finances.

Looking into any of the other literature we have offered in this magazine (and there is much more available that hasn’t been offered) reveals a lot of ground our books and booklets cover. God’s revelation is more comprehensive, more far-reaching, more mind-expanding, more exciting and inspiring than anything you’ve ever come into contact with. But God won’t give anyone more than he is ready for.

When you evaluate the Trumpet, remember that scripture: Warn them from Me. We are not Germany bashers. We are only as “one-sided, dogmatic and intolerant” as the Holy Bible is. We are only as “self-congratulatory” as was Christ.

We are not tunnel-visioned. We are only trying to fulfill what God requires of us.

If you don’t believe that, perhaps you should consider looking into what we’re saying more deeply.