After almost 15 years in the doldrums, signs show that the land of the rising sun is rousing to action. 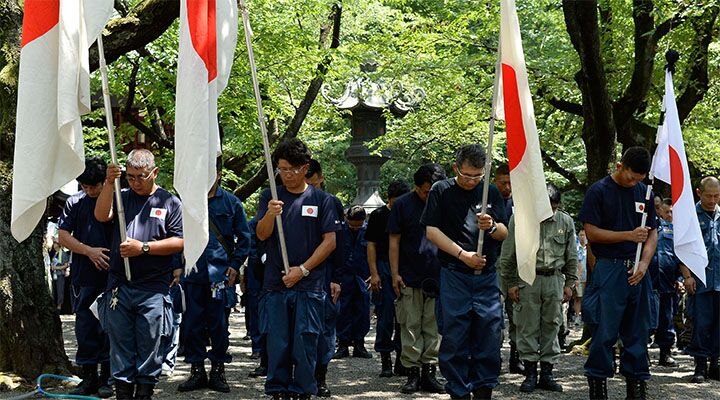 After almost 15 years in the doldrums, signs show that the land of the rising sun is rousing to action.

Following the 60th anniversary of the defeat of Japan in World War ii, the Western press is not reading Japan’s future well at all. It seems the U.S. administration is likewise blind to Japan’s developing future.

This economic giant, having wallowed since 1991 in a financial bog largely of its own making, is finally showing signs of turning the corner into modest—at present, very modest—growth.

In addition, the nation appears to be more readily coming to terms with shedding its post-war pacifist cloak and preparing itself for a stronger defense posture.

Of themselves, these twin phenomena might appear well overdue. Japan certainly needed to show some sign of positive economic growth in order to regain its position as an effective contributor to the global economy. In terms of post-9/11 defense and security, the amendment of its constitution to permit a stronger military role, long encouraged by the U.S., would seem appropriate in these times of heightened terrorist activity and geopolitical change.

However, when we add a third worrisome ingredient to this equation, one must certainly consider history a valid guide as to where this may lead. Japan is also showing overt signs of increasing nationalism.

Concerning Japan’s economy, according to Oxford Analytica, “The Nikkei index and interest on 10-year government bonds have been rising, and business rebounding. Corporate confidence is up on improving capital returns. This can be expected to have a positive knock-on effect throughout the economy, reinforcing the gentle recovery underway this year and improving the outlook beyond” (August 17).

Think tank Stratfor, although more cautious in its assessment, concurs that things are beginning to brighten on Japan’s economic horizon. To the news that Japan’s economy expanded at an annualized rate of 1.1 percent in the second quarter of 2005, Stratfor wrote: “It might not sound like much—particularly to Americans, whose economy has been growing in excess of 3 percent a quarter for the past two years and who have not experienced a recession since 2001—but for Japan this marks the third consecutive quarter of growth after 15 years of economic malaise” (August 12).

Referring to Japan’s structural deficits, its “crushing debt, the inflexible labor market and the inability of the Japanese to invest their money where they want,” Stratfor opined, “This is actually a humming little recovery, once you factor out all of Japan’s problems.”

If Japan’s economy is, indeed, turning the corner, what impending policy decision could really kick the economy back to life? Simply to implement the plan to remove the pacifist clauses from its basic constitution. This would legitimize a retooling of Japanese industry, allowing for an upswing in armaments manufacturing. No matter that Japan is, even in its “pacifist” mode, the second-largest spender on military hardware already (only the U.S. spends more on national defense).

The proposed amending of its constitution would also give to this Eastern nation, which boasts the second-largest navy in the world, something with which to greatly embellish even its existing arsenal of military hardware—prestige!

Asia Times recently reported, “Given a rapidly changing Asian security scenario wherein China and India loom large as future military powers, Japan has seen fit to take the first steps to carve out a more active role in international defense, according to experts. ‘Japan has preferred to play a low profile in post-war security, but this is changing steadily,’ Japanese military analyst Toshiyuki Shikata said. ‘Today, Japan is paving the way to becoming a respected power in Asia.’ Japan unveiled its new defense white paper this week. In it, the government defines the future role of its Self Defense Forces (sdf) as one that is better able to deal with new threats to national security such as ballistic missile attacks and terrorism” (August 5).

The defense white paper is predicated on Japan’s ruling Liberal Democratic Party deleting from Article 9 of the Japanese Constitution a sentence stating that military “forces as well as other war potential will never be maintained” and another sentence stating that “the right of belligerency of the state will not be recognized.”

Such an ability as the white paper proposes would place Japan, for the first time in 60 years, on an equal footing with the world’s greatest military powers. The nation could then look Russia, China, the European Union, even the United States in the eye—finally—as an equal on the international political scene.

Observers might consider such a scenario as providing a more balanced equation geopolitically in the Far East. If so, they would either be ignorant of, or willingly avoiding, the reality of Japan’s history. For the grave danger of such a set of circumstances is posed by that third phenomenon becoming increasingly extant in the nation of Japan—nationalism.

Koizumi’s popularity and the longevity of his political career are significantly attributable to the fact that he fans the flames of Japanese nationalism. On multiple occasions during his administration, he has visited the controversial Yasukuni war shrine, a memorial honoring Japan’s war dead. Other Asian nations consider the shrine a symbol of Japanese right-wing militarism.

“It is true that Japan’s nationalism is becoming more evident and obvious to the world,” wrote one commentator in 2003. “What is not clear, however, is if Japan’s nationalism is a new phenomenon, or if the rest of the world is only now awakening to a Japanese nationalism that has been brewing for decades, if not longer” (Daily Yomiuri, Dec. 9, 2003). That opinion was expressed by Steven Clemons, executive vice president of the New America Foundation, a centrist policy institution in Washington.

Clemons went on to answer the conundrum he had posed: “Japan’s nationalism, brewing for decades beneath a cosmetic veil of pacifism, seems to be going with the flow of the return of the nation-state. It would be incorrect to argue that Japan’s recent nationalistic flirtations have anything to do with 9/11. If there has been any impact at all, 9/11 has only helped to slightly accelerate a trend that was already well under way” (ibid.).

The view that Japanese nationalism is not a recent phenomenon was supported by Rokuro Hidaka, an 88-year-old Japanese sociologist, himself a witness to the horrors of Japan’s treatment of the Chinese in World War ii. Concerning Hidaka’s views on Japan’s rising nationalism, the Japan Times reported, “History is a combination of continuity and discontinuity, Hidaka says, but in Japan a thread of continuity is inordinately strong because … this country has never really tried to break with its past” (August 15).

The Times continued, “Hidaka expresses concern over the Liberal Democratic Party’s push for constitutional revision. Looking closely at the ldp’s proposal released earlier this month, he warns: ‘If this is adopted, Japan will enter a dangerous time’” (ibid.).

Astute analysts of Japan’s history would agree with Rokuro Hidaka’s warning. They would also note an amazing paradox: The very nation that has pushed hardest for Japan to take on a more aggressive military role is the same nation that saw the cream of its naval fleet largely blown to bits by Japan at Pearl Harbor just 64 years ago.

If these three components mesh into a common equation in Japan—a reviving economy, driven by a resurgent militancy, spurred by a reviving nationalism—not only will Japan, as Hidaka puts it, “enter a dangerous time,” but also the U.S. itself will have contributed to that very danger.