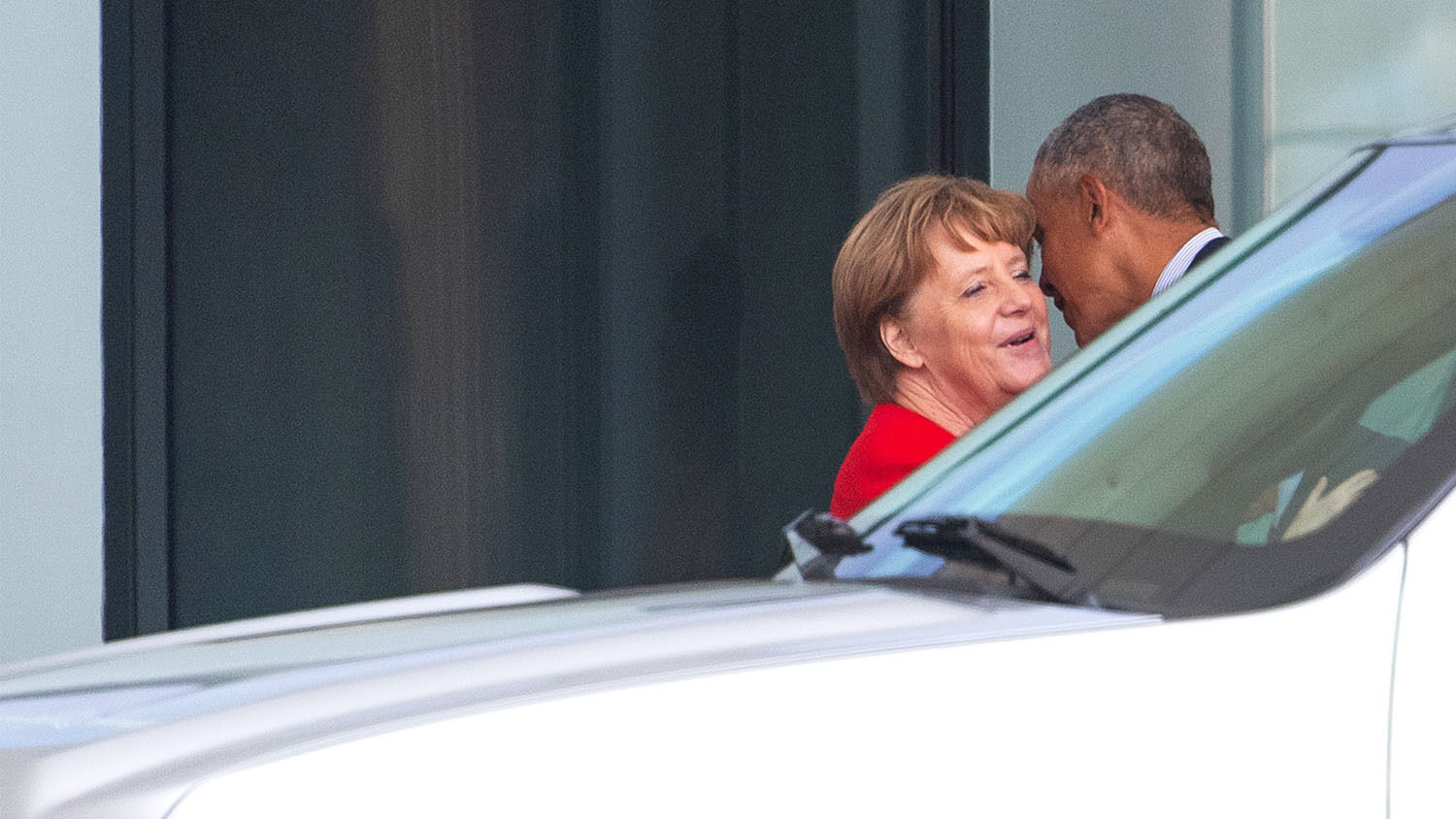 Germans want their own Barack Obama.

Former President of the United States of America Barack Obama is as popular as ever in Germany. On his visit last week to Cologne and Berlin, he was celebrated as a star. Germany and Obama are very much on the same page when it comes to opposing the current U.S. administration and supporting the unification of Europe. But what Germany needs in order to accomplish this is a leader like Obama.

Obama addressed 14,000 citizens in Cologne on April 4, held a private meeting with German Chancellor Angela Merkel the next day, and on the following day spoke at a meeting in Berlin with hundreds of emerging leaders. He didn’t mention Donald Trump by name, but he made his disdain for the U.S. president obvious and it was received with great applause.

The young people especially were ecstatic about Obama’s visit. A great majority in Germany still see him as a star and a sign of hope. Ever since he campaigned for the U.S. presidency more than 10 years ago, he has captivated the hearts and minds of many Germans.

In Germany, Obama was seen as a symbol of liberty and lifting of restraints. He was seen as heralding a new age of freedom for nations and individuals. Germans see President Trump as the polar opposite: a dark hole of old fears, restraints and suppression.

Benjamin Becker, head of the Cologne AmerikaHaus association, told a Cologne newspaper: “In Germany, there is indeed an almost universal heroization. At the time, it felt like almost everyone in Germany would have voted for Obama. The current presidency causes Obama to shine even more dazzlingly, retrospectively, in the eyes of Germans” (Trumpet translation throughout).

In Berlin, Obama explained that in order to continue his and his wife’s legacy they need to find a way to “continually duplicate ourselves so that we have thousands of activists and leaders, and then tens of thousands, and then hundreds of thousands, then millions of people who are working on behalf of the values and causes that we so deeply believe.”

He said that change doesn’t come from those in power but from citizens mobilizing and taking a stand for their beliefs.

Almost every newspaper in Germany praised Obama for his efforts. Many pointed out that despite his visible disdain for the current U.S. presidency, Obama didn’t name his successor once in his Cologne speech. This too was greatly praised by the commentators. Becker said that his performance attracted so many because he doesn’t talk “about politics of the day, because he consciously keeps aloof.”

Although he didn’t speak about politics and he didn’t say the current president’s name, everyone in the audience in Cologne and every German media outlet agree that his entire speech can be seen as a criticism against Trump.

Züddeutsche Zeitung wrote: “No, he doesn’t call him by name. That’s not appropriate.” American ex-presidents do not talk about their successors at home, let alone abroad. “And yet Barack Obama talks about Donald Trump at Cologne this evening. Again and again. No matter if he talks about women, about climate change, or about the reality every human has to face: ‘You have to form your opinion on the basis of facts, not the other way around!’ Everyone understands who he meant by that. And everybody applauds.”

The same can be assumed regarding the hour-and-a-half meeting Obama had with Chancellor Angela Merkel. No one really knows what the two talked about, but at the same time, no one had any doubt that the main topic was Trump.

Europe “has achieved the pinnacle of human well-being,” Obama told the audience in Berlin. People in Britain, France or Eastern Europe might disagree, but many Germans see truth in his statement. The heart of Europe and the top of this pinnacle of human achievement is Germany, according to Obama.

As the U.S.’s responsibility and reliability declines, Europe and thus Germany have to take the new leading role. But in this endeavor to become the new America, Europe needs a leader.

.@BarackObama: “Europe in 2019 in some ways has achieved the pinnacle of human well being.”

“Collectively in Europe right now on average you probably see the highest standards of living of any group of people in the history of the planet. Wealthier, healthier, better educated.” pic.twitter.com/jDhNLDCmMn

“I saw [Obama] speak in Berlin in 2008, and I think his charisma and his message strike a chord with everyone,” an audience member in Cologne told Deutsche Welle. “But I also think he’s a political rock star, and we’re fascinated by that in Germany; we don’t have anyone like that.”

Germans love Obama’s charisma and message. They desire a leader like him, a German Obama. In the January 2019 Trumpet issue, editor in chief Gerald Flurry wrote:

The Germans today hunger for someone different! Someone with charisma and vision—someone who can really calm their fears and address the urgent problems facing Germany and Europe.

He based this statement not only on events currently unfolding in Germany but also on Bible prophecy. Former President Obama has a unique appeal to the common people and the elite in Germany. His charisma, passion and his aura as a fighter for justice strikes chords in Germany. The people are yearning for such a leader to save them from mounting problems. As Mr. Flurry explains, Germany will get such a leader, but from there, the country will take a drastically different course. Concerning a prophecy in Daniel 11:21, Mr. Flurry wrote:

A “vile person” will lead Germany into World War iii. He won’t take charge by winning an election. Right now, Germany is struggling to form a fractious coalition government. Do you suppose this German strongman could come to power even this year by pretending to be somebody he isn’t? This leader will hijack the EU!

Germany has the number one currency in the world and has practically enslaved other European nations to the euro. Meanwhile, the United States dollar keeps getting weaker.

The coming German strongman will receive power from an evil spirit (Daniel 8:23-24). This prophecy is dual. Anciently, Antiochus Epiphanes did everything possible to destroy the faith of the Jews. That is not normal. Satan and the demons have the power to possess and control human minds! The soon-to-be leader of the Holy Roman Empire will have a “mind change” (Habakkuk 1:11).

Europe is in crisis and yearning for a bold, decisive, strong leader. Europeans will regret that desire when he finally seizes command. He will direct a European force to enter Jerusalem, posing as a peacekeeping unit, after wiping out the king of the south (radical Islam led by Iran).

Germany’s coming new leader is typed by the ancient Antiochus Epiphanes who ruled the Seleucid Empire from 175–164 b.c. Antiochus was loved by the people and had an unusual connection to them. Daniel 8 shows that an Antiochus type will rise in Germany to lead Europe to attack modern-day Israel. Israel prophetically (as the The United States and Britain in Prophecy, by Herbert W. Armstrong, explains) refers mainly to the United States, Great Britain and the Jewish nation in the Middle East.

As Mr. Flurry explains in his free booklet America Under Attack, we had an Antiochus-like leader in America recently. For eight years, the United States was governed by such an Antiochus type. Therefore, it is no surprise that the same German people who today celebrate Obama will tomorrow accept a leader who is like him.

Germans today are groaning for such leadership, but they are absolutely unaware how it will end. Soon, they will get their leader. The Trumpet has continually forecast the coming strongman, an Antiochus type. Germany’s love for Obama and desire for a strong leader show that this prophecy is about to be fulfilled. To learn more about what Antiochus leadership means for a nation, request a free copy of America Under Attack. Also read “President Obama and America’s Love Affair With Europe” to learn where the current relationship between America and Germany is prophesied to lead.