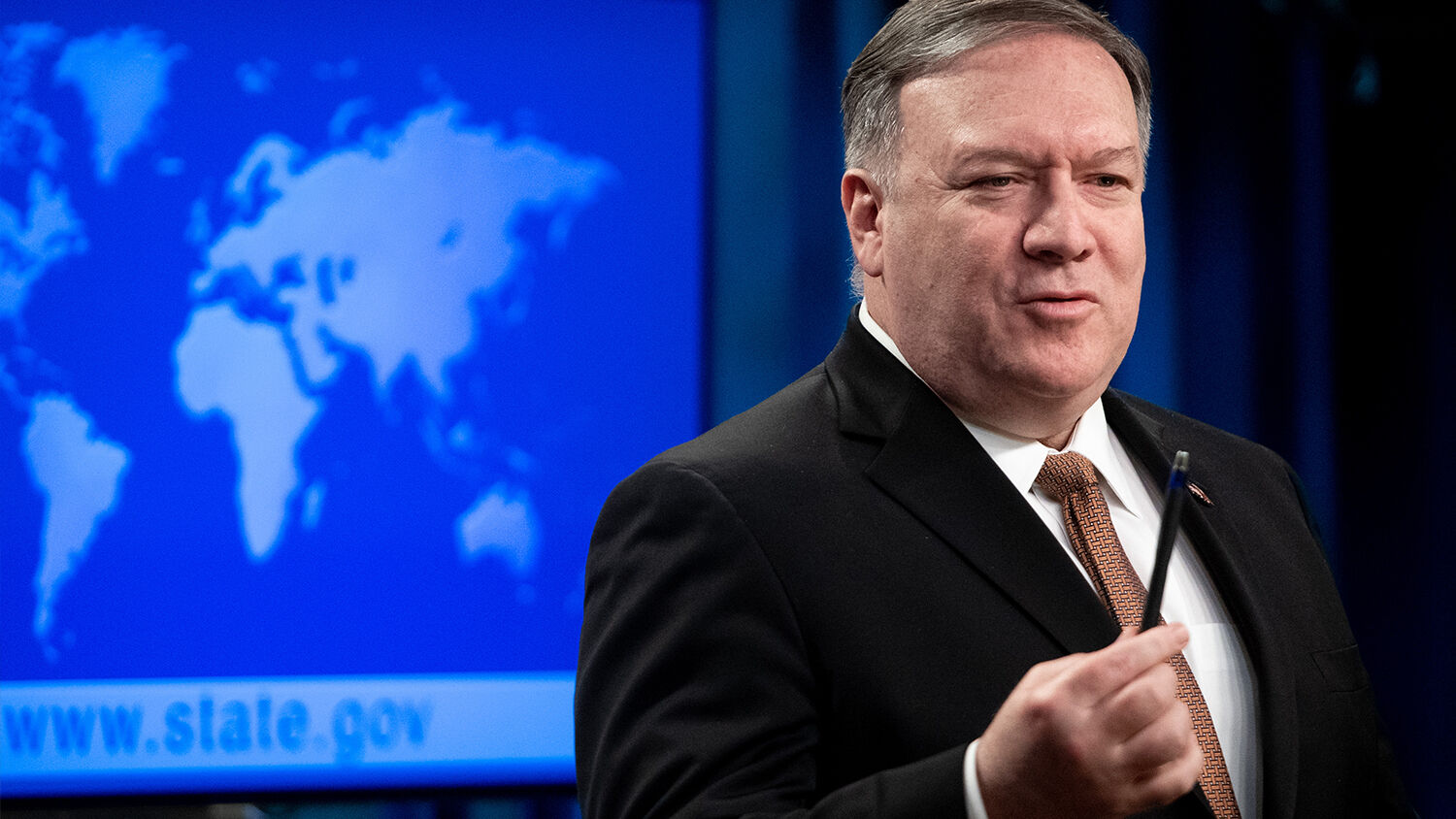 The decision to label the irgc as a terrorist organization may drive Syria and Lebanon away from Iran.

jerusalem
The United States formally designated Iran’s Islamic Revolutionary Guard Corps (irgc) as a Foreign Terrorist Organization (fto) on Monday, making it the first state institution to be given the classification.

The decision to target the irgc is the next step for the Trump administration’s campaign to pressure the Iranian regime to comply with international norms and to stop exporting its terrorism across the world.

The irgc connection to terrorism is irrefutable. The 125,000-strong military unit operates alongside the official Iranian military, answering directly to Supreme Leader Ayatollah Ali Khamenei. It readily boasts about its sponsorship of Hezbollah, Iraqi militias and Yemen’s Houthis. While the Iranian economy falters, Iran spends over a billion dollars a year to fund terrorism across the world. Last week, the United States revealed that from 2004 to 2011, the irgc was behind the deaths of 608 American servicemen in Iraq.

The U.S. has long classified Iran as the largest state sponsor of terrorism. By imposing sanctions, the U.S. is backing up its words with concrete actions.

“Now the U.S. government has formally recognized that a key part of Iran’s military is legally indistinguishable from the terrorist groups it has been sponsoring for decades,” wrote Eli Lake for Bloomberg. “Trump’s strategy, unlike his predecessor’s, begins with the premise that Iran is an outlaw state—and treats it as such until it changes its behavior.”

The statement from President Donald Trump also gave a clear warning to those that would do business with the irgc:

This designation will be the first time that the United States has ever named a part of another government as an fto. It underscores the fact that Iran’s actions are fundamentally different from those of other governments. This action will significantly expand the scope and scale of our maximum pressure on the Iranian regime. It makes crystal clear the risks of conducting business with, or providing support to, the irgc. If you are doing business with the irgc, you will be bankrolling terrorism.

In effect, this means the U.S. can target with secondary sanctions any entity that does business with the irgc, which is charged with the regime’s protection.

In November 2018, strict financial sanctions were placed on critical areas of the Iranian economy, such as banking and hydrocarbons. The new sanctions will target any of the other sectors where irgc officials are involved.

Outside observers rarely understand that the irgc is far more than just a military unit. It also controls large swathes of the Iranian economy. So much so that Dr. Saeed Ghasseminejad wrote on April 9 that the “irgc is not just guarding the regime, the Guard is the regime.”

In the past 10 years, the irgc has had between 15 percent and 25 percent of Iran’s stock market under its control, either independently or along with other military institutions. In the non-publicly traded segments of the economy, it has a presence in nearly every profitable and strategic field, from energy and construction to food and clothing.

As Ghasseminejad noted, the irgc has aggressively bought up former private companies for the past 15 years. In 2005, Khamenei privatized national industries in the banking, shipping and telecommunication sectors. These were immediately bought up by irgc or irgc-affiliated companies. Ghasseminejad continued:

Right now, the irgc or irgc-affiliated institutions are at the helm of the largest construction company in Iran and the largest telecommunications company in Iran. It also runs major airports in the country and much of the banking sector.

Any international entity doing business with these irgc companies will now incur U.S. financial sanctions. As chief executive of the Foundation of Defense of Democracies Mark Dubowitz said, “The designation will make the irgc even more financially toxic than it already is.”

This then has the potential to bleed the coffers of the irgc, and with it the money needed to preserve the regime internally and its close ties to proxy organizations elsewhere.

For years, those proxies have been designated with fto status. But somehow the organization that sponsors and directs those proxies evaded such designation as a terrorist.

With this decision, the U.S. is finally acknowledging that the Iranian regime is the head of the terrorist snake.

But will the designation and forthcoming sanctions have an effect at moderating Iran? That seems unlikely given Iran’s long-term dedication to the cause of the Islamic Revolution. Also, Bible prophecy states clearly that Iran will not change its behavior.

Nevertheless, there is evidence that this decision will severely impact Iran’s ability to project its power through its proxies, especially in Lebanon and Syria.

Designating the irgc as a terrorist organization puts the Syrian regime in an increasingly difficult position.

As recently as last week, Iran signed numerous business agreements with the Syrian government. These lucrative contracts are part of Syrian President Bashar Assad’s payment to the regime for fighting to preserve his presidency.

They included the construction of a massive power plant, rehabilitation projects in the ports of Tartus and Latakia, as well as a dozen other projects in the oil and agricultural sectors. This is in addition to running Syria’s telecommunications system.

Most of these contracts have been awarded to Iranian companies, either run by the irgc or affiliated with the irgc. In 2017, irgc leader Maj. Gen. Mohammed Ali Jafari revealed that the organization would fully spearhead Syria’s reconstruction. “Based on meetings held in the government, it was decided that this mission [participation in Syria’s rebuilding] should be assigned to Sepah [irgc] because of the security situation in Syria,” the general said, according to a Tasnim report.

Before the irgc was designated as a terrorist entity, the Syrian regime and other companies associated with the irgc reconstruction would not have suffered the wrath of secondary sanctions from the U.S.

You could argue that given Syria’s pariah status and the sanctions already leveled on it by the U.S., these added sanctions would have little effect. That might be true in the short term. But in the long term, Syria wants to rebuild and rejoin the international community. As long as it is wedded to the irgc, that will not be possible.

This just adds to the list of reasons why Syria may choose to break away from Iran.

The last foreign stop U.S. Secretary of State Mike Pompeo made before this announcement was in Lebanon. Pompeo told leading Lebanese politicians allied with Hezbollah, an irgc surrogate, that they too could be targeted with the upcoming sanctions.

“While in Lebanon, Pompeo had said that the U.S. is inclined to sanction political ‘individuals’ linked to Hezbollah to curtail the group’s military and political growth and in effect the influence of its patron, Iran, in the region,” Al-Jazeera reported.

It only makes sense to sanction the Lebanese government if it is in cahoots with Hezbollah, since it is basically the Lebanese version of the irgc.

Apparently, Pompeo told Lebanon’s speaker of the house and its president that they are on the shortlist to be sanctioned “unless they pull the reins on Hezbollah,” Hanin Ghaddar, a visiting fellow at the Washington Institute for Near East Policy, told Al-Jazeera.

The fact that the U.S. warned the Lebanese government, and that it has given it some time to act, shows that Pompeo believes it’s possible to sideline Hezbollah politically in Lebanon. Such would be an unparalleled victory for the U.S. in its Iranian policy.

It’s possible that Mr. Trump’s stronger Iran policy will actually bring about the fulfillment of Bible prophecy. While the Bible indicates Iran will stay on its hegemonic course, it also indicates that Iran will lose control of both Syria and Lebanon.

For more than 25 years, we have explained that Iran leads the biblical “king of the south” mentioned in Daniel 11:40. This Islamist alliance will include Iraq, as well as nations along the western coastline of the Red Sea and the southern Mediterranean, including Egypt, Ethiopia, Eritrea and Libya.

Note, however, that Syria and Lebanon are not listed in this prophesied Iran-led alliance.

Instead, Syria is grouped in the other alliance of Middle Eastern nations, described in Psalm 83: “For they have consulted together with one consent: they are confederate against thee: The tabernacles of Edom, and the Ishmaelites; of Moab, and the Hagarenes; Gebal, and Ammon, and Amalek; the Philistines with the inhabitants of Tyre; Assur also is joined with them …” (verses 5-8). As any Bible commentary will tell you, an alliance of these countries has never existed in history.

This alliance between certain Middle Eastern nations and Germany (Assur) will develop in the end time.

One of the nations mentioned, the Hagarenes, corresponds to modern Syria. In many ways, the Psalm 83 alliance is an anti-Iranian alliance.

Based on these end-time prophecies, we have forecast for two decades that Syria’s alliance with Iran is destined to end. But given how critical Syria is to Iran for establishing the Shia Crescent, it also seems that losing it will affect Iran’s ability to maintain control in Lebanon and its access to the eastern Mediterranean.

Lebanon—specifically southern Lebanon, where Iran currently has much support through Hezbollah—is also destined to be part of the Psalm 83 alliance, not the Iranian-led king of the south.

President Trump’s current policy of striking at the head of the terrorist snake could lead to both Syria and Lebanon choosing to throw off their Iranian patronage. For more on our long-standing forecast for Iran, please read The King of the South.