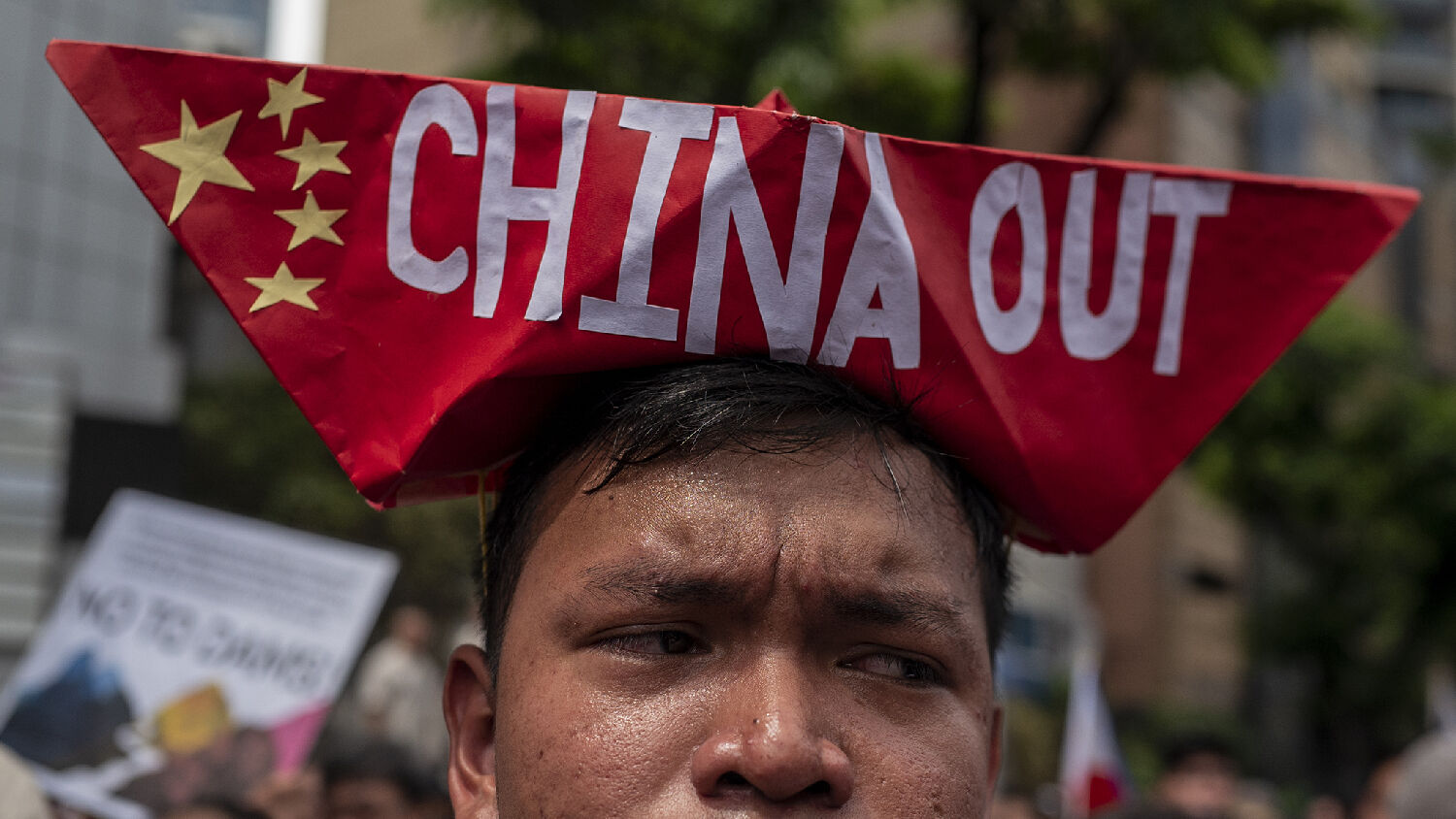 Filipino protesters march toward the Chinese consulate on April 9 in the business district of Makati, Philippines.
Getty Images

‘China is intimidating the nations of Southeast Asia into submission to its will. … Everything is headed in the direction of war.’

On the day of the incident, Philippine President Rodrigo Duterte told China to “lay off” its vessels surrounding Pag-asa Island. “This is not a warning, this is a word of advice to my friend [China],” Duterte said. “I’m asking you, I will not plead or beg but I’m just telling you lay off the Pag-asa Island because we have soldiers there. … I will tell the soldiers [to] prepare for suicide missions.”

“The presence of Chinese vessels near and around the Pag-asa and other maritime features in the Kalayaan Island Group is illegal,” read a statement from the Department of Foreign Affairs. “Such actions are a clear violation of Philippine sovereignty, sovereign rights and jurisdiction as defined under international law.”

The United Nations Convention on the Law of the Sea stipulates that waters within a country’s 200-mile Exclusive Economic Zone are part of a nation’s maritime territory. Any natural resources found within its economic zone rightfully belong to that nation. Most countries abide by this law to determine their maritime borders. But China has little regard for international law. It claims almost all of South China Sea as its own, and it is willing to use its military might to assert its control in the South China Sea.

The Chinese vessels have surrounded the areas around Pag-asa Island “in large numbers and for sustained and recurring periods, what is commonly referred to as ‘swarming’ tactics, raising questions about their intent as well as concerns over their role in support of coercive objectives,” the Department of Foreign Affairs said.

Capt. Jason Ramon, spokesperson for the Philippine Navy’s Western Command, said at least 275 Chinese vessels had been sighted around Pag-asa Island, Subi Reef and the sandbars since January. “These are suspected maritime militia,” Ramon said. “Of course, we challenge them. We warn them that they are entering Philippine territory. But almost all of them are unresponsive.”

Despite obstacles in the relationship, the Philippines will likely remain a “friend” of China as long as Duterte is still in office. Since assuming the presidency in 2016, Duterte has pursued warmer ties with China. In contrast with his predecessor, Benigno Aquino iii, who nurtured a closer relationship with the U.S., Duterte has a long-standing anti-U.S. stance. He has questioned the relevance of the Philippine-American alliance. He refused to confront China with The Hague’s 2016 ruling that invalidated China’s claims in the South China Sea. Instead, he has drawn his nation closer to Russia and China. “You know … China just wants to be friends with us. They gave us arms [and] ammunition. I went there [Beijing] because America failed to deliver what we ordered,” Duterte said on April 2 when large numbers of Chinese vessels had already been sighted at Pag-asa Island.

Trumpet editor in chief Gerald Flurry has said that China’s aggression in the South China Sea is “steering the world toward war.” In our July 2016 issue, he wrote:

Since before the Korean War, China has had a strategy to establish a security buffer extending far from its coast and engulfing the entire South China Sea. Its current military buildup in the Paracels and the Spratlys is bringing China closer to realizing this strategy.

China is forcing South China Sea claimant states like the Philippines to capitulate to its will. Mr. Flurry continued:

Since [the end of] World War ii, America protected this vital trade route and brought peace to this part of the world. Now the American military is retreating, and other great powers are coming in to fill the vacuum. …

Mr. Flurry’s analysis of the South China Sea situation is based on specific end-time Bible prophecies. Ezekiel 4 describes a time just before the Great Tribulation, an end-time period of unparalleled war and suffering. Verse 3 reads, “[S]et thy face against it, and it shall be besieged, and thou shalt lay siege against it. This shall be a sign to the house of Israel.” Regarding this scripture, Mr. Flurry wrote:

The “house of Israel” primarily refers not to Jews, but to the modern descendants of Israel, specifically the United States and Britain. Here is pictured a siege against the house of Israel.

Isaiah 23 gives more details about this economic siege. It shows that there will be a brief economic alliance between a German-led European bloc and major Asian powers. The Bible calls this Eurasian alliance a “mart of nations.” This alliance will form to besiege the modern-day nations of ancient Israel (principally the United States and Britain) economically. Mr. Flurry continued:

The Bible contains many prophecies of that European power attacking America. This is where China and the other giants of Asia enter the picture. Considering that China now possesses most of the world’s strategic sea gates (at one time held by Britain and America), the German-led Holy Roman Empire will need to form a brief alliance with the Asian powers identified in Isaiah 23 (Russia, China, Japan—the “kings of the east”). …

China’s behavior in the South China Sea is leading to the fulfillment of this prophecy. China is intimidating nations like the Philippines, with the goal of eventually cutting off America’s and other nations’ access to the South China Sea. “Soon America will find it impossible to import oil and other necessities,” Mr. Flurry wrote.