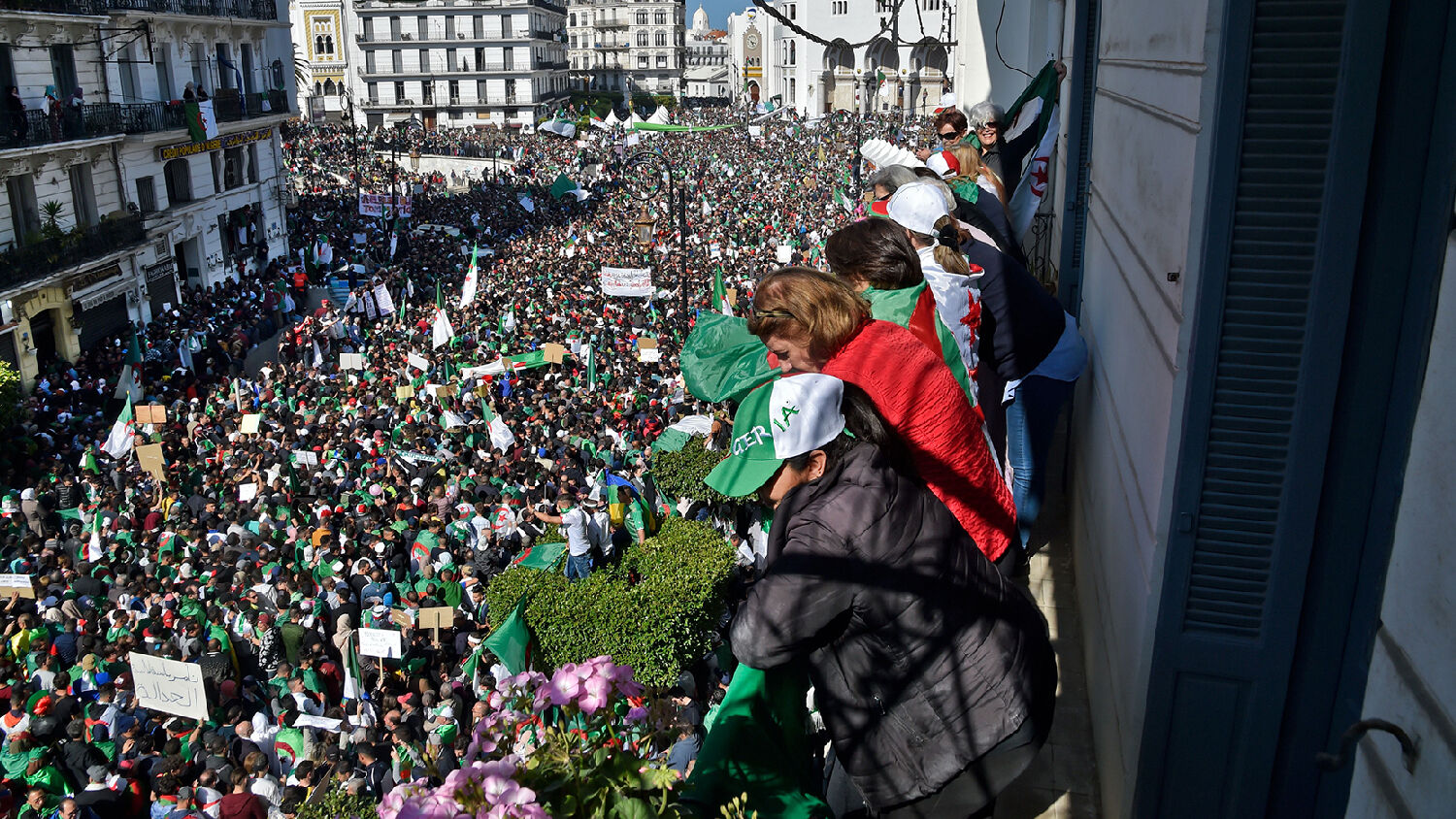 Algerians look down from a balcony at protesters gathering during a mass demonstration against ailing President Abdelaziz Bouteflika in the capital Algiers on March 29.
RYAD KRAMDI/AFP/Getty Images

One of the most memorable times working here at the Trumpet was during the fall of Egyptian President Hosni Mubarak. All across our headquarters offices, people had the live footage playing, watching the “million-man march” and subsequent waves of protests calling for the strongman’s ouster. Even before Mubarak announced his resignation, we knew we were watching history being made.

Last Friday saw another million-man march, this time in Algeria, calling for the ouster of Algerian strongman Abdelaziz Bouteflika. The turnout reported by Reuters is a huge number for a country with a population of 41 million.

This too has the potential to be a very significant event. Algeria is a huge country—larger than Greenland (though it doesn’t look like it on most maps). If it destabilizes, the echoes will reverberate around the world. Algeria is an important supplier of oil and natural gas. Can Europe cope with yet another failed and disintegrated state at its borders? With another wave of refugees pouring out of the country toward Europe? And what about the rest of North Africa, which is already struggling to contain radical Islamic violence?

Algeria has walked this path before. The Council on Foreign Relations wrote that “the country is vulnerable to the same risk it faced in 1988, when it was rocked by unexpected (and still largely inexplicable) deadly and destabilizing riots.” These riots led to the so-called “dark decade” of the 1990s, where around 200,000 died as the country fought a civil war with radical Islamists.

The Islamists are still a potent force. On Jan. 16, 2013, Algerian Islamists gained the world’s attention when they seized a natural gas facility, taking 700 Algerian workers and over 100 foreigners hostage.

“When Bouteflika goes, Algeria will probably implode,” warned Stephen Pollard at the Spectator in 2016. “The Islamists who have been kept at bay by his iron hand will exploit the vacuum. Tensions that have been buried since the civil war will reemerge. And then Europe could be overwhelmed by another great wave of refugees from North Africa.”

“An Algerian civil war would create huge numbers of refugees,” he continued. “One analyst told me he expects 10 to 15 million Algerians will try to leave. Given Algeria’s history, they would expect to be rescued by one nation: France. In its impact on the EU, even a fraction of this number would dwarf the effect of the Syrian civil war. Given the political trauma that the refugee crisis has already caused in Europe, a massive Algerian exodus could cause tremendous insecurity.” The resulting crisis, he warned “could destroy the EU.”

And now, Bouteflika is heading out the door.

The latest round of protests began in February, after Bouteflika announced that he would be standing for a fifth term in elections to be held on April 18.

Bouteflika is a dictator, but he is widely credited for bringing peace to the country and keeping out the radical Islamists. However, he suffered a stroke in 2013, and is rarely seen in public. He is generally believed to be incapable of ruling, and Algerians complain about being governed by a photograph or a ghost.

Humiliated by this charade of democracy, hundreds of thousands took to the streets. On February 22, the capital Algiers saw its largest demonstrations in nearly 18 years. Since then, protests have been repeated every Friday, with the March 29 protests being the largest yet.

Already the army is starting to ease Bouteflika out of power. On March 26, Army Chief of Staff Amed Gaid Salah called for Bouteflika to be formally declared unfit to rule and removed from office. The army says that it supports the “legitimate demands” of the protesters. The Algeria press service reported this week that Bouteflika will step down by April 28.

But this isn’t enough for many of the protesters, who want to do more than change the figurehead atop the regime. On Friday, one banner stated, “We want Salah to go,” referring to the military chief. Opposition leader Sofiane Djilali said that Bouteflika’s exit is not enough, “The whole system has to go.”

“Bouteflika you go, take Gaid Salah with you,” chanted protesters.

The protesters know their country’s history; they know there are risks. Kamel Daoud, a columnist for an Algerian newspaper, told the Atlantic, “I have a lot of hope as an Algerian. I’m also very worried that the Islamists might steal our revolution, but I think we still need to try … we need to take the risk.”

It’s a risk the whole world is watching—and one you should be watching too.

“Watch Algeria!” was the title of a 2013 article by Trumpet editor in chief Gerald Flurry. He wrote:

Northern Africa is turning into a battleground with enormously important prophetic implications.

Terrorists seized a natural gas facility in Algeria on January 16. The next day, Algerian authorities stormed the facility, killing 29 terrorists. At least 38 foreign workers were also caught in the melee. Authorities captured three of the terrorists, and were able to gain a lot of information from them.

These terrorists are sponsored, for the most part, by Iran. Iran has designs on being the strongest power throughout the region, and is extending its reach throughout North Africa.

But Iran isn’t the only one interested in Africa. Germany is making strong inroads as well. Both of these powers are racing to get as much control of North Africa as they can. They will inevitably clash with each other.

Bouteflika has been sick for a long time, and it’s been clear that there would have to be a handover of power one day. And this could give the Islamists a chance. The military has been preparing. It increased its arms imports by 55 percent over the last five years. Despite being a relatively poor country, it is the world’s fifth-biggest arms importer. And it is Germany’s largest arms customer outside of nato.

It is making sure it has the arms to take on the Islamists.

In that 2013 article, Mr. Flurry described the spread of radical Islam backed by Iran. But he wrote that the radicals “are beginning to face some opposition from Germany and the European Union. Algeria has a strong supporter in Germany. That is going to make a big difference for these terrorist groups.”

Algeria is Europe’s fifth-largest gas supplier. Spain depends on Algeria for half of its natural gas needs. “Do you think Germany will sit back and do nothing while terrorists take over Algeria?” asked Mr. Flurry. “I think you’re going to find Algeria getting a lot of help from Europe, especially Germany. With all that fuel coming from Algeria, you know Europe and Germany must be very concerned.”

You can guarantee the Islamists have also been preparing. “When President Bouteflika goes, it is clear that the Islamists—propelled by their brothers outside Algeria—will attempt to seize the day,” wrote Pollard. “Although you will struggle to find any mention of Algeria and its likely future direction in the press, European governments have been reflecting for months on what looks like a brewing crisis.”

Mr. Flurry forecast in that 2013 article that Europe and radical Islam would clash increasingly often in North Africa. The EU now has major military missions in Mali and the Central African Republic, and it is trying to organize a local force comprised of allied African nations to fight radical Islam.

Those clashes are a precursor to a major event prophesied in your Bible. “Daniel 11:40 speaks of a war between ‘the king of the south,’ which we can prove to be Iran and radical Islam, and ‘the king of the north,’ which we know to be Germany leading a group of nations,” wrote Mr. Flurry. “A great prophecy of your Bible is about to be fulfilled! You need to watch what is happening in the Middle East and Africa!”

“The Daniel 11:40 clash between the king of the south and the king of the north is about to be fulfilled!” he concluded. “All of this violence in Africa is just a prelude to the fulfillment of this prophecy.

“Monitor these events closely and see if what we’re telling you doesn’t come to pass. So many prophecies already have. Never in mankind’s history has so much prophecy been fulfilled so rapidly! Events are racing along. This is not the world you knew 10 or even five years ago. It’s very different.”

Daniel 11 is your road map to the future of the Middle East. It foretells the clash between radical Islam and Europe—a clash that could soon break out in Algeria if radicals use this opportunity to try and push out the European-supported military. It also forecasts a radical change in Egypt’s direction, as Trumpet staff writer Anthony Chibarirwe outlined today. It says that all these events are stepping-stones toward an even wider and more destructive conflict. But most importantly, it says they are stepping-stones on the road to the return of Jesus Christ.

So keep watching Algeria. And to understand this road map of the future, read Mr. Flurry’s free booklet The King of the South. It will help you prove exactly what the prophecy in Daniel 11 refers to. It will show you how much of this prophecy has already been fulfilled. And it will show the hope behind the headlines from a part of the world that often generates so much bad news.