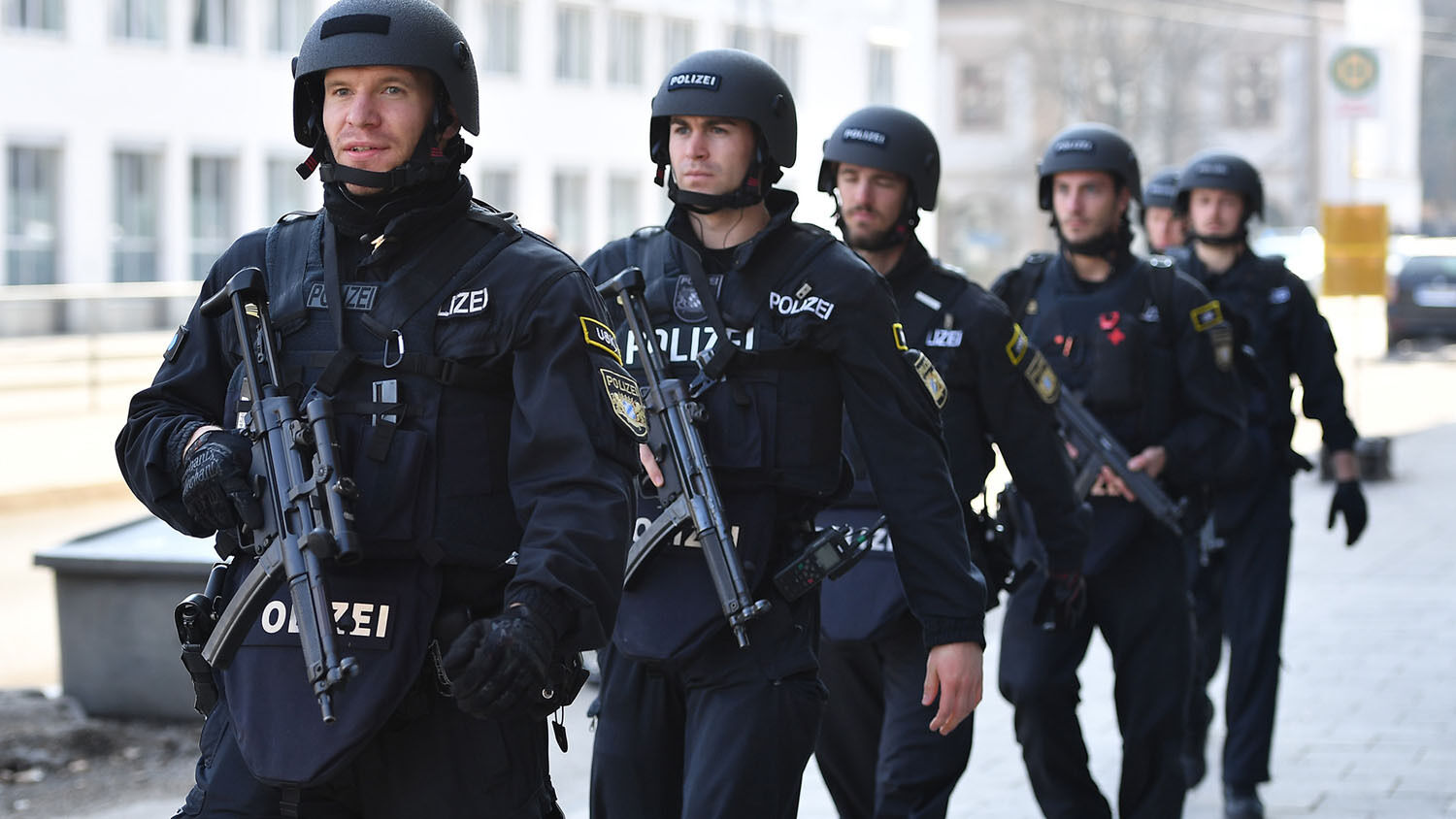 Police stand near the site where a man reportedly shot dead another man and then himself on February 21 in Munich, Germany.
Lennart Preiss/Getty Images

Germany’s security landscape is changing to resemble its worst history.

Across Germany, states are changing their police laws. Police officers are receiving increased authority not seen since World War ii. The governments speak of false fears, but the changing laws remind many of Germany’s darkest history.

On May 14, the German states of Lower Saxony passed through parliament an amended police law. Bavaria, Saxony and North Rhine-Westphalia have already amended their police laws to assign more power to the police. While advocates for increased policing power did not successfully push through all their demands, the bills that were successfully passed are frightening enough.

The state that triggered this chain reaction in German domestic security was Bavaria.

On May 10, 2018, more than 30,000 citizens marched in the streets of Munich to protest the bill. Citizens declared: “Welcome back to 1933.” Activists warned of a rising police state. But the government characterized their views as “lying propaganda” and passed the bill anyway.

Since 2017, the German Army (which was banned from German streets after 1945) is again practicing with the police—allegedly for the purpose of training to respond to terrorist attacks. But this is not enough. The new Law Enforcement Act (Polizeiaufgabengesetz, pag) now equips police officers with army equipment: Special task forces in Munich and Nuremberg can now legally carry hand grenades and explosives.

Even more concerning is that the law expands the police’s surveillance capacities. Margit Wild of the Social Democrats in Bavaria warned that the law massively invades the personal rights and freedoms of citizens. “You can no longer draw a border between the police and the secret service,” she said.

“Anyone could get caught in the investigators’ crossfire if he is in the wrong place at the wrong time,” the Bavarian Mittelbayerische newspaper reported (Trumpet translation throughout). Munich District Court Judge Markus Löffelmann warned the state parliament of a “violent paradigm shift” that extends the police’s power for much more than just preventing terrorist attacks.

Handelsblatt noted: “In Bavaria, the 110 pages of new rules allow police to use drones to conduct surveillance of suspects, use body cams in suspects’ homes, and covert agents to gather information. It also allows for indefinite detention, while previously the police could hold a suspect for only 14 days.”

The Bavarian police have now been given “unprecedented power … to levels not experienced in former West Germany since the Nazi regime,” the Local reported at the time. Authorities don’t deny that the police powers are vastly extended: The facts are indisputable. However, Bavarian Interior Minister Joachim Herrmann claims the new measures should be seen as “protection law and not a surveillance law.”

Thousands of Germans have voiced their fear of seeing 1933 repeat itself. The laws passed in 1933 did not suddenly create a police state, but bit by bit, they ultimately allowed leaders to exert total control over the citizens by using law enforcement agents. The power of security forces over the people was part of Adolf Hitler’s rise and reign. Germany’s Gestapo oppressed political opponents, forced citizens into dreadful fear and obedience, and, ultimately, contributed to the deaths of millions. The Gestapo rightly deserves the dreaded reputation its name connotes today. But could it happen again?

The fact is, modern technology offers surveillance methods that the police and secret services of the 1930s only dreamed of.

The people’s fear of a repeat of 1933 is reflected in a prophecy in Revelation 17: “The beast that thou sawest was, and is not; and shall ascend out of the bottomless pit, and go into perdition: and they that dwell on the earth shall wonder …” (verse 8). In Germany and the Holy Roman Empire, Trumpet editor in chief Gerald Flurry explains that the Nazi empire will rise again from the “underground.”

The men and women who craft and pass Germany’s new police laws may not be fully aware of where their actions are leading. But in a very direct way, they are contributing to a process that will lead to the fulfillment of this prophecy. German lawmakers may sincerely believe that these laws will bring more safety. But could these laws enable and sustain the rise of another German dictator?

Concerning the tens of thousands of protesters who warned of a reemergence of the Nazi regime, Bavaria’s interior minister said that they were falsely alarmed by media reports. “Above all,” Herrmann said, “I am surprised that sometimes the lying propaganda of the past few weeks has seemingly also led some naive people astray.”

Are they naive to fear a repeat of 1933? Or are they informed by history? Let’s look at the facts.

According to the new Bavarian law, the police can now monitor individuals and take preventative actions if an “impending danger” exists. The term “impending danger” is not specifically defined, and that is exactly the point of it. It grants police the power to intervene in cases where they previously couldn’t. The Local explained that this change “will give the Bavarian police the power to take action when a threat of danger is perceived, not only when a real and present danger is identified (konkrete Gefahr).”

Herrmann countered: “It is sheer nonsense that we want to convert the Bavarian police into a secret police and the free state into a surveillance state.”

But can we take his word for it?

The fact that Germans are concerned of another police state should alarm the whole world! But most have never even heard about their concern.

According to the Bavarian law, individuals can now be arrested without a warrant if such an “impending danger” exists. Deutschlandfunk wrote on July 12, 2018: “Locked up for weeks without filing a report or the assistance of a lawyer? After Bavaria’s controversial new police task bill (pag), it is possible. In reference to the new law, several refugees were arrested after turmoil at a shelter in Schweinfurt.”

After the incident, 10 refugees were arrested. A charge was filed against one of them, but the other nine were arrested without a warrant and held for two weeks. According to the new law, this “deprivation of liberty” can last for three months, even in the absence of evidence to file a charge, and can “be extended by a maximum of three additional months at a time” if a judge approves.

Flashback to Germany’s Past

There is a reason why Bavarian protesters held up a sign that read, “Welcome Back to 1933.” In 1933, Nazi officers were enabled to arrest citizens in protective custody without warrant and indefinitely. In An Illustrated History of the Gestapo, Rupert Butler wrote:

The so-called “Emergency Laws of February 28” were promulgated “for the defense of the people and the state.” This amounted to total abolition of personal freedom. The police were armed with full authority to search and arrest without warrant and were empowered to take people into “protective custody” indefinitely without filing charges or bringing them before a judge.

Due to strict gun laws in Germany, the gulf between the police’s power and those of the German citizens is growing bigger. We are seeing the resurgence of the same methods used by an empire that we hoped was dead.

A Glimpse Into Germany’s Future

One might wonder, if all this is allowed under the moderate administration of Chancellor Angela Merkel, what will happen if a more forceful leader wins control of Germany?

The Bible answers this question in vivid detail. Not only does it prophesy of a drastic change in Germany’s government, but it also describes its consequences. Revelation 13 prophesies of the final resurrection of the Holy Roman Empire. As in times past, the citizens will be suppressed and forced to take on a mark. The late Herbert W. Armstrong wrote:

Yes, the mark of the beast once again will be enforced! No one will be able to hold a job or engage in business without it. Those refusing will once again be tortured and martyred—probably by the secret police of the political state—but at the behest of the church!

Enforcing this loyalty to the empire requires some form of powerful police, controlled not by representatives of the citizens in local governments but by the top leaders of the regime. The mark of the beast discussed in Revelation 13 has a lot to do with gaining control over people. In many ways, whether they realize it or not, German police are gearing up to gain the power to enforce that mark. However, the people who contribute to the reemergence of this police state may not be fully aware of where it will end. The Bible reveals that Satan is behind the rise of this evil empire, using men receptive to his influence (Ephesiens 2:2).

The history of man has been dominated by tyrants and dictators. But we are about to see the rise of the most ruthless dictator this world has ever seen. Daniel 8:23-24 read, “And in the latter time of their kingdom, when the transgressors are come to the full, a king of fierce countenance, and understanding dark sentences, shall stand up. And his power shall be mighty, but not by his own power: and he shall destroy wonderfully, and shall prosper, and practise, and shall destroy the mighty and the holy people.”

A more horrifying regime than the Nazi empire is rising, and it will use similar methods. The good news is that man’s rule over man is about to end! Just as God prophesied the resurrection of the old Nazi empire, He has also prophesied that He will put an end to it—forever!

Germany’s evil dictatorial rule will end and will be replaced by God’s rule! Fulfilled prophecies prove that God’s rule is about to come! Request your free copy of Who or What Is the Prophetic Beast?, by Herbert W. Armstrong, to learn what that mark consists of and how it will be enforced.