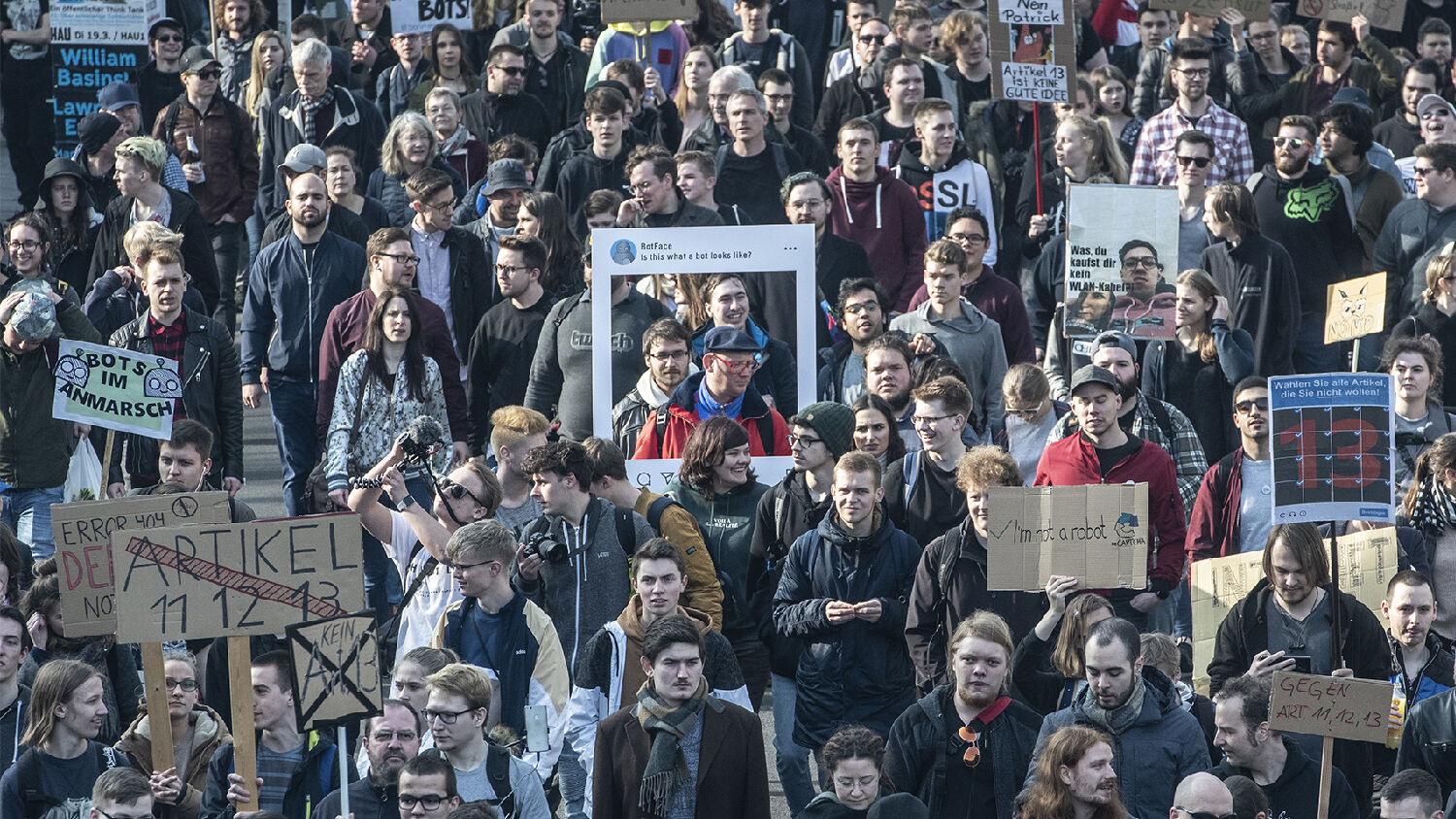 Thousands of people demonstrate against the planned EU copyright reform and possible upload filters. Shortly before the decisive vote on the reform of copyright in the EU Parliament, thousands in Europe protested against the project.
Getty Images

After months of talks, votes, consolations, protests and petitions, the European Union finally did it. The EU Parliament today passed one of its most controversial pieces of legislation in its history.

Inventor of the World Wide Web Tim Berners-Lee, cofounder of Wikipedia Jimmy Wales and 70 other Internet pioneers signed an open letter to the president of the European Parliament warning that it was about to pass a directive that was “an imminent threat to the future” of the Internet. Over 5 million people signed Change.org’s largest-ever petition to try to get the EU to reconsider. Hundreds of thousands turned out to protest last weekend.

None of that mattered. Today, the European Parliament passed its new Copyright Directive, its largest-ever attack on a free and open Internet.

The controversy centers around two articles of the directive, both of which are far more important than they at first seem. Protecting copyright holders is sensible. But the EU’s directive paves the way for what European Digital Rights calls a “censorship machine.”

Article 11 of the EU Copyright Directive is the “link tax.” Individuals and organizations who post information to websites commonly quote other publications. Here at the Trumpet, we often quote a few sentences from an outstanding article, and give readers a link to the full article. As a writer, I love it when others link to my articles. It means a wider audience comes and reads my work.

The EU wants to put a stop to this. Anyone quoting beyond just a few words will have to pay a fee to the creator. The result? Fewer people share articles, and the creator ends up worse off.

Germany and Spain both tried this, and it proved unworkable. Experts predict the directive will lead to the Internet becoming more dominated by a small number of giant companies. It is just too time consuming to reach agreements with lots of small news sites to allow you to quote them. It is easier for a few big media companies to strike agreements with each other. This leaves smaller sites to die without the oxygen of publicity.

Worse, Article 11 can be used to clamp down on criticism. For example, last year Trumpet executive editor Stephen Flurry and I wrote an article exposing a New York Times story that told a bunch of ridiculous lies about life in the United Kingdom. We quoted the New York Times and compared it with reality. Under Article 11, the New York Times could forbid us from quoting its content. It’s pretty hard to prove someone is lying if you can’t quote what he said.

Already the system is pretty clunky. Most of the scanning for copyright violation is done by computer programs. If you upload content to YouTube regularly, you’re familiar with the pattern. A program will flag your content as copyrighted, and YouTube will automatically take it down. Then you have to get together a bunch of paperwork to show YouTube that your content is actually not copyrighted, or that you have the rights to use it.

The EU wants to make it even more restrictive. Everything that goes up on YouTube, Facebook, Twitter, etc will have to be checked for copyright violations before it is posted. Around 400 hours of video are uploaded to YouTube every minute. Over the same time period, Facebook users upload 240,000 pictures, like 3.1 million posts, and send 31 million messages. Scanning all of that for copyrighted content is humanly impossible, so it must be delegated to a computer program.

Again, this isn’t so bad for Internet giants. Google and Facebook can afford to spend millions creating contact filters—YouTube has already poured $100 million into its ContentID system for helping track down copyrighted material. But smaller websites? Not a chance. They’ll probably end up paying Google to do the filtering for them.

Meanwhile, websites will face big penalties if they fail to block copyrighted content, but small or no penalties if they mistakenly block content that should be allowed. They will err on the side of caution. Expect parodies, memes and other innocent content to be blocked.

Europe is pushing the world toward an Internet where all content is filtered before it’s uploaded.

At first, that filtering may just be for copyrighted material. But once the filters are in place, how long before the EU demands the filters be tweaked to filter out “hate speech” and any other speech it doesn’t like? And who trusts the EU to decide what should and should not be allowed?

This is why Tim Berners-Lee and his fellows warned that “Article 13 takes an unprecedented step towards the transformation of the Internet from an open platform for sharing and innovation, into a tool for the automated surveillance and control of its users.” Diego Naranjo, senior policy adviser at European Digital Rights, warned that “Article 13 of the Directive sets a dangerous precedent for Internet filters and automated censorship mechanisms—in the EU and across the globe.”

This is not about copyright protection. EU Commission spokesman Margaritis Schinas tweeted that with this rule, the EU “takes back control” of the Internet. That’s what this is all about: “control.” The “back” is wrong—the EU never really controlled the Internet, but it has always wanted to.

Control is in the EU’s makeup. Part of the reason Britain wants out of the EU is because of the way the EU pass laws regulating every walk of life.

The directive may sound bad, but it is still some time away from being implemented. European leaders have already signed off on the directive, but they need to approve it one more time before it becomes official. It’s possible—though unlikely—that one of them could change his mind. Then, it will be up to each country to pass its own law that implements the directive by 2021. Part of the directive’s problem is that it is very vague. It will be up to national parliaments to determine, for example, exactly how long of a quote one can use from another site without paying a fee.

So there’s still time for the directive’s many opponents to push back—though it would be very hard to overturn. What is most concerning, however, is the intent. Regardless of how far this law goes, we’ve seen what EU leaders want. They want to pull out all the stops, ignore all the experts and massive public opinion, in order to gain more control.

TheTrumpet.com managing editor Brad Macdonald wrote about the EU’s efforts to regulate the world last year. He showed how the behavior of these leaders ties in with a key, and famous, Bible prophecy. He wrote:

So what does all this mean?

Even the most distant observer of Bible prophecy has heard the term “mark of the beast.” This mysterious “mark” is mentioned multiple times in the book of Revelation. All sorts of conspiracy theories exist about exactly what this “mark” is, but there is no need for theorizing. The Bible plainly reveals that the “mark of the beast” is Sunday worship. You can prove this by reading Who or What Is the Prophetic Beast?, by the late Herbert W. Armstrong.

For now, let’s notice Revelation 13. In verse 11, the Apostle John says, “And I beheld another beast coming up out of the earth; and he had two horns like a lamb, and he spake as a dragon.” This beast is also pictured in Revelation 17; in this chapter, she is the woman (church) who rides the seven-headed, 10-horned beast, known today as the Holy Roman Empire. These prophecies forecast the end-time formation of a German-led, Catholic-inspired European superstate. Mr. Armstrong often referred to this end-time entity as the coming “beast power.” You can study this further in our free book The Holy Roman Empire in Prophecy.

Now notice Revelation 13:16-17. Talking about this European beast power, John writes, “And he causeth all, both small and great, rich and poor, free and bond, to receive a mark in their right hand, or in their foreheads: And that no man might buy or sell, save he that had the mark, or the name of the beast, or the number of his name.”

Notice, this European beast power has a dictatorial global presence (Revelation 17 and 18 prove this too). It has power over “both small and great, rich and poor, free and bond.” Notice too, the beast power has the influence and power to dictate who is allowed to “buy and sell,” in other words, to trade, to practice commerce and industry. The seventh and final resurrection of the Holy Roman Empire is going to have tremendous regulatory and financial power. It’s going to regulate global business and industry, trade and commerce.

Verses 16-17 clearly show that if people don’t accept this “mark”—if they don’t follow Europe’s rules—they will not be allowed to conduct business with this powerful and wealthy European superstate. Does this sound familiar? In spirit, this is what has already happened with the gdpr [General Data Protection Regulation]. It’s happening with the imminent EU copyright directive. The message behind both these initiatives is clear: Do business our way, submit to our rules, or we will shut you out of our market. We have yet to see the literal institution of the “mark of the beast,” but the EU today is operating in the spirit of the mark of the beast!

With the new copyright directive, the EU is setting up the infrastructure to control what people say online, and shut down its critics. “The Copyright Directive will create two internets,” wrote Matthew Lesh. “The first, a heavily censored version for European users, including filters to prevent you from uploading content. The second, a free internet where creativity is encouraged, for everyone else.”

The EU would love such a filter system. Mr. Macdonald concluded his article writing:

Isn’t this electrifying? The EU right now doesn’t feel like an autocratic, imperialist power. It doesn’t feel like an invasion is underway. When one sees Jean-Claude Juncker shuffling behind the lectern, one isn’t exactly paralyzed with fear. The EU looks and behaves like a sprawling, unwieldy, bureaucratic mess. And it is, at least in many respects. But it is this perception that makes the EU so dangerous; it is so easy to misread and underestimate. Remember, the beast of Revelation 13:11 looks like a lamb, but speaks and behaves like a dragon.

The beast power is rising. Europe’s power and influence is growing. For now, it’s not using tanks and aircraft carriers. Instead, it’s growing its power by creating long documents filled with complex, boring legislation. It’s called regulatory imperialism, and Europe has mastered it.