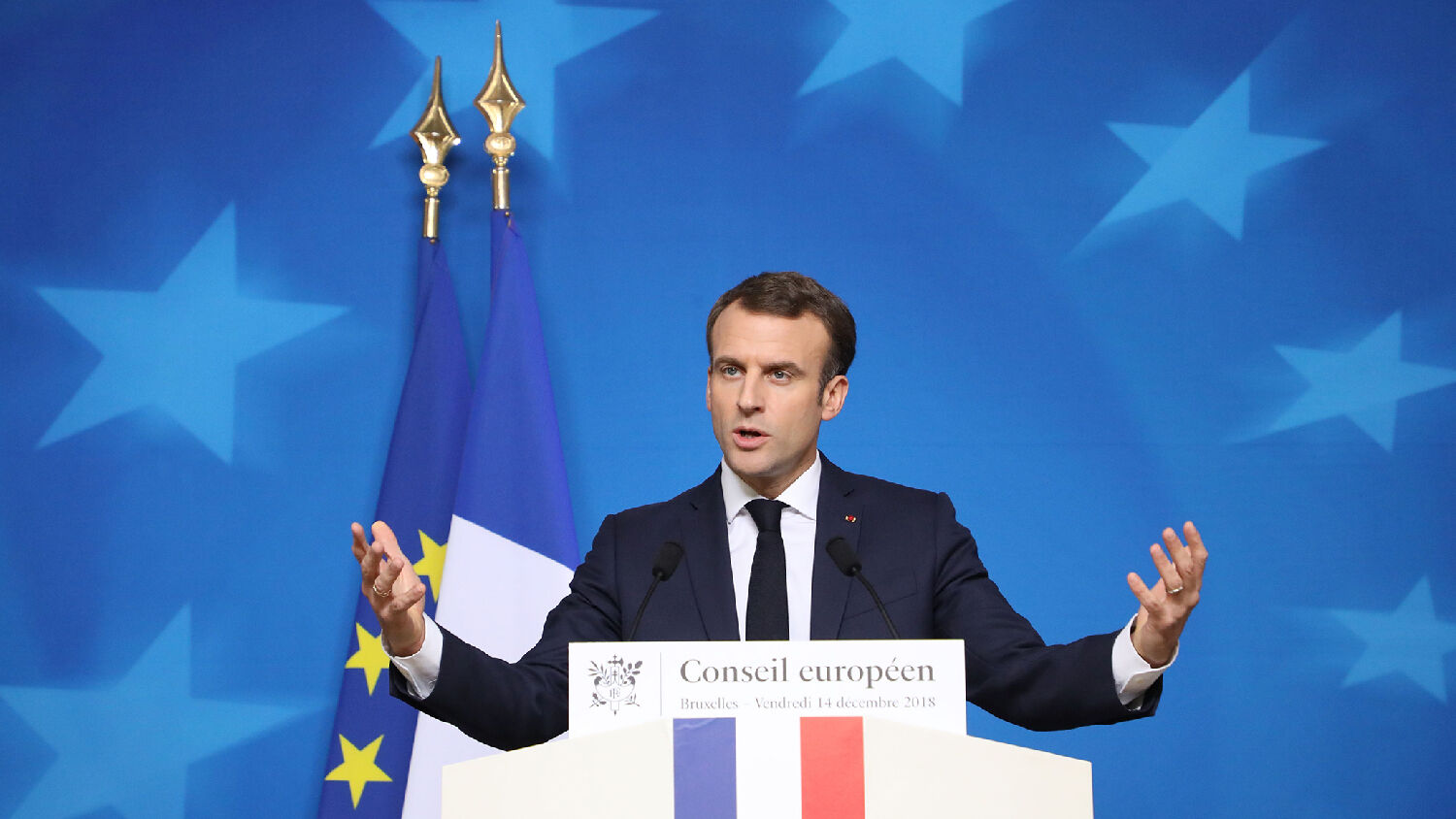 French President Emmanuel Macron addressed citizens of the European Union directly this week with his plea for a stronger Europe. On March 4, citizens of all 28 European member states could read an article authored by Macron in at least one of their leading newspapers.

“Citizens of Europe,” Macron wrote, “if I am taking the liberty of addressing you directly, it is not only in the name of the history and values that unite us, but because time is of the essence. A few weeks from now the European elections will be decisive for the future of our continent.”

Citizens of Europe, I am addressing you because time is of the essence.⁰⁰https://t.co/XwXYs8XWVN

Macron then addressed the issues currently plaguing the EU. He blamed Britain’s decision to leave the Union on the EU’s failure “to respond to its peoples’ need for protection from the major shocks of the modern world.” He also said that no one warned the British of the weight their decision would have.

Macron did not address Britain’s desire to leave because of how Macron and others want to transform the EU.

“We are at a pivotal moment for our continent,” Macron continued, “a moment when together we need to politically and culturally reinvent the shape of our civilization in a changing world.”

Macron pleaded for a political and cultural renewal. He believes that Europe is united by its “history and values.” The history he is referring to is that of the Holy Roman Empire, which ruled Europe for centuries and shaped the Continent’s political, religious and cultural identity. The urgency of the times is leading Macron to plead for concrete steps to renew Europe’s commitment to that history.

His specific demands include an agency to defend democracy, a common border force, increased defense spending, an operational mutual defense clause, a European security council, reforms in the EU’s competition and trade policies, an EU minimum wage and a European climate bank.

His call “to regulate the digital giants” and “finance innovation by giving the new European Innovation Council a budget on par with the United States” could be seen as declaration of war against U.S. President Donald Trump.

In his concluding paragraphs, Macron wrote:

So by the end of the year, let’s set up, with the representatives of the European institutions and the member states, a conference for Europe in order to propose all the changes our political project needs with an open mind, even to amending the treaties. This conference will need to engage with citizens’ panels and hear academics, business and labor representatives, and religious and spiritual leaders. It will define a road map for the European Union that translates these key priorities into concrete actions. There will be disagreement, but is it better to have a static Europe or a Europe that advances, sometimes at different paces, and that is open to all?

Notice that Macron wants to involve Europe’s religious representatives and is willing to leave some member states behind that are unable or unwilling to follow this direction. This is a drastic change from the way the EU has been led thus far. The EU’s biggest critic is leaving the Union through Brexit, but EU leaders still face a few obstacles slowing down Europe’s progression.

Abolishment of the EU’s Dogma of Unanimity

The EU’s current decision-making process relies on a policy of unanimity, particularly regarding important issues such as accepting new member states, creating EU treaties, and determining foreign and security policies. Many of Macron’s ideas have been around for years, but this unanimity policy has slowed down or prevented their implementation.

“As long as we still have the rule of unanimity, you do not have to be surprised if you don’t get ahead,” former German Defense Minister Karl-Theodor zu Guttenberg told the Swiss handelszeitung.ch, posted on February 4. “As long as this doesn’t change, one can talk all one wants about a European army” (Trumpet translation throughout).

Stratfor noted in May 2018 that this rule is the reason the EU’s ability to authorize sanctions and military deployments “is often slow and is subject to long debates where countries threaten to use their veto power, and policy decisions are watered down.”

German Member of the European Parliament Manfred Weber, who is running to replace Jean-Claude Juncker as EU commissioner, said, “We need to make faster decisions in those areas that are particularly important for Europe now—such as foreign and security policy. For example, I would get rid of the unanimity vote in foreign affairs. But that requires changes to the EU Treaty.” But the problem with changing the EU Treaty is that it also requires a unanimous vote from each member.

If Europe’s rule of unanimity changes to a majority vote, member states would lose their veto power. Despite this, other leaders are making similar demands. Austrian Chancellor Sebastian Kurz is frustrated that Europe’s common border force falls far short of his aspirations. He too has concluded that the EU must abandon its principle of unanimity.

Former German Finance Minister Wolfgang Schäuble has also been frustrated by Europe’s lack of progress. In February, he demanded the end of the unanimity rule before the EU’s next election. Die Welt reported: “In Europe, the slowest [member] sets the pace. That is why Bundestag President Schäuble is calling for an end to the unanimity rule for EU decisions before the European elections—and also specifies conditions for an EU finance minister.”

Schäuble is addressing yet another hot topic in EU affairs: its budget. The budget is subject to endless debates, and EU visionaries’ efforts to move the Continent ahead have been fruitless. Getting rid of the unanimity vote and allowing fewer nations to make the important decisions would speed up progress significantly.

All Hinges on Germany

“I would like to see future-oriented impulses from Berlin as far as the ideas of a stable Europe are concerned,” Guttenberg said. “Such a concept has been extensively expressed in recent years only by French President Emmanuel Macron. He has received little more than thunderous silence from Germany.”

The success of Macron’s reform plans hinge primarily on Germany’s response to them. The problem is that no one in Germany currently knows how to respond to Macron’s pleas, or they lack the courage and power to act.

Germany is Europe’s most powerful economy, its most populous country and most assertive policymaker. If we liken France and Germany as the parents of modern Europe, everyone knows who has the final say. France can talk all it wants, but if Germany doesn’t drive the course, no one will move.

Daniel 8 and Revelation 17 prophesy that Germany will get a strongman who will use the nation’s position in Europe to turn the EU’s rule of unanimity into a tenet of German dictates. EU leaders, frustrated by the EU’s weaknesses and alarmed by major global challenges, will accept those dictates for the sake of a progressive Europe. Those who reject German leadership will be excluded from the Union.

A prophecy in Revelation 17 tells us that the EU will be pared down to 10 nations or groups of nations that move forward, united in a common cause. “And the ten horns which thou sawest are ten kings, which have received no kingdom as yet; but receive power as kings one hour with the beast. These have one mind, and shall give their power and strength unto the beast” (verses 12-13). Verse 1 shows that these nations will be guided by a woman, the Bible’s symbol for a church, in this case the Roman Catholic Church. We are beginning to see how the EU will be pared down and how this religious institution will be brought back into the driver’s seat.

Verse 13 says that these 10 nations will give their power over to one leader, who will dictate their course. We believe this leader is Karl-Theodor zu Guttenberg. For more information on how he matches these prophecies, request a free copy of our booklet A Strong German Leader Is Imminent or read it online.

Much of what France is proposing today, Germany will dictate tomorrow.

Asked if he would favor a core Europe, Guttenberg said, “The expression ‘core Europe’ sounds exclusive. I am very much in favor of a Europe that has concentric circles, giving the ‘smaller ones’ more leeway.” His proposal may seem to favor everyone, giving smaller nations “more leeway.” But in reality, this means that those that do not follow Germany’s dictate, or are unable to keep pace, will find themselves excluded from the stronger union.

If this massive trade deal is finalized this year, then I believe we will see the current 28-nation European Union pared down to the prophesied 10-nation superpower this year as well. Before Europe can be closely tied to Latin America, something will have to change. The current politically and religiously disunified EU will have to become a politically, militarily and religiously unified Holy Roman Empire. Latin America is already quite united in its religion; the Holy Roman Empire will have to become united in its religion as well. And the only way to remove the division is by reducing that union to 10 nations. It is prophesied to happen (Revelation 17).

2019 could be the year when we see these dramatic prophecies fulfilled.

Whether you live in Europe, the U.S., Britain or elsewhere, these calls in Europe should greatly alarm you. But they should also give you great hope. Hope in the fact that the Bible’s prophecies are true and that it is God who rules in the kingdom of men. Mr. Flurry’s free booklet Daniel Unlocks Revelation explains in detail what is prophesied to happen in Europe. It also explains why these events must occur.