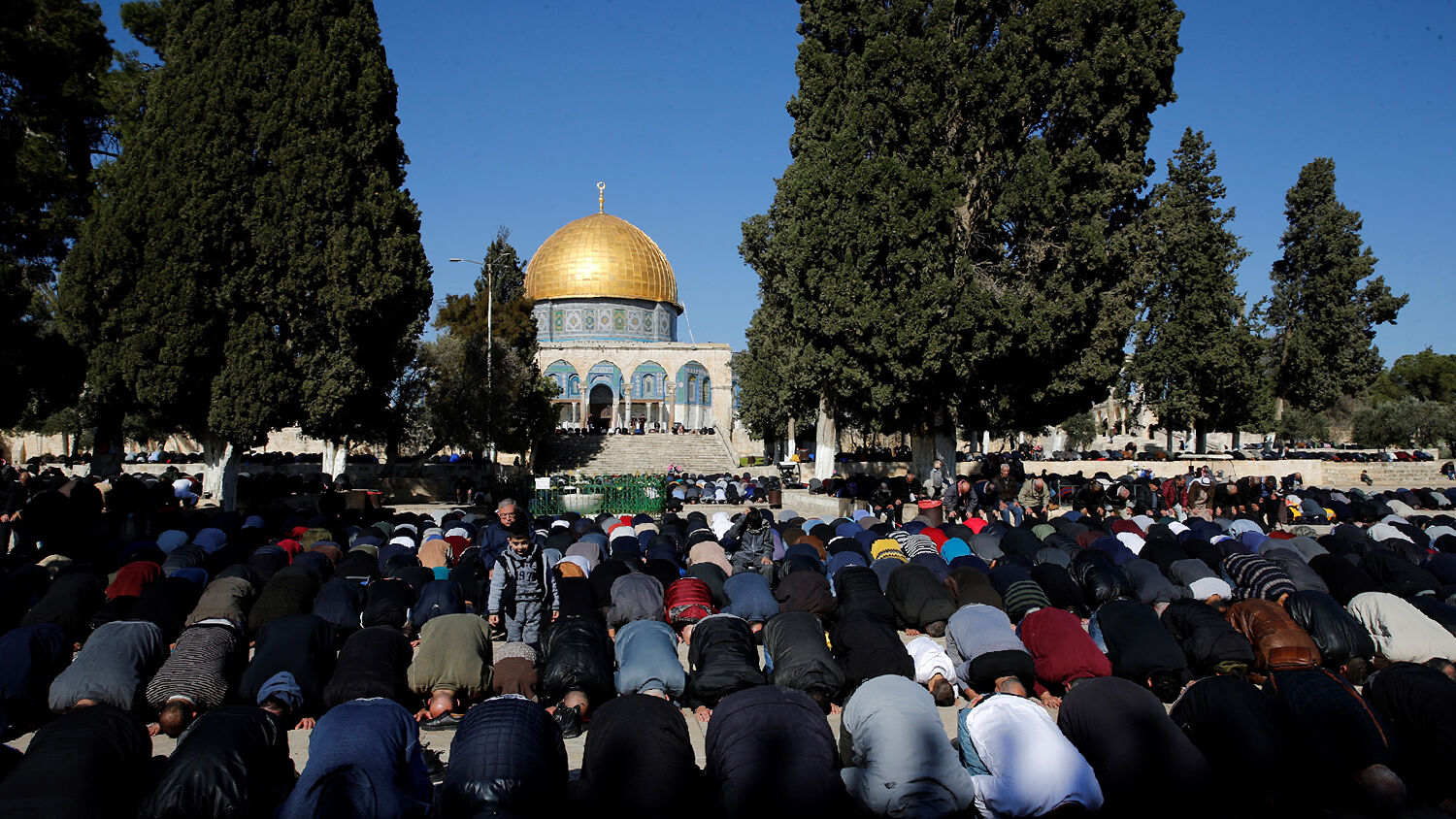 The Gaza Strip and the West Bank are ready to explode. Will the brewing Temple Mount crisis be the match?

jerusalem
While most of Israel’s media is busy debating how last week’s announcement by Attorney General Avichai Mandelblit to indict Prime Minister Benjamin Netanyahu on bribery charges could influence the April 9 election, there is a bevy of immediate security threats converging on the state that would otherwise be headline news.

These threats to Israel inside the West Bank and on the Gaza border could seriously affect the outcome of Israel’s vote and events beyond, especially if supercharged by the mass protests that are ready to erupt on the Temple Mount.

On Tuesday, Egyptian mediators entered the Gaza Strip bringing a message from the Israeli government to Palestinians: Stop the increased violence on the Gaza border, or Israel will respond more forcefully.

Over the past four days, Arabs in the Gaza Strip have fired several explosive devices over the border. Two of these have exploded inside neighboring Jewish communities, but no one was injured. In response, Israel has struck multiple Hamas targets in Gaza.

According to the Lebanese Al-Akhbar newspaper, the Egyptian delegation told Hamas that “creating tensions on the border by launching incendiary balloons will bring the idf [Israel Defense Forces] to launch a broad military confrontation in the strip.” Previously, the idf confirmed that it had recently approved operational plans for war, including “setting up a centralized administrative unit to prepare a list of potential targets in Gaza in case a war should break out.”

The Egyptian delegation also warned Hamas not to try and use an increase in violence to “intervene in the elections in Israel or try to influence them.”

Despite the Egyptian pressure, Hamas leader Ismail Haniyeh said Hamas does not fear increased Israeli military action. “If the (Israeli) occupation or Netanyahu think of an adventure, I think they will pay the price that will send them away,” he said on Monday. “We do not fear any adventures from Netanyahu towards Gaza …. The resistance has its eyes open.”

And that resistance is ready—not only in Gaza, but also in the West Bank.

“Every day that passes without a broader escalation in the West Bank is a happy surprise,” Army officials said this week, as reported by Haaretz.

According to data released from Israel’s Shin Bet intelligence agency, that escalation may be upon us, as there has been an increase in attacks in the West Bank over the past few months: 109 occurred in October, 116 in November, 138 in December and 138 in January. This trend has continued into February and March.

The latest attack took place on Monday, when two Israeli officers were deliberately struck by an Arab car while attending to a broken-down vehicle near Ramallah. While plowing into Israelis has become commonplace in the West Bank, security officials say this attack was unique and may indicate a more combustible situation in the territory. Usually, such car rammings are the result of one lone driver acting on a momentary impulse. In this attack, three Palestinians were in the vehicle.

According to the testimony of the one surviving Palestinian involved in the ramming, the carload of Hamas-affiliated terrorists was returning from another attempted attack of throwing firebombs at Route 443, near an army checkpoint. On the way back from that attack, they spotted the broken military vehicle and decided, on the spur of the moment, to initiate another terror attack, this time using their vehicle as a weapon.

Late last year, the head of Israel’s security agency, Nadav Argaman, warned of a deceptive quiet in the West Bank. “On the surface, it appears as if there’s relative calm, but this quiet is deceptive because beneath the surface tensions are increasingly simmering,” he told Knesset’s Foreign Affairs and Defense Committee.

Argaman noted that in the past year, Shin Bet had foiled 480 attacks, arrested 219 Hamas cells, and thwarted about 590 “lone wolf” attackers. Argaman said, “The large scope of attacks can only indicate the extent of terrorism taking place beneath the surface.”

Given the steady increase in the number of attacks, the lid might be ready to come off the Hamas-led terrorist activity in the West Bank. This could certainly take place if the crisis brewing on the Temple Mount is not quickly resolved.

As I wrote two weeks ago, Palestinians are increasing their control over the Temple Mount and are instigating a dangerous standoff with Israel over the illegal opening of the Gate of Mercy. In the past two weeks, Israel has repeatedly backed down, allowing Palestinians to pray in that part of the compound located near the Golden Gate, although police arrest the Arab who opens the gate each day.

Israel, however, rejects that notion and has asked the Waqf to appear before a Jerusalem court and answer to its illegal opening of the site. Unless it comes before the court, Israel says it will officially, forcibly close the area in a week’s time.

But the Waqf is not backing down from its virtual sit-in. It has called for Palestinians to converge on the Temple Mount over the coming days to force Israel to back down.

After an emergency meeting of the Waqf council on Monday, council member Abdel Qader announced, “Israeli courts do not have jurisdiction over al-Aqsa Mosque. We do not recognize the laws of ‘the occupation,’ and we will not succumb to threats by the Israeli police and authorities.”

The Jerusalem Post reported another Waqf official saying that there will be “dangerous repercussions” if the site is closed. The same official said, “Israel’s provocative measures will lead to an uprising in Jerusalem, similar to the one that erupted in 2017 and which forced the Israeli authorities to remove the security cameras and metal detectors.”

Indeed, given the success of the mass protests in 2017, Palestinians will be increasingly hard-nosed until they get what they want. Given Israel’s recent history of giving in to Palestinian control over the Temple Mount, there is absolutely no incentive for the Palestinians to back down.

And so, unless Israel backs down, the next week on the Temple Mount will be increasingly dangerous.

As we learned from 2017, and indeed the first and second intifadas, what starts on the Temple Mount ignites both the West Bank and the Gaza Strip.

While Israel’s news pundits will focus on how this situation could affect next month’s election, there is something far bigger at play.

As Trumpet editor in chief Gerald Flurry wrote in 2006, specific events in Jerusalem actually act as signposts, by which we can understand where we are in the timeline of biblical prophecy. He specifically noted how Israeli-Palestinian tensions boiling over on the Temple Mount is one of the first signposts that announces we are on a countdown to the coming of the Messiah. He wrote:

Whenever crises develop on the Temple Mount between Palestinians and Jews, such as is developing this week, it is time to take notice.

Israel will never give up the Temple Mount, and the Palestinians (with the backing of the Arab world) will not rest until they have it. Logic and history instruct that a clash is inevitable. The Bible shows how that inevitable clash will be just the first domino to fall leading to the fulfillment of other end-time prophecies culminating in the coming of the Messiah. And therein lies the good news. To understand more of the full timeline of end-time prophecies concerning Jerusalem, please request our free booklet Jerusalem in Prophecy, by Gerald Flurry.