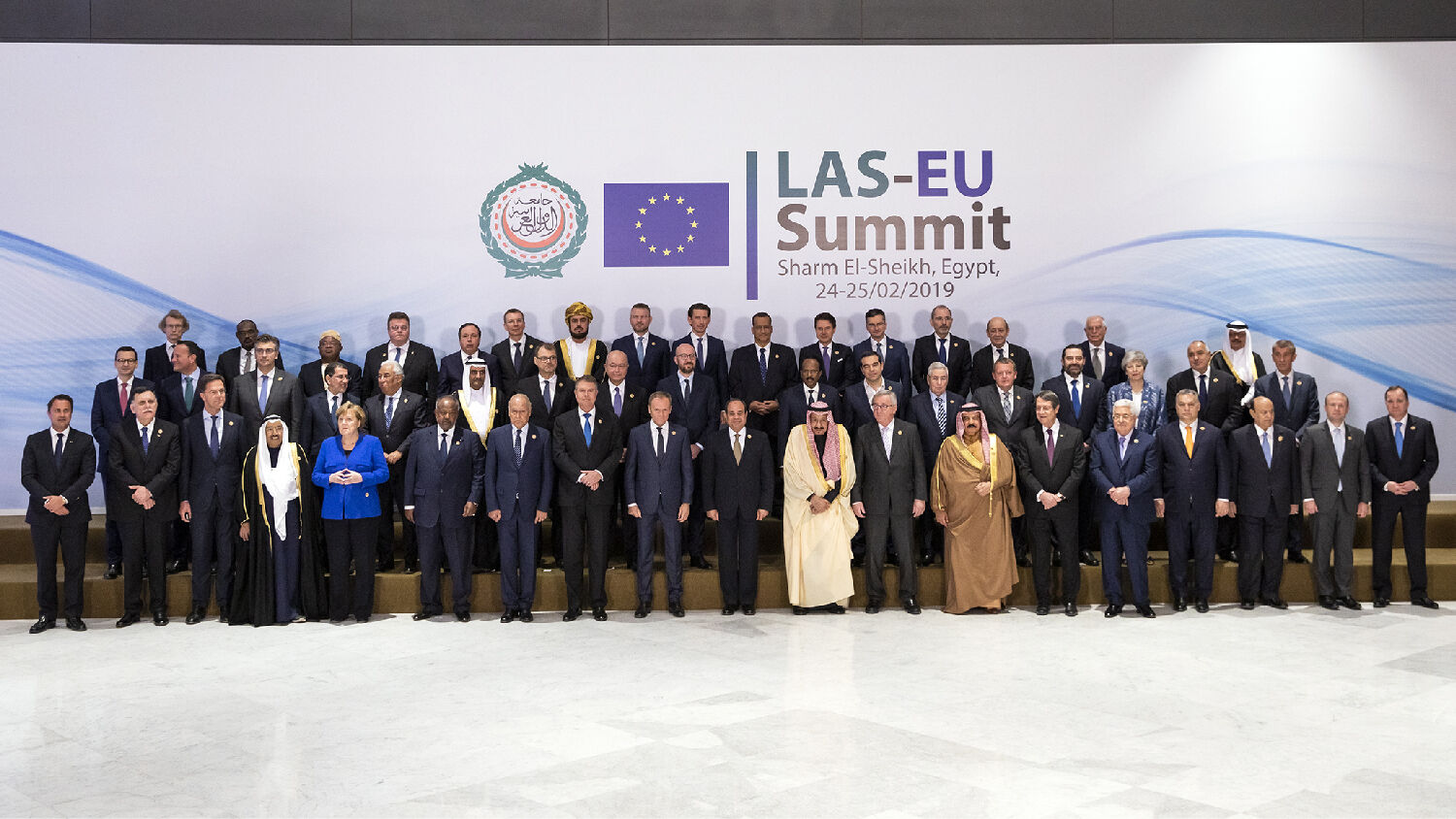 EU and Arab League leaders, including German Chancellor Angela Merkel, attend a group photo session during the first Arab-European Summit on February 24 in Sharm el-Sheikh, Egypt. Leaders from European and Arab nations are meeting for the two-day summit to discuss a range of topics including security, trade and migration.
Dan Kitwood/Getty Images

In cooperation with member states of the Arab League, Germany seeks to push back Iranian influence in Syria.

For years, the Trumpet has predicted that Syria would ally with Germany in this end time. This biblical prophecy is about to be fulfilled.

The Arab League—founded in 1945 by Egypt, Jordan, Lebanon, Iraq, Syria, Saudi Arabia and Yemen—now consists of 22 countries. These countries are united through their common language, Arabic, but disunited on various political topics. But one issue that many of them have in common is concern about Iran, a concern shared by the EU.

Chancellor Merkel also stressed the need for close cooperation between the EU and the Arab League and called for human rights to be respected. pic.twitter.com/YRCHKXXKAS

At the summit, Merkel urged that the next step in Syria be the establishment of a constitutional committee led by the United Nations. She also emphasized that, since the Syrian conflict has resulted in 6 million people fleeing the country, a “process of political change” has to be initiated.

From Germany’s point of view, a solution to the conflict in Syria is only possible within the framework of a sustainable, lasting and comprehensive political process that incorporates the interests of all Syrian people and religious groups.

Beyond working with the UN and local Syrian groups, Germany believes that successful intervention in Syria can only succeed with the strong cooperation of other Arab nations. Concerning Merkel’s speech at the summit, Spiegel Online wrote in its headline, “The Chancellor Calls for Action for Change in Syria.”

Start of the 1st Summit of the #EU with the #ArabLeague in Sharm el-Sheikh with Chancellor #Merkel. There are many topics on the agenda - from trade to sustainable development and security to the conflicts in the region; also opportunities for bilateral talks. #EULASsummit pic.twitter.com/Rek9tzdlU1

Few know exactly what that change may entail. Bible prophecy, however, gives a clear picture.

In September 2012, 17 months after the outbreak of the civil war in Syria, Trumpet editor in chief Gerald Flurry wrote:

Based on the prophecy in Psalm 83, Mr. Flurry predicted that Germany would play a key role in the outcome of the Syrian crisis. In 2012, German involvement in the region still seemed unlikely. It was neither desired by Russia nor deemed necessary by the United States. But with the U.S. withdrawal and Russia’s lack of funding to continue its involvement in the region, German intervention is all the more likely.

What is Germany’s objective in bringing about change in Syria? Mr. Flurry continued:

America has been too weak to tame Iran and neutralize its allies, but Germany is moving in and filling that power vacuum. The whole world ought to be watching what Germany is doing in the Middle East. …

At the recent Munich Security Conference, Merkel revealed that this is indeed Germany’s objective in the region. Concerning the U.S. announcement of its military withdrawal from Syria, she said: “Is it a good thing to immediately remove American troops from Syria, or will it not strengthen Russia and Iran’s hand?”

Germany is intensely concerned about Russia’s and especially Iran’s growing influence in the region. Not all in the Arab League share this same concern, but many of the more moderate Arab states do. In their shared goal to push back Iranian influence, Syria has become a major battlefield.

We are seeing the formation of a coming alliance between Catholic Europe and Sunni Arab nations. Their first battle against Iranian influence is fought in Syria, and the Bible foretells that Catholic Europe will eventually destroy Iran. Daniel 11:40 reads: “And at the time of the end shall the king of the south push at him: and the king of the north shall come against him like a whirlwind, with chariots, and with horsemen, and with many ships; and he shall enter into the countries, and shall overflow and pass over.”

The king of the north in this prophecy refers to a German-led Europe, which at the time of the attack may be allied with a few moderate Arab states. The king of the south refers to radical Islam, led by Iran. Some Arab League nations currently aligned with Iran will also fall victim to Germany’s attack. But at the moment, Germany is still pleading with them to join its camp.

You can learn more about this prophecy in Mr. Flurry’s booklet The King of the South, free upon request. Read “How the Syrian Crisis Will End” for a detailed overview of the specific prophecies that led Mr. Flurry to predict Germany’s involvement in Syria. Studying these topics will not only show you exactly where events in the Middle East are heading, but also grant you insight in the great hope that lies within Bible prophecy.

Germany’s alliance with Arab League nations is not just about counteracting Iranian influence in the region. It is also about opposing Israel. The members of the Arab League are divided on many issues, but they are united in their hatred of Israel. Hatred of Israel is almost a prerequisite for becoming a League member. After Egypt signed the Egypt-Israel Peace Treaty in 1979, the Arab League temporarily suspended Egypt’s membership.

Although their quest always failed—due to internal disagreements, Israel’s military superiority and God’s intervention—Arab hostility did not end. The Bible prophesies in Psalm 83 that some of these nations (together with a few others) will again unite against Israel, but this time, they will be led by Germany. Such an alliance has never happened before in history, but Germany will soon find its interest to be more closely aligned with these Arab nations than with Israel.

Israel is also fighting Iranian influence in the region and seeks stability in Syria. Moreover, Israel is the only democracy in the Middle East, the only real upholder of human rights, and the only true ally of the West. Leaders of the Arab League, on the other hand, are accused of severely violating human rights, torturing and killing political opponents, and causing geopolitical strife. Yet Germany chooses to cooperate with the Arab League rather than honestly supporting Israel.

At the summit in Sharm el-Sheikh, Merkel stated that Germany supports a two-state solution: giving Palestinians their own nation alongside Israel. But a two-state solution would turn the West Bank over to Palestinian control, thus depriving Israel of the ability to defend its eastern border from Arab attack.

Considering the history of the Arab-Israeli conflicts, Germany’s cooperation with Arab nations, and its demand for a two-state solution, one may ask: Are German negotiations aimed at undermining Israel’s defense against another Arab attack?

Consider this: Germany always emphasizes its historic obligation to stand with Israel. But is it really in Israel’s interest to involve its enemies in Syria? Syria can be seen as one of the Arab world’s primary launching pads for attacks against Israel. Syria’s civil war has diminished this prospect significantly. There is no doubt that various Arab nations want stability in Syria in order to lead another war against Israel from there. So why would Germany want to involve these nations in Syria?

If Germany involves the Arab League in bringing about political change in Syria, one thing can be certain: Syria’s next political regime will also be hostile against Israel. This too is exactly what Psalm 83 prophesies. Verses 2-4 read: “For, lo, thine enemies make a tumult: and they that hate thee have lifted up the head. They have taken crafty counsel against thy people, and consulted against thy hidden ones. They have said, Come, and let us cut them off from being a nation; that the name of Israel may be no more in remembrance.”

Psalm 83 specifically mentions Syria being part of this alliance, along with Turkey, Saudi Arabia, Jordan and Lebanon. Led by Germany, the ultimate goal of this alliance is to wipe out Israel!

In the imminent future, we can expect that Israel will rejoice over this alliance, as they fight their common enemy: Iran. And while Germany and some moderate Arab nations may claim to defend Israel, the Bible reveals that they inherently seek its destruction. Why?

Psalm 83 reveals that their defiance is directed against God Himself. Islam in the Arab world and Catholicism in Europe each claim to be the only true religion. But the nation of Israel traces its roots back to the real founding of true religion by God. Although the nation of Israel has turned away from God, its history and its sacred writings still testify to that fact.

Soon Syria will join this prophesied alliance we see forming today, and Israel will find itself surrounded by hostile Arab nations that are allied with Germany. At the moment, many German politicians still claim to be pro-Israel, but the warning signs abound that Germany will betray Israel.

God allows all of this to happen for a reason. While this will have devastating consequences for the nation of Israel in the near term, it will eventually lead its people back to God!

Hosea 6:1 reveals the outcome of Israel’s response to the looming suffering: “Come, and let us return unto the Lord: for he hath torn, and he will heal us; he hath smitten, and he will bind us up.” Soon, Israel will once again trust God to protect them! But that’s not the end of the story. The Bible reveals that all these events are leading to the return of Jesus Christ who will bring peace to every single nation on this Earth. This is the most wonderful news this world could hear! But to understand how imminent Christ’s return really is, you have to understand the signs that He Himself said would precede His Second Coming. To learn more about these signs, read “Christ’s Coming Is ‘At the Very Door’!” by Gerald Flurry.