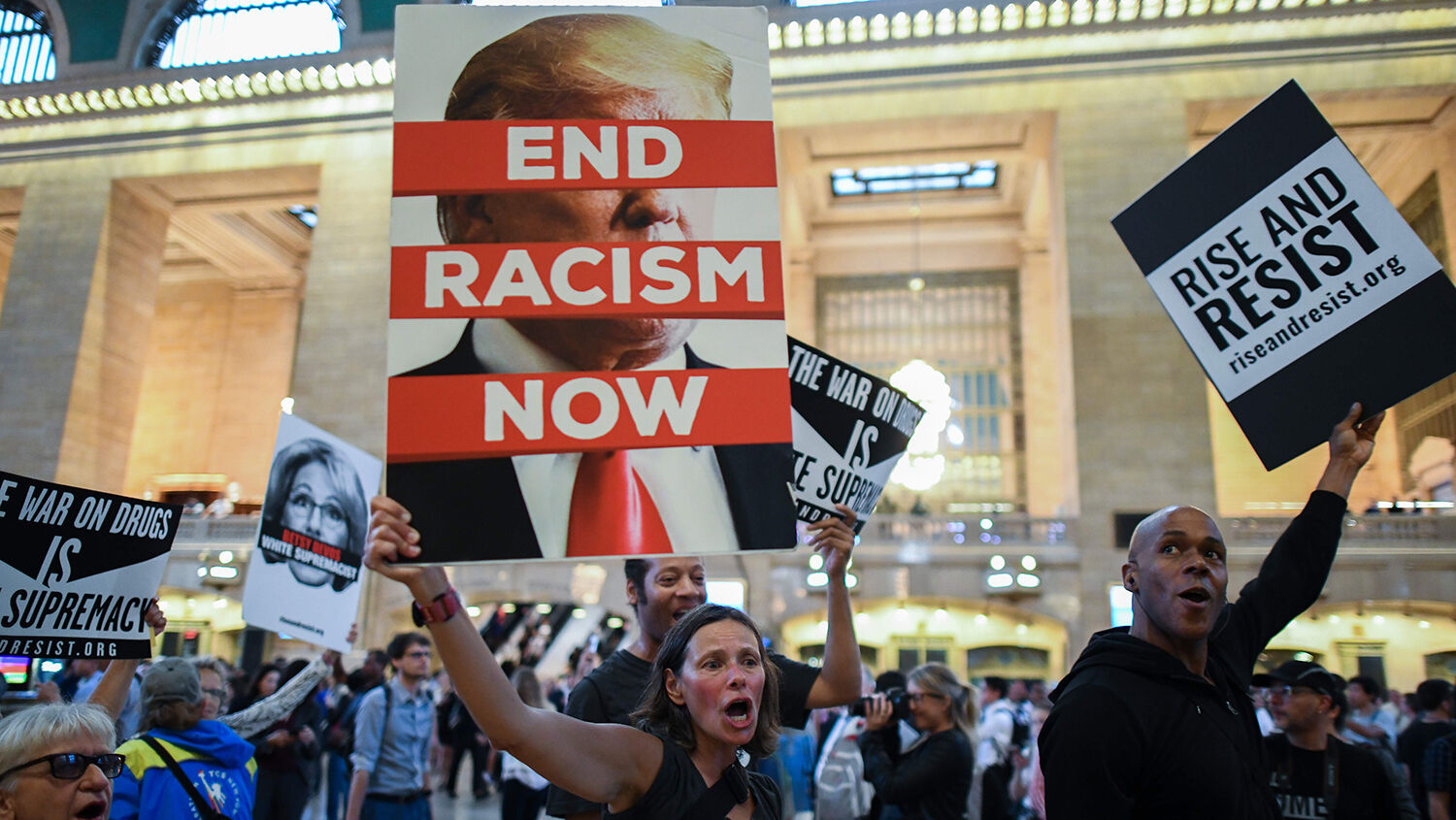 Protesters shout slogans and wave placards against U.S. President Donald Trump during a Rise and Resist Against White Supremacy demonstration inside the Grand Central Station in New York on Sept. 18, 2017.
JEWEL SAMAD/AFP/Getty Images

Without its prism of racist rhetoric, the rainbow coalition will dissipate.

Is the president of the United States a racist? According to Sen. Kamala Harris, the answer is yes. In an interview with the The Root published on Tuesday, the Democratic presidential candidate made her opinions on President Donald Trump clear. She was asked, “So you definitely agree that he’s a racist?” She replied, “I do, yes. Yes.”

Other 2020 Democratic presidential candidates agree. In fact, Sen. Bernie Sanders came on stronger in his presidential announcement. He called the president “a racist, a sexist, a xenophobe and someone who is undermining American democracy as he leads us in an authoritarian direction.” Sen. Sherrod Brown unabashedly told nbc’s Meet the Press, “We have a president who’s a racist.” Sen. Cory Booker was slightly more circumspect, saying, “I don’t know the heart of anybody,” before saying the president uses “bigoted language.”

In testimony before Congress on Wednesday, President Trump’s former lawyer Michael Cohen joined the fray and accused him of being a racist who courts white supremacists.

In spite of all these accusations of racism, the president’s approval rating among black and Hispanic voters continues to climb. One poll indicates that President Trump may receive close to 20 percent of the African American vote on Election Day 2020—almost three times the share he received during the 2016 presidential election. Another poll shows that his support among Hispanic adults jumped from 31 percent to 51 percent soon after he ramped up his push to get funding for a wall on the southern border.

These figures seem strange to those who believe that blacks and Hispanics universally hate the “racist” Republican Party. But many black voters approve of the way the Trump administration has handled the economy, and many Hispanic voters are worried about illegal immigration. If President Trump gets 20 percent of the black vote and 50 percent of the Hispanic vote in 2020, there is almost no way for the Democrats to win the election.

This is why Democrats are vociferously condemning President Trump as a racist.

“To keep blacks voting Democratic, it is necessary for the party and its supporters to keep alive the idea that racism is prevalent in America and to portray the Republican Party (as well as independent challengers to the Democrats, such as the tea-party movement) as racist,” wrote James Taranto in a Wall Street Journal editorial. “The election of Barack Obama made nonsense of the idea that America remains a racist country and thereby necessitated an intensifying of attacks on the opposition as racist.”

The “rainbow coalition” of the Democratic Party coalition is full of paradoxes. Feminists vote alongside Islamists. Hispanic Catholics vote alongside atheistic abortionists. Working-class blacks vote alongside open-borders activists. Many people selecting “Democrat” at the ballot box actually vote against their own values and interests because they regard the Republican Party as the greater—racist—evil. Now that an increasing number of blacks and Hispanics are abandoning the Democratic Party, party leaders are doubling down on their message that “the Republican president is a racist.” If many more Democratic voters stop viewing politics through the lens of the “racism” accusation, the rainbow coalition will dissipate.

But doubling down on accusations of racism will have devastating consequences.

During the height of the civil rights movement in the 1960s, renowned educator Herbert W. Armstrong wrote from a unique perspective—neither white nor black, Republican nor Democrat, but based on the eternal truths of the Holy Bible. Mr. Armstrong taught the way to true peace and correctly identified the problems plaguing race relations. Yet he also understood what the Bible prophesied for the near future. Basing his predictions on these prophecies, he wrote in the October 1963 Plain Truth, “Make no mistake! This is no light matter to pass over casually! Race war is coming! Racial tensions, passions and hatreds are being deliberately stirred by organized planning. It will explode into mass violence that will stagger the imagination! It will be whipped into an accelerating crescendo until human blood runs like rivers!”

His warning highlighted the fact that racial violence in America is not happening because of an innate hatred between races. It is being stirred up by politicians, many of whom are trying to scare people into voting for them. In the 1960s, this tactic spiraled out of control as hundreds of people took to the streets to riot. And it is about to spiral out of control again.

Isaiah 1:7 states: “Your country is desolate, your cities are burned with fire: your land, strangers devour it in your presence, and it is desolate, as overthrown by strangers.”

In his book The United States and Britain in Prophecy, Mr. Armstrong proves that the biblical book of Isaiah is primarily a book of prophecy about end-time Israel (primarily the United States and Britain). So, this verse is about a time when “strangers,” or non-Israelites, burn down the cities of the land. God allows this to happen as punishment for the people’s sins.

The racially charged rhetoric being hurled by politicians is stirring up negative emotions and anger. This rhetoric may be intended as a vote-getting play, but it is already starting to boil over into riots and protests. Unfortunately, the human race will have to endure an immense amount of suffering before it is willing to embrace the way to true peace.

For more information on the future of race relations in America and how God plans to restore America to a position of global prominence, read Great Again by Gerald Flurry.