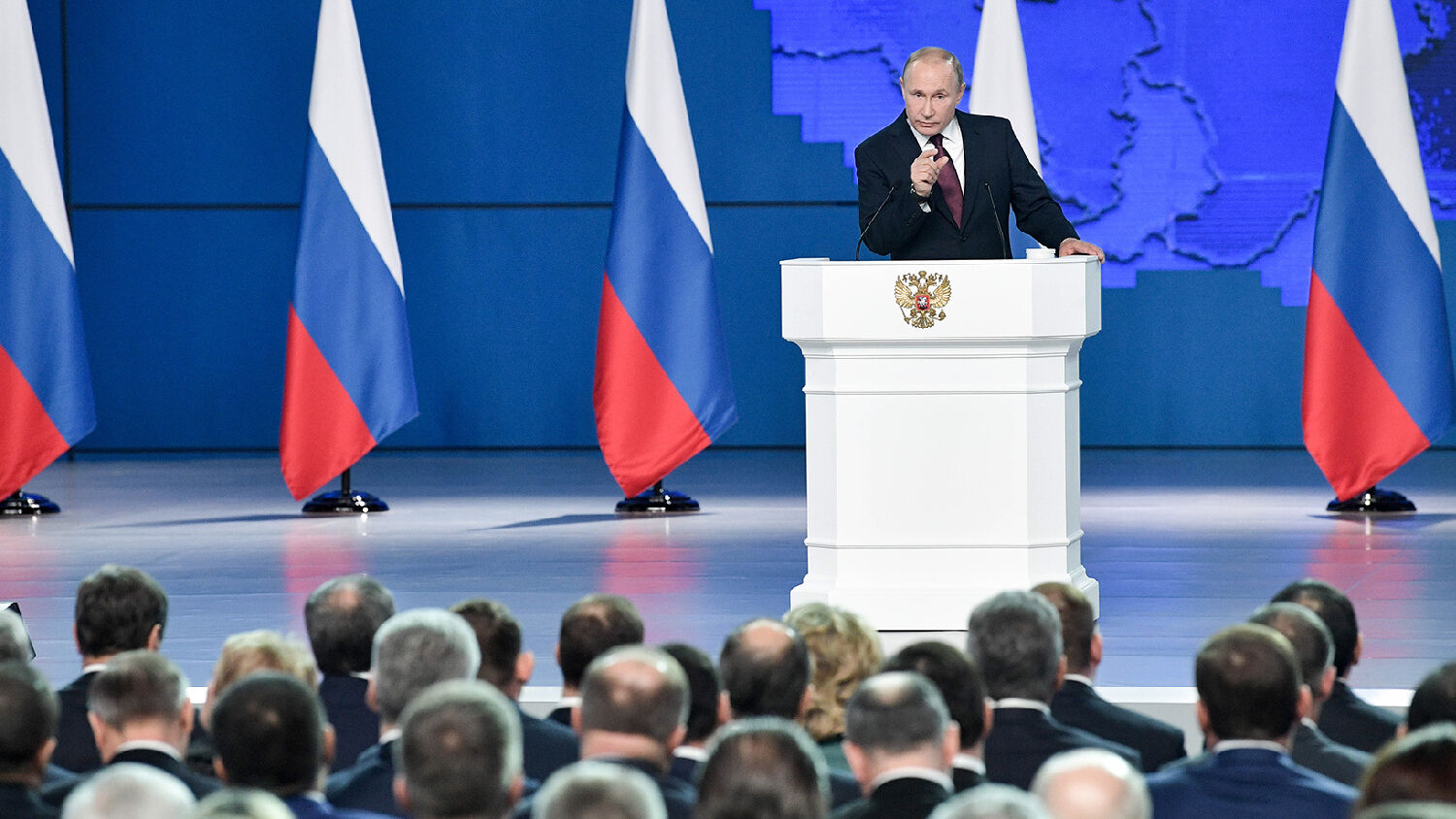 The United States is facing threats from a militarized Russia.

Russian President Vladimir Putin brazenly threatened the United States with a nuclear strike during his annual state of the nation address on February 20. He warned that if the U.S. places missiles in Europe that “can reach Moscow in just 10 to 12 minutes,” then “Russia will be forced to create and deploy weapons that can be used not only in the areas we are directly threatened from, but also in areas that contain decision-making centers for the missile systems threatening us” (official Kremlin translation throughout).

This is a direct threat to the U.S. If the U.S. deploys weapons in Europe, then Russia will be forced to respond by striking the U.S. “These weapons,” Putin continued, “will fully correspond to the threats directed against Russia in their technical specifications, including flight times to these decision-making centers. We know how to do this and will implement these plans immediately, as soon as the threats to us become real.”

This is some of the strongest language to come out of Russia since the end of the Intermediate-Range Nuclear Forces Treaty, and it is a very valid threat. Russia already has the weaponry and is currently developing even more that is capable of hitting and devastating the U.S.

Among these weapons is the autonomous torpedo-like Poseidon submarine, capable of triggering a radioactive tsunami with waves up to 300 feet high and with a nuclear yield of up to 100 megatons. The first Poseidon submarine is scheduled to be launched this year.

Also scheduled to be deployed this year is Russia’s new Avangard hypersonic missile, which the U.S. currently cannot counter. Avangard, according to Putin, is “invulnerable to interception by any existing and prospective missile defense means of the potential adversary.”

In his speech, Putin said that America has “already tried to gain absolute military superiority with their global missile defense project. They need to stop deluding themselves. Our response will always be efficient and effective.” America, the declining global superpower, has been challenged by the emerging Russian superpower.

While Putin emphasized during his address that Russia would only react to the U.S. and act in defense, this strong rhetoric, validated by nightmare weapons systems, reveals the dangerous era that we have entered. As the U.S. withdraws from the world scene, Russia is rising to take its place.

Like Russia, China is also rising to prominence to disrupt the world order. China’s People’s Liberation Army has released a new propaganda video, the Daily Mail reported on February 20. In the video, images and clips flaunting China’s military might are displayed with rapid-fire progression.

The video showed various weapons, including the Dongfeng-41, which reportedly has the longest range of any ballistic rocket in the world and is capable of hitting London or the U.S. with a nuclear warhead. The Dongfeng-26 was also displayed; it is capable of carrying nuclear warheads that can precision strike land or sea targets.

China is proving day after day that it is a rapidly rising formidable force that will soon challenge the world.

The Bible prophesies that in this end time both Russia and China will rise to become world powers with mind-blowing military might. They will lead a powerful end-time Asian bloc called “the kings of the east” (Revelation 16:12). Not only will the technologically advanced weaponry of this alliance “trouble” other world powers (Daniel 11:44), but so will the sheer size of its army—200 million men! (Revelation 9:16).

The dramatic rise of these Asian superpowers—Russia and China—will shake the world. These two powers, together with the Asian hordes they lead, are identified in Ezekiel 38. Through these scriptures we know that Russia will be the primary leader of this alliance, and it will be closely allied with and supported by China. Various translations and commentaries of Ezekiel 38 show that this alliance will be led by the prince of Rosh, or the prince of Russia!

In the September 2014 Trumpet, editor in chief Gerald Flurry wrote:

These Bible prophecies are being fulfilled, and the Trumpet is boldly proclaiming them. As Putin continues to build up Russia militarily and threaten the world, remember these prophecies. Russia and China are allying and together growing into a formidable military power, threatening the entire world. But everything is happening exactly as God said it would. He is in complete control and these trends are leading to the fulfillment of the most exciting event in the universe—the return of Jesus Christ.

This is the perspective we need as we watch these prophecies play out. To learn more about these end-time prophecies and to know exactly what God is directing on the world scene at this time, to know what is just ahead, read our free booklet The Prophesied ‘Prince of Russia’ and our Trend article “Why the Trumpet Watches the Rise of China as a Superpower.”