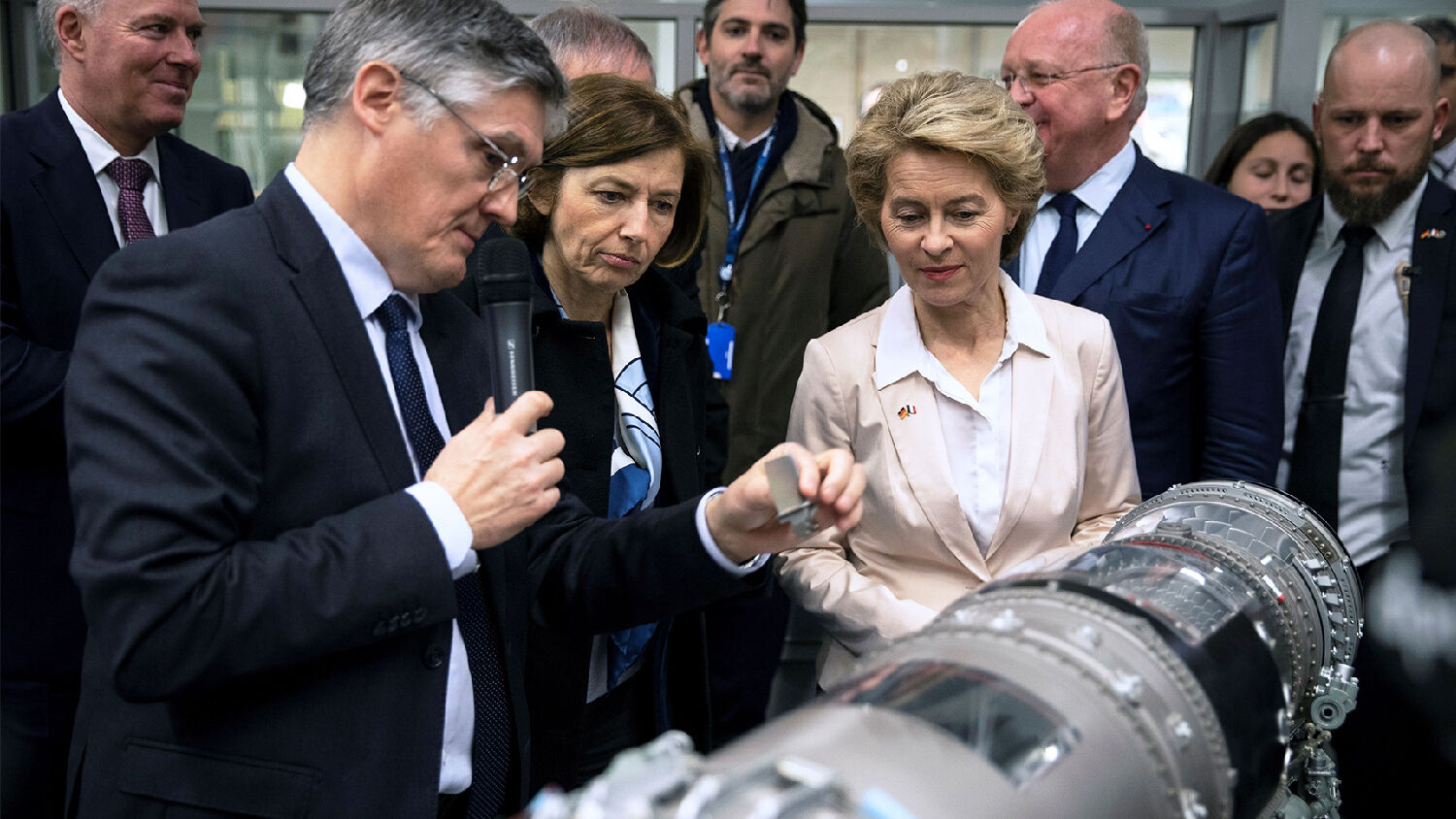 French Defense Minister Florence Parly, German Defense Minister Ursula von der Leyen and the French high-technology group Safran’s chairman of the board, Ross McInnes, visit the Safran plant in Genneviliers, near Paris, on February 6 during the inauguration of a construction platform as part of the French-German fcas.
THOMAS SAMSON/AFP/Getty Images

French Defense Minister Florence Parly and German Defense Minister Ursula von der Leyen announced on February 6 that France and Germany will sign a €65 million (us$73.5 million) deal to proceed with a project to produce a joint stealth fighter jet.

“What we are doing today with the Franco-German fighter jet of the future is concrete, balanced, makes us stronger, and prepares for the defense of Europe,” wrote Parly.

First announced in July 2017, the project is called Future Combat Air System (fcas) and is a part of the broader Next Generation Weapons System (ngws), which aims to modernize European combat capabilities to compete in the era of stealth, data-sharing and ever advancing drone technology. Dassault and Airbus will conduct the project. The research period will begin on February 20, followed by testing and production.

America and China are currently the only two nations with credible domestically made stealth technology. Russia is getting close, and Japan appears to have abandoned its stealth development in favor of the American F-35.

The competition to furnish Europe with a stealthy, next-generation successor to the Eurofighter has been pushed higher on Europe’s list of priorities as major powers like Russia and China race to arm themselves and the Continent’s traditional alliance with the United States has faltered.

Europe had three options for producing its new jet. By choosing the purely European option, France and Germany are sending a signal: America is no longer a trustworthy ally; Europe should look to France and Germany.

One option was to adopt the F-35. Although the F-35 is more established and has actually seen combat, it is still struggling with troubling issues and spare-parts shortages. Italy and Belgium already use it, as does Britain—although future orders from Britain will likely stop once it produces its domestically manufactured sixth-generation Tempest fighter. In Germany, officials have pressured the Luftwaffe to avoid the F-35 in favor of a European alternative.

Europe’s other option was to cooperate with Britain’s Tempest program. The program had already partnered with Italian firm Leonardo for some of its components. It is projected to be ready by 2035. However, with Brexit uncertainties clouding its future, Europe is unlikely to choose this option.

The option chosen is the Franco-German fcas program, a bid to create a purely European, stealthy and network-integrated jet similar to the F-35 but with the advanced sixth-generation technology of Britain’s Tempest. This joint venture by Airbus and Dassault is projected to enter service in 2040. Like the F-35, Europe’s stealth fighter will benefit from an advanced information network enabling the sharing of targeting and mission data between friendly forces in the air, sea and on land. In a step beyond current F-35 capabilities, the network would be connected to proposed swarms of combat drones serving as the fighter’s wingmen. The drones could potentially attack a target, collect data on enemy forces, and defend the fighter from incoming missiles. They are set to use the latest artificial intelligence and machine-learning technology to optimize their behavior.

With von der Leyen and Parly’s announcement, Europe has officially chosen the European option. The fcas program is seen as better for European businesses, as well as more symbolically European.

The European Union has traditionally relied on Britain and America for much of its military might and overall security. That age is fast drawing to a close. There is concern that Brexit, British defense cuts, and America’s negative stance on nato will leave the EU severely lacking in military strategic muscle. Britain “risks becoming a military dwarf” because of defense cuts, warned Carnegie Europe. Europe knows times are changing. It sees that Britain and America are no longer reliable defense partners.

For this reason, there is a push to move European common defense initiatives outside of EU constraints. One such example is France’s creation of the European Intervention Initiative (eii), a framework allowing European nations to act militarily outside of the legal constraints of nato and EU. Its goal is to prioritize operational readiness for those nations willing and able to act, instead of weighing them down with those unable and unwilling. In this way, it bypasses the unwieldy EU framework and frees stronger nations to act voluntarily.

Continue watching France and Germany. Although Europe is not politically unified at this stage, these two nations are making strides toward stronger European defense and greater freedom of action. This is a trend the Trumpet has watched for many years. Recently we have drawn attention to the increasing closeness between France and Germany and how their recent shift away from America and toward each other aligns with Bible prophecy. Trumpet editor in chief Gerald Flurry wrote an article on this subject titled “France Rejects America—and Empowers Germany!” He wrote:

France is already taking concrete steps to build a European army alongside Germany. Perhaps this is why Macron is so bold as to criticize the U.S. His criticisms imply that Europe no longer needs nato, because it is building its own army. …

France and Germany are also collaborating on the development of new weapons and weapons manufacturing. Germany’s Leopard ii is already regarded as one of the best tanks in the world. It is used by 18 different countries. Germany aims to have a new tank by around 2030, and experts are already predicting that it will be the world’s most powerful. And France and Germany are working on it together. The project, called the European Main Battle Tank, is a joint venture between French and German companies.

These two countries are also working on an artillery system called the Common Indirect Fire System. French and German companies are also collaborating on a new fighter jet, which they aim to have ready by 2035 to 2040. Experts are predicting it will also be one of the best in the world, outperforming America’s F-35.

France and Germany already have a strong record of accomplishment from working together. A previous joint venture, the Eurocopter Tiger (EC 665), is one of the most powerful attack helicopters in the world. This is already built and ready to go.

France really does love Germany—you can see it in these important joint ventures!

For decades we have forecast the rise of this European military superpower that Germany and France are now building. In May 1953, Herbert W. Armstrong wrote, “[T]en powerful European nations will combine their forces.” The European unification project is going to consolidate to 10 nations that Germany can really dominate. You can read about this power in Daniel 2 and 7, and Revelation 13 and 17. Mr. Armstrong discussed these scriptures time and time again. I explain them in my free booklet Daniel Unlocks Revelation.

Today, these powers are combining just as Mr. Armstrong said they would!

With more progress on their joint fighter jet, these two powers continue to draw closer together. France is helping Germany to create a new military superpower in Europe. For more information on this critical trend, read “France Rejects America—and Empowers Germany!”