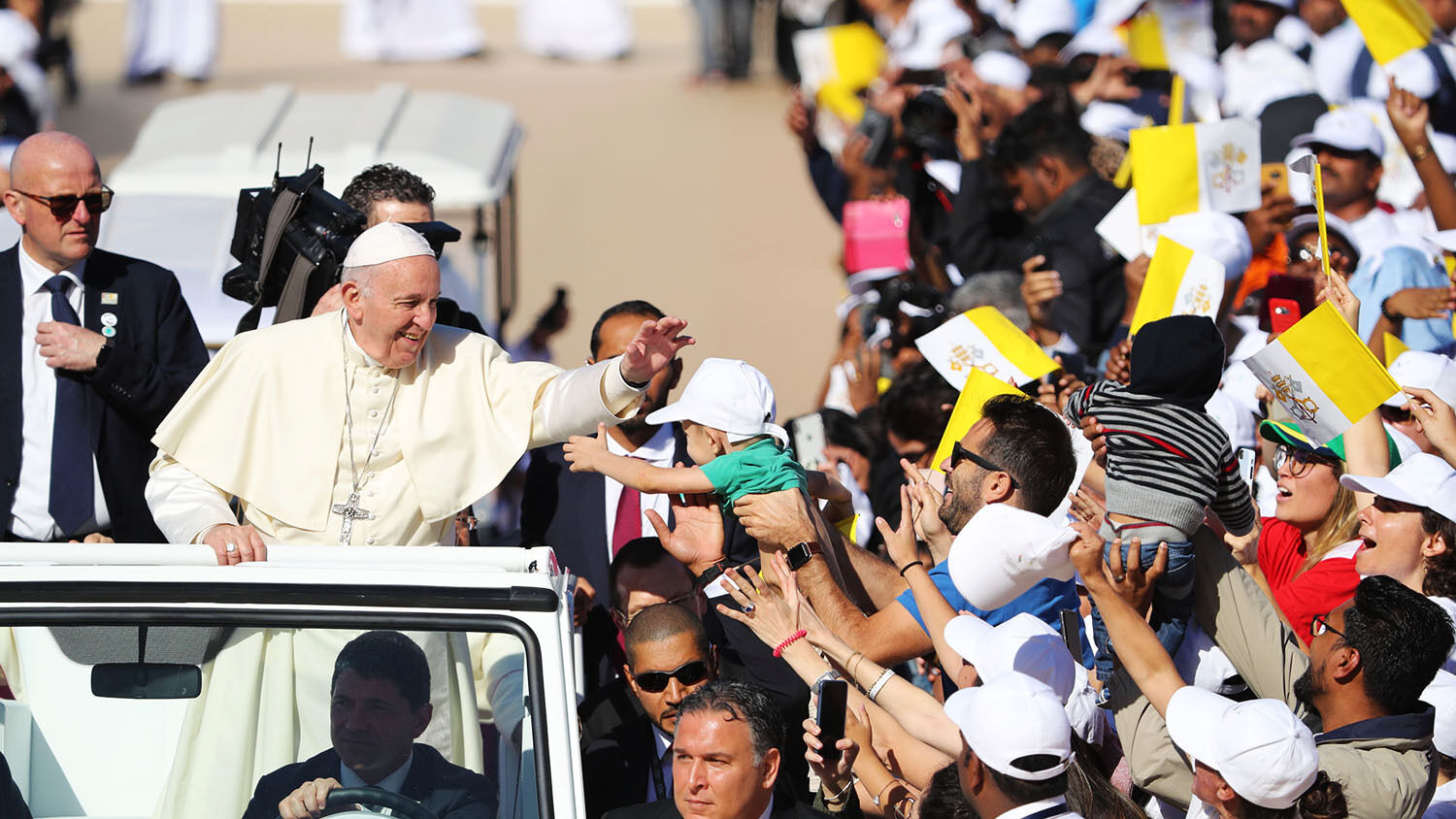 Pope Francis (2nd-L) blesses a child as he arrives to lead mass for an estimated 170,000 Catholics at an Abu Dhabi sports stadium on February 5, 2019.
KARIM SAHIB/AFP/Getty Images

Pope Francis is forging an alliance of civilizations against Iran.

Pope Francis just became the first pontiff in history to visit the Arabian Peninsula. Around 180,000 people flocked to a sports stadium in the United Arab Emirates on February 5 to hear him speak. Attendees came from 100 different countries, including large numbers of Catholics from India and the Philippines. Some 4,000 Muslims also attended the event, which was designed to promote interfaith dialogue between Catholicism and Sunni Islam.

The day before Pope Francis delivered his homily, he met with the grand imam of Al-Azhar University and signed a joint declaration appealing for peace between nations, faiths and races. “[W]e resolutely declare that religions must never incite war, hateful attitudes, hostility and extremism, nor must they incite violence or the shedding of blood,” the document reads. “These tragic realities are the consequence of a deviation from religious teachings.”

The Muslim Council of Elders, an organization that allegedly works to counter religious fanaticism and promote a moderate form of Islam, sponsored this interfaith meeting. Pope Francis condemned regional wars in Yemen, Syria, Iraq and Libya, and he called for greater cooperation between Christians and Muslims.

Like other Gulf Arab monarchies, the U.A.E. outlaws unsanctioned religious gatherings and forbids non-Muslims from proselytizing. This makes the fact that Pope Francis was invited to the nation by the crown prince of Abu Dhabi all the more significant.

For decades, the Gulf Arab monarchies have tolerated—even sponsored—radical Islamic sects like al Qaeda and the Muslim Brotherhood. But now, these radical sects and their offshoots are calling for the eventual overthrow of the Gulf Arab monarchies. So the kings and princes of these Arab states have changed strategies. Instead of appeasing radical Islamists, they now seek to crush them. This is why they are promoting organizations like the Muslim Council of Elders, and even reaching out to Europe and the Vatican.

“The pope’s visit was advertised as the U.A.E.’s gift to the many thousands of Catholic guest workers, including nearly 700,000 from the Philippines alone,” Graeme Wood wrote for the Atlantic. “That was only part of its purpose. Freed from any obligation to Islamists, and faced with the promise that those Islamists would work implacably to end the monarchies, the Gulf States have everything to gain from embracing the West, opening further, and reaping the benefits of cooperation against Islamists. The visit was not a concession to Christianity but a strategic calculation, and a canny one at that.”

Vatican geopoliticians have been trying to forge a strategic alliance of civilizations between Catholics and Muslims against radical Islamists for more than a decade. In 2009, Cardinal Angelo Scola of Venice lamented that a radical form of “Shiite messianism” was corrupting Iran and making it difficult for the Islamic republic to integrate with the West. This “Shiite messianism” is a belief that the return of the 12th imam—Islam’s version of the Messiah—can be hastened by creating violence and chaos. In order to create such chaos, Iran has become the world’s leading state sponsor of terrorism.

In response, Iran’s rivals on the Arabian Peninsula are looking for help from European nations and the Catholic Church.

This alliance of civilizations heralds the fulfillment of a Bible prophecy that Philadelphia Trumpet editor in chief Gerald Flurry has proclaimed for decades. In his free booklet The King of the South, Mr. Flurry explains that a prophecy recorded by the Prophet Daniel shows that Jesus Christ’s return will be precipitated by a clash of civilizations.

A related prophecy, recorded in Psalm 83, shows that the end-time descendants of the ancient Assyrians will make an alliance with the end-time descendants of the Edomites, Ishmaelites, Moabites, Ammonites, Gebalites, Hagarenes and others to destroy the modern nations of ancient Israel. As Mr. Flurry explains in The King of the South, this is a prophecy that Germany will ally with a confederation of Arabic and Turkish regimes to destroy end-time Israel, particularly America, Britain and the Jewish state.

This confederation won’t fully form until after the king of the south has been destroyed, but the pope’s efforts to partner with Arab monarchies against radical Islamists is a step toward this prophecy’s fulfillment. The Middle East is dividing into anti-European and pro-European factions. As astonishing as this sounds, the Bible reveals that Europe and its Middle Eastern allies will conquer the forces of radical Islam, then betray the United States, Britain and the State of Israel.

To understand these world-changing prophecies, study The King of the South.