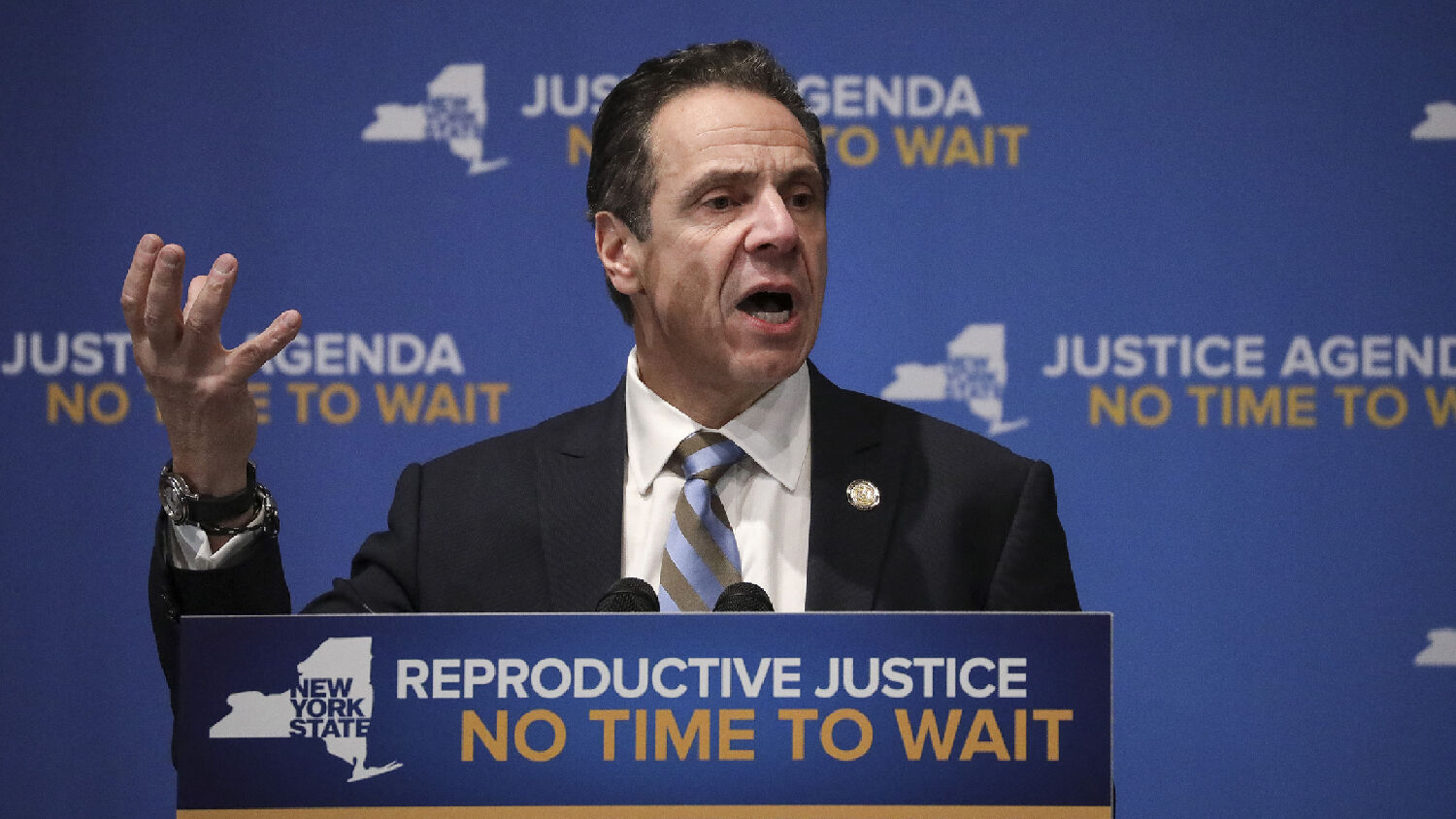 It isn’t something to celebrate.

This law essentially decriminalizes abortions right up to the point of birth. If a health-care practitioner decides killing a baby will be good for a mother’s health or even her psychological or emotional well-being, he can now legally end that young life.

When Gov. Andrew Cuomo signed the law, the New York Senate erupted in cheers. They rejoiced over doctors being freer to kill even more babies unborn and ready to be born.

Of course, they say they’re celebrating women’s rights. They’re nobly crusading for “freedom,” for “equality,” for “health.” They’re fighting the supposedly aggressive, dangerous efforts of those who would restrict those rights, most notably the Supreme Court’s appointment of Brett Kavanaugh, whom they fear could overturn Roe v. Wade.

Now, several other states are working to follow New York’s lead, including Massachusetts, New Mexico, Rhode Island and Washington. Last week, Virginia legislator Kathy Tran proposed a new state law similar to New York’s, aimed at lifting restrictions on abortions during the third trimester, even up to birth. She was questioned in a subcommittee whether her law would permit abortions “during dilation”—which is when the baby is beginning to emerge. She said yes.

What Tran is boldly advocating, and what New York State leaders are openly celebrating, is not just preserving current abortion rights. They are expanding them—and strengthening abortion culture in America.

Right now in America, on average, an abortion is performed every 30 seconds. That’s nearly 3,000 abortions every day, 1 million abortions every year. Excluding miscarriages, 1 out of every 5 pregnancies ends in the poisoning, dismemberment or other method of destroying the baby before—or as—he or she is being born.

But Cuomo, Tran and others say we need more.

Everything is moving in the direction of more abortion, looser laws and fewer restrictions—yet liberals act like the real danger is a supposed assault on women’s rights.

They warned that Kavanaugh’s confirmation would mean that “millions of people will die,” and are now pushing laws to counteract that. Meanwhile, since Roe v. Wade, abortion mills have killed more than 61 million unborn little boys and girls.

It was just 2008, during her first run for president, when Hillary Clinton—perhaps the most prominent champion of abortion in America—said she wanted to reduce the number of abortions. Her policy was for abortion to be “safe, legal and rare—and by rare, I mean rare.”

That position—only a decade old—is like a relic of ancient history.

Last week Virginia Gov. Ralph Northam spoke on a local radio program supporting Tran’s proposed law. Explaining how late a baby could be aborted, the governor said this: “[I]f a mother is in labor, I can tell you exactly what would happen: The infant would be delivered. The infant would be kept comfortable. The infant would be resuscitated—if that’s what the mother and the family desired—and then a discussion would ensue between the physicians and mother” (emphasis added).

There is no mistaking what he said. He is describing a child who has already been delivered—and a discussion taking place over whether to allow that child to live or die.

Lifetimes ago, the left abandoned the realm of absolute right and wrong when they committed to abortion. Ever since, they have reasoned and campaign-promised their way through the logic. Abortion should be done for a good reason, they said. It should occur early in pregnancy, they said. It should be rare, they said just three presidential elections ago. But since there is no stage between conception and a baby’s first breaths where he or she suddenly becomes a human being, they moved their demands. Not in the direction of making abortion earlier and rarer, but farther and farther toward the light at the end of the birth canal.

And now, even after that.

Governor Northam spoke with such humane terminology—keeping the infant comfortable and such … before killing it. The language always sounds so honorable and principled.

This is infanticide. This is murder.

Many people were horrified by what Governor Northam said. But what was the story in the mainstream media? According to the headlines, the real story was the overreaction by Republicans. Apparently anyone revolted by the idea of killing a child after delivery is just trying to deny women their rights.

It’s not about the fact that abortion is big business. It’s not about the fact that abortion clinics are encouraging abortion and trying to move patients in and out as quickly as possible. That Planned Parenthood alone takes in $1.4 billion a year in revenue, and that American taxpayers subsidize nearly a quarter of all abortion costs, no matter how morally opposed they are to it. It ignores the moral dimension of this question entirely.

This is what happens when we reject God.

This is what happens when we ignore the fact that He alone decides right and wrong. That He reserves to Himself the power over life and death. This is what happens when we take these decisions to ourselves. When we discard the truth that God is our Creator, and hypothesize that His vast, spectacular, beautiful creation is a cosmic accident without meaning or purpose or inherent value.

This is what happens when we cast aside the revelation that God made us in His own image—that He endowed us with tremendous potential given to no other creation—and that every single human life matters. This is what happens: We are now openly discussing the merits of killing babies before and after they are born.

God says abortion is murder. Society today vehemently disagrees. We have disagreed for decades, but lately, this view has been getting bolder and more aggressive.

We are using the laudable language of “rights” and “freedom”—even, ironically, “health”—but what are we talking about?

We’re talking about making it easier to murder.

Watch the video below of an abortionist, holding a tub containing the contents of his latest procedure. He is washing out a tub with intestines and bones and organs and tiny hands, ensuring he evacuated everything properly. He’s measuring the length of a tiny severed foot on a ruler to see how advanced the child’s development was. And this is the language coming out of his mouth: “Well the media attention is always directed for the fetus and the gory parts, if you will, of the procedure—when the really important thing is that we’ve been able to help this young lady get on with her life. She’s planning to go to school and she doesn’t have to take on the responsibilities of parenting. And here in just a few minutes we’re able to facilitate her decision to not be a parent at this time.”

How compassionate. How magnanimous and high-minded he is—as he holds a tiny decapitated head in his fingers.

Don’t focus on the gory parts, he says. Focus on the fact that we’re helping her live her life the way she wants to live it. And look—it takes mere minutes to turn that life into a tub of body parts.

This is what the people passing these laws are really celebrating. Not “reproductive rights.” Not “protecting a mother’s health.” They’re celebrating giving a woman the freedom to walk away from parenthood—to make the same terrible choice that an irresponsible man can—by murdering her child.

How could they have grown so callous? What is really behind such thinking? The Bible exposes its true origin: “the god of this world,” a malevolent spirit that hates human beings and wants to destroy us—and yet who rules this world (2 Corinthians 4:4). “He was a murderer from the beginning … there is no truth in him … for he is a liar, and the father of it” (John 8:44). Surcharging the air with hostility to the Creator, he is “the prince of the power of the air, the spirit that now worketh in the children of disobedience” (Ephesians 2:2).

Yes, that murderous, lying spirit “now worketh”—in a world increasingly filled with and governed by “children of disobedience.”

The Apostle Paul prophesied in 2 Timothy 3:1-4 that “in the last days perilous times shall come. For men shall be lovers of their own selves [selfish, self-centered] … disobedient to parents … Without natural affection … incontinent [without self-control], fierce [or brutal] … lovers of pleasures more than lovers of God.”

We are living in these “last days” of which Paul prophesied. Our world is rife with the attitudes he forecast—attitudes that lead to illicit sex, and to unwanted babies.

And to brutal abortions on a mass scale. And to celebrating this ghoulish reality.

God is already correcting us for these sins, but that correction is about to get far more severe. One day soon, however—thanks to that correction—people will become reacquainted with the Creator they have turned their backs on. And they will learn to cherish the sanctity of the gift of life.

That day cannot come too soon.