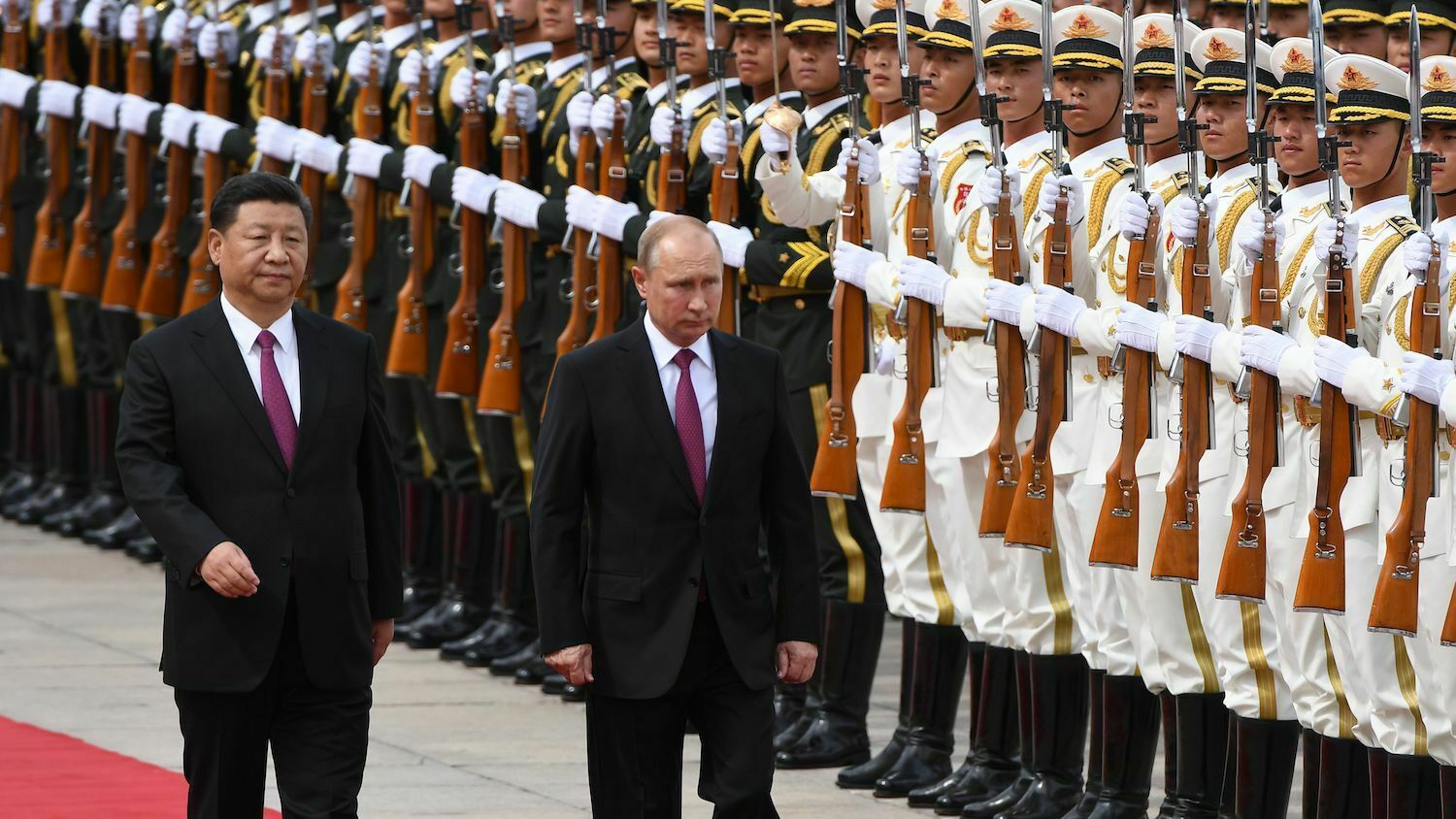 Russia’s President Vladimir Putin reviews a military honor guard with China’s President Xi Jinping during a welcoming ceremony outside the Great Hall of the People in Beijing on June 8, 2018.
GREG BAKER/AFP/Getty Images)

Increased cooperation between Russia and China threatens the United States.

Russia and China pose the biggest threat to the United States and are closer than they have been in decades, Director of National Intelligence Dan Coats said on January 29. While Russia and China continue to deepen their alliance, traditional U.S. allies are drawing away from America.

“China and Russia pose the greatest espionage and cyberattack threats,” Coats said in a report. “China and Russia are more aligned than at any point since the mid-1950s, and the relationship is likely to strengthen in the coming year as some of their interests and threat perceptions converge.” He listed U.S. unilateralism, democratic values and human rights as catalysts for their cooperation.

While Russia and China are closer than they had been, traditional U.S. allies “are seeking greater independence from Washington in response to their perceptions of changing U.S. policies on security and trade and are becoming more open to new bilateral and multilateral partnerships,” he wrote.

Coats did not name any specific U.S. ally, but he likely was referring to Germany and the European Union as those that are distancing themselves from the U.S., possibly as a result of U.S. President Donald Trump’s anti-nato sentiment and U.S. trade protectionism. The report warns that Russia and China are willing to reconcile with the allies that President Trump has been pushing away.

Some lawmakers on the Senate Intelligence Committee are concerned about how closer cooperation between Russia and China could threaten the U.S. “If those two countries begin to work together systemically, that could be a big problem for us,” said Sen. Angus King from Maine.

The Trumpet and its predecessor, the Plain Truth, have forecast for over 80 years that Russia and China will form a military alliance and play a pivotal role in Bible prophecy. Back in the 1950s, when tensions between the Soviet Union and China were high, Plain Truth editor in chief Herbert W. Armstrong said that the two would eventually lay aside differences and form a military coalition. “Russia’s program … calls first for the seizure of Asia,” the December 1959 Plain Truth proclaimed. It said that China would voluntarily submit to Russian leadership in an Asian bloc to advance China’s long-term ambitions. The article continued:

[The Mongols’ and Chinese] constant dream for centuries has been ultimate world conquest! … China knows, however, that in this highly industrialized age she can accomplish this dream only as an ally of Russia. … China is now ready to begin devouring the rest of Asia with Russia’s secret military backing.

At the time of Mr. Armstrong’s death in 1986, tensions between Russia and China were still high. But events since have proved Mr. Armstrong’s forecast right. How could he have predicted the Russia-China axis before it happened?

He based his forecast on Bible prophecy. Ezekiel 38 shows that an Asian bloc led primarily by Russia and secondarily by China will form in the end time. The book of Revelation calls this Asian bloc “the kings of the east” (Revelation 16:12). Ezekiel 38:2 reads, “Son of man, set thy face against Gog, the land of Magog, the chief prince of Meshech and Tubal ….” In the April 1981 issue of the Plain Truth, Mr. Armstrong wrote:

There is general agreement among students of prophecy that “Gog” in the land of “Magog” is the vast regions of northern Eurasia extending from the Baltic to the Pacific [modern Russia and China]. “Meshech” is Moscow; “Tubal” is Tobolsk [formerly considered Russia’s Asian capital]. The Bible margin says “Prince of Rosh,” which is [a variation of an ancient name for] Russia.

To understand why the Trumpet closely watches the Russia-China alliance, please request your free copy of Russia and China in Prophecy and He Was Right.