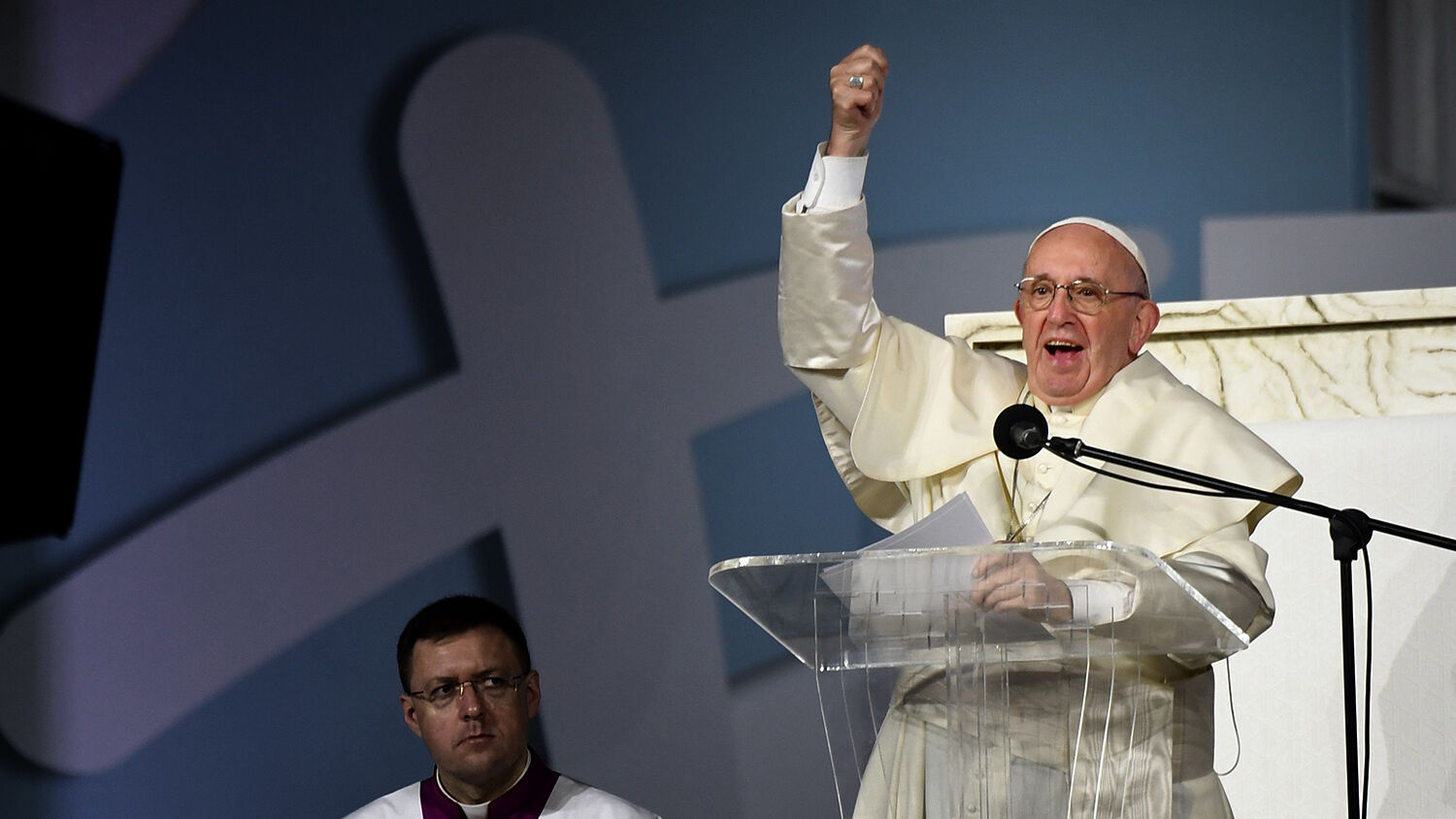 At World Youth Day celebrations, the pope brought a revolutionary message of a new world.

America is led by a “crazy” and “unchristian” leader. That’s the opinion regularly spouted by the far left—and it’s also the belief of the world’s most widely respected Christian leader.

On the pope’s flight to Latin America, a journalist asked him about a U.S. border wall. The pope said that walling off the entire border “is madness.”

“It is fear that makes us crazy,” he said.

Then he arrived in Panama for the Catholic World Youth Day celebrations (January 22 to 27). Held every two to three years, this is a major event on the pope’s calendar. The audiences he addresses sometimes number in the millions.

This year’s event was on the smaller side, probably a sign of how the sex-abuse scandal has damaged the Catholic Church worldwide. Even so, several hundred thousand people came to hear Pope Francis. He used the occasion to exhort them to build a very different world.

Popping up in the pope’s speeches at World Youth Day were criticisms of migration control. He used one homily to speak against the “senseless and irresponsible condemnation of every immigrant as a threat to society.” People should instead be “builders of bridges,” he said.

He explained that walls are, in fact, so bad that locking people in prisons is wrong. “This attitude spoils everything, because it erects an invisible wall that makes people think that, if we marginalize, separate and isolate others, all our problems will magically be solved,” he told a group of prisoners. “When a society or community allows this, and does nothing more than complain and backbite, it enters into a vicious circle of division, blame and condemnation.”

As usual, another recurring theme in the pope’s speeches was climate change. He said in prayer that “Your Son’s way of the cross continues in the plea of our mother earth, profoundly wounded by the pollution of her skies, the barrenness of her fields, the contamination of her waters, trampled underfoot by disregard and a fury of consumption beyond all reason.”

But the pope’s message was more than a list of condemnations—of conservatives, climate change and capitalism.

He also exhorted the young people to “say yes” to changing the world—through social activisim.

God’s vision for the world is not “a promise far off in the future, having nothing to do with the present,” he told young people. Instead, he told them, God “calls you in your communities and cities to go out and find your grandparents, your elders; to stand up and with them to speak out.”

He spoke to them about a “new world now being born.”

World Youth Day, he told them, would turn Panama from a hub of migration into a “hub of hope” for “a more humane world.”

It was this call for social activism that led George Neumayr at the American Spectator to comment, “His sermons could have been written by Nancy Pelosi.”

“Pope Francis spends much more time talking about this life than the next one,” Neumayr wrote. “He is given to statements such as ‘Another world is possible,’ but he isn’t referring to heaven. He is referring to a revolutionized political order.”

It’s a good observation. The pope puts forward a vision of the gospel very different from the one in the Bible. The Apostle Paul wrote that if our hope is in this life, this world, “we are of all men most miserable” (1 Corinthians 15:19). Paul described society as “this present evil world” and exhorted Christians to instead put their hope in “the world to come.” Jesus Christ told His disciples to change their actions. And He was not afraid to criticize leaders in the world, especially religious ones. But He never urged Christians to overthrow the Roman Empire and build a new world.

The pope, however, made clear last week that he doesn’t want his followers to wait for this new world to arrive, but to go out and build it in a very “practical” way, now.

In the past, Pope Francis has made clear that he wants to topple the global system of free-market capitalism. He has called it “a new tyranny” and “the dung of the devil.”

When the pope insists that nations must open their borders, that Christ demands more spending on climate change, and that capitalism is from the devil, who is he condemning? When he exhorts Christians to create a new world, whom do they have to tear down to make that happen?

It is very clear the pope is preaching against the United States of America. And last week, just like during his 2016 trip to Mexico, he was doing so on America’s front porch. As Trumpet editor in chief Gerald Flurry wrote at the time:

If Pope Francis is to be taken at his word, he could not possibly wish for the leader of the capitalist system to thrive and prosper, continuing to inflict its “tyranny” on the world. If he believes the free market is a force of destruction, then he would feel not only justified, but obligated to use his power to weaken it. …

This is a pope who will hug dictators, and then reserve his harshest criticism for the world’s most powerful democracy that has led the world in promoting true freedom. … [T]his pope has made clear that he is staunchly opposed to some of America’s foundational ideals.

The Bible makes clear that God’s Church is not involved with politics of this world. But it describes another church that is. Revelation 17 describes a woman “with whom the kings of the earth have committed fornication” (verse 2). In biblical symbolism, a woman represents a church. God describes His Church as the Bride of Christ in Ephesians 5. But this woman in Revelation 17 is not married to God—she is committing fornication with the major powers of the world.

“This church holds significant political influence with ‘the kings of the earth,’” wrote Mr. Flurry. “Such a description could only apply to one church in human history—a church that has exercised power over many great leaders, that has been deeply enmeshed in national politics and international affairs.” He continued:

When this biblical truth is viewed alongside Pope Francis’s recent activities and statements, it becomes clear why this should deeply concern us all. But most people are asleep to the danger.

Fifty or 60 years ago, no pope would have dared say some of the things this pope has said. Intervening in America’s political system would have provoked a major backlash. Today, it has stirred little more than amused talk about Donald Trump versus the pope.

The pope is a world leader, and he is stirring public opinion against not just the U.S. president but America’s core principles. He clearly preaches against free markets and limited government—core principles of the U.S. Constitution.

Herbert W. Armstrong warned for years that the Catholic Church would play a major role in opposing the U.S. He said that it would help cement Europe into a united power against the United States. “In only one way can this resurrected Holy Roman Empire be brought to fruition—by the ‘good offices’ of the Vatican, uniting church and state once again, with the Vatican astride and ruling,” he wrote (Plain Truth, January 1979). In 2017, Pope Francis called on Europe to come together as a “federal community.”

Just over a week ago, Mr. Flurry dedicated his Key of David television program to the subject of Europe’s influence in Latin America.

In 1962, the Plain Truth, under Mr. Armstrong’s leadership, wrote that “the United States is going to be left out in the cold as two gigantic trade blocs—Europe and Latin America—mesh together and begin calling the shots in world commerce.” What can solidify such an alliance? The Catholic Church is a major part of the common cultural bonds between the two.

America should be very concerned that such a prestigious figure is traveling around the world as a diplomat of anti-Americanism. To learn the reason why, read our free book The Holy Roman Empire in Prophecy.